A Maryland man admitted in federal court Tuesday to leaving a deranged letter on the doorstep of a Biden-Harris supporter in October that said the candidates would be “executed on National Television (sic).”

James Dale Reed, 42, pleaded guilty to a federal charge of making threats against a major candidate for president or vice president and faces up to five years in prison when he is sentenced next month.

About a month before last year’s election, Reed left the threatening letter at the home of someone who had several signs in their yard supporting the Biden-Harris ticket, according to a criminal complaint. 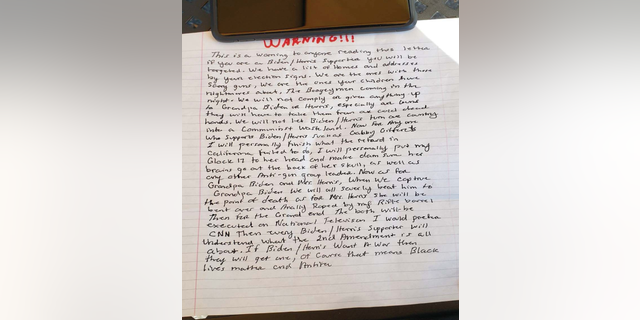 James Dale Reed left this threatening letter on the doorstep of a Biden-Harris supporter in October.
(U.S. Attorney’s Office, District of Maryland)

“If you are a Biden/Harris supporter you will be targeted. We have a list of Homes (sic) and addresses by your election signs. We are the ones with those scary guns. We are the ones your children have nightmares about,” the letter reads.

“I will personally put my Glock 17 to her head and make dam (sic) sure her brains go out the back of her skull,” the letter continued. “When we capture Grandpa Biden we will all surely beat him to the point of death.”

Reed was captured on the homeowner’s Ring camera. Police interviewed him at his home about a week later, and he eventually admitted to writing the letter after initially denying any involvement.

He told investigators that he wrote the letter “because he was upset at the political situation.” 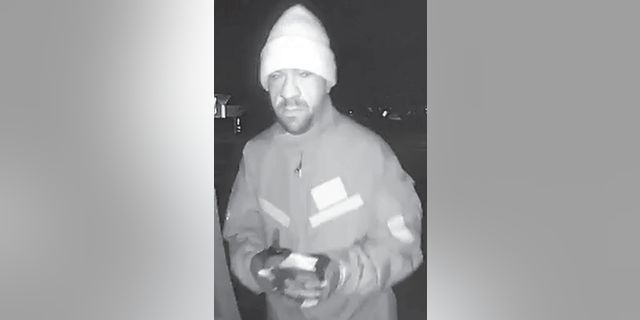 Authorities obtained a search warrant for his home on Oct. 15, where they discovered a room that “resembled a U.S. military outpost bunker” and seized two handguns, two rifles and ammunition.

Prosecutors said in court that two days after writing the letter, Reed traveled to Gettysburg, Pennsylvania, on the same day that then-candidate Biden was campaigning at the Civil War battlefield, according to The Washington Post.

Reed was known to the Secret Service for previously making threatening statements to someone who was under Secret Service protection in 2014, according to the criminal complaint.

He was found guilty in state court of voter intimidation in February and sentenced to time served and three years of probation, FOX 5 DC reports.

Mady Gosselin Takes Down a Troll: Im Gonna Post Whatever I Want!