Thomas Dunn, of Hamilton, is accused of endangering the toddler’s life by putting her in the machine at his flat in Arbroath, Angus, in December 2017.

The child’s mother, who cannot be identified for legal reasons, told a jury at Dundee Sheriff Court she turned around from washing dishes at her friend’s home to see her girl in the tumble dryer.

She broke down in tears as she described the child’s screams after being taken out of the machine.

The witness said: “I was standing doing the dishes and he was joking about putting her in the tumble dryer. I didn’t think that he was being serious.

“I heard a door close and then I heard the rotation and I turned around and I saw her in it.”

“There was no emotion at all”

The mother, who described hearing two “thuds” before Dunn removed the child from the machine, added: “He said he didn’t realise the tumble dryer was on but I heard the flick of the switch.

“I tried to grab her out of the tumble dryer and he wouldn’t let me.”

The mother said her child “wouldn’t stop crying” after she was taken out of the machine.

Asked how Dunn appeared, she said: “There was no emotion at all.

“I was shocked that there wasn’t. I was really angry.”

Dunn denies three charges of assaulting the child between December 2017 and January 2018. 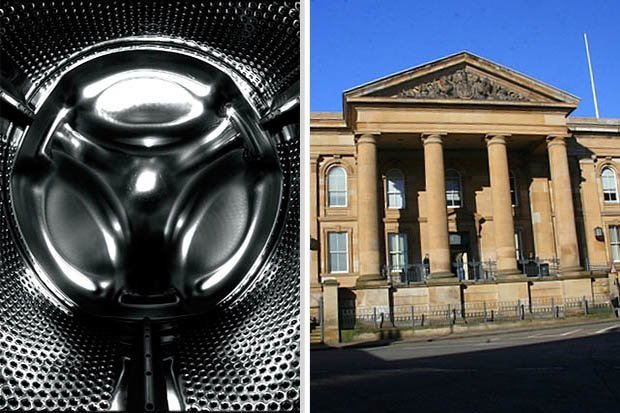 On one occasion he is accused of repeatedly striking her on the head and body, hitting her against an unknown object or objects and biting her on the arm.

The girl was taken by ambulance to Ninewells Hospital in Dundee after being in Dunn’s care on January 8 last year.

The jury heard her mother found out from doctors she had fractures to her skull and she said it was while the child was being assessed she noticed bruises and other marks on her body she had not seen before.

Dunn had messaged the mother earlier that day to say she had hurt her nose after banging into her buggy, the court heard.

During the exchange he wrote: “She’s so miserable since she hurt her nose, it’s a wee shame.”