Washington: A major league baseball game between the San Diego Padres and Washington Nationals was suspended in the sixth inning after police said there was a shooting outside Nationals Park.

Two people were shot, said Dustin Sternbeck, a Metropolitan Police Department spokesman. Investigators believe, based on preliminary information, that one of the victims was an employee at the stadium, he said. 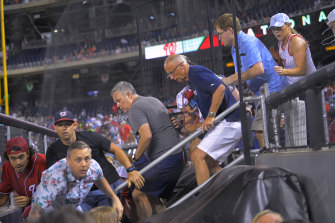 Fans rush to evacuate after hearing gunfire, during a baseball game between the San Diego Padres and the Washington Nationals at Nationals Park in Washington on Saturday July 17, 2021. The game was suspended in the sixth inning after police said there was a shooting outside the stadium. Credit:The Washington Post

More than two dozen police cars, ambulances and fire engines were on the street outside the third base side of the stadium and a police helicopter hovered overhead.

The Padres had just taken the field for the bottom of the sixth on Saturday night (Sunday AEST) when a sound was heard outside the ballpark on the third-base side.

Crew chief Chris Carlson suddenly motioned for Padres players to leave the field and walked to the visitors’ dugout where he appeared to explain to manager Jayce Tingler and others what was happening as he pointed in the direction of the sound.

At the same time, fans began running out of the gate beyond center field while others ran into the stands from the area near where the shots were heard. 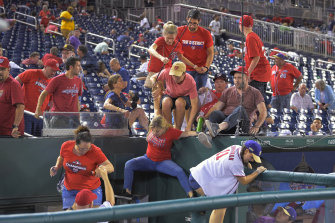 Fans jump into a camera well after hearing gunfire from outside the stadium, during a baseball game between the San Diego Padres and the Washington Nationals.Credit:The Washington Post

Rain was in the forecast and was expected to begin falling imminently, adding to the confusion. Many thought a rain delay had begun.

Just a couple minutes later, there was another loud bang and people all over the stadium began scurrying and ducking. There were yells for people to take cover.

Padres shortstop Fernando Tatis jnr ran onto the field, followed by at least two other teammates. They sprinted down the third-base line and grabbed family members from the stands and ran with them back toward the visitors’ dugout.

A short while later, an announcement over the public address system informed fans “the incident has been reported to be outside the stadium” and urged fans to remain inside the ballpark. Fans later were told they could exit gates beyond the outfield.

About 10 minutes later, the team tweeted: “A shooting has been reported outside of the Third Base Gate at Nationals Park. Fans are encouraged to exit the ballpark via the CF and RF gates at this time.”

The Padres led 8-4 when the game was halted. It will be resumed Sunday afternoon, followed by the regularly scheduled game.