Lukashenko’s brutal torture chambers: The Belarus detention centres where protesters are beaten until they pass out, starved, deprived of sleep and forced to sign confessions in ‘bestial’ conditions

Dissident journalist Roman Protasevich has almost certainly been tortured after his Ryanair flight was hijacked over Belarusian airspace on Sunday.

The 26-year-old’s own coverage of last year’s brutal crackdown by Europe’s last dictator, Alexander Lukashenko, is an insight into the hell that awaits him.

It was his news channel which inspired hundreds of thousands to rally in the streets against Lukashenko – many were beaten in the streets and dragged into police vans on the mere suspicion that they had attended these demonstrations.

Mr Protasevich’s fearless coverage while editor at Nexta alerted the world to the merciless beatings being meted out in Lukashenko’s torture chambers.

Police in balaclavas would hold people for three sleep-deprived days, during which time they suffered electrocutions, stress positions, sleep-deprivation and starvation as guards force them to sign confessions.

The ruthlessness was such that video captured by a witness recorded victims’ screams echoing from prison walls in Minsk at night. 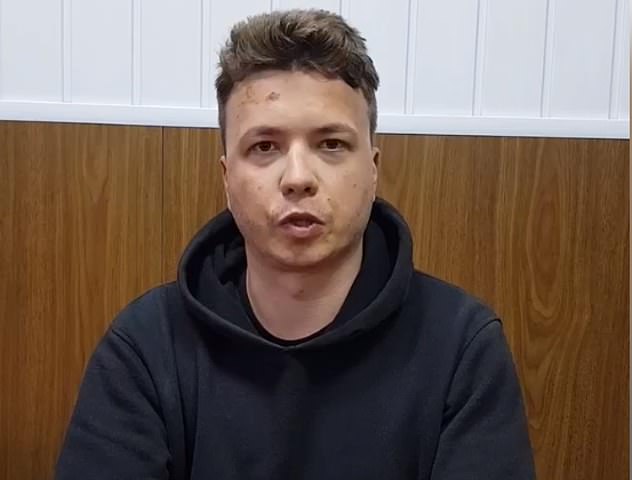 Roman Protasevich during his ‘confession’ broadcast on state TV last night after he was hauled off a Ryanair flight which was hijacked in Belarusian airspace by the air force. He has tell-tale marks on his forehead and his allies say he has ‘almost certainly’ been tortured 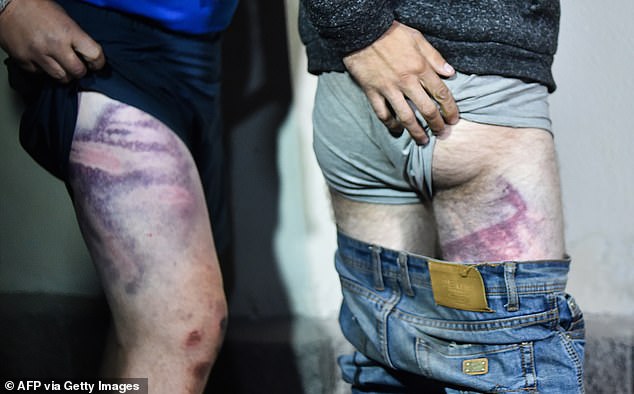 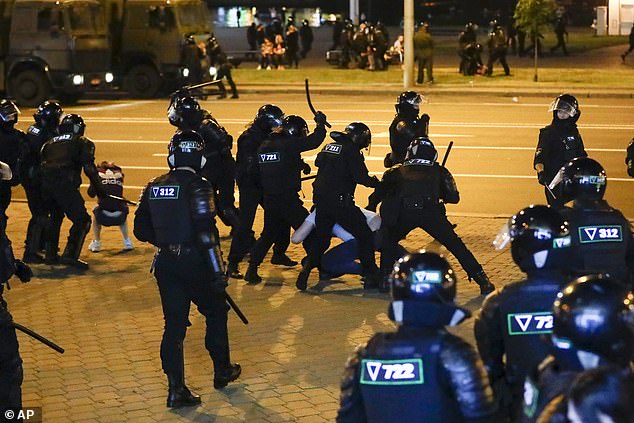 Valery Samalazau, a father-of-three based in the UK who was hauled off the street for wearing the wrong T-shirt

In the summer of 2020, Valery Samalazau was working as an IT specialist in the UK.

The father-of-three travelled to his homeland of Belarus to complete paperwork so that he could vote in the presidential election on August 9.

The following day Lukashenko, who has ruled with an iron fist since 1994, was handed another term in elections widely believed to have been rigged.

Nationwide protests erupted as Mr Samalazau took a trip to see a friend in Minsk.

‘I was walking along the pavement when I was suddenly encircled and questioned,’ he told DW. ‘I answered politely and showed my ID.’

Mr Samalazau happened to be wearing a T-shirt with a skull logo from The Punisher comic book printed on it.

Belarusian police claimed it was a Third Reich symbol and accused him of sympathising with the Azov Battalion, a neo-Nazi group fighting in eastern Ukraine.

The officers also became intrigued as they searched him, finding British bank cards and a SIM card from the UK.

‘They thought they had nabbed the protest organiser,’ Mr Samalazau said.

He was hauled around the back of the train station in Minsk and beaten. 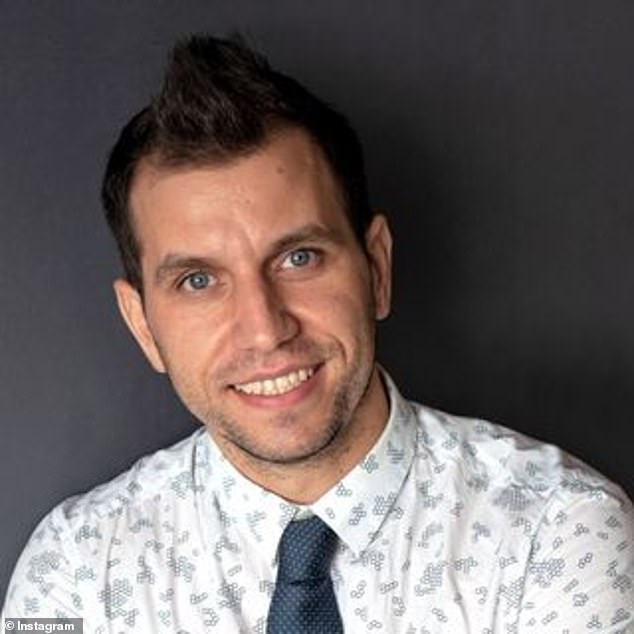 In the summer of 2020, Valery Samalazau was working as an IT specialist in the UK. The father-of-three travelled to his homeland of Belarus to complete paperwork so that he could vote in the presidential election on August 9.

Mr Samalazau was taken into a police van on suspicion of being a ‘foreign spy.’

‘The van is a torture chamber on wheels. Many people screamed, cried, prayed, vomited in it. I lost consciousness twice from pain,’ he said.

His hands were tied behind his back and twisted by the masked men as they whispered in his ear: ‘Apparently, you don’t fear pain…but we will make you suffer.’

His arms went numb below the elbows as the pain became unbearable.

Mr Samalazau begged them to have mercy, telling them he was a father, but they only tightened their grip and he lost consciousness.

They were driven to a prison in Zhodzina, around 30 miles outside the capital, where the other captives were thrown from the van.

But Mr Samalazau was kept in the vehicle and told that he required special treatment.

He was told to kneel and then get up on his feet but he stumbled over.

The officers in balaclavas held him up against the side of the van and battered him around the head, the torso and legs.

‘I was thrown out of the van and made to kneel until they called my surname. Once again, masked officers said they would be paying extra attention to me,’ he told DW.

Kacper Sienicki had travelled from Warsaw to cover the protests against Lukashenko.

He was arrested in central Minsk on August 10 with his photographer and hurled into the back of a police van.

‘Once there, we were beaten and insulted based on our nationality. We were accused of being puppet masters, orchestrating the protest movement and organising a colour revolution,’ he told DW.

They too were taken to the detention centre in Zhodzina where police held them for three days.

Mr Sienicki was beaten inside the van, while his colleague was so brutally treated that he passed out.

The beatings grew in ferocity at the prison, where his hands were tied behind his back and he was made to lie face down on the ground. 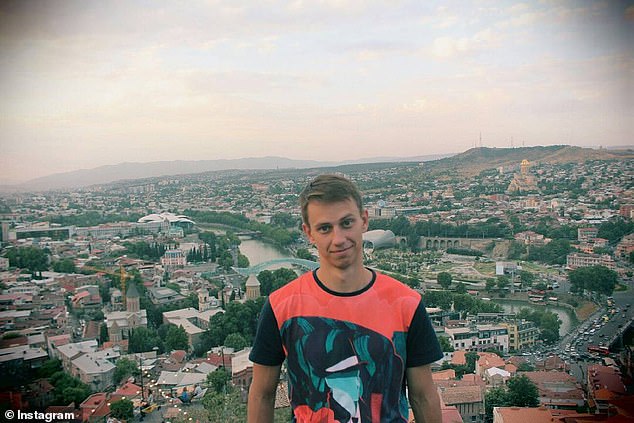 Officers threatened to punch their teeth out and they were made to kneel. Mr Sienicki’s legs went numb at this point.

He said that anyone who cried out during the beaten was struck with a baton.

Masked men wielding baseball bats walked through the hallways filled with bloodstains and screams, leaving him uncertain of the fate he faced.

Yulia Bolievskaya, a 28-year-old patternmaker from Minsk who was working as an independent election observer at a polling centre

Yulia Bolievskaya was an independent election observer working at a local polling centre when police arrested her on August 9.

They took her to a detention centre where they swore at and threatened her.

Officers took away her belongings, including medication which she told them she had to take daily for a chronic illness.

Ms Bolievskaya spent the first night with 12 other women in a cell designed for six.

They heard the screams of torture victims from down the hall and were unable to sleep.

The following evening they were moved to a cell which already had 20 women inside and there was barely enough room to breathe. 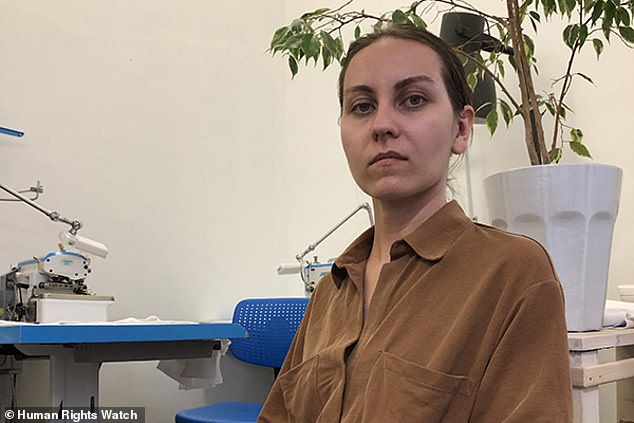 ‘Finally, they opened the door and poured a pail of cold water over us – so, we had to sit on the wet floor in wet clothes,’ she told Human Rights Watch.

One woman lost consciousness but when a doctor arrived he ‘did nothing.’

She was transferred to the Zhodzina detention facility after a summary court hearing where she was sentenced to four days imprisonment.

During her stay there, she was given a few slices of bread and made to stay in another cramped cell with 11 other women where guards made them pay for sanitary napkins.

Alexander Gazimov, 35, a construction worker from Minsk who was out grabbing a kebab when he stumbled into a protest

Alexander Gazimov didn’t vote on August 9 – he was not interested in politics and was hosting a party that night at his home.

The next day he was grabbing a kebab with a friend at a shopping mall and they happened upon protesters who were fleeing the police.

Mr Gazimov started running too, but fell and broke his left leg.

Police arrested him and dragged him into a truck where he was covered in blows across his head and body.

‘They stepped on my broken leg and kicked it [laughing] “Is this leg really broken?”‘ He told Human Rights Watch. 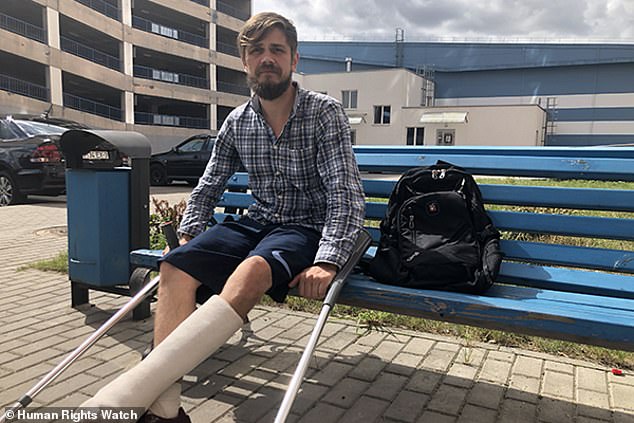 They threatened to shove a truncheon up his anus and made him stand up against the side of the truck with his legs spread wide.

The masked men continued their beatings and split his lip.

‘I started to lose consciousness and so they laid me faced down on the ground. But they kicked my broken leg again… four or five times,’ he said.

The 35-year-old and the other prisoners were made to spend the rest of the day and the night in a prison yard.

In the morning they were transferred to the soon-to-be-infamous Zhodzina facility where charge sheets had already been drawn up for prisoners to sign.

Mr Gazimov was carried in by the guards because he couldn’t walk.

‘There were around 150 [detainees] there… [many] with with injured faces, broken jaws and ribs, blood over them. Some were afraid to speak to the doctor and said they were “OK.”‘ He said.

He spent two days at the prison hospital before he was sent to the Minsk Emergency Hospital for surgery.

Pavel Pogartsev, a 20-year-old student who attended protests in the southwest

Pavel Pogartsev and a friend travelled into the city of Homel on August 11 to attend a protest.

Officers started rushing towards them and they were dragged into a van.

The prisoners were taken to a police station where officers in full riot gear were standing on either side of a dark corridor on the fourth floor.

Mr Pogartsev was made to crawl down the corridor as the officers beat him with their batons, kicking him in the head and knocking him against the wall. 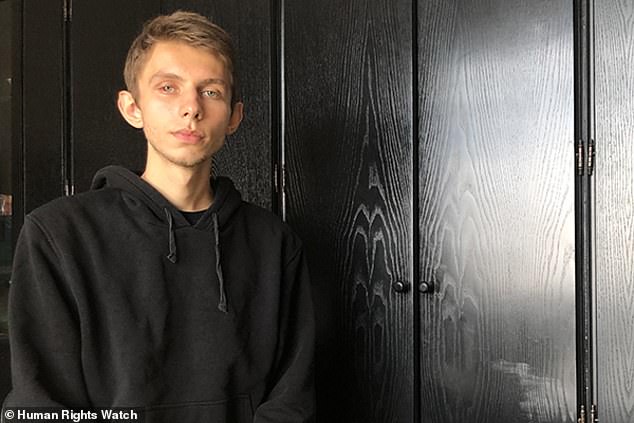 ‘When I was freed three days later, I went to the hospital. I had a concussion and the doctors kept me there for two days,’ Mr Pogartsev said

After the beating he was taken to an interrogation room where he was wrapped across the hand as an officer threatened to break his fingers and toes.

He was ordered to confess to participating in an illegal mass gathering.

The 20-year-old was taken to a hall with other demonstrations and made to lie on the ground.

After 18 hours he was taken to a cell.

‘When I was freed three days later, I went to the hospital. I had a concussion and the doctors kept me there for two days,’ Mr Pogartsev said.