A child has cheated death after a van ploughed into the family home and ended up inside the living room where the youngster was playing.

Emergency services were called to the semi-detached property in Northfield, Birmingham, at 7.14am.

The woman driver managed to scramble to safety by climbing out the back of the VW van and was taken to hospital with minor injuries.

A child who was playing in the living room at the time of the crash sustained minor injuries as did its mother.

Dramatic pictures show the silver van completely embedded in the living room of the house. 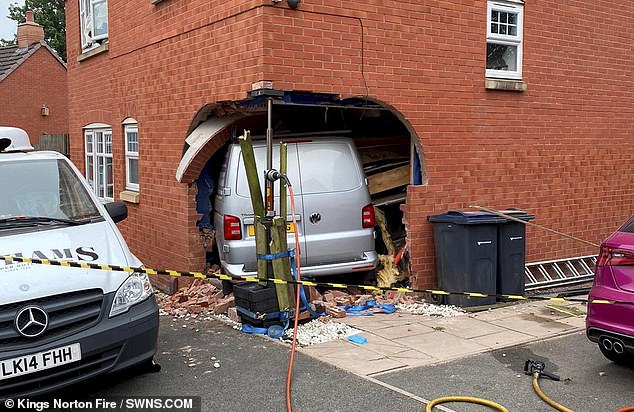 Emergency services were called to the semi-detached property in Northfield, Birmingham, at 7.14am

A West Midlands Ambulance Service spokesman said: ‘When crews arrived at the scene, they found a single van which was inside the property.

‘The driver, a woman, had managed to self-extricate through the back door of the van.

‘She was treated for minor injuries before being conveyed to Queen Elizabeth Hospital in Birmingham for further treatment.

‘Crews also treated a child, who was inside the property at the time of the collision, for minor injuries and they were discharged at the scene.’

Kings Norton Fire Service tweeted: ‘Kings Norton Crew along with @Northfieldfire & @TechRescueWMFS are dealing with a van that has driven into a house.

West Midlands Police added: ‘We are investigating after a van went into a house on Chatham Road, Birmingham, just before 7.30am this morning.

‘A mother and child who were inside the house, have been treated for minor injuries and the driver of the van is assisting us with enquiries.

‘The road is expected to be closed for a number of hours as a suspected gas leak is assessed.’