Los Angeles police have released a startling video in the search for a driver accused of fleeing the scene of a hit-and-run incident that left a grandmother seriously injured.

The 70-year-old victim had the proper signal in a crosswalk when the driver made a left turn and slammed into her on Sept. 4, leaving her with a brain bleed, broken neck and broken pelvis, amongst other injuries, investigators say. Police believe she will recover – but are now offering a $25,000 reward for information leading to the identification, arrest and conviction of the suspect.

“I want to tell the driver to please turn himself in because my mother didn’t deserve to be laying down on the ground without any assistance,” the victim’s daughter, Ramona, told reporters at a press conference Tuesday afternoon. “This person needs to turn themself in. I’m begging you to please turn yourself in.”

Video of the incident released Tuesday shows the woman bring thrown into the air after being struck by the vehicle.

“You see the suspect, wearing a black tank top and black shorts, walk up to the victim after the collision, then walk away and flee the scene,” the Los Angeles Police Department said in a tweet.

Detective Juan Campos said the driver stayed at the scene for around 44 seconds before leaving “without rendering any aid [or] identifying themselves.”

The victim was then rushed to a local hospital’s intensive care unit. 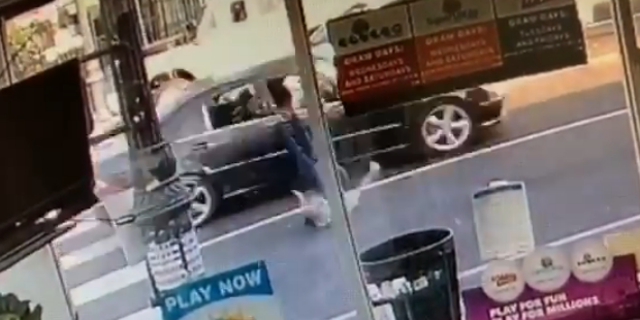 The victim was struck on Sept. 4, police say. (LAPD)

“Thank God she did not die from that incident,” Commander Gerald Woodward told reporters Tuesday.

Police describe the driver as a black male in his late 30s, around 6 feet, 4 inches tall and weighing about 180 pounds. They say he has black hair with bleached tips and a tattoo of the number “1” on the left side of his face.

The vehicle he was driving – a Mercedes-Benz sedan – had temporary license plates, police add.