‘It’s cute that he shut it after!’: Commuters ridicule London traveller who breaks through roadworks barrier blocking his route – but fails to notice a pedestrian walkway yards away

This is the hilarious moment a commuter breaks through roadwork barriers to try to avoid taking a different route near a London station – but fails to notice the walkway full of people immediately next to him.

The embarrassing scene was filmed from a bus near roadworks at Old Street station in Hackney, east London, from the upper deck of a bus before the footage was posted on Facebook.

The video shows a man, who is wearing a rucksack, standing at the red and white plastic barriers before he tries to lift one. 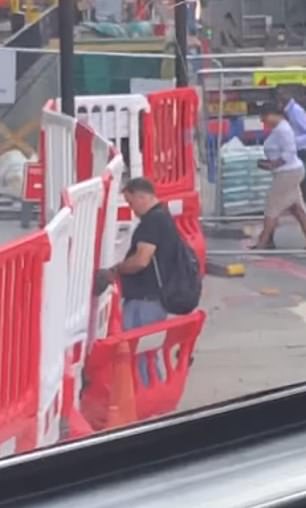 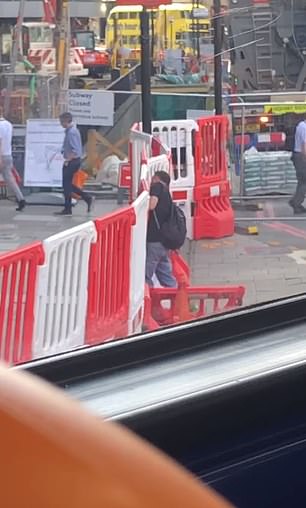 A ‘clever’ commuter who wants to get ahead of a diversion tries to break through roadwork barriers at Old Street station in Hackney. The man fails to notice the walkway behind him which provides a route straight past he blockage

Behind him, commuters can be seen striding past the obstruction via a walkway, which he appears not to have noticed.

His first attempt at lifting the barrier does not succeed because it is attached to those beside it.

But the determined man continues his effort until it finally breaks free and he triumphantly pushes it open.

Commuters walking on the other side of the barriers, perhaps bemused by his efforts, glance at  the man as he breaks through the barriers.

Once on the other side, he pushes the barrier back into place and continues on his way.

Sam Bailey, who posted the video on Facebook yesterday, wrote on his post: ‘Well that’s certainly one way to get around that. Old street roundabout.’ 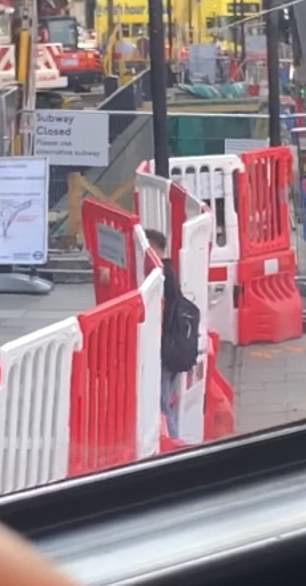 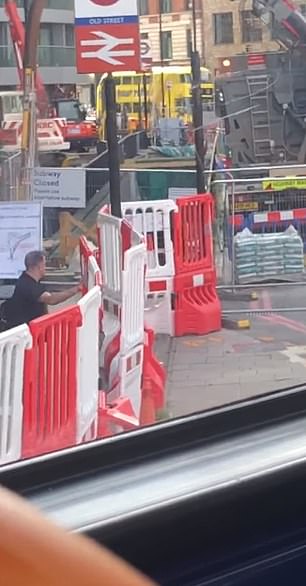 Some people commenting on the video were unforgiving as they branded the man an ‘idiot’ and a ‘twit’, while others gave him credit for his effort.

Valerie Anderson Gaskill wrote: ‘Visual definition of entitlement/stupidity’, while Rob Evans wrote: ‘it’s cute that he shut it after’.

Another, Shaun Barnaby, added: ‘Way too much effort and time.’

And Cheryl Mitchell wrote: ‘Got to give it to him for trying’