The departmental hearing into the alleged chokehold used by NYPD Officer Daniel Pantaleo during Eric Garner’s 2014 arrest, which allegedly led to his death, wrapped up on Thursday. But it will be a little while longer before the presiding judge gives a recommendation for the officer’s future.

It has been almost five years since Eric Garner’s death was captured on three separate cell phone videos. Garner was accused by Pantaleo and his partner, Justin D’Amico, of selling untaxed cigarettes to Staten Island, New York, residents.

Since Garner’s last words, “I can’t breathe,” became a rallying cry for fatal police-involved shootings across the country, Pantaleo has been on desk duty and not criminally charged.

A Staten Island grand jury declined to indict Pantaleo in December 2014 after Garner’s death was ruled a homicide resulting from a fatal cascade of events, according to the city’s medical examiner.

An internal investigation in January 2015 found that Pantaleo used a chokehold — a prohibited takedown method banned by the NYPD since 1993 — in an attempt to arrest Garner, according to witness testimony during the hearing.

Pantaleo has denied wrongdoing and his lawyer argues that he did not apply a chokehold.

The NYPD’s Civilian Complaint Review Board (CCRB) announced in July 2018 that it would conduct this departmental hearing since federal prosecutors with the U.S. Attorney’s Office for the Eastern District of New York had not determined if they would charge Pantaleo.

The feds have until the fifth anniversary of Garner’s death on July 17, 2019, to announce their whether they will proceed before the statute of limitations clock expires. An executive assistant U.S. attorney was spotted at the hearing on Wednesday. The U.S. Department of Justice declined to comment.

The seven-day departmental hearing began on May 13 and lasted until Thursday.

Deputy Commissioner Rosemarie Maldonado will determine within 90 days whether the evidence presented at the hearing equates to criminal charges of first-degree strangulation and third-degree reckless assault.

“CCRB recommends a penalty of termination without his pension. … Officer Pantaleo forfeited his right and privilege to be a police officer in the city of New York,” said Suzanne O’Hare during her closing arguments for CCRB.

“I expect an expedited schedule,” said Stuart London, the lead attorney on Pantaleo’s defense team. “And we have another two weeks to respond to that decision from the police commissioner…in this case.”

Pantaleo, 33, declined to testify on his own behalf during the hearing despite a June 2018 ruling that his testimony couldn’t be used against him in a federal proceedings, said O’Hare.

London read a few sentences of the 75-page transcript from Pantaleo’s December 2014 interview with internal affairs during his closing statements.

“I was just trying to bring him to the ground,” London read from page 40.

Prior to Pantaleo and D’Amico approaching Garner in front of a store in the Stapleton neighborhood of Staten Island, a superior had given them orders to control “quality of life” offenses after a large volume of complaints had been made from local businesses.

Unbeknownst to Pantaleo, D’Amico had a run-in with Garner two weeks earlier about selling loose cigarettes, and no arrest had been made, O’Hare said. During the encounter, Garner became aggravated when D’Amico accused him again of selling cigarettes.

During the escalating verbal confrontation, Pantaleo grabbed Garner from behind in a takedown method that London said is called a “seatbelt maneuver.” London has said the move is taught in the Police Academy. 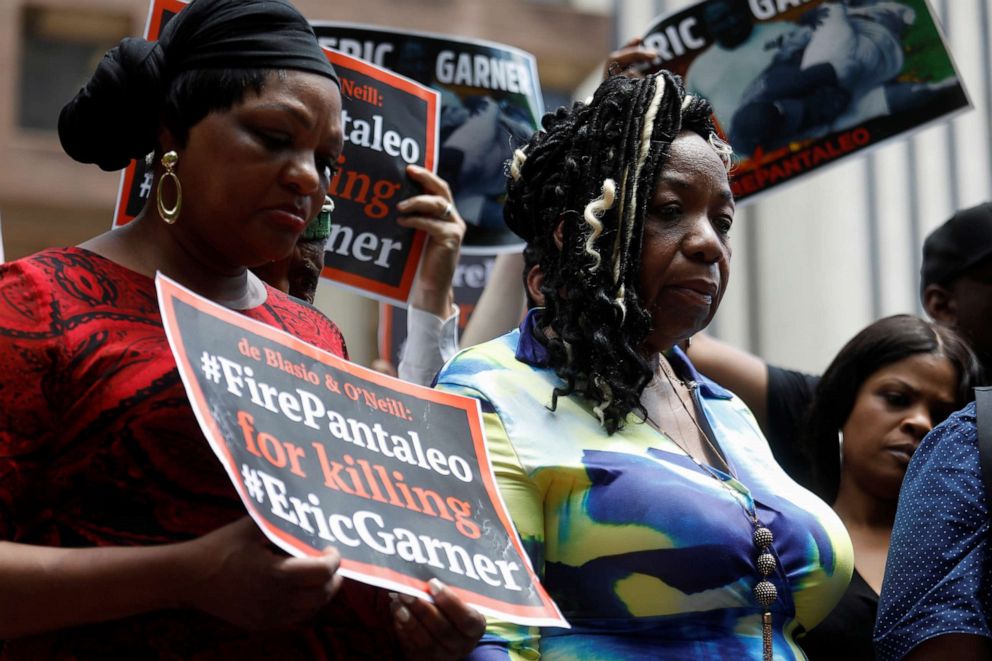 During the hearing, retired NYPD Detective Russell Jung testified for the defense that there’s “a million” tactics police officers aren’t trained to use, but implement them on suspects to make an arrest.

“This is not a free for all. There is a reason for training. You cannot learn something by talking about it in the locker room. If you do it wrong, someone can get hurt or someone can get killed. It is reckless to use this technique without training,” said O’Hare.

During the struggle, Garner lost his footing and Pantaleo’s grip remained by his neck even as they both collapsed to the sidewalk, according to the video footage.

“Eric Garner was off balance until he was taken to the ground as Officer Pantaleo tightened his grip,” said O’Hare. “His arm is around his neck for 15 seconds.”

“No, no pressure to the neck,” London read from page 45 of Pantaleo’s interview when asked about his intentions when he put his arm around Garner. “Just me laying on him to stop him from getting up again. When I heard D’Amico say, ‘We got him,’ that’s when I got up.”

The city’s medical examiner, who administered Garner’s autopsy, testified that the 43-year-old died of events triggered by the actions of Pantaleo’s alleged chokehold and ended with a fatal asthma attack.

Bruising was found in the area on top of Garner’s voice box, said O’Hare.

London vehemently argued that his client’s contact with Garner did not set off a “lethal cascade” that triggered asthma and ultimately caused the homicide.”

“Eric Garner died of his own compromised health conditions…he was obese, he had hypertension cardiovascular disease, that’s why he died,” said London during his closing arguments.

“What we don’t see on the video are the poor responses from the EMTs. They didn’t come over in a rush or with oxygen masks, they did an unbelievably poor job,” said London.

Garner’s family and supporters vehemently oppose Pantaleo keeping his job and are hopeful for a positive result.

“[CCRB] did their job and have proved their case,” said Garner’s mother, Gwen Carr, at a press conference outside of the police headquarters.