A JUDGE was left red-faced after he stood up to accidentally reveal he wasn't wearing trousers during a virtual High Court session.

Superior Court of Justice magistrate Néfi Cordeiro was caught during a panel discussion with his senior colleagues on Tuesday morning in Brazil. 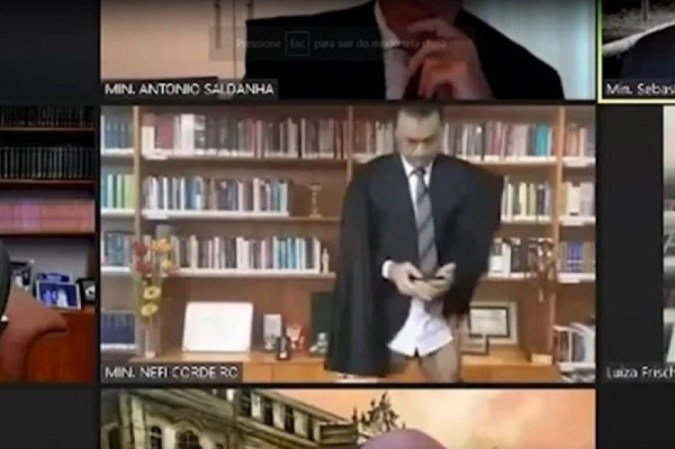 The blunder was made public after a recording of the discussion was broadcast to the judiciary’s official YouTube page.

The blunder was spotted after a recording of the discussion was broadcast to the judiciary’s official YouTube page.

During the call, the judge is seen walking around his desk to get closer to the camera.

The senior official then checks his phone while viewers on the call get a full view of the judge with his legs out.

Cordeiro stands in front of the camera blissfully unaware that he has been recorded without trousers on.

His colleagues appear to watch on and attempt to resume the session as normal.

High court sessions in Brazil have been held virtually since the pandemic disrupted regular proceedings.

The sessions are then shared online to ensure public transparency.

The Superior Court of Justice advisory committee told Otempo News that Cordeiro's office "is aware that this video is circulating on social networks" but said that the magistrate "will not speak out about it."

However, it's not the first time those in senior governmental positions have been caught off guard while taking conference calls during the pandemic.

In June a member of the Christain political party was caught sniffing a pair of women’s underwear during an online council meeting.

Ditinho do Asilo pulled out the knickers that were sent to him in the post during the call where he thought the camera was off.

The politician has tried to explain his bizarre behaviour, saying he had received a present in the mail during the session and had deactivated his microphone when he collected it.

Meanwhile, in August, a couple were left embarrassed after they were spotted having sex during a zoom meeting.

The shamed staff member was caught in the act after he forgot to turn his camera off after the virtual city council meeting in Rio de Janeiro.

The committee meeting, about the Rights of Children and Adolescents, was organised by the city council of the city of Rio de Janeiro, in Brazil’s southeastern state of the same name.