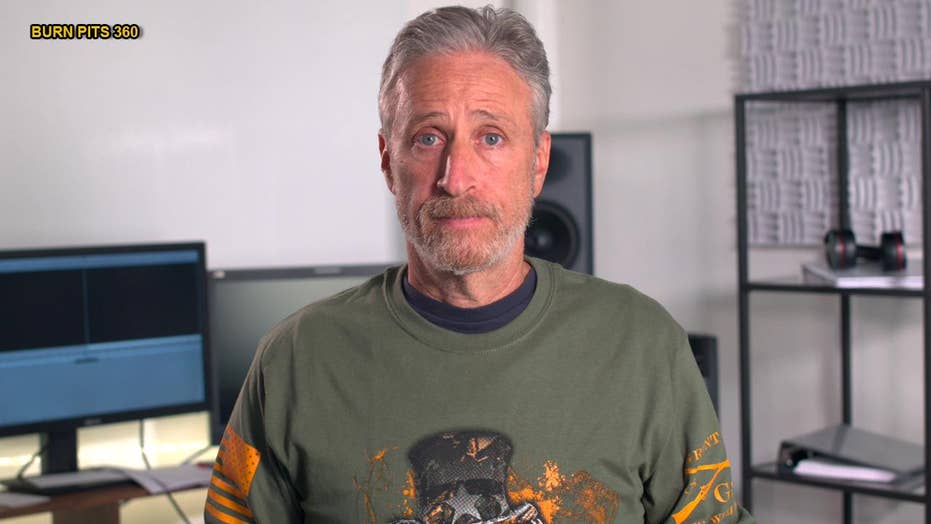 Comedian and advocate Jon Stewart in a new PSA to raise awareness of the issues that veterans exposed to burn pits are facing.

Jon Stewart is at it again.

Over a year after helping 9/11 first responders receive access to a crucial compensation fund, the comedian and advocate has turned his focus toward helping the nearly 200,000 veterans who've said their health was compromised by their exposure to burn pits while serving overseas.

"The parallels are incredible. I'd say the only difference between what happened with the 9/11 community and what's happening with the veteran community is the 9/11 community was injured by toxic exposure from an enemy attack," Stewart said in an interview with Fox News' Investigative Unit.

"The veterans of Iraq and Afghanistan have been injured by the United States. We did this to ourselves. The smoke, the toxins, those pits were dug by contractors hired by the DOD. They knew about it. Their own reporting, internal reporting, shows the air quality, shows the variety of toxins" they were exposed to. 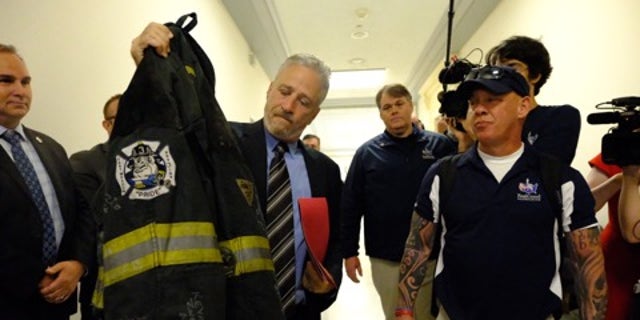 Jon Stewart and Jon Feal (right), who successfully fought for compensation due to 9/11 first responders, are now focusing their efforts to lobby for a new bill that will provide the same sort of relief for U.S. Veterans who claim they were made sick from burn pit exposure.
(The Feal Good Foundation)

On Tuesday, Stewart is heading to Washington with a coalition of other advocates to lobby for the passage of a new bill, which will list burn pit exposure as a presumptive condition for any service member who fought in the wars in Iraq and Afghanistan.

The Presumptive Benefits for War Fighters Exposed to Burn Pits and Other Toxins Act of 2020 is a new bill sponsored by Sen. Kirsten Gillibrand, D-N.Y., and Rep. Raul Ruiz, D-Calif., that would require the Department of Veterans Affairs [VA] to provide health and disability services to Global War on Terror (GWOT) veterans who served in places like Iraq, Afghanistan and other locations where they were exposed to toxins.

"I'm not a doctor, I'm not a scientist. But, I'm also not an idiot. If you live next to a toxic smoke plume filled with cancer-causing elements, and you're breathing it in day in and day out, it's going to make you sick," Stewart said, regarding what many veterans have faced since returning from war.

"Then, you're going to get home and people are going to tell you, just like they did with the 9/11 community, first, 'It's in your head, you're not really sick.' Second, 'OK, maybe you're sick, but had nothing to do with what that was.' And thirdly, they're going to say, 'OK, it is, but I don't know if we can afford all that,'" the former "Daily Show" host added. "You know, this is money. That's it. And, when you've got an F-35 that may never be battle-ready and it's going to be a cost overrun of about $1.4 trillion, and you're gas-lighting your own veterans on their health conditions because you don't want to pay for it? Criminal, and it has to stop."

The bill also would establish a new list of diseases resulting from a veteran's service as a presumptive condition. Under the proposed law, some of the medical conditions included on the list include asthma, chronic obstructive pulmonary disease [COPD] and cancers of any type.

The Investigative Unit at Fox News has reported extensively on the fears that veterans have been made sick by exposure to fumes from burn pits. Many soldiers said the pits were a crude method of incineration in which every piece of waste was burned, including plastics, batteries, appliances, medicine, dead animals and even human waste. 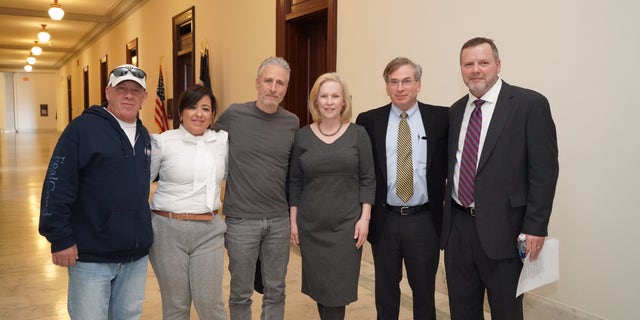 Feal and Stewart recently have partnered with veterans advocate Rosie Torres (second from left) to lobby for a new bill sponsored by Sen. Kirsten Gillibrand (center) that would list burn pit exposure a presumptive condition for veterans who served in Iraq and Afghanistan.
(Burn Pits 360)

The items often were set ablaze with jet fuel as the accelerant. The pits burned more than 1,000 different chemical compounds day and night. Most service members breathed in toxic fumes with no protection. According to a registry created by the VA, over 200,000 vets said the exposure made them ill, but the department denied assistance to many of them.

Rosie Torres, who founded Burn Pits 360 after her husband, Le Roy, returned from service and became ill, said the decade she's been lobbying in Washington has been nothing short of an uphill battle.

"Facing the system of delay and deny and meeting all of these other families that were experiencing the same lack of health care and lack of answers… it became just such an insane rollercoaster," Torres told Fox News. "Immediately after discovering that there was this whole other online community of people that were sort of scratching their heads and saying,  'I wonder why my loved one died? I wonder why my husband or wife are also suffering from these symptoms.'"

"At the same time of us dealing with job loss, and houses being foreclosed, and marriages being crushed… suicides. It's just such a unique situation. Right? Where I've, beside the 9/11 community, hadn't really heard of."

Torres recently has formed a coalition with Stewart and his longtime partner in advocacy, John Feal of the Feal Good Foundation, in the hopes that they could build upon the momentum gained from successfully lobbying for the 9/11 compensation. Veterans and 9/11 first responders joined the group in Washington this week, in a united effort.

"I said it a million times when we were getting legislation passed for 9/11 responders: We have the Mariano Rivera of advocacy," John Feal told Fox News. "That's Jon Stewart. That's a voice [that] extends past Rosie's voice or my voice or other grass-roots activism."

He continued, "I've never seen no [other] celebrity get their hands dirty or have blisters on their feet from walking the marble hallways of Congress." 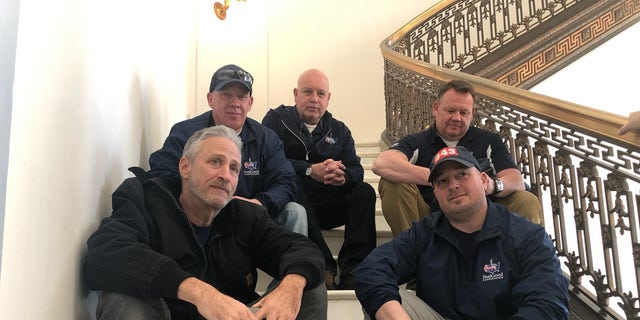 Stewart himself said he thought lawmakers should take even more measures into consideration. He suggested in a Washington Post interview earlier this year that military contractors such as Kellogg, Brown, and Root (KBR) should contribute to a contingency plan, similar to the money that oil companies paid in advance of potential spills or other environmental damage.

"If our own government won't find the money to take care of these individuals, shouldn't the people that profit off of war, off of our soldiers' selflessness, shouldn't they be held at least partially responsible for the inevitable consequences of prosecuting those wars?" Stewart asked. "Oil companies have to kick into a fund for potential spills. Right? And can be held liable for potential spills, for negligence. Why aren't war profiteers held to the same standards?"

He added, "So, if this is about money, I think I know where we can get some of that money."