Washington: Joe Biden will unveil a group of scientists and experts to help him craft a plan to tackle the coronavirus pandemic on Monday.

Biden announced his plans to launch the COVID-19 task force during remarks at his victory party Saturday night. 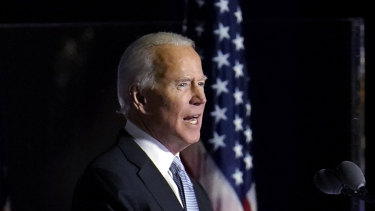 He said those advisers would help him take the proposals he’s released during the campaign for dealing with the pandemic — which include investments in personal protective equipment and loans for small businesses as well as plans to implement more standardised public health guidelines — and turn those proposals into a “blueprint” that he will enact when inaugurated president next January.

Biden said the plan would be “built on bedrock science” and “constructed out of compassion, empathy and concern.”

Biden made President Donald Trump’s mishandling of the pandemic a central focus of his campaign and pledged that his top priority as president would be managing the virus.

Earlier, Biden said that even before the inauguration he would reach out to Anthony Fauci, the country's top infectious-disease expert, asking him for advice. 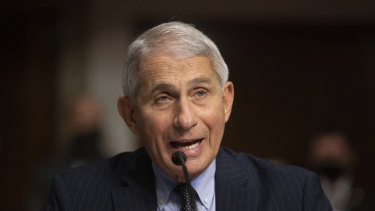 Dr Anthony Fauci is attacked during the debate. Credit:AP

Biden said that “our work begins with getting COVID under control” , adding Americans “cannot repair the economy, restore our economy or relish life’s most precious moments” without doing so.

Nearly every state in the nation is witnessing a resurgence of the virus as the United States this past week logged its first day with more than 100,000 new cases. The seven-day average for new COVID-19 cases exceeded the 14-day average in 47 states Thursday, according to data from Johns Hopkins University.

However, in Biden's home state of Delaware, multiple steps to contain the coronavirus led to drops of more than 80 per cent, according to a new report from the Morbidity and Mortality Weekly Report, a publication from the US Centres for Disease Control and Prevention.

The report analysed the timing of 9762 new cases between March 11 and June 24 and these public health measures: investigation of identified cases, stay-at-home orders, a public mask mandate and contact tracing.

The report also found that, from late April to June, incidence declined by 82 per cent, hospitalisation by 88 per cent, and mortality by 100 per cent as masking and contact tracing were added to the other steps. The impact on incidence occurred weeks after changes, the report said, because new cases resulted from earlier exposures.

Cases were contacted a median of eight days after testing positive. That may have led them to forget whom they might have been exposed to, which added to the risk of transmission. Eighty-three percent of interviewed patients either refused to disclose contacts or said they couldn't remember.