Jeremy Hunt today denied briefing that the UK wants ‘Swiss-style’ ties with the EU after a furious backlash from Tory MPs.

The Chancellor insisted he had not ‘set hares running’ and did not support ‘compromising’ on free movement, accepting Brussels rules or paying into the bloc’s coffers.

However, he seemed to acknowledge that he might be the source for a Sunday Times story that caused a storm among fellow Conservatives.

The paper reported that senior figures in Government wanted to move over the next decade to a relationship with the EU similar to that enjoyed by Switzerland.

While not a member of the bloc, Switzerland has access to the single market and is part of the visa-free Schengen zone under a series of bilateral agreements.

It also makes billion-pound ‘cohesion’ payments to Brussels and accepts freedom of movement. 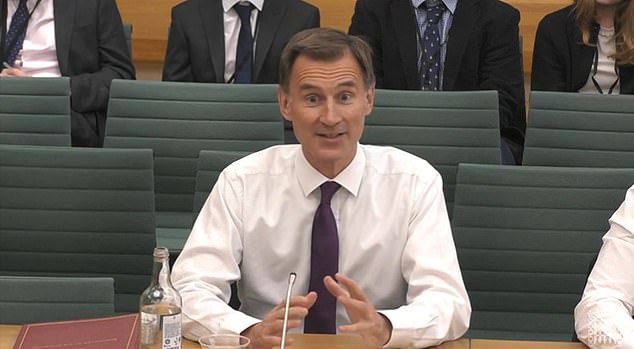 Chancellor Jeremy Hunt insisted he had not ‘set hares running’ and did not support ‘compromising’ on free movement, accepting Brussels rules or paying into the bloc’s coffers

Grilled on the claims as he appeared before the Commons Treasury Committee this afternoon, Mr Hunt said: ‘We support the trade and cooperation agreement, we think it is an excellent agreement that was negotiated by Boris Johnson and David Frost.

‘We do not support, we would not contemplate, I do not support, I have never contemplated any agreement which means moving away from the TCA (existing trade deal), that means we are not negotiating or deciding the regulations that we want as sovereign equals, paying unnecessary money to the EU or indeed compromising on freedom of movement.

‘That has always been my position as Chancellor.

‘With respect to the story in the Sunday Times, if you’re saying was the Treasury, was I, the source for any suggestion we should seek to renegotiate the TCA to move it towards an agreement more like the agreement with Switzerland, the answer is no.

‘If you are saying do I believe that we could remove the physical barriers to trade in the way that happens on the Franco-Swiss border, the Norway-Sweden border, maybe in a way that is relevant for the N I P issues … that’s been my public position for some time.’

Pressed that he seemed to be accepting he was the source of the story, Mr Hunt said: ‘I am not and the Treasury is not the source of any suggestion that we want to move away from the TCA (Trade and Co-operation Agreement) or not have sovereign control of our regulations,’ he said.

‘If you are saying ‘do I believe that technology can reduce barriers to trade’, yes I do and I think that could be a very important way forward. ‘In the context of people saying Brexit trade barriers are the cause of our problems, my answer is I think technology will be a solution.’

Treasury Committee chairwoman Harriett Baldwin told him: ‘It sounds like the hares that suddenly set off onto the front page of The Sunday Times may have started their run from the Treasury.’

Mr Hunt said: ‘I think you would have to talk to the Sunday Times, but I want to be clear about what I have said in public and in private and be absolute clear that my position and the Government’s position has been and has always been to support the TCA, full regulatory independence and I think you can look at the autumn statement to see that is what I believe, because it’s what I actually did.’

He added: ‘I can rule out any suggestion that it has ever been the Government’s intention to move away from the TCA, to move to a situation where we don’t have full control of our regulations, to compromise (on) freedom of movement – I can absolutely say that has never been our position and we have not set those hares running, no.’

Speaking at the CBI annual conference in Birmingham on Monday, Mr Sunak said: ‘On trade let me be unequivocal about this: under my leadership the United Kingdom will not pursue any relationship with Europe that relies on alignment with EU laws.

‘I voted for Brexit, I believe in Brexit, and I know Brexit can deliver and is already delivering enormous benefits and opportunities for the country – migration being an immediate one where we have proper control of our borders and are able to have a conversation with a country about the type of immigration we want and need.’ 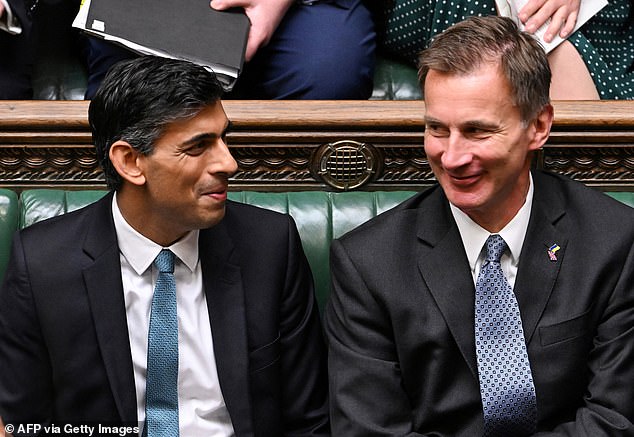 The row erupted after a senior Government source told the Sunday Times the Swiss model would involve more liberal EU migration – although full free movement would not be on the table – and payments to the Brussels budget.

Backbenchers had demanded a bucket of cold water from the PM – a Brexiteer in 2016 and the Chancellor, who backed Remain.

Many were alarmed that such an approach would cost them Leave-backing voters at the next election.

Asked whether rejoining the single market would boost growth, the Chancellor replied: ‘Having unfettered trade with our neighbours and countries all over the world is very beneficial to growth. I have great confidence that over the years ahead we will find outside the single market we are able to remove the vast majority of the trade barriers that exist between us and the EU.’