Hollywood star Jennifer Lawrence has accused a ‘radical wing’ of the Republican Party’ of ‘cheating’ by working to pass stricter voting rules, in a YouTube PSA for the non-profit RepresentUs.

The Hunger Games star is on the board of directors for the organization, whose website states that their goal is to ‘bring together conservatives and progressives to pass laws to fix our broken elections,’ and to ‘end political corruption, extremism, and gridlock.’

‘Whatever your personal politics are, whatever side of the aisle you find yourself on, you need to know that your vote matters and the outcome of our elections are not maneuvered and manipulated,’ Lawrence said in the YouTube clip uploaded to RepresentUs’ account.

‘In Texas, Georgia and Florida and 44 other states, there’s a radical wing of the Republican Party that is actively dismantling America’s right to vote because they don’t have the numbers to win otherwise.’ 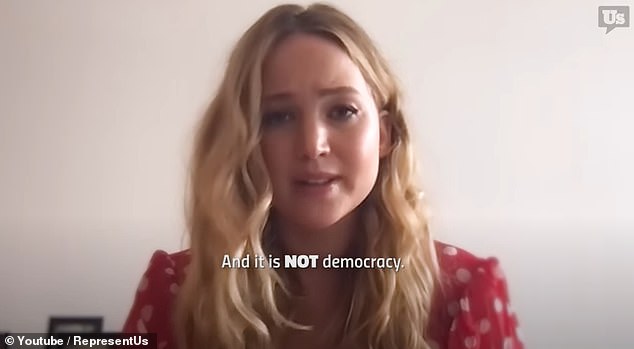 ‘Without Gerrymandering or shutting down hundreds of voting facilities within reach of minorities, and specifically targeting and carving out people of color, they can’t win. But this is cheating and it is not democracy.’

The 30-year-old liberal and RepresentUs are fighting on behalf of the For the People Act, otherwise known as S.1 or HR1, which intends to ‘expand voting rights, change campaign finance laws to reduce the influence of money in politics, limit partisan gerrymandering, and create new ethics rules for federal officeholders,’ according to the piece of legislation.

‘House Democrats are committed to advancing HR1, the For the People Act – a transformational anti-corruption and clean elections reform package – in the 117th Congress,’ according to Congressman John Sarbanes website.

‘We will clean up corruption in Washington, empower the American people and restore faith and integrity to our government. HR1 will get us there,’ the US Representative serving Maryland’s third congressional district writes.

The popular actress’s support of the For the People Act bill could lead to the largest overhaul of US election law in decades, with changes including requiring states to automatically register eligible voters while offering same-day voter registration.

The bill would also make it mandatory for states to offer 15 days of early voting along with no-excuse absentee ballots, according to Fox News, which reports that 14 states would be forced to apply if the For the People Act legislation were to pass.

‘There’s a law in the Senate right now called the For the People Act and it can reverse these anti-voting laws and it can stop billionaires from being able to buy our elections,’ Lawrence added. ‘It even says that all voting machines need to be made here in the U.S. But it’s going to take a lot of pressure from us to get it to pass.’ 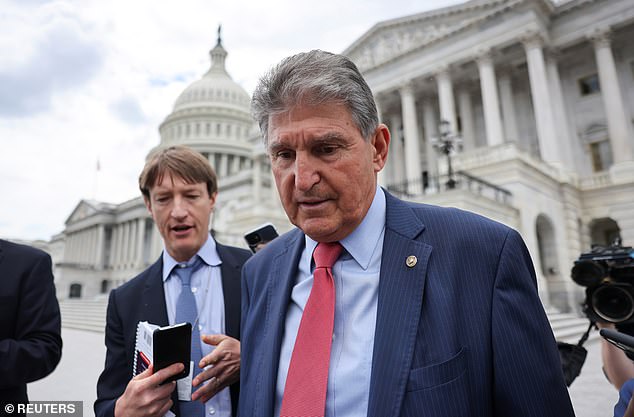 Pictured: U.S. Senator Joe Manchin (D-WV) said last week that he will vote against the ‘partisan bill, ‘It’s the wrong piece of legislation to bring our country together’ Manchin said of S.1

‘Let the politicians bicker and throw tantrums, let’s just make sure they remember who they work for,’ Lawrence ended with in the video clip.

Lawrence and RepresentUs will have an uphill battle in getting the piece of democratic legislation passed, with West Virginia Sen. Joe Manchin revealing last week that he will vote against the ‘partisan bill,’ according to Fox News.

‘It’s the wrong piece of legislation to bring our country together and unite our country, and I’m not supporting that because I think it would divide us more. I don’t want to be in a country that’s divided any further,’ Manchin explained on Fox News Sunday.