Kushner reached UAE on Monday on an El Al plane, the first-ever commercial flight between Israel and the Gulf state. 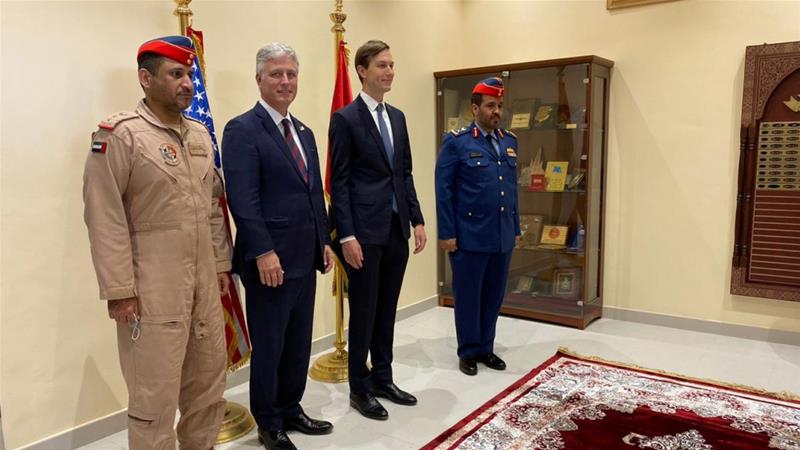 President Donald Trump’s son-in-law Jared Kushner and other US officials have visited a major US airbase in the United Arab Emirates.

Kushner on Tuesday also spoke to Emirati pilots on the tarmac, near the advanced F-35 fighter jets the UAE hopes to buy from the US as it normalises relations with Israel.

His visit to al-Dhafra airbase came just before the El Al flight that had brought the US-Israeli delegation to Abu Dhabi was set to return.

The US delegation arrived in the UAE on Monday in the first-ever direct commercial passenger flight between Israel and the Gulf state.

The flight followed an agreement brokered by the Trump administration last month that saw the two countries establish diplomatic relations.

While at the base near Abu Dhabi, Kushner and US National Security Advisor Robert O’Brien met Emirati Major-General Falah al-Qahtani, a top defence official.

“The reputation of the Emirati armed forces has gone worldwide,” O’Brien said. “It is one of the most capable forces in the world and we are proud to partner with you and serve side by side with you.” 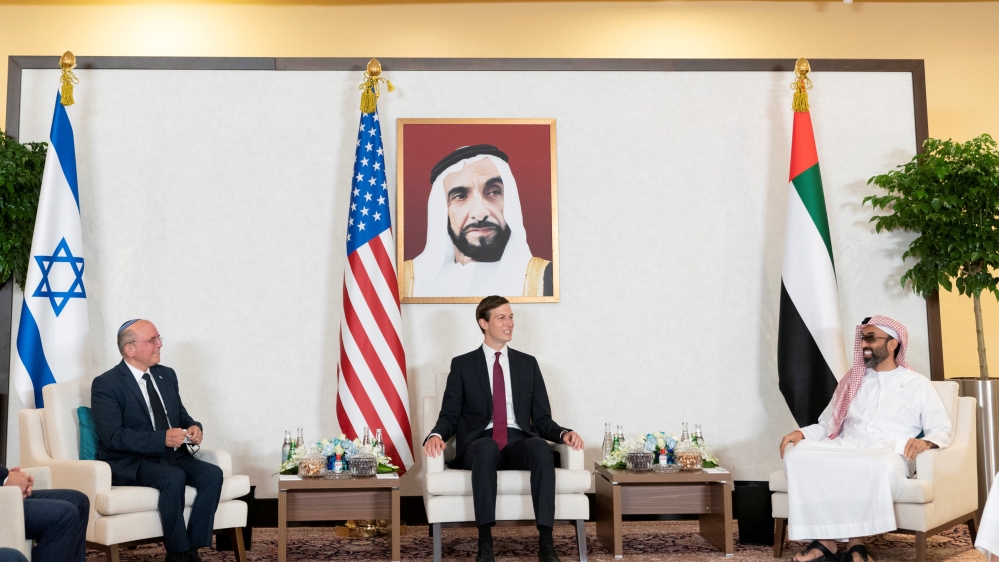 O’Brien added that the US expected a “significant security aspect” in the Israel-UAE normalisation, without elaborating. Journalists also toured a joint command centre run by both the US and the UAE at the site.

Kusher, not wearing a face mask amid the coronavirus pandemic, shook hands with the US and Emirati pilots gathered for the event. He also left a written message at the base.

“May the relationship with America continue to grow and together, through strength, will benefit as we bring more peace and prosperity to the Middle East and beyond!” he wrote.

The journalists’ visit to Al-Dhafra indicates a change in the relationship between the two countries as the UAE has become more willing to acknowledge the US presence in a country that hosts some 5,000 US troops.

Despite long cooperation, the US military for years had only vaguely referred to al-Dhafra as a base in “southwest Asia”.

The US established defence deals with the UAE, a federation of seven sheikhdoms on the Arabian Peninsula, amid the 1991 Gulf War.

Emirati special forces were deployed to Afghanistan after the 2001 US-led invasion that followed the September 11 attacks.

Al-Dhafra has hosted the F-35 for years, as well as surveillance aircraft, armed drones and refuelling planes.

The US delegation’s visit to the base during this tour suggests the F-35 sale remains a key part of the deal.

The UAE has touted the normalisation deal as having included an agreement by Israel to suspend its contentious plan to annex parts of the West Bank sought by the Palestinians for their future state.

It may also help the UAE acquire advanced US weapons systems that have been previously unattainable, such as the F-35 fighter jet.

Currently, Israel is the only country in the region with the stealth warplanes.

The Palestinians, however, have fiercely opposed the normalisation as peeling away one of their few advantages in talks with Israel.