Two brothers who were gunned down by police after charging at officers with weapons at a Victorian campground have been jailed.

Dramatic bodycam vision played in the Victorian County Court showed then 19-year-old Joel Clavell being shot by multiple officers while running at police with an axe in June last year. 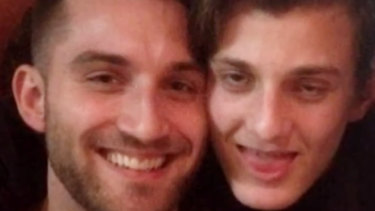 Joshua Clavell, left, and his teenage brother Joel were shot by police at the Victoria-NSW border in June.Credit:Nine News

His older brother, Joshua Clavell, 31, was shot after ramming his Holden Barina into the police, exiting the vehicle and wielding a long knife as he ran at an officer.

Both men pleaded guilty in November last year to assaulting and threatening to kill officers near Barnawartha North, close to the Victoria and NSW border.

Joshua Clavell was sentenced to four years and eight months in prison, and will be eligible for parole in three years. He will have his driving licence suspended for two years upon release.

Joel Clavell was jailed for 21 months, but having served 460 days of presentence detention he will likely be out in less than six months.

County Court judge Martine Marich found on Monday that the brothers continued to hold animosity towards police, stemming from the death of their father who shot himself during a 12-hour siege at an Adelaide brothel in June 2014. 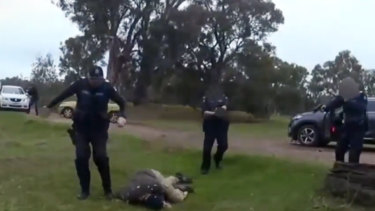 Joel Clavell after he was shot by police.Credit:Police Media

The court heard the trauma of that incident had solidified into an ongoing hostility that the brothers had continued to express while in prison.

Judge Marich said police had attempted to negotiate a resolution with the younger brother, Joel Clavell, as his older brother lay on the ground bleeding.

“You positioned yourself behind the police vehicle where you continued to threaten members and refused to disarm yourself,” Judge Marich said.

“You challenged police to shoot you, declaring that you wanted to be a martyr and called police ‘dogs’ and ‘mutts’ and declared your intention to have them put their guns down so that you could attack them and chop their heads off."

Leading Senior Constable Steven Ireland, one of the officers who shot Joel Clavell, said that since the incident he had experienced symptoms of post-traumatic stress disorder, insomnia and an inability to concentrate on simple tasks.

The bothers, who were Muslim converts, had been at the Barnawartha North camp for the holy month of Ramadan.

At Monday's hearing, the pair smiled and joked with each other over videolink before their sentencing began. They were then cut off by the County Court tipstaff.

Police had originally pursued Joshua Clavell, who was wanted on a warrant for breaching a community corrections order. Police spotted the brothers in a car at a nearby Barnawartha North service station and followed it.

Counter-terrorism officers were present at the stand-off in 2019, but there was no evidence the brothers' offending was motivated by religious ideology.

The most important news, analysis and insights delivered to your inbox at the start and end of each day. Sign up here.