Mr Salvini had been asked to tone down his anti-EU rhetoric after being summoned by Prime Minister Giuseppe Conte for a joint meeting with his Five-Star Movememnt counterpart Luigi Di Maio. During the meeting, Mr Salvini, who heads up the League party which shares power with Five-Star, vowed to put Italians first after the fragile coalition agreed the need to avert EU sanctions over its worsening public debt.

The trio agreed “to draw up a strategy to be adopted in discussions with Europe so as to avoid an infringement procedure for the country, and to set up a shared budget package”.

But Mr Salvini ignored his prime minister and went on tha attack in a post-meeting press conference.

The right-winger blasted: “We don’t need to ask Germans, Spanish and Luxembourgish for money. We want to use Italians’ money for Italians.”

He added that there was no sense in staying in government “to only grow a few decimal points”, suggesting he is still willing to increase public spending beyond the EU’s three percent of GDP deficit rules. 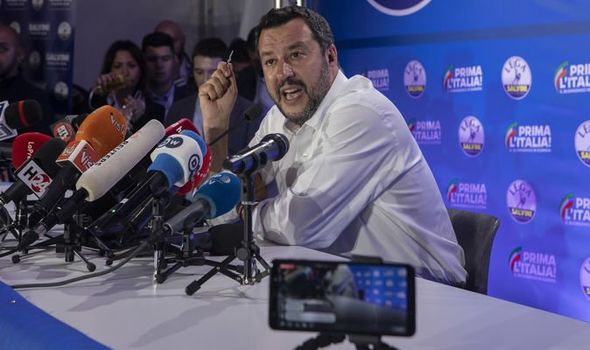 Last week the Brussels-based executive said the action against Italy was “warranted” after losing faith in Rome’s ability meet its 2.04 percent deficit target.

Eurocrats have instead projected that the figure will be closer to 2.5 percent, which still falls under the EU’s 3 percent debt ceiling.

Italy could face multi-billion euro fines or EU officials taking over its finances unless its debt brought under control.

In response, there is growing momentum in Rome to develop a “currency” to rival euro.

The governing coalition – League and Five Star Movement – want to introduce a new government bond, which would be used to pay off the state’s debt to companies and individuals.

The so-called “mini-bot” scheme creates bonds of small dominations – less than the current lowest, which is €1,000.

The scheme was drawn up by League and endorsed by the lower of house of parliament last month in a non-binding vote.

Claudio Borghi, a senior League economic adviser, is spearheading the project for Mr Salvini, and has even mocked up images of what the new currency could look like.

He wrote on Twitter: “The 100 euro mini-bot front and back as we imagined it here, on twitter, in the sunlight.

“With a vote that saw Enrico Mattei and his Urbino prevail over Camillo and Adriano Olivetti, Pietro Ferrero and Giovanni Agnelli.”