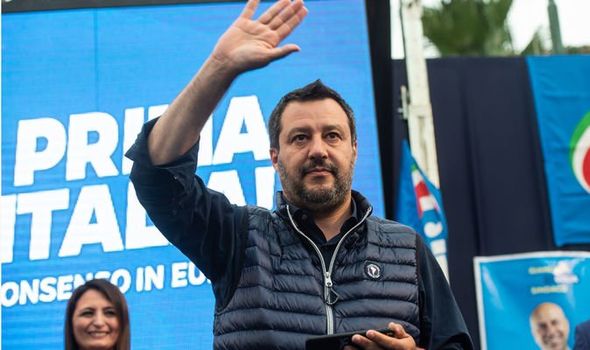 Mr Salvini, who is also the leader of the far-right League party, told a rally on Saturday: “I will tell Brussels this: Let us do what the Italians are asking us to do: fewer taxes and more jobs.

“And if they say ‘No,’ we will see which one of us is the most stubborn of the two.”

The Commission wrote to Italy last week asking its ruling eurosceptic coalition to explain why its already massive public debt had risen in 2018 instead of falling as required.

Under EU rules, it is required to shrink the deficit by 0.6 percent of gross domestic product (GDP) every year until it is in balance. But Italy’s public debt has been rising every year since 2015.

The League has ramped up its anti-Brussels rhetoric since it came out on top in last week’s European parliamentary elections, with Mr Salvini insisting that Rome should slash taxes to boost growth rather than abide by “obsolete” EU fiscal rules that could stunt economic growth.

Mr Salvini also told his supporters that the Commission could fine Italy 3billion euros for breaking EU rules due to its rising debt and structural deficit levels.

Others in Rome appear to disagree with Mr Salvini’s tough position, saying the government would respect the bloc’s fiscal rules in its next budget.

In his response to the Commission, Italy’s Economy Minister Giovanni Tria said he hoped Rome could reach a “compromise” with Brussels and avoid sanctions over its worsening public finances. 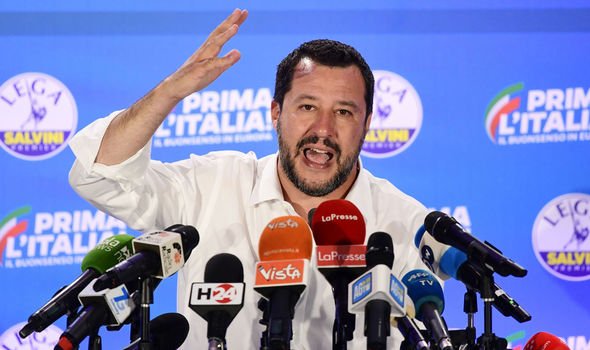 “Italy does not want to clash with the European Commission, and I hope the opposite is also true, that is to say that no one in Brussels intends to engage in a fight with us,” Mr Tria said on the sidelines of a ceremony at the presidential palace in Rome on Saturday.

“Our position is reasonable and I think we will eventually reach a compromise with the Commission,” he continued, as he blamed the high debt on the sluggish economy.

He also reiterated a promise that the 2019 budget deficit would be below a government forecast of 2.4 percent of GDP – a level the Commission has already slammed as too high.

But a report in Italy’s La Repubblica daily on Sunday said that a disciplinary procedure against Italy this week was “almost inevitable” unless the government can come up with concrete, convincing measures to keep its debt and deficit in check.

The bloc’s Economic Commissioner Pierre Moscovici also weighed in on Rome’s budget crisis on Sunday, insisting that he favoured dialogue over sanctions as a means to enforce the bloc’s fiscal rules.

“For the past five years, I have not punished anyone,” Mr Moscovici told France Inter radio when asked about Italy’s finances.

“If they do not respect the rules at all, it will be necessary for the European Commission and the European states to take their responsibilities. Europe is also a co-ownership, there are rules that everyone must respect.

Under EU law, the Commission must warn member states in writing when they fail to abide by agreed fiscal targets. These require them to keep the headline deficit below 3 per cent of GDP and debt below 60 percent of GDP.

Brussels will now take into consideration “relevant factors” that Italy believes may have contributed to the fiscal deterioration. If the Commission says they are insufficient, it will start disciplinary action.