An online fundraising page for former Wallabies full-back Israel Folau has been taken down.

GoFundMe said the rugby star had violated its terms of service by promoting the “discrimination or exclusion” of LGBT people.

Folau set up the crowdfunding page after his £2.2m contract was terminated in May because he had written posts on Instagram saying that all homosexuals would go to hell.

He was seeking to raise £1.6m to fund his legal battle against Rugby Australia, which fired him over the controversial remarks.

Thousands of people had donated more than £400,000 when his GoFundMe page was active, but this money is now going to be refunded.

In a statement, GoFundMe Australia’s Nicola Britton said the campaign had been found to violate the platform’s terms of service.

She added: “As a company, we are absolutely committed to the fight for equality for LGBTIQ+ people and fostering an environment of inclusivity.

“While we welcome GoFundMes engaging in diverse civil debate, we do not tolerate the promotion of discrimination or exclusion.” 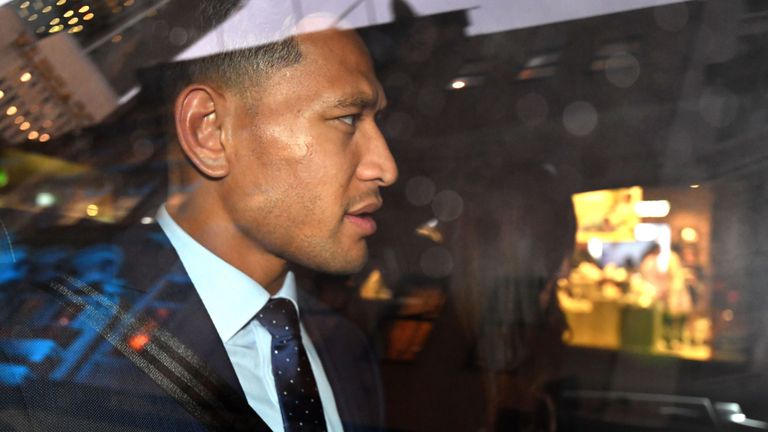 Prior to posting the comments, Folau was expected to be one of Australia’s top players at this autumn’s World Cup in Japan.

The 30-year-old says his comments represent his Christian faith, and claims his termination amounts to religious discrimination.

In a statement over the weekend, Folau said: “My faith defines me as a person. I do not believe that it is fair or right that I be punished for my religious beliefs.”

He added that he had already spent £55,000 of his own money on the ongoing case against Rugby Australia.

“I know I am putting myself on the line – this action will be very costly in terms of time, money and reputation – but I do not intend to stop now,” Folau said.

He has been criticised for setting up the crowdfunding page, with former teammate Drew Mitchell comparing Folau’s case to GoFundMe pages launched to fund medical bills.

Mitchell wrote: “The kids below are in a fight they never wanted to be in and yet you think you deserve donations more than they do?

“It’s no longer about religion, it’s about you and your greed.”