The horrific development was interrogated by former Pentagon official Michael Maloof on RT this morning. He explained that the radical terrorist group was capitalising on remote areas of countries to the east of their former territories – even reaching pockets of India. He warned: “Even though their physical caliphate in Syria and Iraq is gone, they’re in effect evolving into a new caliphate.

“This would include Iran, Afghanistan, Pakistan and even portions of India.

“It’s evolving in that way and they’re going to highly remote areas.

“Now, because they’re tech-savvy, they’re able to still do recruiting and what have you.

“But it’s going to make it even more difficult to get to because of the locations – high altitude, mountainous regions. 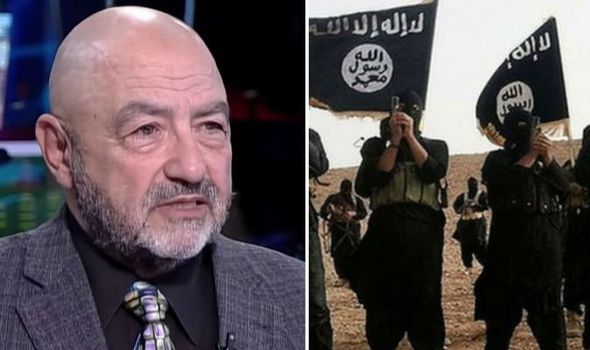 “They thrive in that area.

“You can’t bring on the forces that we did in Iraq into that area because its just impossible.”

The startling news follow the second public appearance of the organisation’s leader Abū Bakr al-Baghdadi on April 29 2019 – a full five years after he last showed his face to the camera when the caliphate was announced in 2014.

The news come as holidaymakers and reps have been forced to have terrorist training this summer amid rising concerns the terror outfit will strike and massacre Brits traveling abroad in Europe.

The Sun reports that fresh plans to kill tourists from the UK could be unleashed by members of the Syria-based group after ISIS was officially killed off. Fears are growing that after it was wiped out, returning soldiers who fought for the group could begin planning their own attacks on people from places including the UK.

The head of MI5 revealed that jihadis could “target hotel locations to kill, injure or take hostage” tourists.

The Daily Star on Sunday claimed that businesses including Thomas Cook, Jet2 and First Choice had given staff “survival skills” training to help prevent the worse happening.

Reports suggest that since 2017 employees of similar businesses had taken part in similar training to combat terror attacks.

The move comes after 250 people were killed in devastating attacks in Sri Lanka on Easter Sunday.

Charlie Winter, of the International Centre for the Study of Radicalisation at King’s College London, said similar attacks could occur.

He added: “Now that ISIS has been defeated in Syria and Iraq, it will become more violent outside this area.

“It’s a grim outlook, but we are likely to see more attempts at attacks, more regularly, for the foreseeable future.

“Sri Lanka was not a one-off.