A Victorian public servant in charge of infection control in hotel quarantine has been stood down after reports emerged they had reported to authorities twice since March for breaching protocols.

“Last night I become aware of reports in relation to Mr Bush and I formed the opinion overnight that Mr Bush needs to be stood down pending a review,” Mr Pearson said.

Mr Pearson was responding reports in The Australian newspaper, that also revealed a secret report had concluded the cause of the hotel quarantine leak in February was not in fact the use of a nebuliser by a guest who was suffering asthma, as the Victorian government claimed at the time. 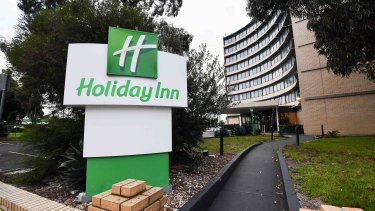 A returned traveller was publicly blamed for spreading coronavirus through the Holiday Inn quarantine hotel by using a nebuliser.Credit:Joe Armao

The COVID-19 Quarantine Victoria Infection Prevention and Control report, obtained by the paper, identified that it was the “extended time” taken by a contracted health worker to swab the woman which caused the virus in her room to be blown down the corridor by airconditioning before “pooling outside the door” of the room where the man with the nebuliser was staying with his family.

Opposition health spokeswoman Georgie Crozier called Wednesday’s revelations “disgraceful” and said she was in “disbelief” at the depth of dysfunction within quarantine hotels.

Ms Crozier said the senior bureaucrat who refused a COVID-19 test should be relieved of his duties immediately.

“I think it is just the height of arrogance and disregard,” she told reporters on Wednesday.

She slammed the government for falsely attributing January’s outbreak from the Holiday Inn hotel to a man who used a nebuliser.

“They have covered up the truth and blamed this poor man,” she said outside Parliament.

She called on COVID Quarantine Victoria to release the leaked reports in full.

He said acting Premier James Merlino should “go up to Sydney and copy [NSW Premier] Gladys Berejiklian’s homework because she can run a hotel quarantine program”.

There were no new coronavirus cases recorded in Victoria in the past day and more than 8,000 people were vaccinated.

According to government figures, there are currently more than 1700 people in hotel quarantine.

The returned traveller and who was originally blamed for spreading coronavirus through the use of a nebuliser at the Holiday Inn quarantine hotel has previously pushed for an independent review of his case because he did not trust the state government to investigate itself.

The government apologised the man for his treatment after he revealed to The Age and Sydney Morning Herald that he was twice given permission from Victorian health authorities to use the medical device while in quarantine.

Wednesday’s revelations about the likely swabbing source of the spread inside the hotel have only come to light because of the leaking of the internal report to media.

In February, the Holiday Inn outbreak plunged six million Victorians into a stage four lockdown for the third time.

Overseas flights were also barred from landing Melbourne for two months after the leak. The state’s hotel quarantine system only restarted again in early April.