India sees a record 40,425 coronavirus cases in one day, bringing total number of cases to 1.1million – the third highest in the world

India has piled up more than 40,000 coronavirus cases in a day for the first time as the world’s third-largest outbreak continues to worsen.

Another 681 fatalities take the total from 26,816 to 27,497, putting India on course to overtake Spain and France’s death tolls in the coming days.

With India’s national lockdown largely lifted, local governments have been scrambling to shut down high-risk areas while the country of 1.3billion people carries out more than 300,000 tests per day. 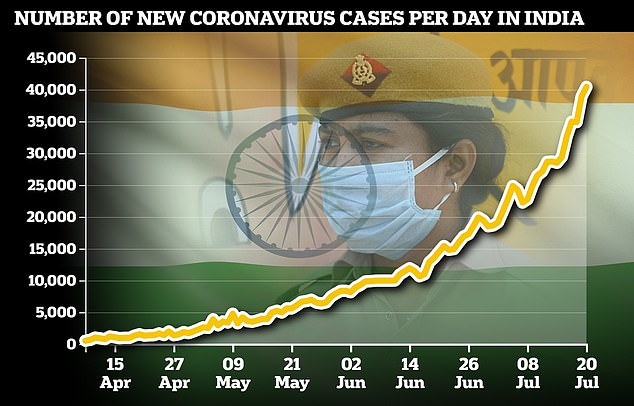 India today saw more than 40,000 new coronavirus cases for the first time. As this graph shows, the daily record has been repeatedly broken in recent weeks 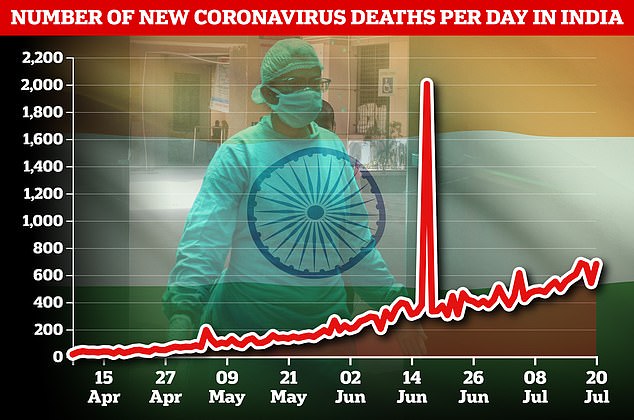 India announced another 681 coronavirus deaths today, taking its total to 27,497. The spike on June 17 included some older cases but officials did not specify how many

While more than 700,000 people in India are now regarded as having recovered from the disease, nearly 400,000 cases are still considered ‘active’.

The state of Maharashtra which includes Mumbai accounts for 310,000 of India’s total cases, while Chennai’s state of Tamil Nadu has seen more than 170,000.

Epidemiologists say India is still likely months away from hitting its peak of cases, suggesting the country’s already overburdened healthcare system will come under further strain.

However, the death rate is lower than in many European countries, which could be linked to India’s relatively young population.

‘In the coming months, we are bound to see more and more cases, and that is the natural progression of any pandemic,’ said Giridhar Babu, an epidemiologist at the Public Health Foundation of India.

‘As we move forward, the goal has to be lower mortality… A critical challenge states will face is how to rationally allocate hospital beds,’ he said.

The Indian Medical Association, a voluntary group of doctors which says 99 physicians have died so far, this week issued a ‘red alert’.

‘Doctors need to take charge of the situation and ensure the safety of themselves, their families, their colleagues and staff,’ it said in a statement. 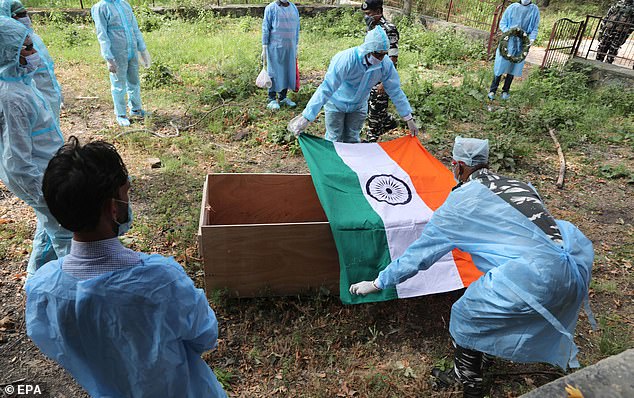 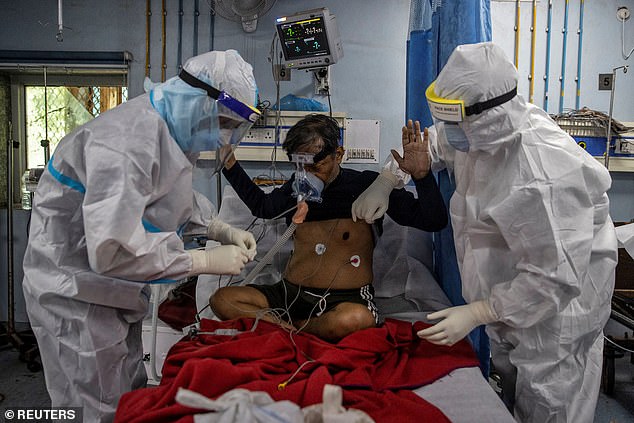 In the IT hub of Bangalore, the government ordered a week-long lockdown that began on Tuesday evening after the cases surged exponentially.

Bihar, an eastern state with a population of 128million and a fragile health system, announced a two-week lockdown on Thursday.

In Uttar Pradesh, the most populous state with more than 200million people, authorities have started placing residents under strict weekend curfews.

Other local governments are increasingly focusing on smaller lockdowns that shield the economy.

Nearly a dozen states have imposed restrictions on ‘containment zones’ – areas that can be as small as a few houses or a street.

Dr Anant Bhan, a global health researcher, said India is likely to have ‘a series of peaks’ as the infection spread in rural areas.

He pointed out that the capital New Delhi and the financial capital, Mumbai, had already had surges, while infections have now shifted to smaller cities.

India imposed a nationwide lockdown in March which it says helped to keep death rates low and bought time to beef up healthcare infrastructure.

But public health experts say shortages remain, and could hit hard in the coming months as cases continue to pile up. 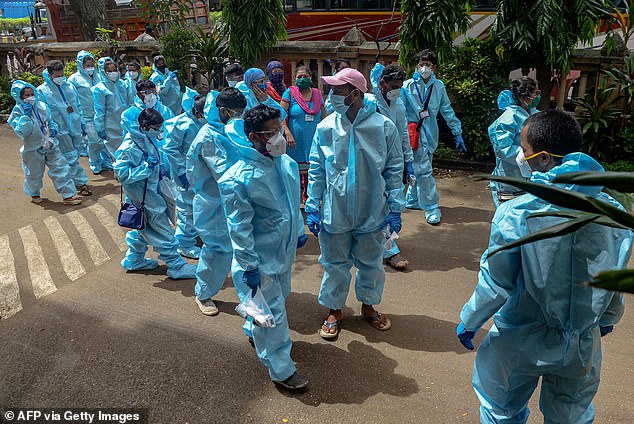 The lockdown came at an enormous economic cost amid an unprecedented humanitarian crisis when millions of impoverished migrant workers were forced to return to the countryside.

Several states including Bihar in the east, to which many of the migrants returned, have witnessed a surge in cases in recent weeks as the lockdown has been eased.

After months of sluggishness, India has now successfully ramped up testing, from a single lab in January to more than 1,200.

More than 300,000 samples are being tested every day, according to the Indian Council of Medical Research.

India reached a million cases on Friday, becoming the third country to do so after the United States in April and Brazil in June.

The daily record for new cases has been repeatedly broken, having only reached 30,000 for the first time last Thursday and first passed the 20,000 mark on July 3.

More than a quarter of a million of India’s total cases have come in the last eight days alone.

The death toll in India is the eighth-highest in the world, after the US, Brazil, Britain, Mexico, Italy, France and Spain.

However, India’s death toll is rising much more rapidly than that of European countries, meaning it may soon move further up the table.

Spain has seen 28,420 deaths to India’s 27,497, meaning India would be expected to overtake it in the next two days at its current average of 618 deaths per day.