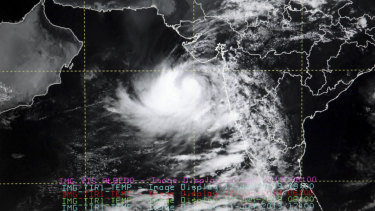 A computer screen shows a satellite image of Cyclone Vayu at a cyclone monitoring centre at the Indian Meteorological Department office in Delhi, India.Credit:AP

India's western state of Gujarat will be in the crosshairs of a dangerous storm, set to bring flooding rains, damaging winds and a storm surge of at least several feet as early as Thursday morning.

Vayu has sustained winds of 160 km/h, gusting to 200 km/h, making it the equivalent of a Category 2 hurricane.

The system is expected to intensify before a slow weakening trend takes over beginning on Thursday evening. Still, Vayu will likely remain at or above hurricane strength until the weekend.

Vayu's expected track will take it close to the Gujarat coastline, in western India on the shores of the Arabian Sea. 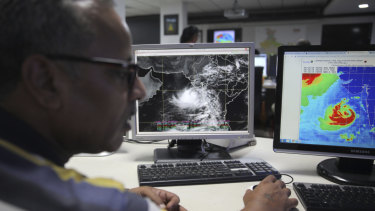 A staffer monitors Cyclone Vayu at a cyclone monitoring centre at the Indian Meteorological Department office in Delhi, India.Credit:AP

Gujarat borders Pakistan to the north, with a population of more than 60 million people. Coastal cities like Porbandar and Somnath are "very likely" to see winds of 150-160 km/h with gusts to 185 km/h, according to the India Meteorological Department.

The warning states that "total destruction of thatched houses" is in the offing, with the "potential threat of flying objects." The winds will abate farther inland.

It's not just the winds that will be destructive, however. A two metre storm surge is "likely to inundate the low coastal areas," which could put tens of thousands of residences in jeopardy, especially on the island of Diu.

The island is home to 45,000 people and is off the Kathiawar peninsula. A river separates it from the Gujarat mainland, with only two major routes off the island. Diu is only a few metres above sea level and could be ground zero for significant flooding.

Inland flooding from rain will also be an issue. A red rainfall warning – at the top of India's scale – has been issued for the Saurashtra peninsula and Kutch regions.

"Extremely heavy [rainfall] is possible at isolated places," warned the India Meteorological Department, cautioning that 20 centimetres or more is possible in some locations.

"Flooding of escape routes" is also a concern.

In advance of the potentially devastating storm, the Indian government reportedly has evacuated more than a quarter-million people.

The government is widely known for its proactive evacuations, credited with saving tens of thousands of lives in recent years. Following a Category 5-equivalent storm in 1999 that claimed more than 10,000 lives, the Indian government overhauled its cyclone plan of action. When a storm of similar strength struck the same region in early May, the death toll in India was merely 34.

Weather models conflict on Vayu's eventual path after its closest approach to land on Thursday – some keeping the system offshore over the weekend, while others hint it might enter southern Pakistan.