Hurricane Isaias has had a devastating impact on the Dominican Republic, causing at least two deaths.

The storm has also torn down trees, flooded streets and knocked out power for thousands of homes and businesses in Puerto Rico, according to media reports.

The storm has also brought heavy rain and wind to the Bahamas, with reports of buildings damaged and trees blown over.

The storm is currently a Category 1 hurricane on the Saffir-Simpson wind scale.

The storm’s impending arrival prompted authorities in parts of Florida to close COVID-19 testing sites and people to stock up on essentials.

Florida Governor Ron DeSantis also established a state of emergency for a dozen counties on the state’s Atlantic coast. 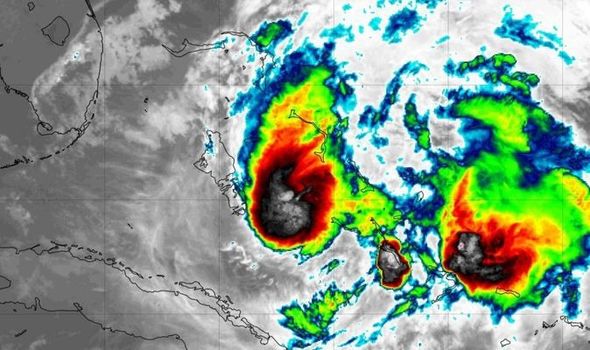 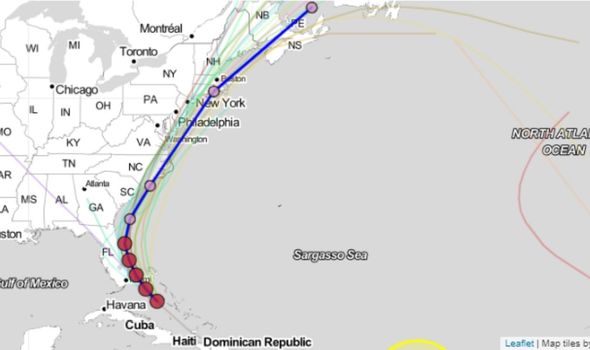 Where is Hurricane Isaias now?

The NHC last issued a public advisory on Hurricane Isaias at 5am EDT (10am BST), with the next due at 11am EDT.

The centre of Hurricane Isaias is approaching Andros Island, and is expected to approach the southeast coast of Florida later on Saturday and on Sunday. 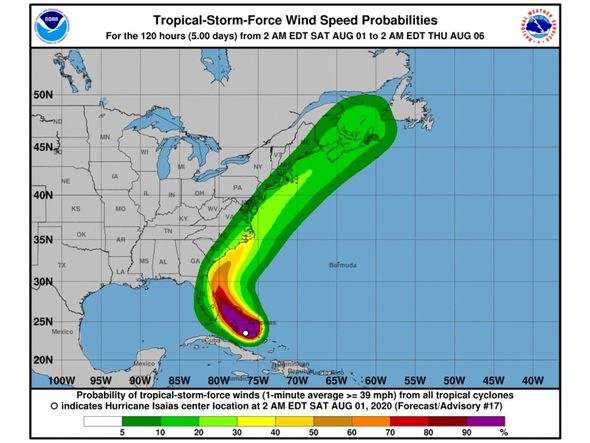 The system currently has maximum sustained winds of 85mph, and is moving in a northwest direction at speeds of 12mph.

During this time Isaias is forecast to maintain hurricane-strength winds, but little change in strength is expected on Sunday.

AccuWeather forecast Hurricane Isaias is “likely to have some impact on the northeastern United States next week following a potential landfall in the Carolinas on Monday”.

“The exact track of the tropical system will determine the scope of the rain, intensity of the wind and the magnitude of the storm surge in the region.”

Where are the watches and warnings in place?

In their key messages for the 5am EDT advisory, the NHC warn: “Hurricane conditions are expected along portions of the Florida east coast late Saturday and Saturday night, and a Hurricane Warning is in effect.

“Preparations to protect life and property should be rushed to completion. 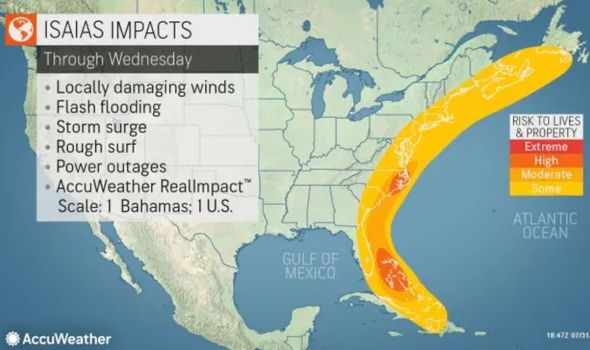 “Residents in these areas should follow advice given by local emergency officials.

“Isaias will produce heavy rains and potentially life-threatening flash and urban flooding, especially in low-lying and poorly drained areas, across South to east-Central Florida, and across the Carolinas to the mid Atlantic.

“Minor river flooding is possible across portions of the Carolinas and into Virginia early next week.”

The NHC has issued a Hurricane Warning for Boca Raton to the Volusia/Flagler County Line Florida, Northwestern Bahamas and Central Bahamas.

A Hurricane Watch is in effect for Hallandale Beach to south of Boca Raton Florida.

A Storm Surge Watch is in place for Jupiter Inlet to Ponte Vedra Beach Florida.

Tropical Storm Warnings are in effect for North of Ocean Reef to south of Boca Raton Florida and Lake Okeechobee.