‘Up the marbles!’: How Barnes Wallis’s daughter congratulated Dambusters inventor after bouncing bomb he dreamed up while playing with children’s toy at family home smashed the heart of Hitler’s war machine in 1943

The inventor of the bouncing bomb which destroyed German dams in a famous raid in 1943 was congratulated by his daughter who remembered her father messing about with marbles in the family’s back yard as he came up with the design.

Engineer Barnes Wallis, the man behind the bouncing bomb, played with marbles in his family garden as he perfected the weapon – as daughter Mary, 16, recalled in an excited letter back home after the famous Dambusters raid.

The letter, written just three days after the bombing mission destroyed Hitler’s dams in the Ruhr valley, is now up for auction. 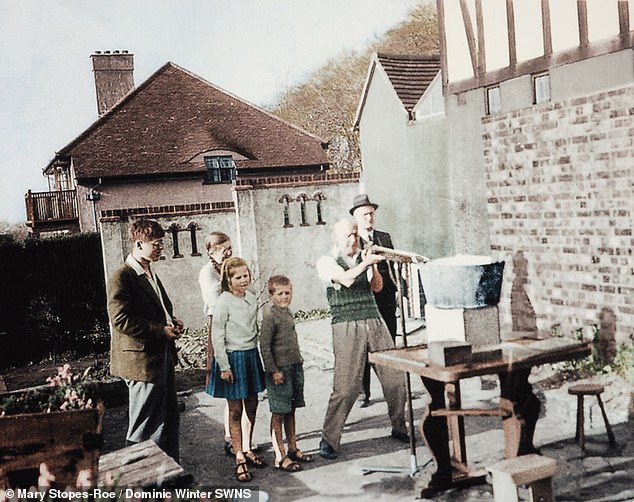 Pictured: Barnes Wallis and his family practise shooting marbles into a bath tub at their home in Effingham as Wallis perfects the design for the weapon used in the Dam Busters mission 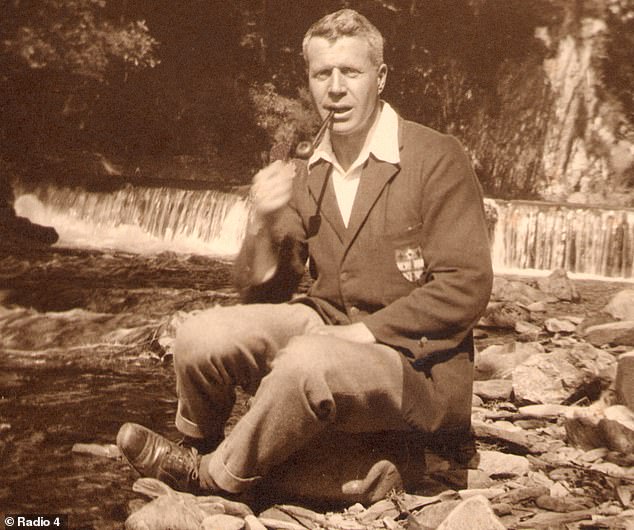 Barnes Wallis, pictured in 1924, was a scientist and inventor who designed the bouncing bomb 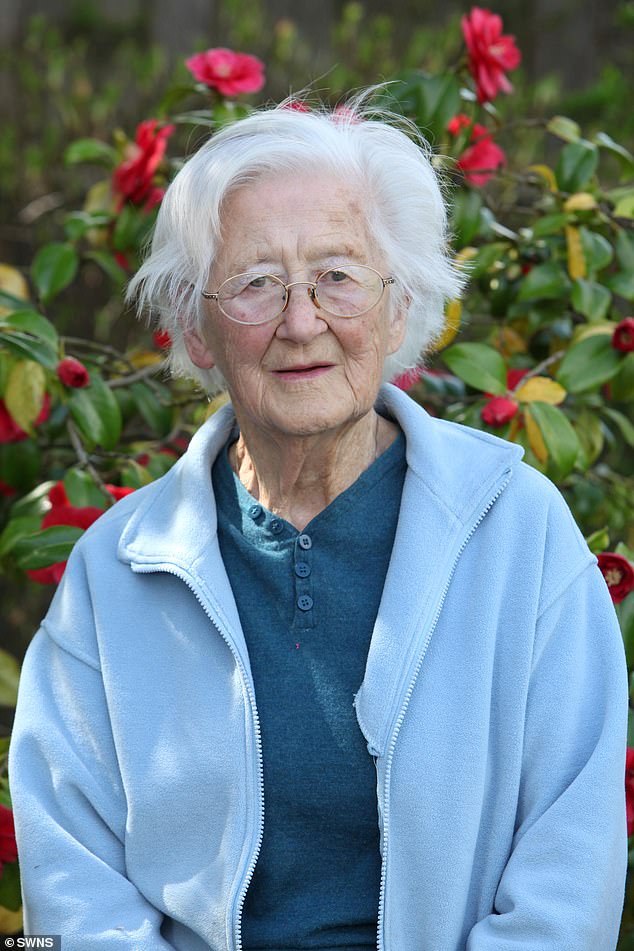 Mary Wallis, later Mary Stopes-Roe, wrote the letter when she was a 16-year-old schoolgirl nicknamed ‘Wiggy’

Dubbed Operation Chastise, the mission saw an attack on German dams carried out on 16–17 May 1943 by 617 Squadron, known ever since as ‘the Dambusters’.

The excited note from ‘Wiggy’ to her daddy engineer Barnes Wallis has shed more light on how he came up with the ‘Bouncing Bomb’.

He first proposed the famous weapon in a paper published in 1942 before it was deployed a year later.

Wiggy – Mary Wallis, then 16 – penned the congratulatory note to her father just three days after the second night of bombing in 1943.

It lists a number of experiments the family carried out – including the ‘impossible task of trying to see whether a minute marble bounced under or over a wobbley piece of string’.

The message also reveals that Mary celebrated hearing that her father’s extensive efforts ‘were not in vain’ – but couldn’t reveal why to unsuspecting staff at her school. 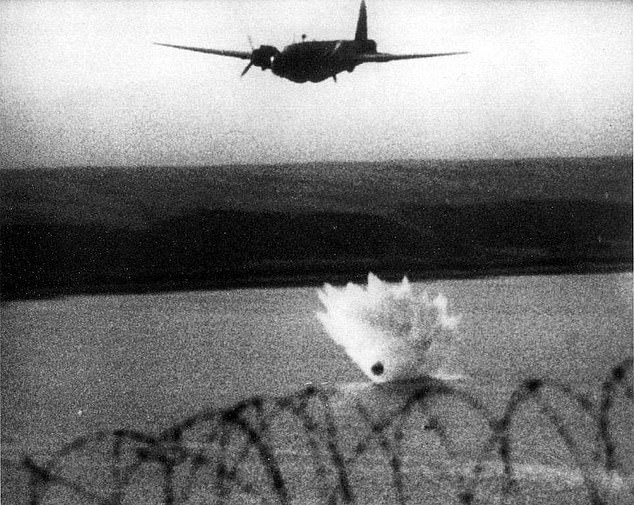 Pictured: A bouncing bomb slung in position beneath a Lancaster Bomber flown during the Dambusters raid in 1943. The Lancaster Bomber was ideal for an attack on the dams because of its huge bomb bay, great loading capacity and because it was highly manoeuvrable 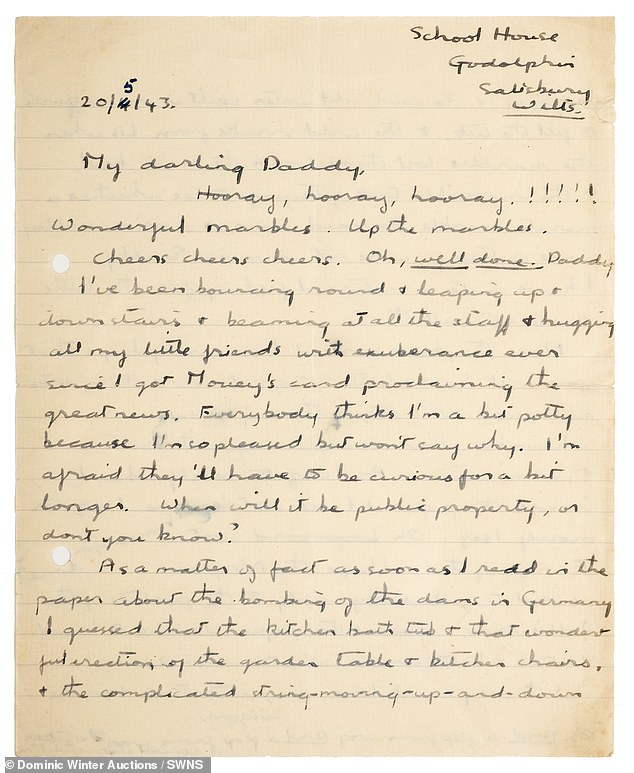 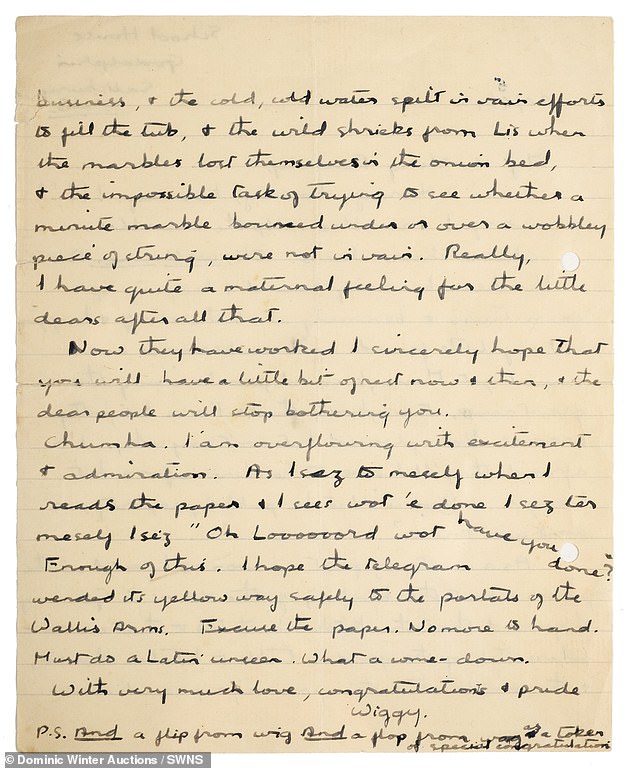 She signed off the letter ‘With very much love, congratulations and pride’ three days after the famous mission

The idea behind the bouncing bomb was a weapon that could skip over the surface of water and avoid torpedo nets before sinking next to its target.

The explosion would then act like a depth charge – concentrating the force of the surrounding water.

The note, written neatly in blue ink, is being sold along with a modern photo print of Wallis with his children taken while they were doing the garden trials.

Barnes, hailed as a war hero for his efforts towards the bouncing bomb, died in 1979. Mary passed away in 2019.

The letter says: ‘As a matter of fact as soon as I read in the paper about the bombing of the dams in Germany I guessed that the kitchen bath tub and that wonderful erection of the garden table and kitchen chairs, and the complicated string-moving-up-and-down business, and the cold, cold water spilt in vain efforts to fill the tub, and the wild shrieks from Lis when the marbles lost themselves in the onion bed, and the impossible task of trying to see whether a minute marble bounced under or over a wobbley piece of string, were not in vain.’

The Dambusters: How bouncing bombs – and incredible flying by RAF pilots – flooded the Ruhr valley and delivered a crucial blow to the Nazi war machine

On May 16, 1943, 19 Lancaster bomber crews gathered at a remote RAF station in Lincolnshire for a mission of extraordinary daring – a night-time raid on three heavily defended dams deep in Germany’s industrial heartland.

The dams were heavily fortified and needed the innovative bomb – which bounced on the water over torpedo nets and sank before detonating.

To succeed, the raiders would have to fly across occupied Europe under heavy fire and then drop their bombs with awesome precision from a mere 60ft above the water.

The Mohne and Eder Dams in the industrial heart of Germany were attacked and breached by mines dropped from specially modified Lancasters of No. 617 Squadron. 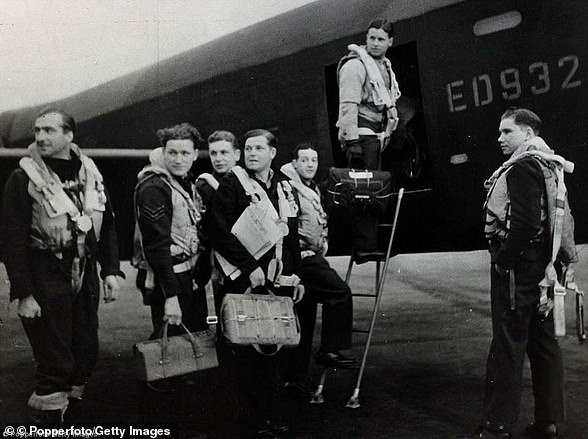 The Sorpe dam was was also attacked by by two aircraft and damaged.

A fourth dam, the Ennepe was reported as being attacked by a single aircraft (O-Orange), but with no damage.

Up to 1,600 people were estimated to have been killed by floodwaters and eight of the 19 aircraft dispatched failed to return with the loss of 53 aircrew and 3 taken prisoner of war.

Wg Cdr Guy Gibson, Officer Commanding No. 617 Sqn, was awarded the VC for his part in leading the attack.

The raid, orchestrated by Guy Gibson and the RAF’s 617 ‘Dambuster’ Squadron, was seen as a major victory for the British, and Wing Commander Gibson is recognised as one of the war’s most revered heroes.

Their success was immortalised in the classic 1955 film The Dambusters, its thrilling theme tune and gung-ho script evoking the best of British derring-do.