The hazy-eyed sheep shearer was shifting in his seat in a clinic in Western Australia, unsure if he could do what the doctor said would save his life. A heroin user for 20 years, he was now in the depths of detoxification treatment.

In a soft voice, the doctor, George O'Neil, pleaded with the man to continue to the next stage: an implant of the drug naltrexone, a device the physician had invented and that is an emerging facet of an impassioned debate over the best way to treat addiction. 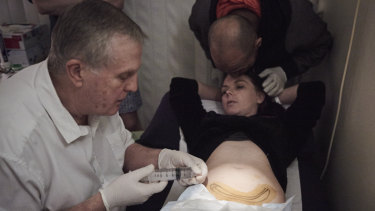 "I don't win with everybody," the doctor said after the man had left. "But I try."

Over almost two decades, O'Neil, 70, has implanted his device — which is unlicensed but legal in Australia — into thousands of people who have travelled to his non-profit clinic in Subiaco, a suburb of Perth.

The implant delivers naltrexone, which blocks the effect of opioids, into patients' stomachs for months, eliminating the need for addicts to remember to take a pill or receive an injection.

Now American researchers are exploring whether the implant could be an effective new tool in the United States against a scourge of opioid addiction that has killed thousands of people across the country.

Dr Adam Bisaga, a professor of psychiatry at Columbia University Medical Centre who is leading the trial, said it was crucial to combat the ambivalence of many opioid users toward taking medication to ease their addiction.

"If we have a way of targeting the ambivalence — and the way you do that is long-acting preparation — that will be a major advance," he said. "In the US, it's pretty clear that it's an acceptable and viable treatment." 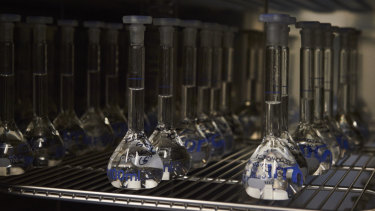 Test tubes set up to measure the release rate of the drug naltrexone, which blocks opioid cravings, at Go Medical Industries in Subiaco.Credit:New York Times

O'Neil — Papa George to some of his patients — is a soft-spoken former obstetrician who says he is guided by his Christian faith. Sheets with Bible verses line the walls of his clinic, and photos of his patients' children are displayed in his modest home alongside pictures of his own children.

He said he dreamed that an invention that sprang from his clinic and his medical device company, which feels more boutique than corporate, would expunge the world of addiction forever.

"I'm good at dreaming," he said, "but there's people around me good at doing."

But less lofty issues are also at play. O'Neil is competing with an American company, BioCorRx — which once operated under a similar name as his clinic, Fresh Start — to introduce a naltrexone implant in the United States. In the process, O'Neil has courted publicity for his invention, which he says is superior and lasts longer.

BioCorRx generated controversy last month when prison officials in Louisiana said they would offer the company's unapproved naltrexone implant to prisoners who volunteered to take it. The move alarmed human rights advocates, who questioned whether the prisoners were essentially being used as guinea pigs.

And naltrexone itself is on one side of a medical and political divide. The drug is popular with officials like prison wardens because, unlike the two more common medications used to combat addiction, it is not an opioid itself.

Those other drugs, methadone and buprenorphine, have drawn criticism — mostly among politicians, but also among some physicians like O'Neil — as merely swapping one drug for another. But while they are opioids, they are weaker ones and do not produce a high when taken correctly.

Many in the addiction treatment field have been fighting the stigma. Methadone and buprenorphine are cost-efficient, and their effectiveness is backed by ample scientific data. 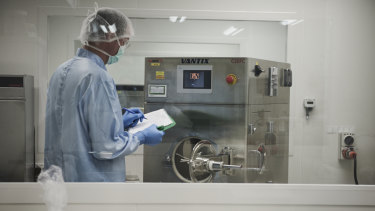 As important, the two drugs, unlike naltrexone, do not require patients to go through a detoxification process of several days during which they cannot use any opioids. That detox period ensures that patients will go through withdrawal, which can lead many to abandon the treatment.

But beyond the debate over the two approaches, the overriding concern among most in the medical community is ensuring that medication of some sort is available to people struggling with addiction.

In the United States, naltrexone can be taken daily as a pill or as an injection that lasts up to a month, though the injection has not been approved in Australia.

O'Neil's implant can last six times as long, or twice as long as a BioCorRx implant that has been approved by regulatory bodies in Russia. He stressed the fact that his company, Go Medical Industries, does not have shareholders, in part because its founders want to maintain its original vision. 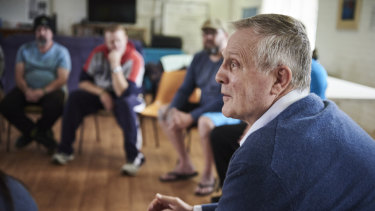 The treatment costs about $7000 for local patients, said Jeff Claughton, the clinic's chief executive. Patients pay what they can, and the clinic also receives government funding and donations.

While his implant blocks physical cravings, O'Neil believes that beating addiction is up to "heart and soul" changes. It is a window for those with broken family relationships and mental health problems to lay their pasts to rest, he said.

"People turn up here and they say I want to change my whole lifestyle," he said. "And I haven't had to preach to them one bit."

That includes Peta Walker, 42. She had tried methadone and rehabilitation centres in an effort to kick a years long addiction to heroin and amphetamines, she said. The implant was her last hope.

"I had a plan to actually kill myself if it didn't actually work," she said.

Now, after receiving additional implants, she has been sober for six years, she said. She has a full-time job and has reunited with her children, from whom she was separated during stints in prison.

"I'm doing things that I always dreamed of," she said.

While the device has not been licensed in Australia — O'Neil said the cost was prohibitive — he provides it through a program that gives those at risk of premature death access to unlicensed medications.

One expert, Louisa Degenhardt, a professor at the National Drug and Alcohol Research Centre at the University of New South Wales, Sydney, said she was concerned that the naltrexone treatments severely lower drug users' opioid tolerance.

"If they return to use, they will be at risk of overdose," she said.

Researchers are still investigating how long-acting naltrexone holds up against traditional treatments, though there is evidence that it has advantages over the daily tablet. One study found that both naltrexone injections and buprenorphine were equally safe and effective, though many of the participants assigned to naltrexone never started it because they could not tolerate withdrawing from opioids first.

Studies of O'Neil's implant — some funded by his clinic — have found that patients who used his device had a lower rate of opioid overdose compared with those who took the oral tablet, and that the implant may have some benefits over methadone.

In a darkened clinic room last month, Jessica Martin, 25, closed her eyes as O'Neil made an incision and screwed a finger-size tube of naltrexone tablets into her numbed stomach. Over his shoulder, a plastic surgeon visiting from Columbia University watched. Martin's boyfriend kissed her forehead — soon it would be his turn.

A ward of the state who had lived on the streets, Martin said she had become addicted to heroin four years ago after using it to manage pain in her wisdom teeth. Among other things, she said she wanted to get her driver's licence.

"I feel better now coming here," she said. "I feel confident that I'll stop it."