Show dubbed The Virus, aired on social media and on a private channel, focuses on life during the pandemic. 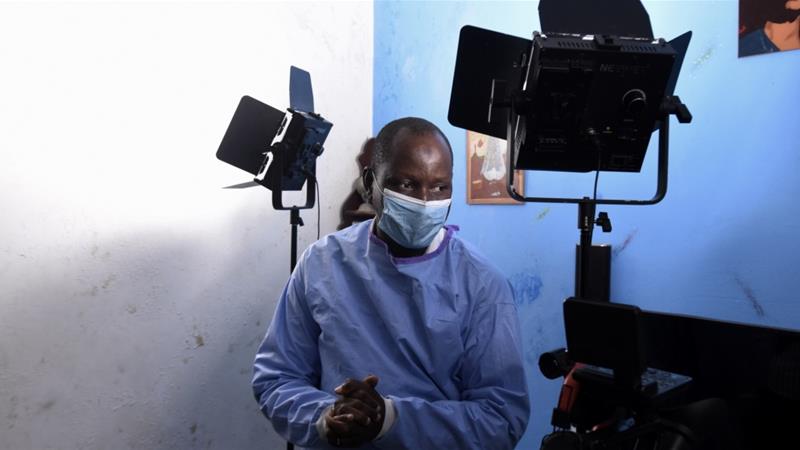 Since late April, a short television show in the Wolof language, dubbed The Virus, has aired on social media and on a private channel, focusing on day-to-day life during the pandemic.

“We wanted to make five to eight-minute TV films to show what to do and what not to do to avoid the coronavirus,” said the programme’s director, Mohamed Moustapha Kante.

Wearing a face mask on his cluttered set in the capital city, Dakar, Kante explained that the idea behind the series was to go beyond stilted government slogans such “wash your hands” or “cough into your elbow”.

The 30-episode series is being broadcast on ITV, one of the country’s most popular channels.

It started airing at the beginning of Ramadan and broadcasts in the evening, when the Muslim faithful break their fast, and when many Senegalese like to sit in front of the box.

In The Virus, the fictional Doctor Diouf appears at the end of episodes constructed around daily life in average Senegalese homes, to proffer his advice.

In one episode, for example, a young man criticises his sister who is too engrossed by social media to listen to health warnings about COVID-19.

She learns her lesson when she eventually catches the virus, however.

“We’re getting feedback from viewers,” says Thiam. “For example, someone told us he didn’t know that diarrhoea was one of the symptoms.”

Senegalese authorities have recorded some 1,200 coronavirus cases to date, with 33 fatalities, a low number compared with Europe and the United States.

But infections are increasing, and as with other poor countries in the region, there are fears that Senegal is ill-prepared to handle a large outbreak.

The government has shut the borders, restricted travel between cities and imposed a strict dusk-to-dawn curfew to curb the virus.

But authorities are also broadly receptive to coronavirus-related entertainment.

For example, the health ministry is currently advising several production companies that are developing virus-related content, according to its spokeswoman Ngone Ngom.

“We have received a lot of productions and storylines on the coronavirus,” she said. “We are currently looking at how to work with these production companies to raise awareness.”

Senegal’s broadcasting authority has also warned against irresponsible programming, however, and has issued guidance that “television and radio stations avoid anything resembling the stigmatisation of victims”.