From $70 per passenger, Sea World Helicopters takes visitors on a five or 10-minute flight over the Gold Coast. From high above the theme park passengers take in sweeping views of the ocean, Surfers Paradise and the hinterland.

It’s a popular, “once in a lifetime” trip, and at lunchtime on Monday there was a queue to the seaside helipad. It included a western Sydney mother, Vanessa Tadros, with her 10-year-old son Nicholas; Winnie de Silva, 33, and her son Leon, nine, from Geelong; as well as a British couple, who were recently married. 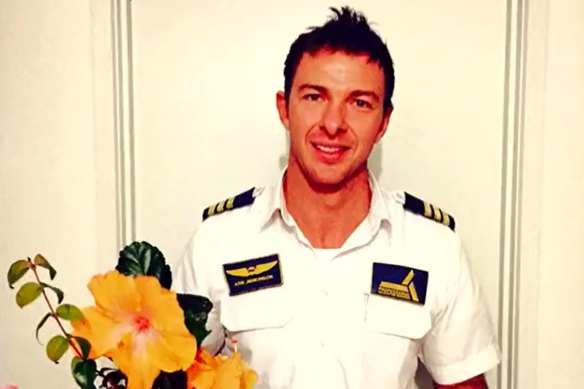 Sea World pilot Ashley Jenkinson is being remembered as a legend and a true gentleman.Credit:Nine

The six were ushered as a group onto an air-conditioned Airbus helicopter, which was helmed by the company’s chief pilot, Ashley Jenkinson, 40, an aviation veteran who helped victims of the Northern Rivers flood emergency early last year.

The blades spun and the helicopter rose. But at the same time, another Sea World helicopter with five passengers aboard was preparing to land. Tourists watched, horrified, as they came frighteningly close.

Twenty seconds after it lifted into the air, Jenkinson’s aircraft collided with the second helicopter. It lost its main rotor and gearbox, flipped and crashed heavily into a sandbar.

Jenkinson, the Sydney mother and the British couple died. Nicholas was rushed to the Queensland Children’s Hospital, where he is in a critical condition. De Silva and her son survived with serious injuries.

The pilot of the second aircraft managed to land safely on the sandbank. Five of the six aboard – a pilot, a West Australian woman and two New Zealand couples – suffered shrapnel wounds from a shattered windscreen. 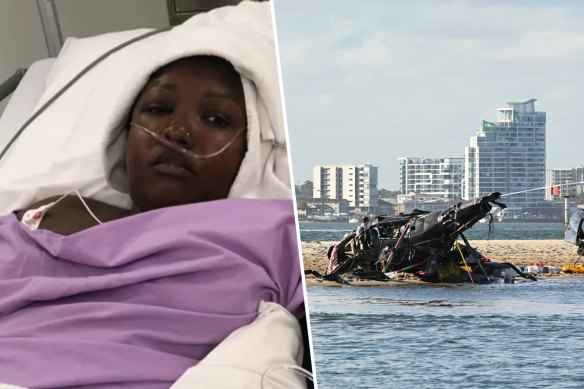 Winnie de Silva, from Geelong West, and her son survived the chopper collision on the Gold Coast on Monday. Both remain in a critical condition in separate Queensland hospitals.

He was praised for his skilful landing. John Hunt, who witnessed the crash, said he feared one of the helicopters was going to land on top of the crowd and said the pilot saved many lives because the theme park was “choked with people.

“The other helicopter hovered over the jellyfish building [in the park],” he told the ABC. “We thought he was going to crash on top of all the crowd, but the pilot was able to get out onto the sandbank, probably an extra 30 metres away from where it was.”

On Tuesday friends paid tribute to British-born Jenkinson, who had a toddler son, Kaiden, with his partner Kosha. “I know that fun, positive, adventurous spirit of the legend that you are, will live on through the lives of everyone that knew you,” said friend Lee Campbell.

“An amazing pilot,” a friend Lucy Rachel said on Facebook. “Always so kind, helpful, and supportive. A true gentleman, and always willing to lend a hand.”

News Corp named the British couple who married in August 2021 as Ron Hughes, 65, and Diane Hughes, 57, from Liverpool, and the Sydney mother Vanessa’s surname as Tadros, née Geagea.

A woman who identified herself as a cousin of the Sydney victim posted a message on Facebook. “Rest in peace Vanessa,” she said. “Prayers for little Nicholas to survive the intensive care.” 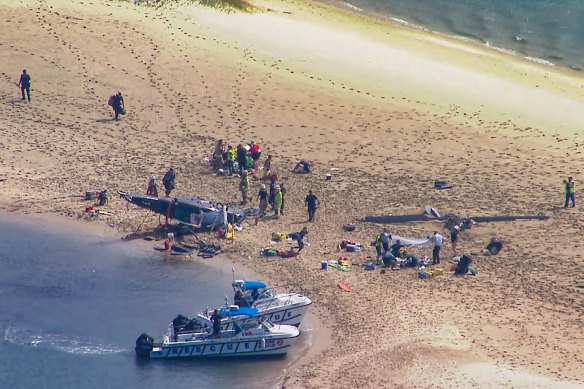 The wreckage of two helicopters near Sea WorldCredit:Nine News

De Silva and her son were on a brief holiday from Geelong. Her husband, Neil, set up a Go Fund Me Page to help cover the family’s costs. “Thankfully, they are both alive but have a lot of surgery ahead of them, which means the family will need to stay here on the Gold Coast and I won’t be able to return to work,” he wrote.

Air safety investigators are looking into the causes of the crash. There were recording devices on board. It expects to finish a preliminary report within eight weeks.

Air safety expert Geoff Dell, an associate professor at Central Queensland University, said small adventure operations such as Sea World Helicopters did not have their own air control and relied on the pilots to communicate with each other.

“One of the two helicopters should always have the other one in sight,” he said. “It seems likely that the pilots did not see each other or co-ordinate with each other.”

Sea World Helicopters – a separate company from the theme park – issued a statement saying it was devastated by the crash and was co-operating with investigators. “Our hearts go out to all those involved over this very sad time,” it said.