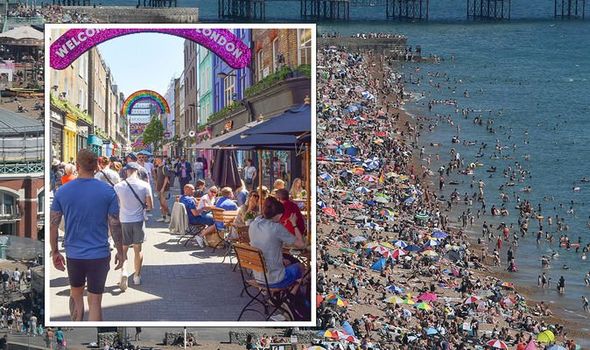 Blazing sunshine boosted by a Spanish plume will push the mercury towards 30C on Tuesday, forecasters say.

Sun-starved Brits will have to be quick to soak up the rays, however, as it is back to grey skies and gloom mid-week.

Jim Dale, meteorologist for British Weather Services, said: “Temperatures will lift into the mid- to high 20Cs through the start of the week, and there is every chance we could see 30C in some parts on Tuesday.

“Britain will become squeezed between two weather systems pulling warm air in from the Continent in a Spanish plume.

“The weather will take a turn mid-week when we expect a return to more changeable and cooler conditions.”

Temperatures of 30C will be almost double the average for the time of year and among the highest on record for September.

The overall record for the month is 35.6C set at Bawtry, Hesley Hall (South Yorkshire) in 1906.

While the weather will take a dip after Tuesday, long-range forecasts reveal more heat on the way.

Mr Dale said: “There is every chance that in parts of the country this month could turn out hotter than August.

“This warm spell is not going to be very short-lived but there are signs of further hotter weather this month.”

Hot weather may be driven in part by the fallout of deadly Hurricane Ida which has ravaged swathes of eastern America.

Remnants from the megastorm will supercharge the jet stream hurling tropical air towards the UK.

Met Office Expert operational meteorologist David Oliver said: “It is common for the hurricane season in North America to play a factor in the weather patterns affecting the UK, and in most cases that’s down to its role in shifting the upper air that drives our weather systems.

“As Ida breaks up, the low-pressure system and warm tropical air associated with it will help to accelerate and shift the jet stream over the Atlantic.

“The behaviour of the jet stream is complex but overall, it will tend to lie to the north of the UK, this helping to hold high pressure close by.

“So, whilst rain is likely to spread to some northern parts of the UK on Sunday and into Monday, for many places conditions will remain dry and increasingly warm this weekend and into the first half of next week.”

James Madden, forecaster for Exacta Weather, said: “We are about to see a change in the weather with a cluster of warm days this week.

“Temperatures could nudge 30C in parts of the country on Tuesday as warm air comes in from Spain.

“The hot weather is expected to last only until mid-week, however there are signs of further surges of heat during the month.”