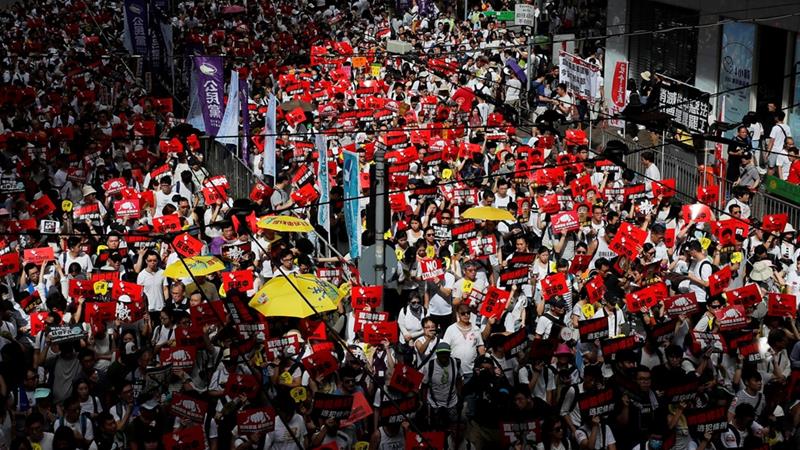 Tens of thousands of people are gathering in Hong Kong in the last bid to block a proposed extradition law that would allow suspects to be sent to China to face trial, with police bracing for the biggest march in the city in 15 years.

Police chiefs called for public restraint, government-funded broadcaster RTHK reported on Sunday, as they mobilised more than 2,000 officers for the march that organisers expect to draw more than 500,000 people.

That would make it the biggest rally since a similar number turned out in 2003 to challenge government plans for tighter national security laws, which were later shelved.

Early indications suggested the crowds could reach several hundred thousand, with underground rail stations jammed with people trying to join the rally, which will start at 3pm (07:00 GMT) at Victoria Park.

Protesters who arrived early chanted “no China extradition, no evil law” while others called for Hong Kong’s Chief Executive Carrie Lam to step down. One protester held a sign reading “Carry off Carrie”.

Lam has tweaked the proposals but has refused to withdraw the bill, saying it is vital to plug a long-standing “loophole”.

However, people remain suspicious and question the fairness and transparency of the Chinese court system.

“Nobody trusts the mainland government, how can people feel they would get a fair trial in the mainland,” Claudia Mo, a legislative councillor in Hong Kong, told Al Jazeera.

“There is no due process there, and it means that people can just be whisked away across the border to face a biased court system.”