The officer fired three shots on Monday morning toward two black-clad protesters in a neighbourhood where traffic had been snarled by roadblocks, video footage from the scene shows. One of the protesters crumpled to the ground after being shot at point-blank range, and appeared conscious afterward. It is unclear what took place in the minutes before the footage of the confrontation emerged.

The footage was broadcast live on Facebook from the Sai Wan Ho neighbourhood by Cupid Producer, which describes itself as a production house based in Hong Kong.

The shooting on Monday comes as pro-democracy activists in Hong Kong blocked roads and scuffled with riot police officers across the city as part of what had been billed as a citywide general strike.

It has been alleged that Hong Kong police fired three live rounds at two protesters in Sai Wan Ho during city-wide strike action.

Protesters were blocking roads at an intersection outside Tai On Building in Sai Wan Ho. 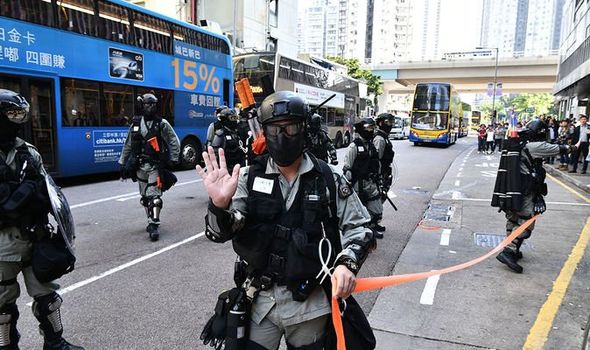 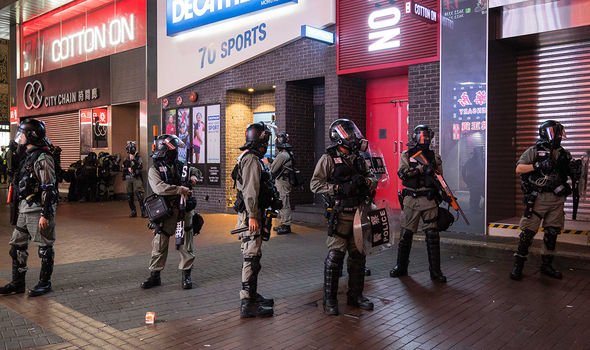 At around 7.15am local time (11.15pm GMT), a police officer tried to give chase before he pulled out a service pistol and pointed it at them, according to footage captured by Cupid Producer.

Another protester in black then appeared to try and grab the officer’s gun, as he fired two more shots.

Bloodstains were seen on the ground as the two were subdued.

One protester appeared to be conscious, as he responded when he was asked his name.

However, the other protester appeared to be unresponsive.

A woman tried to get close to the unconscious protester, but was wrestled down by a riot police officer.

The two protesters were taken away in an ambulance.

The protests intensified throughout the city over the weekend in response to the death of a student who was injured last week after a recent clash between police and protesters.

Protesters across Hong Kong tried to disrupt the morning commute on Monday as part of a wider plan to mobilise a general strike.

Arrests were made in the Tuen Mun, Wong Tai Sin and Sha Tin areas of the city.