Big Lizzie’s in charge: HMS Queen Elizabeth assumes responsibility as flagship of the fleet as the £3bn carrier prepares for its first operational deployment

The Royal Navy aircraft carrier HMS Queen Elizabeth has taken over responsibility as the flagship of the fleet.

Fleet Commander Vice-Admiral Jerry Kyd, who was the first seagoing commanding officer of the £3 billion warship, was received onboard at Portsmouth Naval Base to mark the transfer of the role from assault ship HMS Albion which has held the title for nearly two years.

The transfer was announced to the Royal Navy’s ships and shore establishments by a signal at 1.30pm. 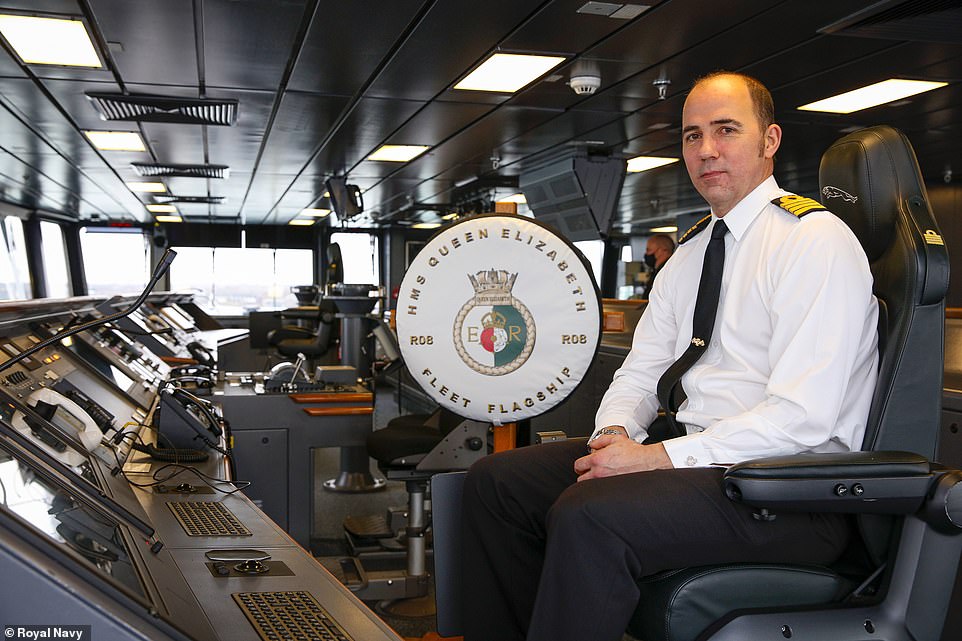 Captain Angus Essenhigh, pictured on the bridge of HMS Queen Elizabeth which assumed status as flagship of the fleet at 1.30pm today ahead of her first operational deployment later this year 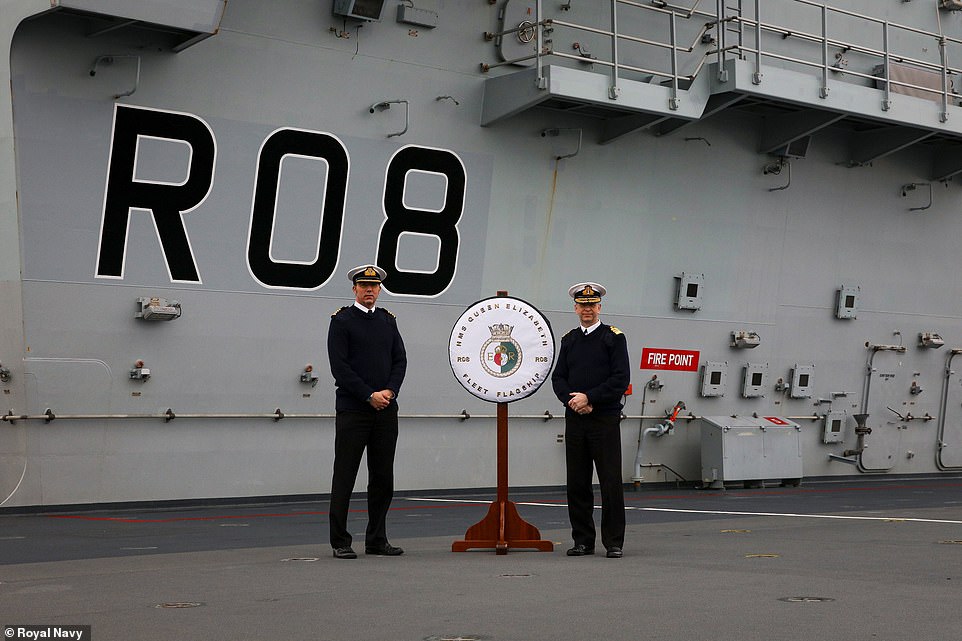 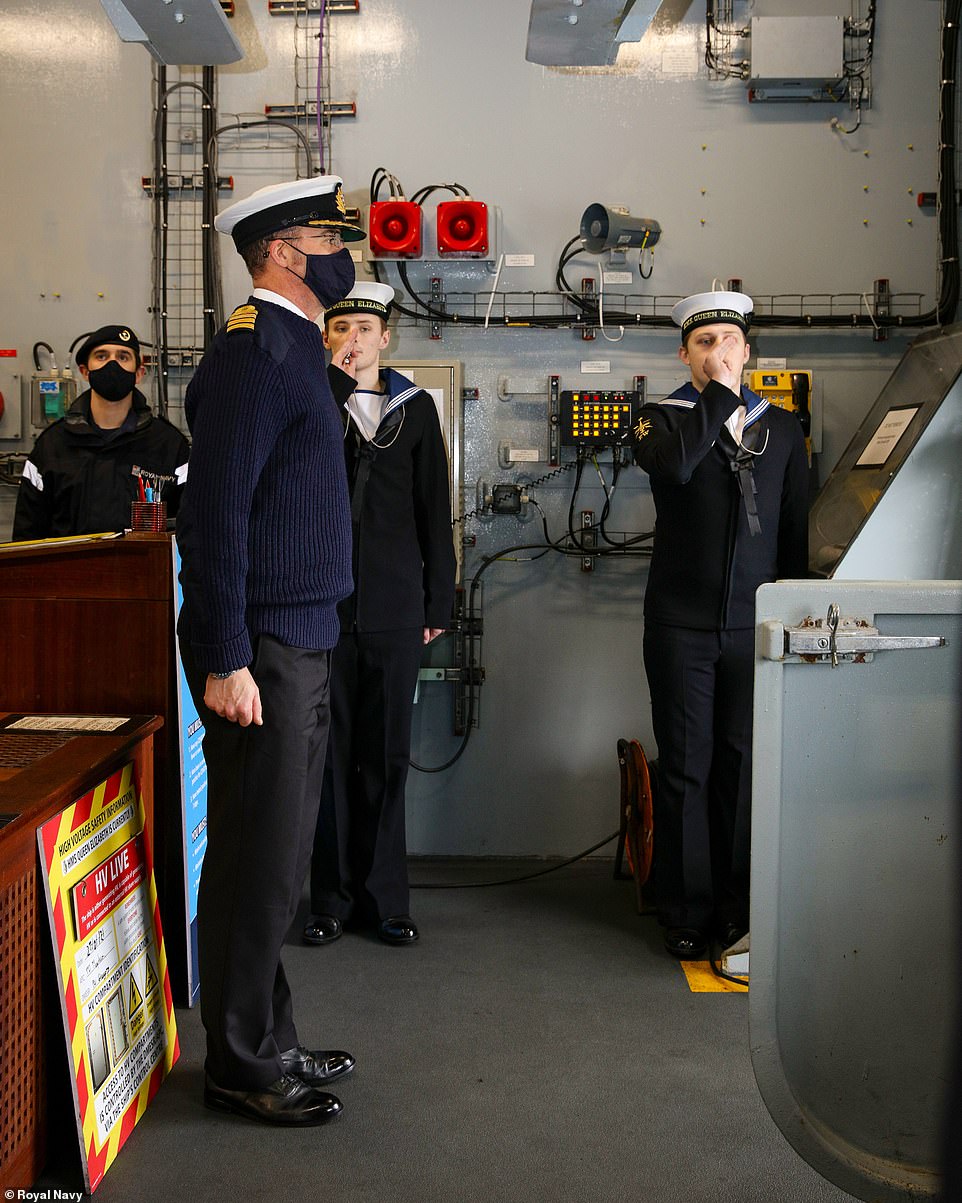 Captain Essenhigh, pictured left, stood at the top of the gangway awaiting the arrival of the Fleet Commander ahead of today’s ceremony in Portsmouth Naval Base 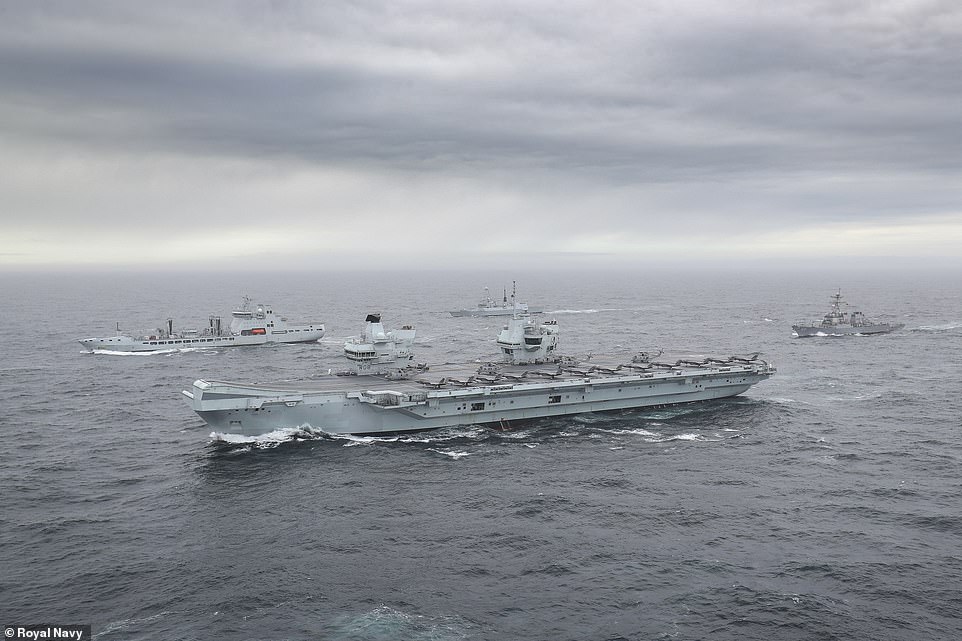 The new flagship took part in a training exercise in October 2020 when the UK Carrier Strike Group assembled for the first time. This year the strike group will go on its first patrol to east Asia

First Sea Lord Admiral Tony Radakin said: ‘The position of fleet flagship is a symbol of HMS Queen Elizabeth’s importance to the nation, not just in restoring our carrier strike capability, but as a rolling statement of British commitment to global security, prosperity and trade.

‘It’s right that we bestow such a historic title now. In the coming months HMS Queen Elizabeth will lead the most ambitious Royal Navy deployment in decades. She will be a focal point as we look forward to an extraordinary year.’

It was announced last week that the Queen Elizabeth and its F-35B Lightning jets will be complemented by a detachment of the stealth fighters from the US Marine Corps as well as a US Navy destroyer during its first operational strike group deployment.

HMS Queen Elizabeth and its strike group will first take part in a war-fighting exercise with other Nato navies during Exercise Strike Warrior off Scotland during the spring before it departs for the Mediterranean. 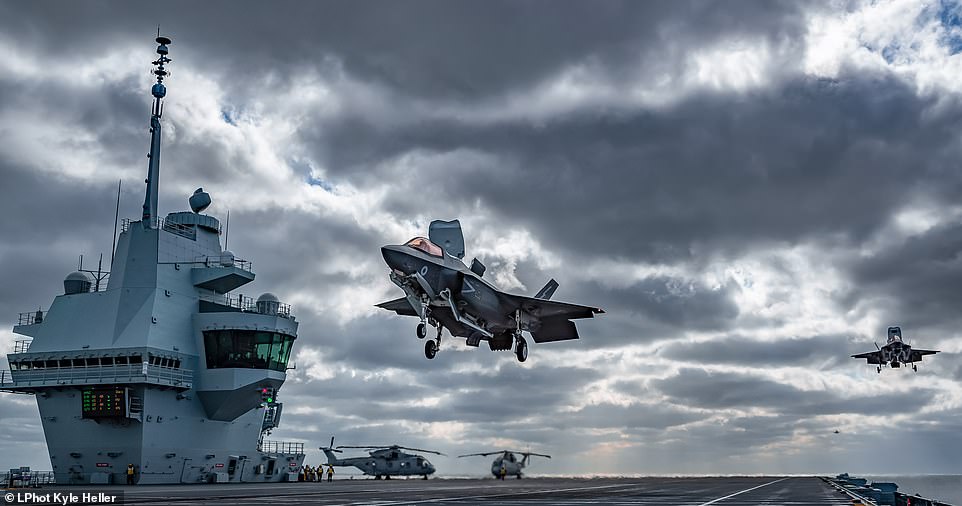 The aircraft carrier has undergone intense testing, including getting the flight deck fully operational with its F-35B Lightening II fighter jets 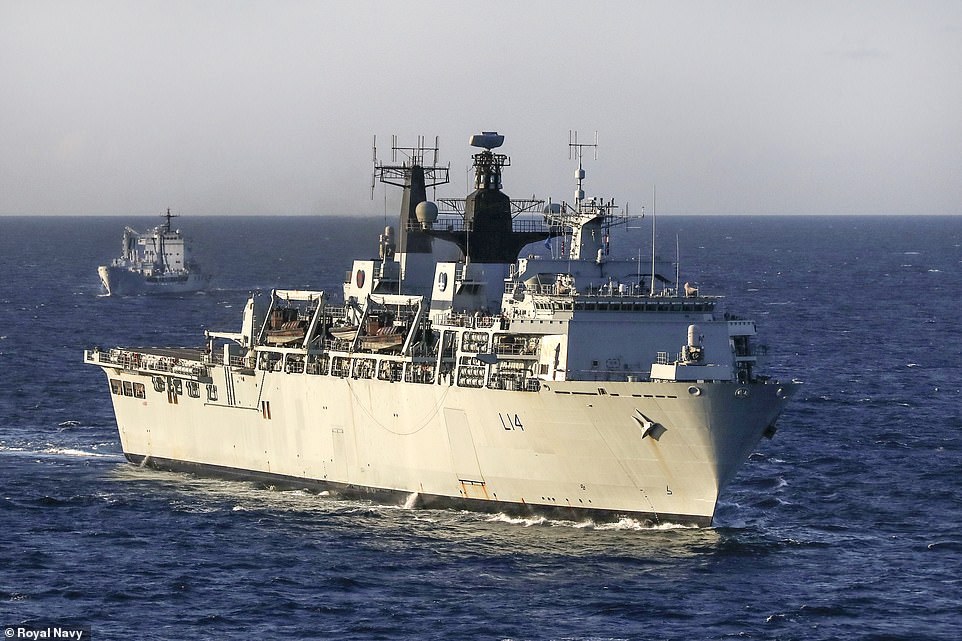 Big Lizzie has replaced HMS Albion, pictured in the Mediterranean during a three-month deployment, as the Royal Navy’s flag ship 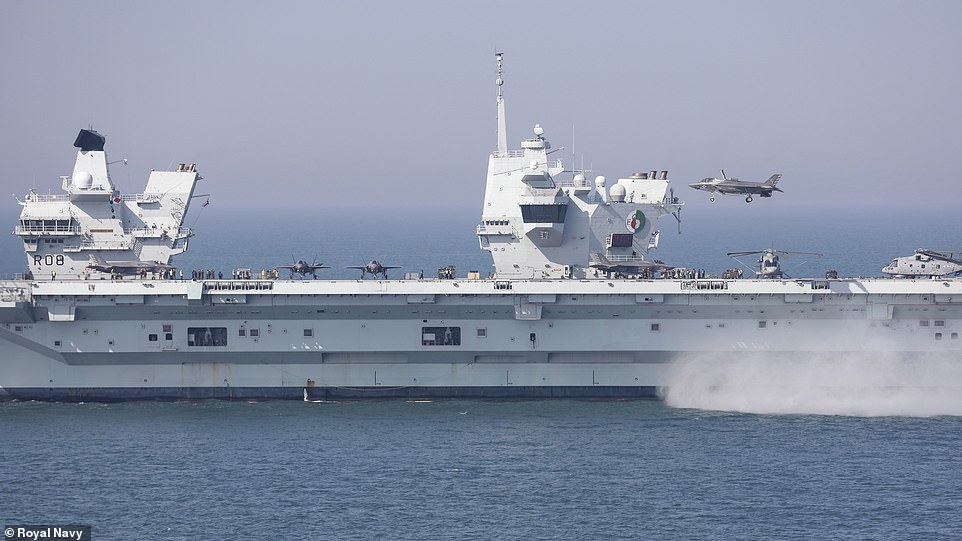 Commanding Officer Captain Angus Essenhigh said: ‘It is a fantastic privilege for Queen Elizabeth to be made the fleet flagship as we prepare to sail at the heart of UK’s very high readiness carrier strike group. We look forward to doing the nation proud as we deploy on operations for the first time.’

Last year Prime Minister Boris Johnson confirmed that HMS Queen Elizabeth will be at the centre of a carrier strike group deployment to the Mediterranean, the Indian Ocean and east Asia.

The carrier will embark F-35B jets from 617 Squadron (the ‘Dambusters’), Royal Navy Merlin helicopters, and be escorted and supported by Royal Navy Type 45 destroyers, Type 23 frigates and support ships of the Royal Fleet Auxiliary.

Assault ship HMS Albion had been flagship since March 2018 and its sister ship HMS Bulwark held the position for four years.

Albion’s commanding officer Captain Simon Kelly said: ‘While it is with some sadness that we hand over the responsibility to HMS Queen Elizabeth, we are proud to be part of the transfer which marks a new era for the Royal Navy and the nation.’ 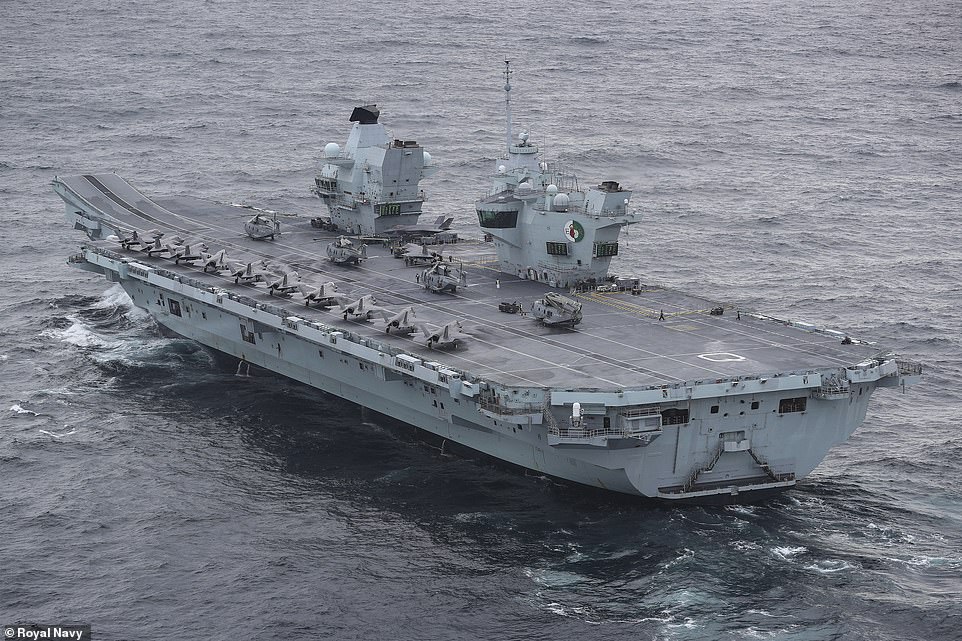 Queen Elizabeth, pictured, has a range of between 8,000 and 10,000 nautical miles and has a mix of attack jets and helicopters providing both attack and defence capability 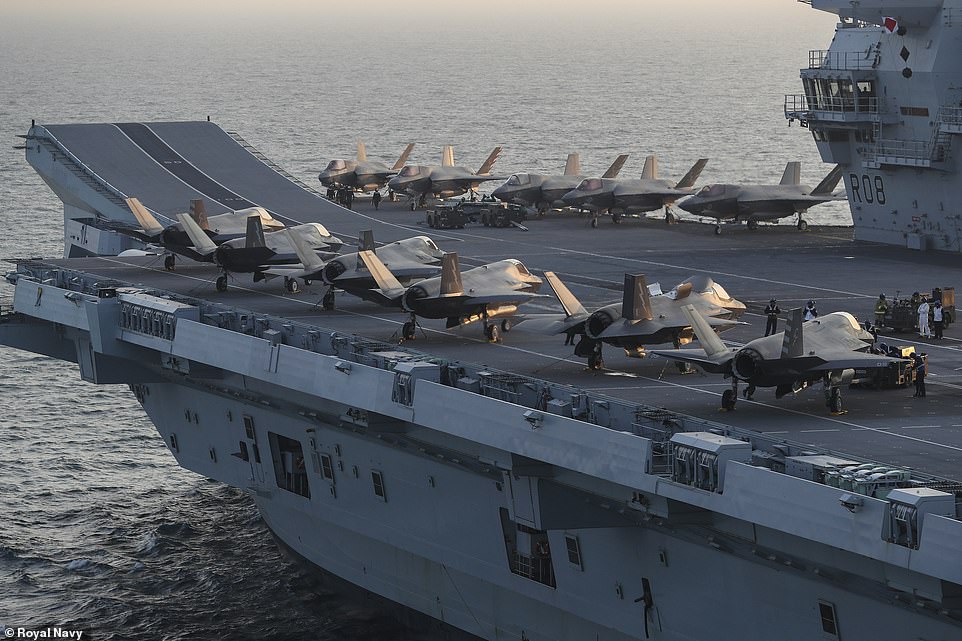 At 280 metres long, with a lifespan of half a century and a flight deck of four acres, HMS Queen Elizabeth is Britain’s largest and most powerful warship ever built.

Here are the facts and figures behind the vessel which was officially commissioned into the Royal Navy December 7, 2017

HMS Queen Elizabeth, pictured, weighs some 65,000 tonnes and has a top speed of 25 knots and a four-acre flight deck