THIS is the spectacular moment a volcano erupted in Hawaii, spewing lava fountains as high as 82ft. 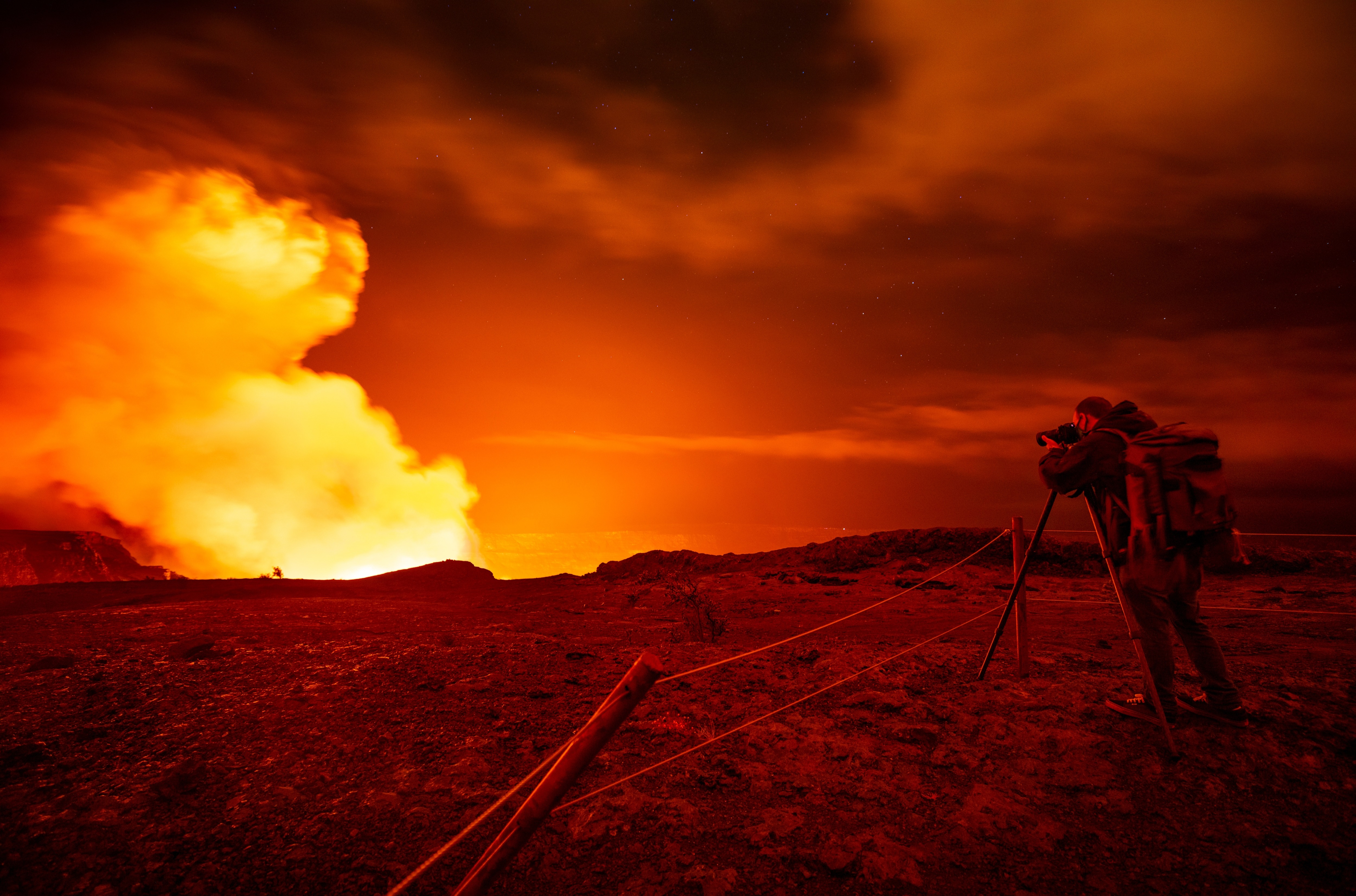 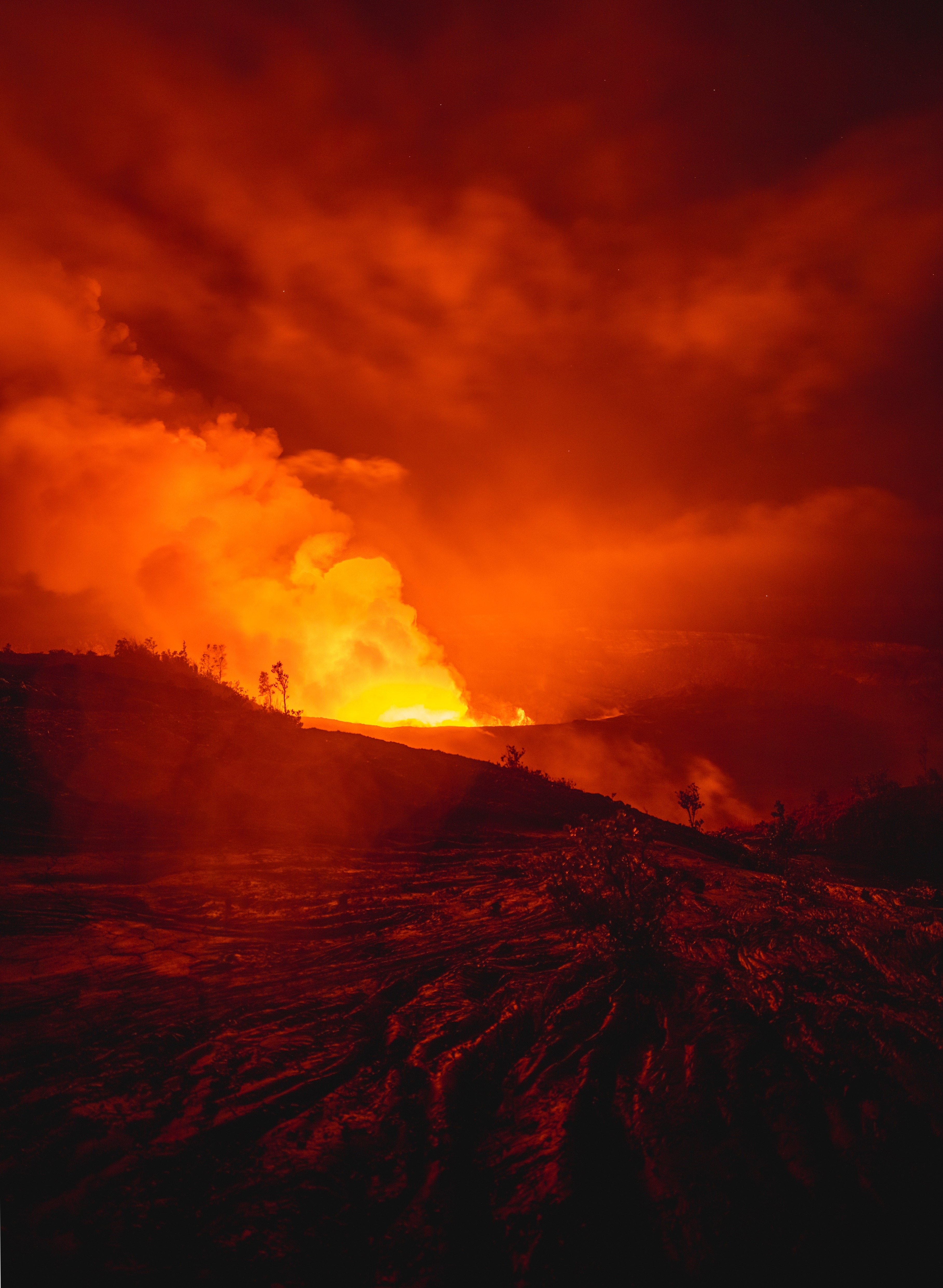 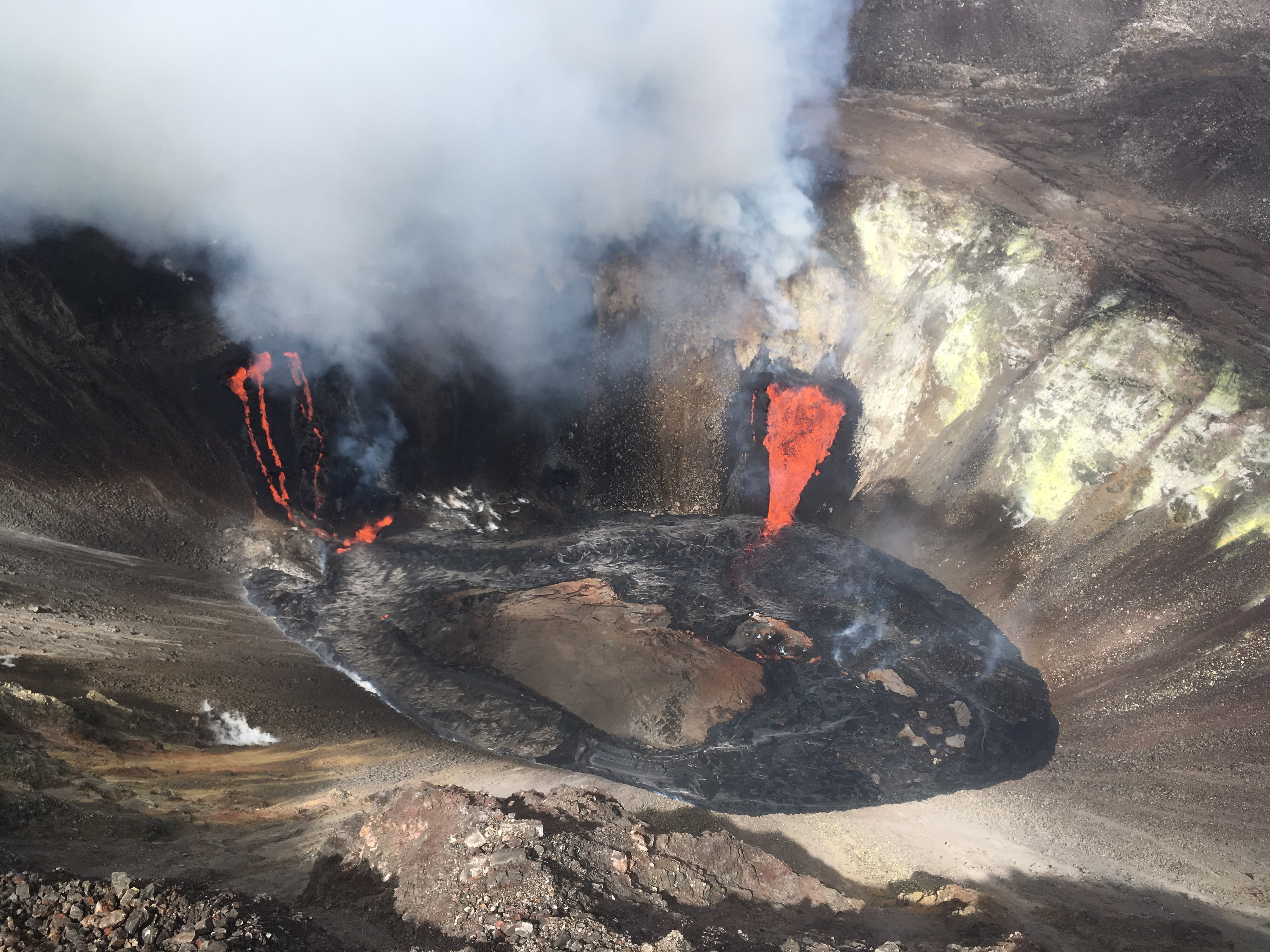 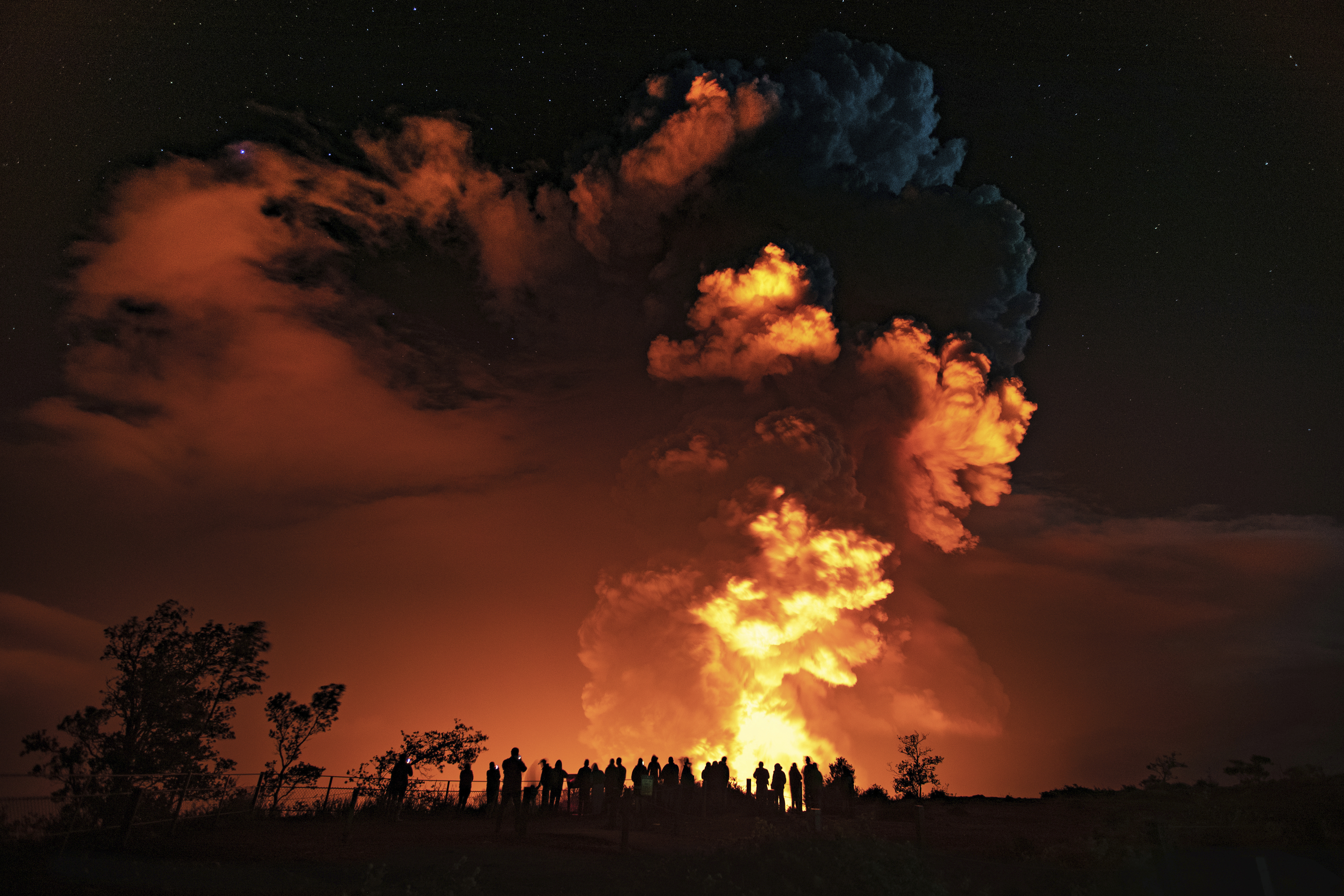 Late on Sunday night, the USGS Hawaiian Volcano Observatory (HVO) detected glow within the Halemaumau crater at the summit of Kilauea volcano.

Kilauea's 'strong' blast follows a series of earthquakes, including a 4.4-magnitude shake – with residents warned to stay indoors to avoid exposure.

Thequake was centered about 14km (8.7miles) south of Fern Forest, at a depth of 6km (4miles), prompting hundreds of residents to report the shake.

The Kilauea volcano, located within Hawaii Volcanoes National Park on Hawaii's Big Island, erupted after about 9.30pm on Sunday, the US Geological Survey confirmed.

The team is monitoring the ongoing eruption after a red aviation code was issued, warning pilots to avoid a dangerous ash cloud spewed 30,000ft into the sky.

The advisory, issued by the National Weather Service in Honolulu, warned of fallen ash from the volcano.

Excessive exposure to ash is an eye and respiratory irritant, it said.

The USGS wrote: "Due to the presence of the water lake at the summit of Kīlauea and the potential for steam-driven explosions and related hazards, HVO elevated Kīlauea’s volcano alert level to warning and its aviation color code to RED on December 20 as the progression of events was uncertain."

The warning colour has since been decreased to orange, "reflecting the less-hazardous nature of the ongoing eruption," according to the USGS. 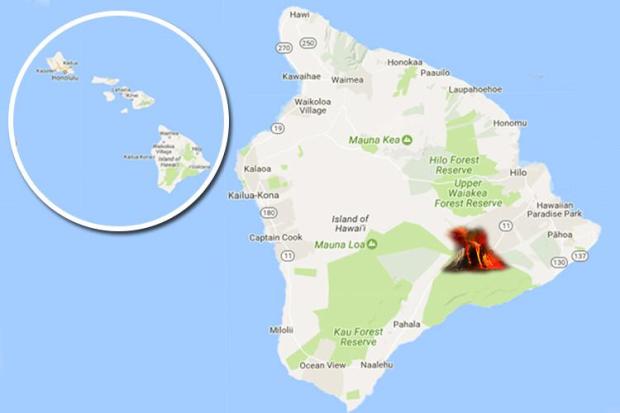 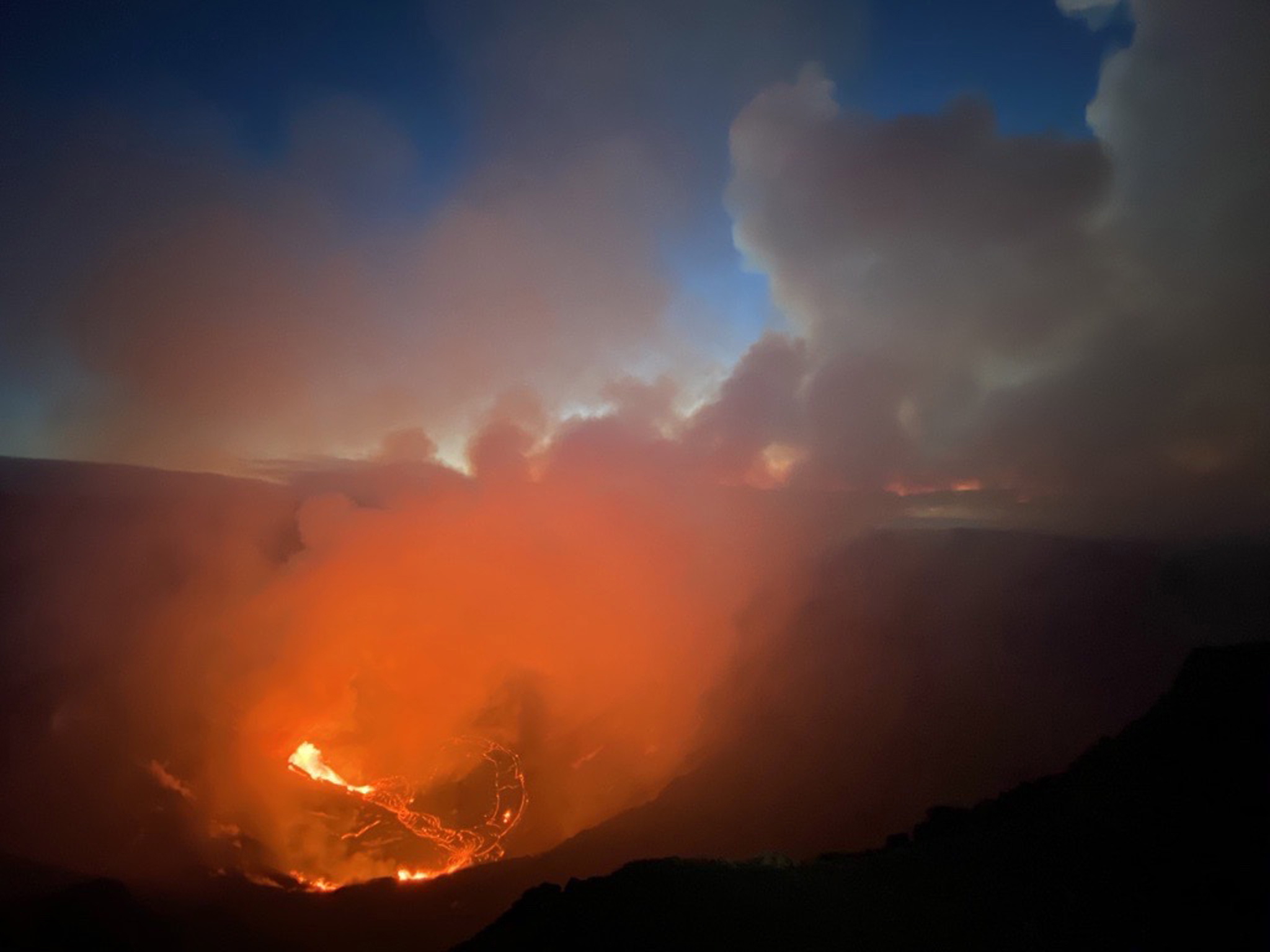 The latest USGS report says a lava lake is growing at the base of the crater.

In the last 12 hours, USGS has reported two fissures – on the north and western wall of the Halemsumsu crater – are actively feeding a new lava lake at the summit.

It is unclear how long the eruption will last.

The USGS added: "Kīlauea summit eruptions over the past 200 years have lasted from less than a day to more than a decade.

"HVO continues to monitor the ongoing eruption and all aspects of the volcano closely; HVO will report any significant changes."

Small, lightweight fragments of volcanic glass have been collected for petrological analysis, to gain insight into eruption dynamics.

A tweet from the USGS Volcanoes team said: "HVO would like to stress that the current activity at Kilauea's summit is confined to Halemaumau crater with Hawaii Volcanoes National Park."

Shield volcanoes (like Kilauea) are shaped like a bowl in the middle with long gentle slopes made by basaltic lava flows – this is the most common type of lava on Earth and consists of high amounts of iron and magnesium.

Lava domes are formed when erupting lava is too thick to flow and makes a steep mound as it piles up near the volcano's vent.

In 2019, the Associated Press wrote that for the first time in recorded history, a pond of water was discovered inside the summit crater of Hawaii’s Kilauea volcano.

This was seen as a development that could signal a shift to a more explosive phase of future eruptions.

When lava interacts with water, it can cause explosive eruptions.

Two years ago, The Sun reported how the Kilauea volcano erupted in a "large explosion" with officials warning that “ballistic blocks” weighing several tons could be fired more than half a mile across Hawaii.

On July 16, 2018, 23 holidaymakers were injured when a lava bomb crashed through a tourist boat.