Hard-left candidate Sharon Graham today defied the odds to snatch the leadership of one of Britain’s most powerful unions.

Ms Graham, who was backed by the Socialist Workers Party, will succeed Len McCluskey as general secretary of Unite.

The result is a blow for Mr McCluskey – nicknamed Red Len – who have been campaigning for his ally and former Militant member Steve Turner to take over the role.

Ms Graham is expected to work more closely with Labour leader Sir Keir Starmer than Mr Turner would have done. 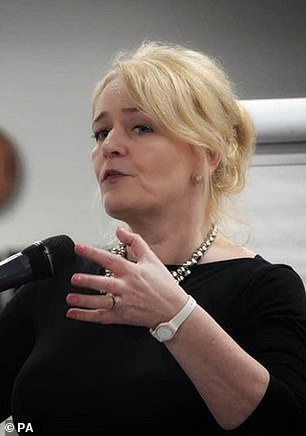 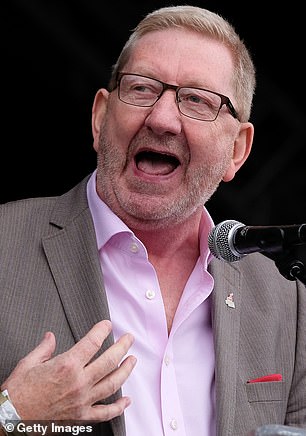 Sharon Graham, who was backed by the Socialist Workers Party, will succeed Len McCluskey as general secretary of Unite

She has said she accepts the Corbyn era is over and is seen as being more interested in workplace conditions than internal Labour Party politics.

Only around 124,000 ballot papers were returned – a turnout of approximately 12 per cent.

Ms Graham – the first woman to lead the union – said: ‘I am honoured to have been elected by our members, and I understand that the trust that they have placed in me brings with it tremendous responsibility.

‘Our members expect their union to be in their corner so I was proud to stand on a manifesto that pledged to put our members and our workplaces first. I will deliver on those promises.

‘Unite is an incredible force for good in the UK and Ireland but I am fully aware of the huge challenges our members face in the workplace.

‘As general secretary, I will put all the power of our union into defending their jobs, improving their pay and protecting their rights.’

Sir Keir tweeted: ‘Congratulations to @UniteSharon on her election as General Secretary of Unite – the first ever woman to hold that role.

‘I’m looking forward to working together to improve the lives of working people across the country.’ 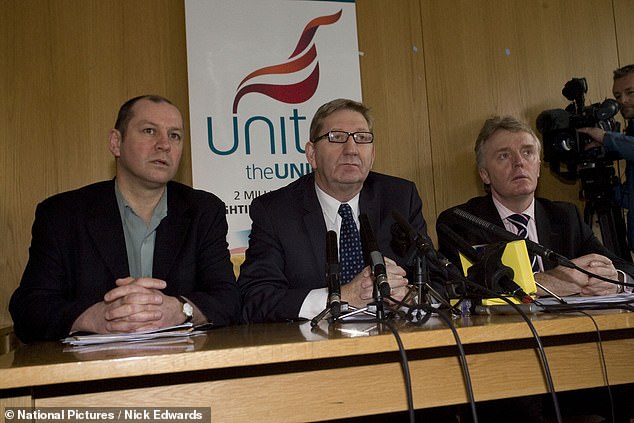 The result would be a blow for Mr McCluskey who has been campaigning for former Militant member Steve Turner (pictured left) to take over the role.

Unite is the country’s second largest union, and the biggest donor to the Labour Party.

It has been led for the last 10 years by Mr McCluksey, who was an avid supporter of Jeremy Corbyn during his failed Labour leadership.

More than one million Unite members were eligible to vote in the contest.

Sharon Graham, 51, was born and brought up in Hammersmith, west London, where she now has her own family home.

Her mother is from County Limerick in Ireland and her father is from Newcastle. They met when working in the hotel industry.

She has two sisters and a brother.

Her mother is fond of saying she always knew Ms Graham would end up fighting for her rights somehow because at the breakfast table in the battle for the cream from the milk, she almost always won against her siblings.

Ms Graham went to the local Hammersmith comprehensive and left school at 16 to work as a waitress.

She had her first experience of union work aged just 17 during an unofficial strike when she led her first successful walkout, about wages and working hours.

Ms Graham said: ‘I’ll never forget that. I was 17. How I got away with it I don’t know but I did. You can’t persuade employers just by weight of argument. The restaurant owner ignored us for months but did a deal after the walkout.’

After 20 years in Unite – firstly in the Transport and General Workers’ Union before the merger to create Unite – Ms Graham became executive officer who heads up its organising, or ‘leverage’, department.

It has been described as the industrial action wing of Unite, and has been credited with 15 major victories using strategies and tactics that go well beyond the traditional approach of strike action.

In last year’s ‘fire and rehire’ dispute with British Airways, Ms Graham said she won concessions by using MPs to support motions against the airline’s tactics and then going face to face with the executives of IAG – the parent owners of BA now – in their Europe HQ, to tell them they were about to lose landing slots at Heathrow.

Ms Graham is now leading a campaign against Amazon for union recognition after setting up a hotline for its workers.

She said: ‘These workers need a union to defend their rights.’

Other campaigns she has led have covered illegal closures, victimisation of union leaders, and the preservation of national wage bargaining.

Colleagues say that under Ms Graham’s leadership, one of the most sophisticated pay bargaining tools has been developed, giving local union officials company information to help with pay claims.

A monthly bulletin provides information about companies, prices and other economic variables which are vital to local bargaining.

Ms Graham said she has ‘simple beliefs’ that trade unions exist to fight bad employers and the way to do that is to build the strength of the union at the workplace first.

She said: I have built Unite through the organising department, at the workplace, across industries, fighting bad bosses.

‘It’s time the whole union, the whole machine of the union, was dedicated to fighting for a better deal, better pay and conditions for all union members, at the workplace.’

She is fond of saying the fight for jobs, pay and conditions is what it says ‘on the union tin’.

Asked recently about Unite’s involvement in the internal wrangles of the Labour Party, Ms Graham said: ‘As far as I know the Parliamentary Labour Party has never won a wage rise for a group of workers, never got a sacked shop steward reinstated, never led a strike.

‘My priority is to build the union as never before and to make sure the Government has to listen to the voice of ordinary workers. Besides, the mathematics are clear. There are 363 Tory MPs in the Government and 199 Labour MPs in opposition. Why are we obsessing about the Labour Party? It’s the Government we need to shift.’