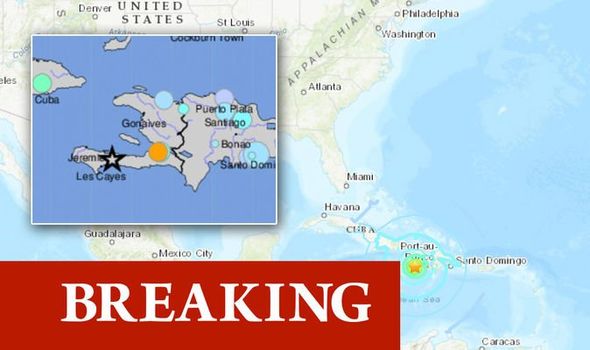 Haiti has been devastated by a huge earthquake shortly after 1pm (UK time) on Saturday, August 14. The huge ‘quake – which registered 7.2 on the Richter scale – drew numerous comparisons to the infamous 2010 disaster.

However, the 7.2 magnitude exceeds that of the disasterous 2010 earthquake, which measured a magnitude of 7.

The earthquake was registered at 1.29pm on Saturday afternoon, and was followed by a second, 5.2 earthquake 20 minutes later.

The epicentre of the earthquake was recorded on the south coast of the country.

The earthquake hit around seven and a half miles northeast of Saint-Louis-du-Sud, according to USGS.

It was slightly north of the town of Aquin, and west of Anse-a-Veau.

The USGS has also issued a tsunami warning in response to the disaster.

Haiti’s Civil Protection told CNN that there have been several fatalities associated with the earthquake.

The earthquake was also very near to the epicentre of the 2010 disaster – while registering 0.2 higher on the Richter scale.

Naomi Verneus, 34, a local resident of Port-Au-Prince, told the Huffington Post she woke to feel her bed shaking as the earthquake struck the island.

She said: “I woke up and didn’t have time to put my shoes on. We lived the 2010 earthquake and all I could do was run. I later remembered my two kids and my mother were still inside. My neighbor went in and told them to get out. We ran to the street.”