GRETA Thunberg has called on Extinction Rebellion demonstrators to defy a police order banning them from protesting in London.

The climate change activist spoke out as eco-warriors wreaked havoc this morning on the Tube, with some furious commuters dragging activists from the roof of a train carriage. 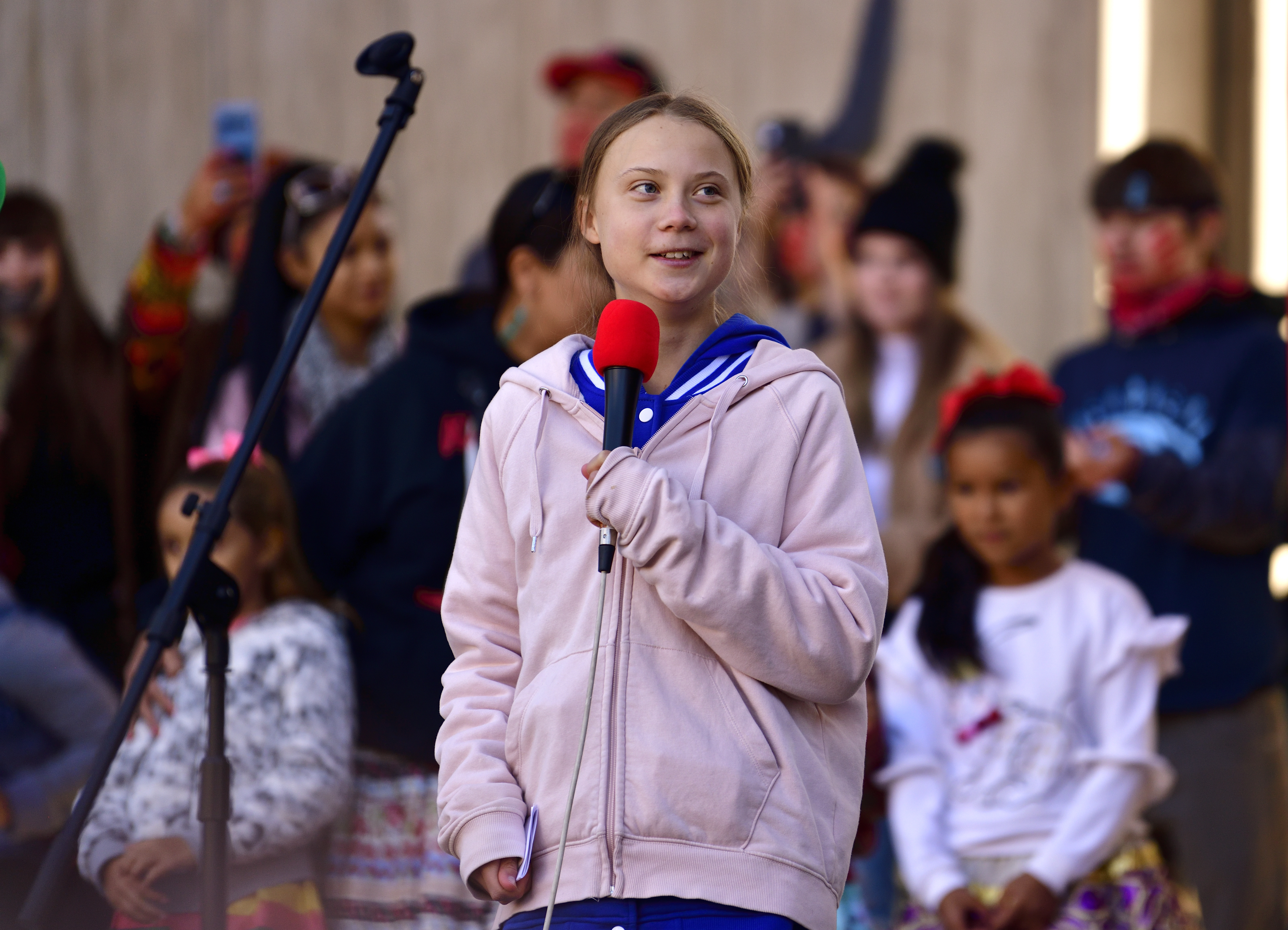 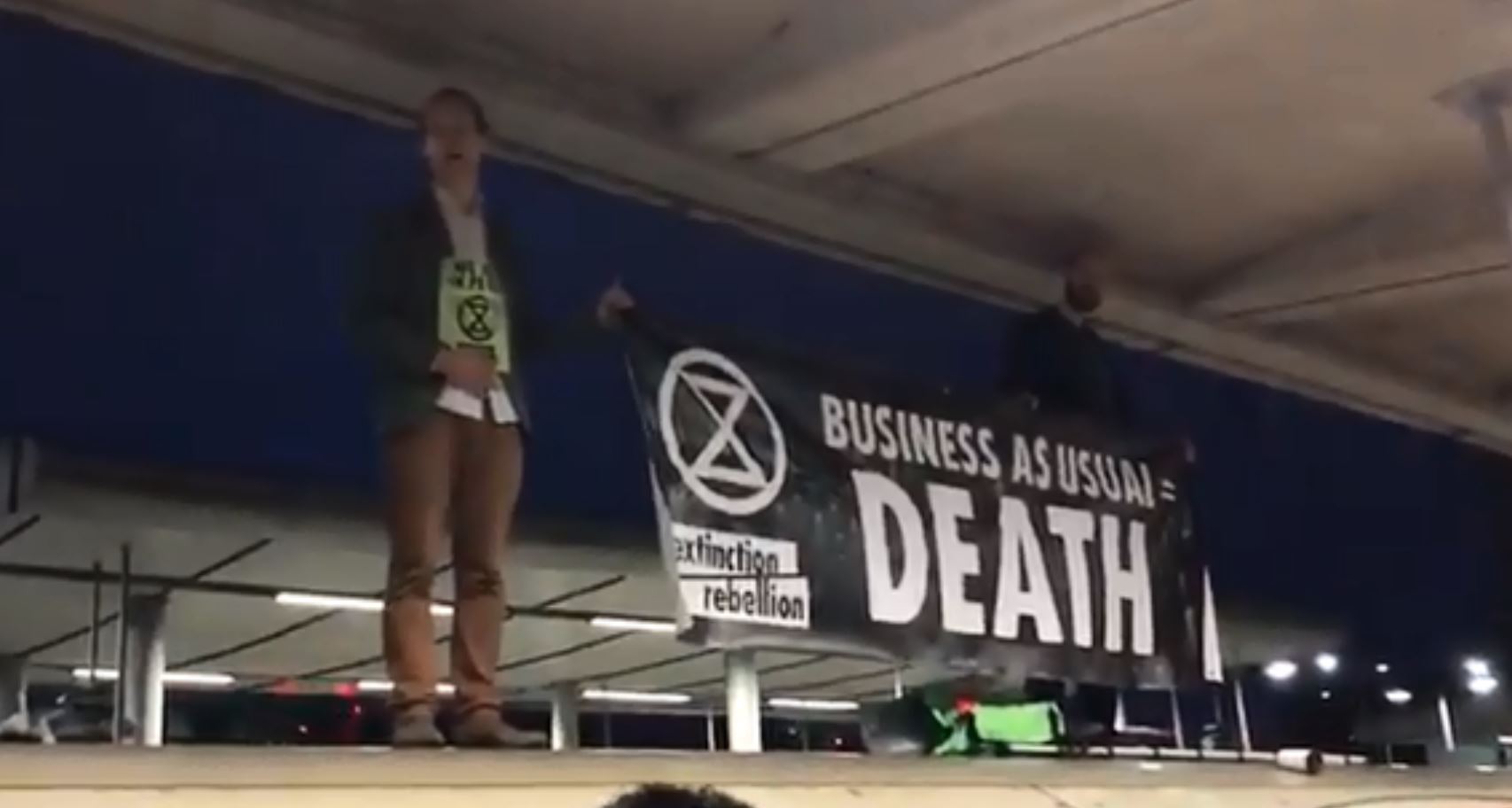 Extinction Rebellion (XR) has vowed to take legal action over the section 14 order, which has been condemned by human rights groups such as Amnesty UK as unlawful.

Under the order imposed on Monday any gathering of two or more people linked to XR’s Autumn Uprising is banned.

This came after the local authority lost their patience with the group’s public nuisance tactics, which were disrupting people’s lives and draining the resources of an already hard-pressed police force.

But Greta Thunberg, a prolific campaigner for climate change aged just 16, spoke out on Instagram saying the group should break the law to achieve their aims.

Greta said: “If standing up against the climate and ecological breakdown and for humanity is against the rules then the rules must be broken.”

Police have banned peaceful, nonviolent Extinction Rebellion protests in London. Amnesty UK says it is “an unlawful constraint of our rights to #FreedomofExpression and peaceful assembly.” If standing up against the climate and ecological breakdown and for humanity is against the rules then the rules must be broken. #ExtinctionRebellion #nonviolence #climatebreakdown #ecologicalbreakdown

Police have banned peaceful, nonviolent Extinction Rebellion protests in London. Amnesty UK says it is “an unlawful constraint of our rights to #FreedomofExpression and peaceful assembly.” If standing up against the climate and ecological breakdown and for humanity is against the rules then the rules must be broken. #ExtinctionRebellion #nonviolence #climatebreakdown #ecologicalbreakdown 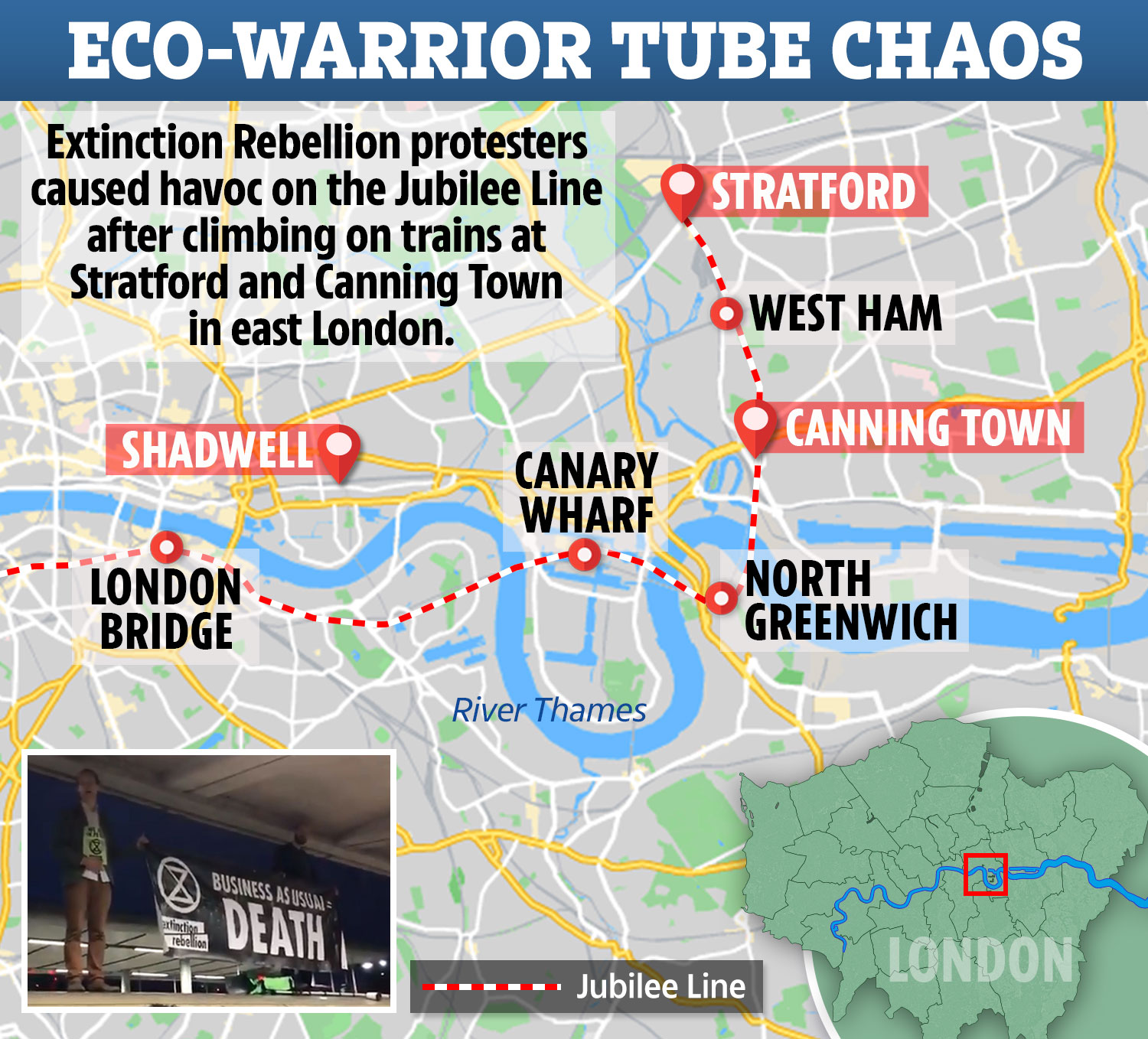 COMMUTERS FIGHT BACK AGAINST ECO-WARRIORS

More than 1,600 people have been arrested and detained since XR began a two-week protest in London to urge the government to urgently accelerate action to battle global warming.

But commuters fought back against Extinction Rebellion environment protesters on this morning, as an activist was dragged to the ground after climbing on top of a Tube train in east London.

Video shared on social media showed a number of protesters on top of the train at Canning Town station.

Holding a sign which read "Business as usual = death", the protesters were met with shouting from angry commuters on the platform.

According to one witness, one man yelled "I need to get to work, I have to feed my kids".

In another clip, a man was seen dragging one of the activists down by his foot.

I need to get to work, I have to feed my kids

The British Transport Police said in a statement: "Shortly after 7am this morning we were called to simultaneous action by Extinction Rebellion at Stratford, Canning Town and Shadwell.

"Protesters had dangerously obstructed Jubilee Line and DLR services by either climbing on top of services or by gluing themselves to the trains.

"Four arrests have been made in connection to the Stratford and Canning Town incidents, with those detained being taken to police custody. Specialist Protest Removal Teams remain at Shadwell station, and are working to resume services as soon as possible.

"We continue to urge protesters to not target the London Underground network.

"This is dangerous, not only for protesters but for commuters.

"We have increased our patrols on the London Underground and at other rail hubs throughout London." 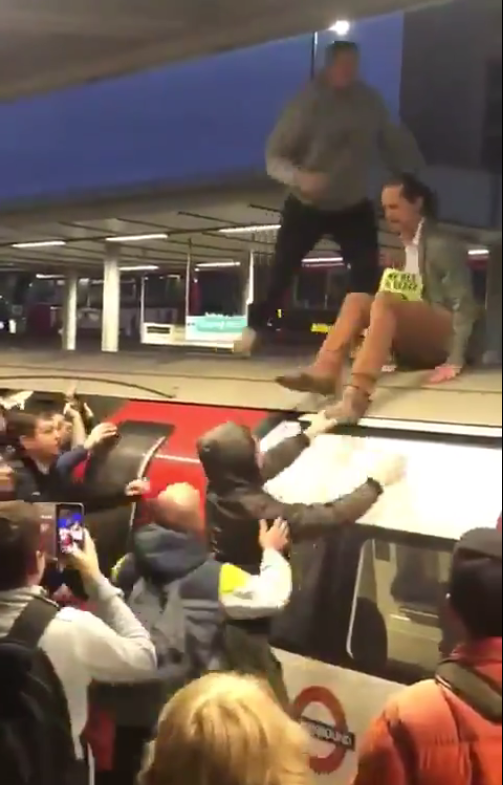 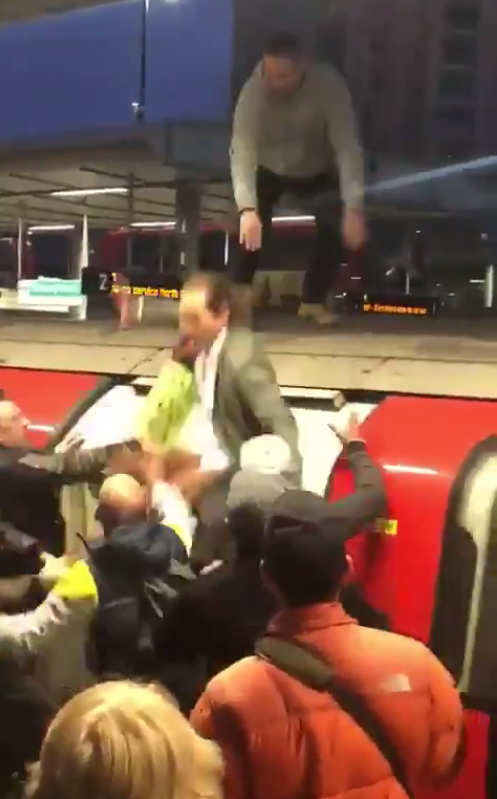 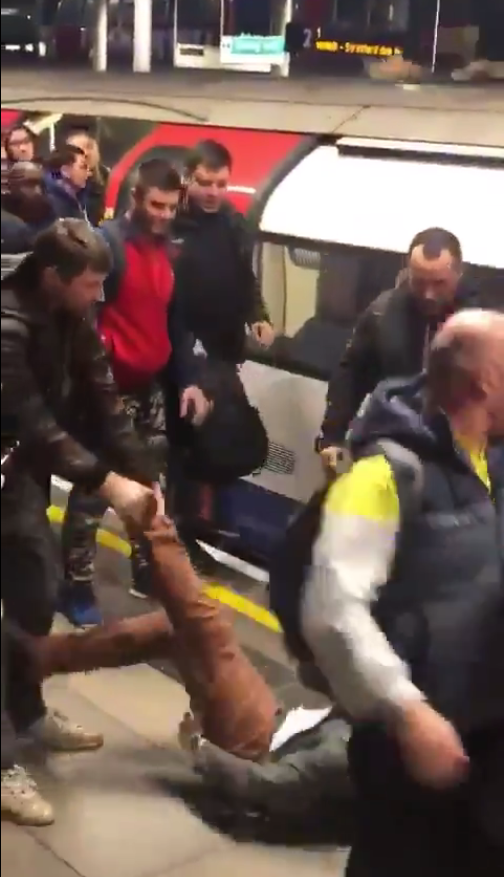 Who is Greta Thunberg? 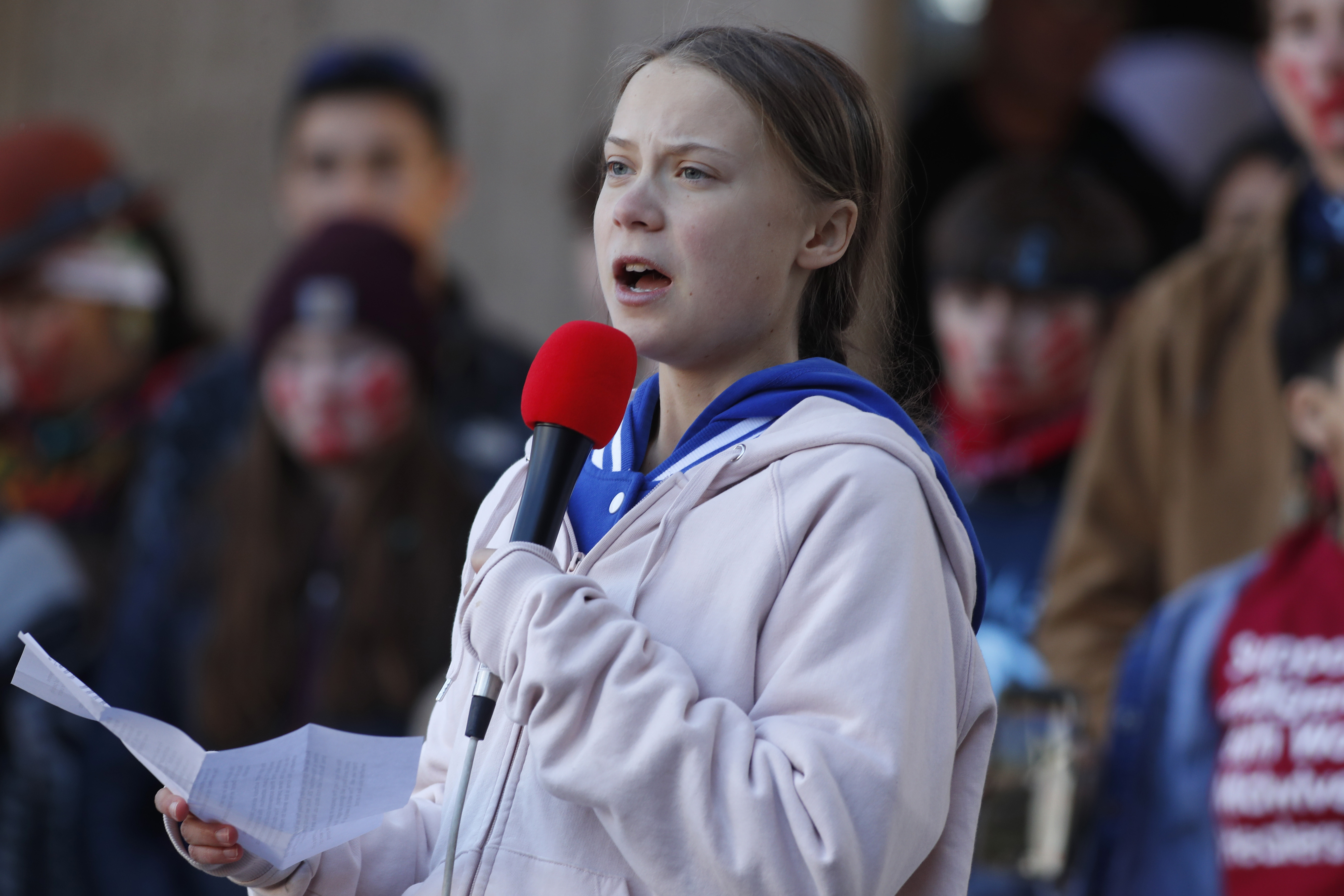 GRETA Thunberg, a prolific campaigner for climate change, has been named as one of the world's 100 most influential women of 2019 by the BBC.

The 16-year-old from Stockholm, Sweden first hit the headlines in 2018 when she inspired international youth climate strikes and spoke at the Extinction Rebellion protests before she met UK politicians. Here's the latest on the teenager and her UN Climate summit address.

Her strike inspired tens of thousands of students from around the world to join her #FridaysforFuture demonstrations – skipping school every Friday to protest climate change.

Her work in the UK has included meeting politicians from across the spectrum in Westminster as the Extinction Rebellion protests took place outside.

She told them her future and those of other young people had been "sold" adding: "We probably don't even have a future any more."

The Swedish teenager grabbed the world's attention when she staged a School Strike for Climate in front of the Swedish Parliament in August 2018.

Extinction Rebellion spokesperson Fergal McEntee, who was interviewed on LBC, conceded this morning's demonstrations at London Underground and DLR stations were a "huge own goal".

A government spokesman said: “The UK is already taking world-leading action to combat climate change as the first major economy to legislate to end our contribution to global warming entirely by 2050.

“While we share people’s concerns about global warming, and respect the right to peaceful protest, it should not disrupt people’s day-to-day lives.”