Dutch far-right politician and anti-Islam campaigner Geert Wilders said Twitter has temporarily blocked his account following remarks he made about a political rival.

Wilders, who faces threats against him by Islamists, relies heavily on Twitter to communicate with his supporters.

He has 811,000 followers, second only to Prime Minister Mark Rutte among Dutch politicians. 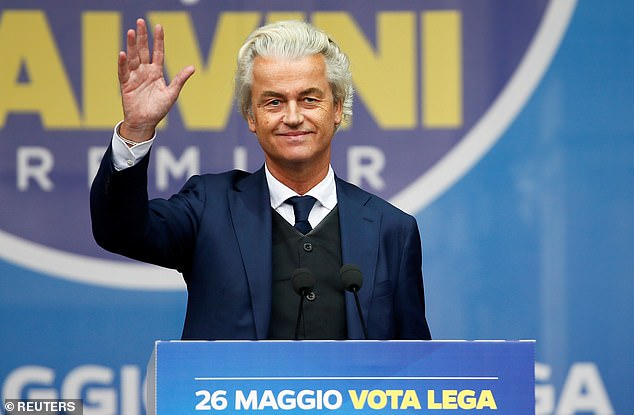 He said in a statement today: ‘Twitter often tolerates death threats against me, but not a factual tweet by me about a colleague. Madness!’

A spokesman for Wilders’ Freedom Party sent a screenshot of his account showing the ban, which was due to expire in about eight hours. 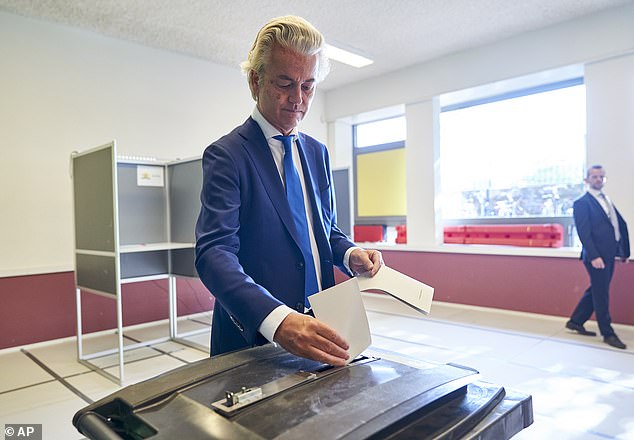 The tweet that led to Wilders’ block referred to D-66, a progressive centre-left party as ‘suckers …who import ever more Islam and then weep crocodile tears over the consequences, such as honour killings’.

Wilders is currently appealing a 2016 conviction for inciting discrimination for an incident in which he led followers in chanting they wanted ‘fewer! fewer! fewer’ Moroccans in the Netherlands.

How did Geert Wilders raise tensions in Holland after launching a cartoon competition for people to submit drawings of the prophet Muhammad?

Tensions in the Netherlands rose dramatically last year after far-tight politician Geert Wilders launched a cartoon competition for people to submit drawings of the prophet Muhammad.

Mr Wilders reacted angrily when Hardi N, an Iraqi-born jihadi alleged to be the ring-leader of the foiled plot, was freed in 2014 on his return to Holland from Syria and was set free by the Dutch courts.

Judges allowed the suspected jihadi to walk the streets and be monitored with an electronic tag.

In August last year, a 19-year-old Afghan with a German residence permit stabbed and injured two American tourists at Amsterdam’s busy Central Station before being shot.

The Dutch prosecutor said he had chosen the Netherlands for the attack believing Islam to be ‘frequently insulted’ in the country.

The Amsterdam attack came after a Taliban call for attacks on Dutch troops after Mr Wilders organised the Prophet Muhammed cartoon competition as many Muslims consider images of the prophet to be blasphemous.

The likelihood of a terror attack in the Netherlands ‘remained substantial’, the Dutch anti-terror agency NCTV said at the time, with terror threat levels then at level four out of five.

The day before the attack on August 31, Mr Wilders cancelled the competition following death threats and large-scale protests in Pakistan.

Terror-related arrests in September came three months after two men were arrested in Rotterdam on suspicion of preparing attacks in France and in the Netherlands.

Prosecutors said earlier they were ‘close’ to launching their attack but there had been no mention of what the target in France might have been.

In the Netherlands the pair arrested in July are said to have staked out and ‘identified several possible targets’ in Rotterdam, including ‘a police station and the Erasmus Bridge’, the country’s second largest.

He was acquitted of hate-speech in a closely watched trial in 2016 but convicted after the judges said in their verdict: ‘The inflammatory character of the way in which the statements were made have incited others to discriminate people of Moroccan origin.’

But they added that there was ‘insufficient evidence’ that his words at an election rally in 2014 amounted to incitement to hatred. 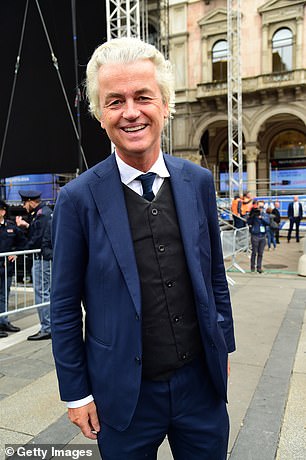 Wilders is currently appealing a 2016 conviction for inciting discrimination

The judges also dismissed the prosecution’s request to impose a 5,000 euro fine on the far-right MP.

‘In this case, the most important question is whether Wilders has crossed a line. This judgement has answered that question,’ the judges said in their verdict.

‘Therewith, the chamber finds that justice has been done. Consequently, no punishment is imposed.’

At the time, Wilders used his favoured tool Twitter to react, tweeting a number of responses to the verdict as well as posting personal message on his YouTube account.

Wilders made it clear immediately that he intended to appeal his conviction, as he believed it was ‘a big loss for freedom of speech’.

Wilders, who was not present at the trial, commented on the character of the judges who delivered his verdict in 2016 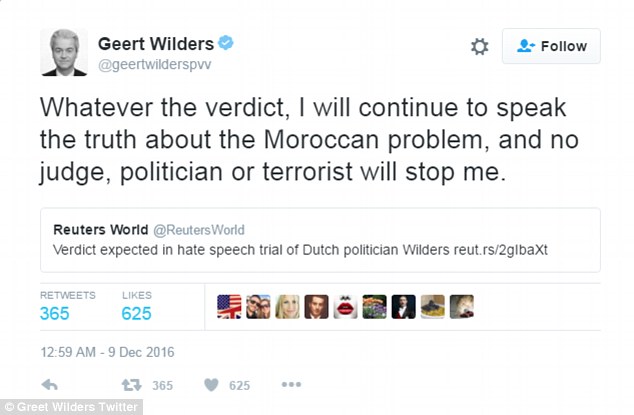 Just before the verdict in 2016, Wilders tweeted that he would ‘continue to speak the truth about the Moroccan problem’