MORE than 500 demonstrators have blocked roads and branded world leaders “liars” as Extinction Rebellion mount a protest near the G7 summit in Cornwall.

Supporters of the climate activist group gathered in St Ives as leaders kicked off the three-day G7 summit in Carbis Bay. 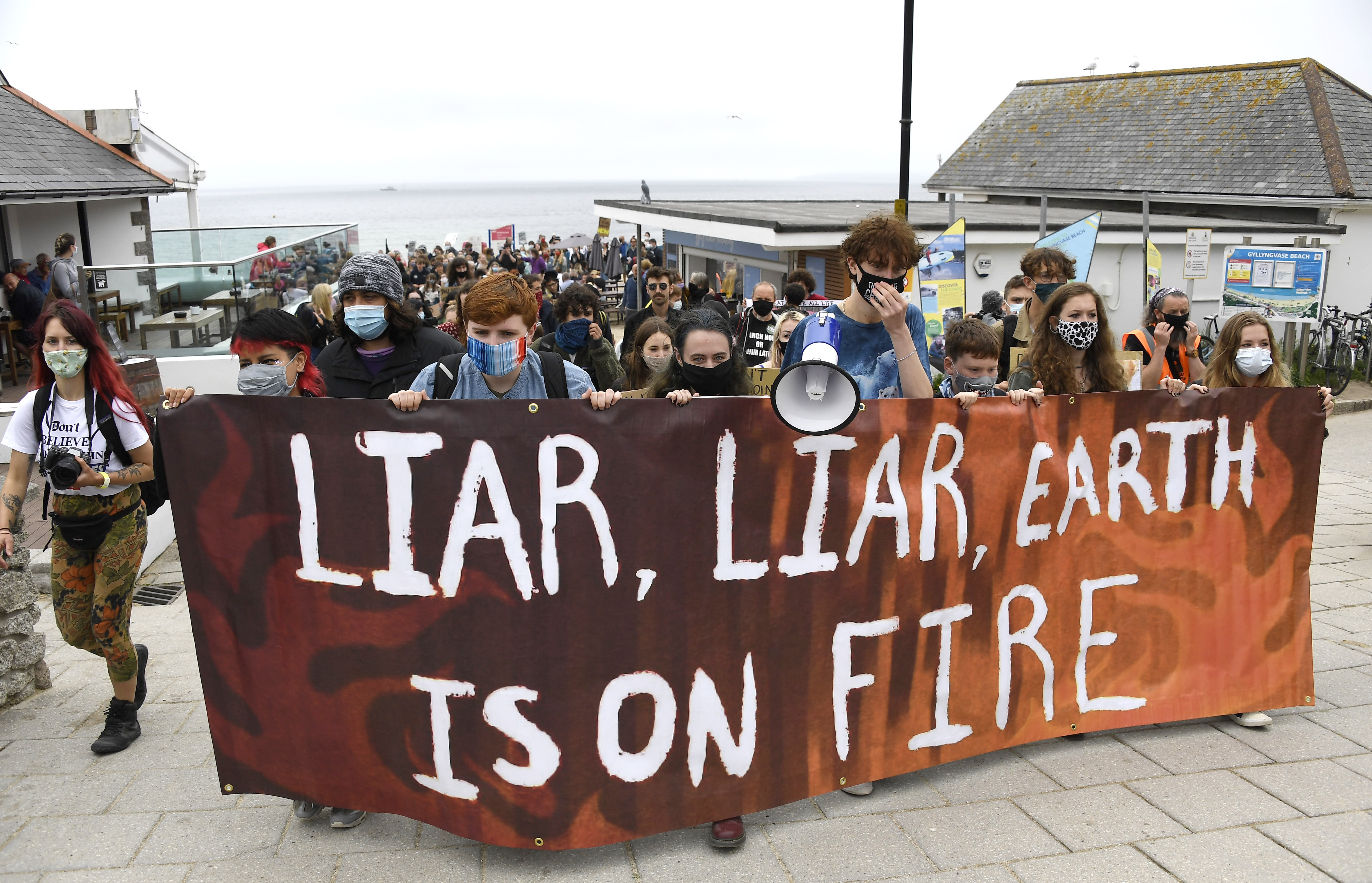 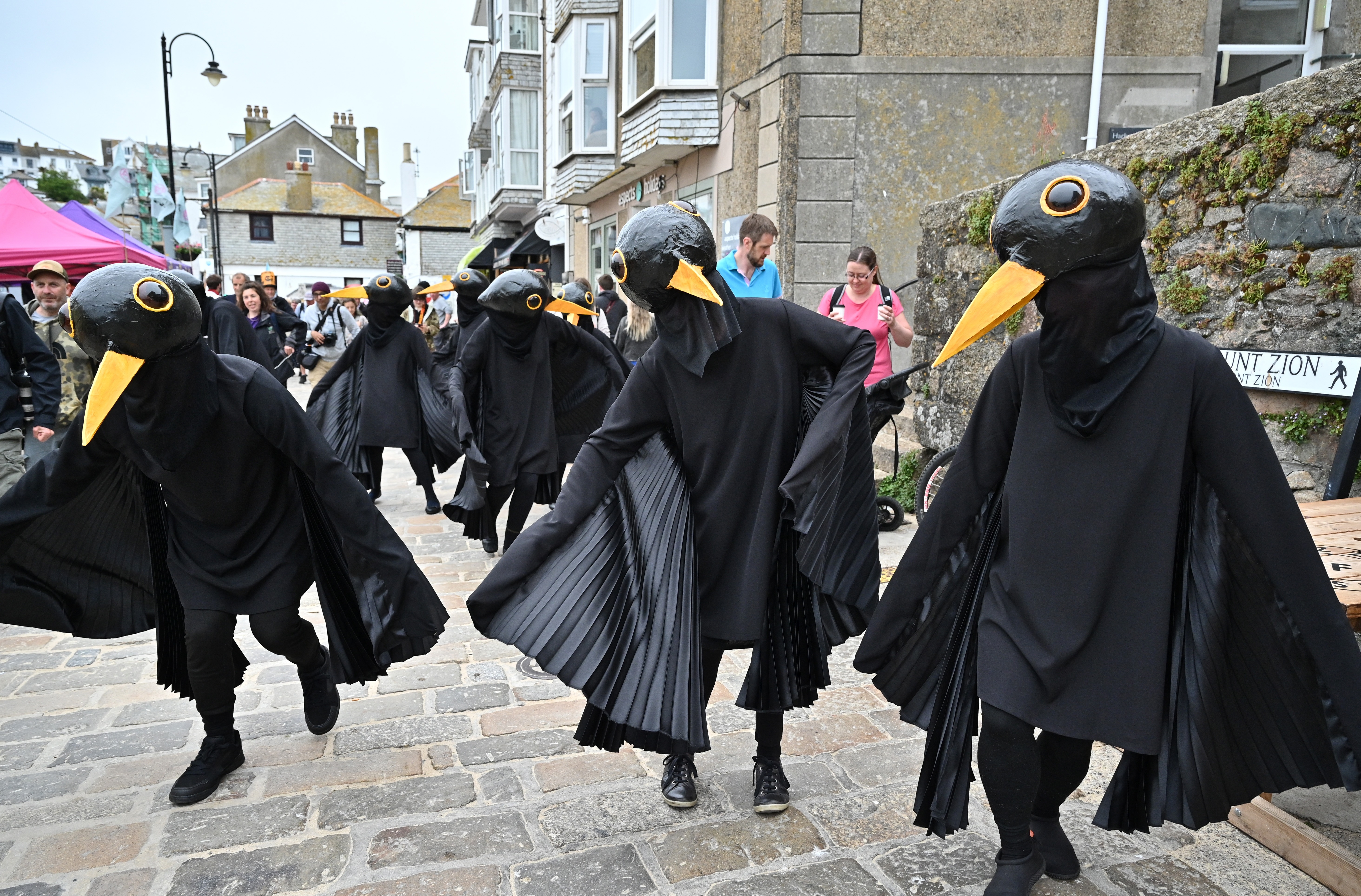 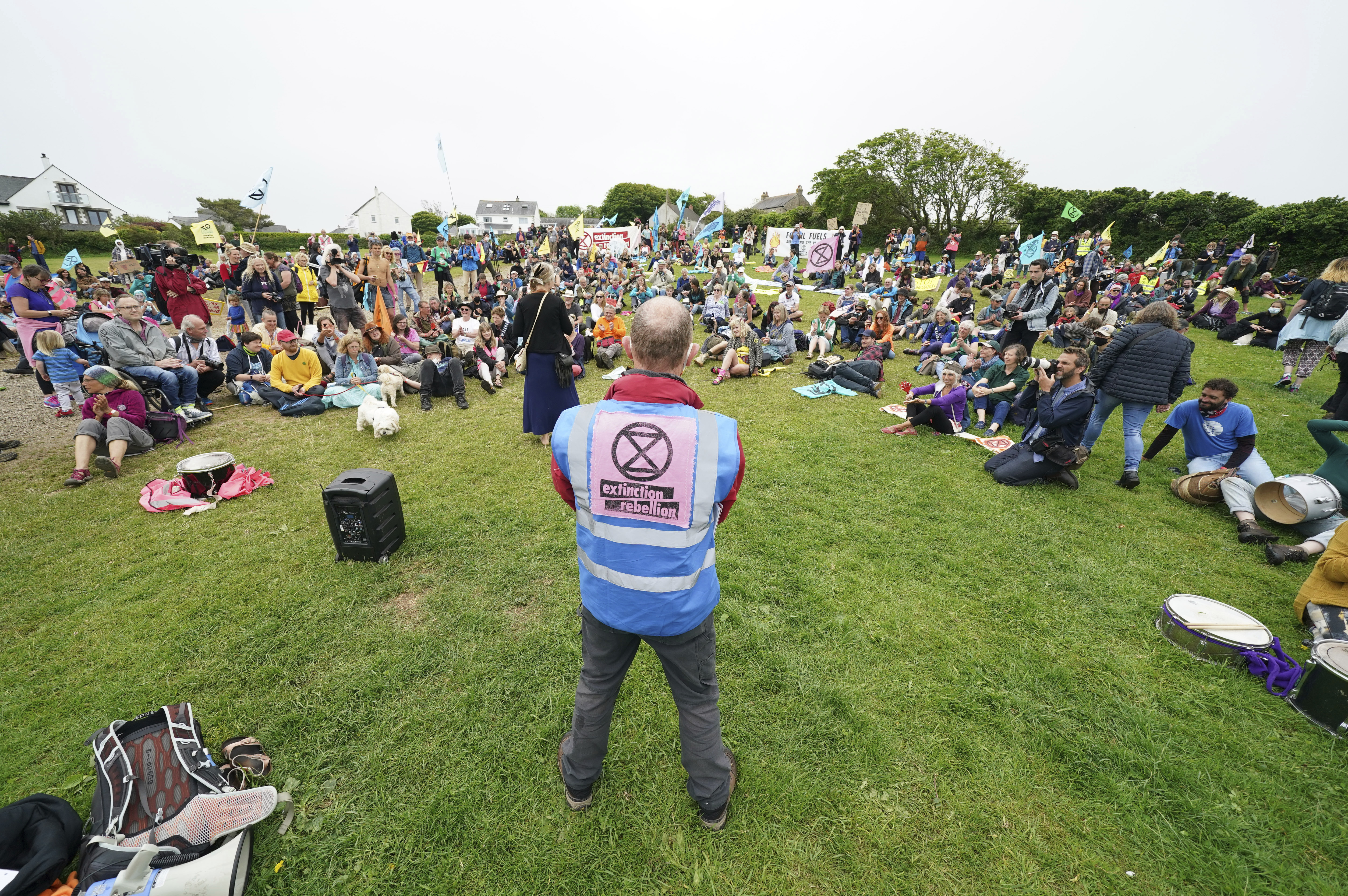 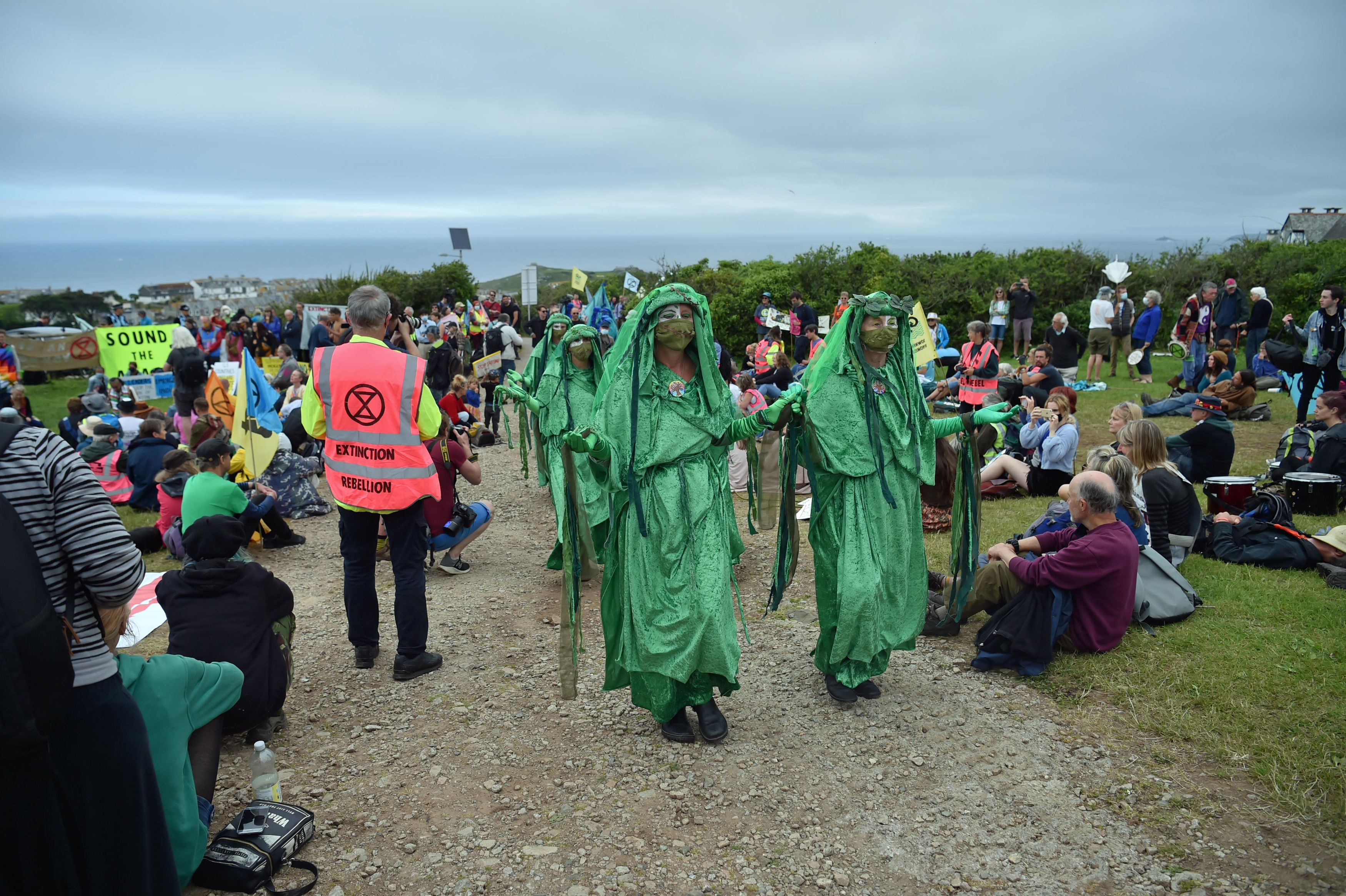 Members of Extinction Rebellion gave speeches in the town’s leisure centre before taking to the streets.

It was the first of a series of demonstrations the group is holding throughout the three-day event in the seaside town.

Extinction Rebellion says the protests are in response to G7 nations' "failure to respect the global climate commitments they made in Paris in 2015" and "to urge the leaders meeting at Carbis Bay in Cornwall to act immediately to address the climate and ecological emergency".

Members of the group said they were there to represent the threat to seas and wildlife if more decisive action is not taken to combat climate change.

Others were wearing XR's famous symbol as patches on their clothes.

Flags could also be seen which said "G7 drowning in promises" and "Action not words".

The members then led a procession through St Ives. 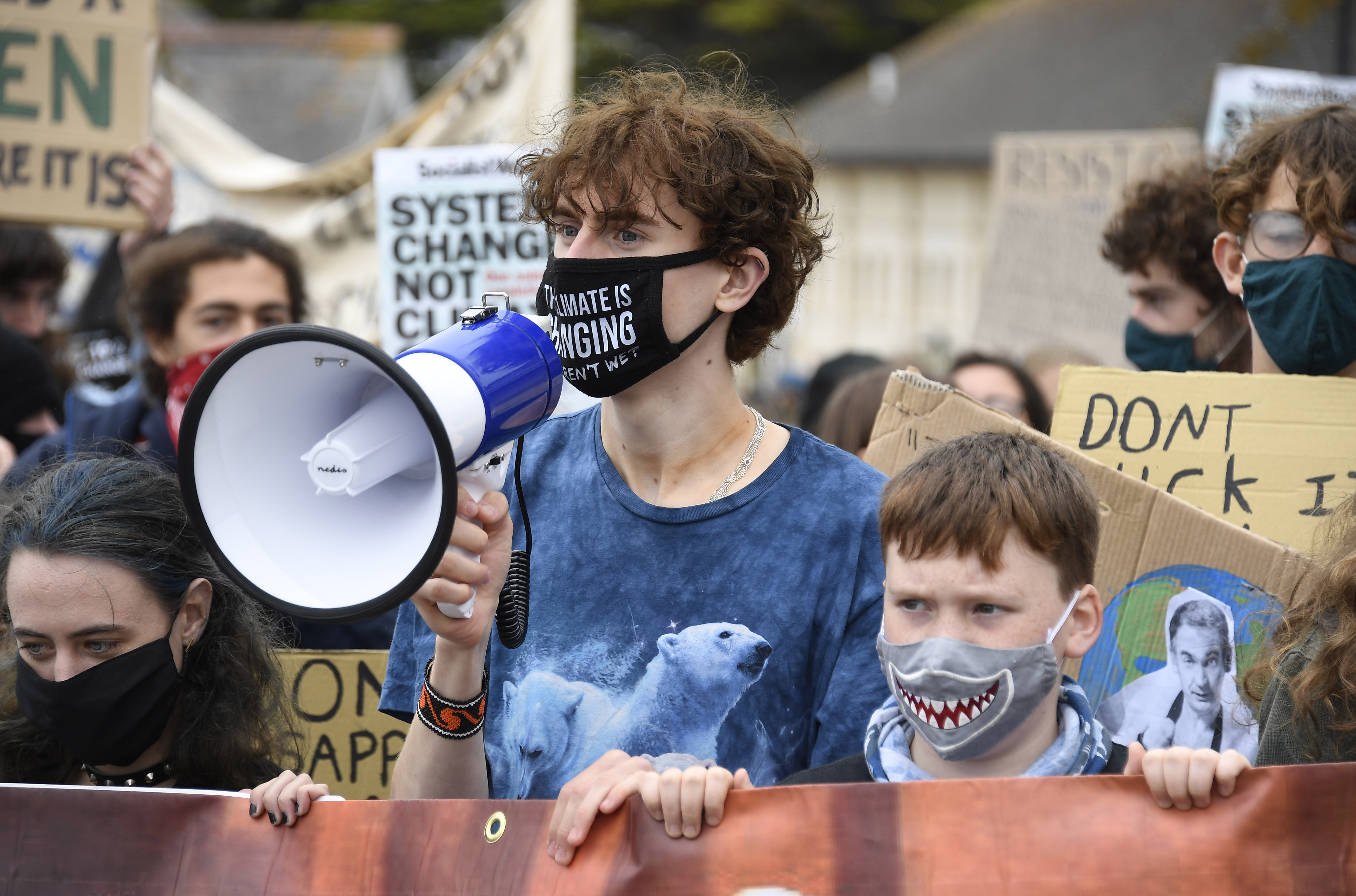 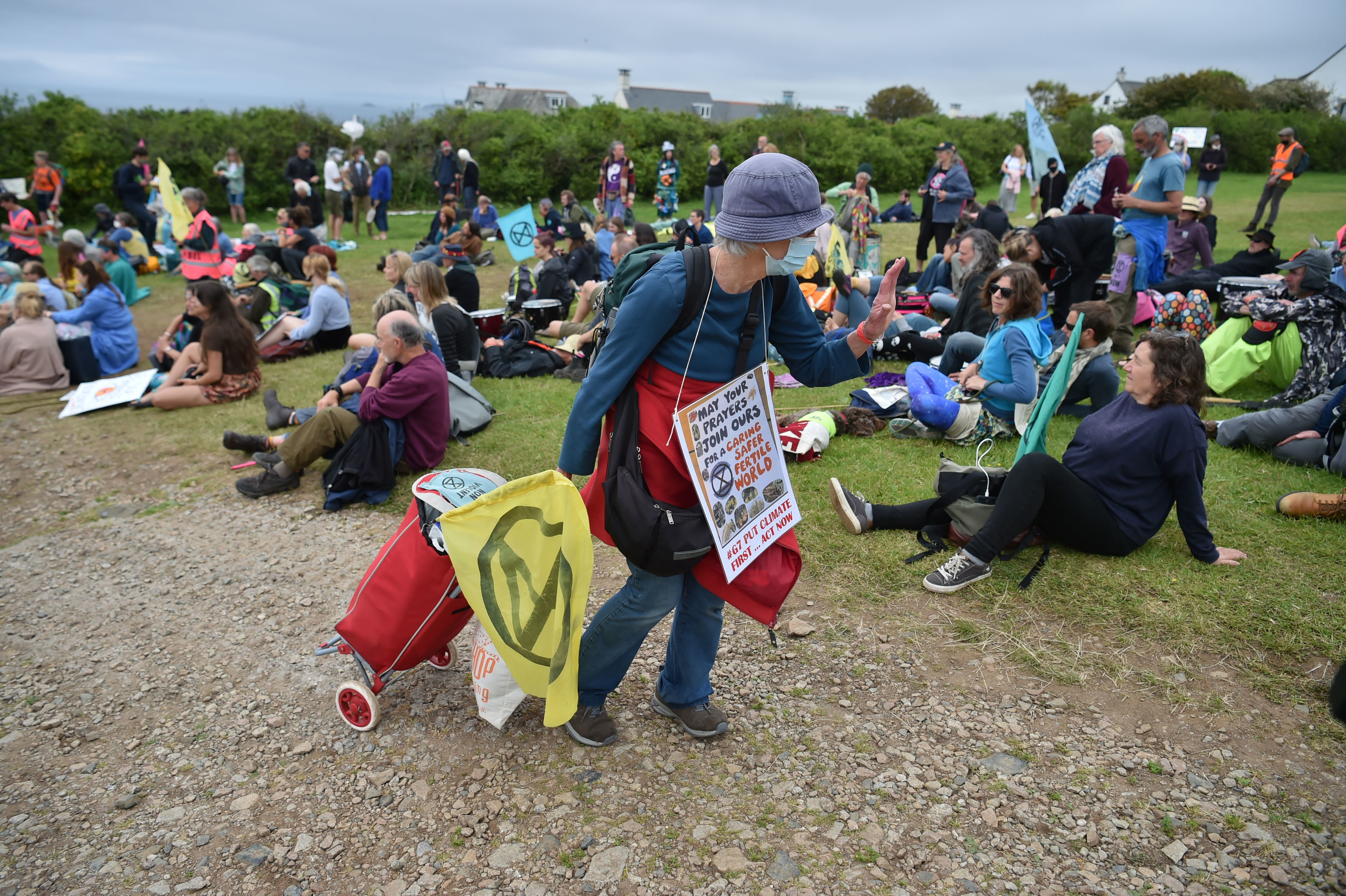 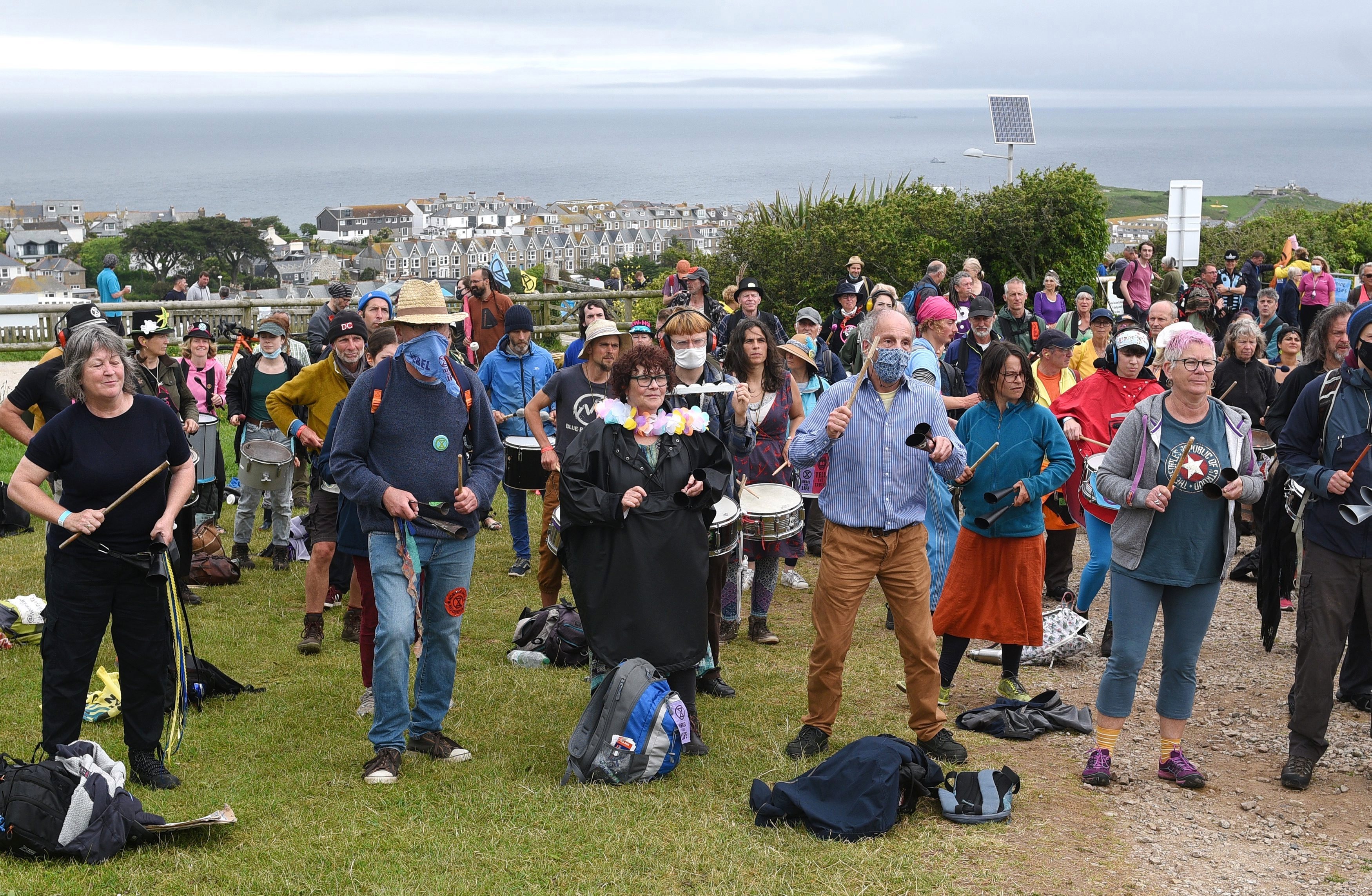 The colourful procession through St Ives was accompanied by police officers.

Activists drummed a continuous beat along with chants of "act now" and "sound the alarm".

Several local residents came outside of their homes to watch the procession.

They could be seen filming it on their phones and taking pictures.

Devon and Cornwall Police said in a Twitter message they were monitoring the situation and warned locals to expect delays in the area, particularly the town centre.

Some demonstrators also held a silent protest while others gathered on the town's beach putting on cardboard cut outs of the faces of the world leaders. 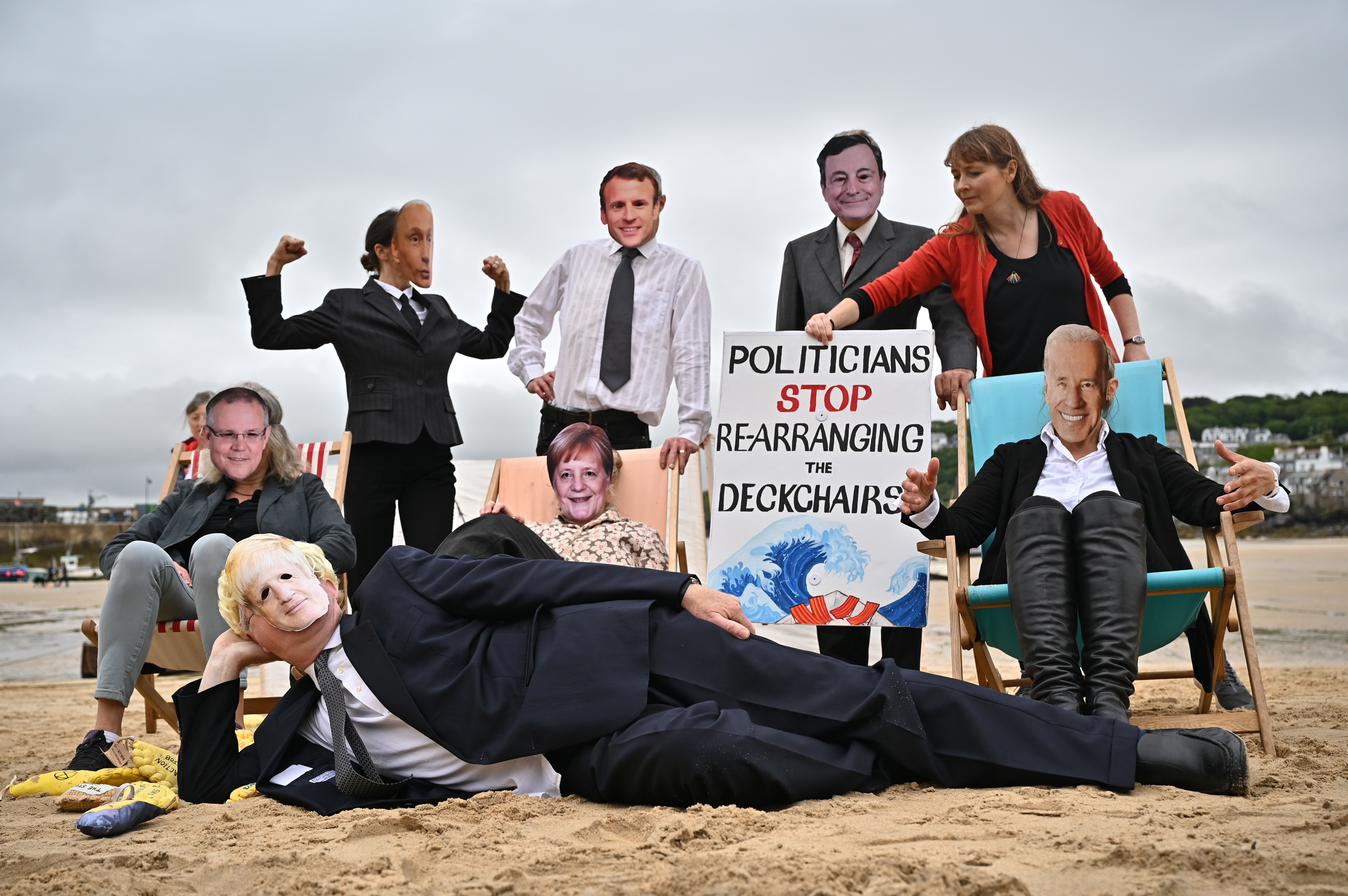 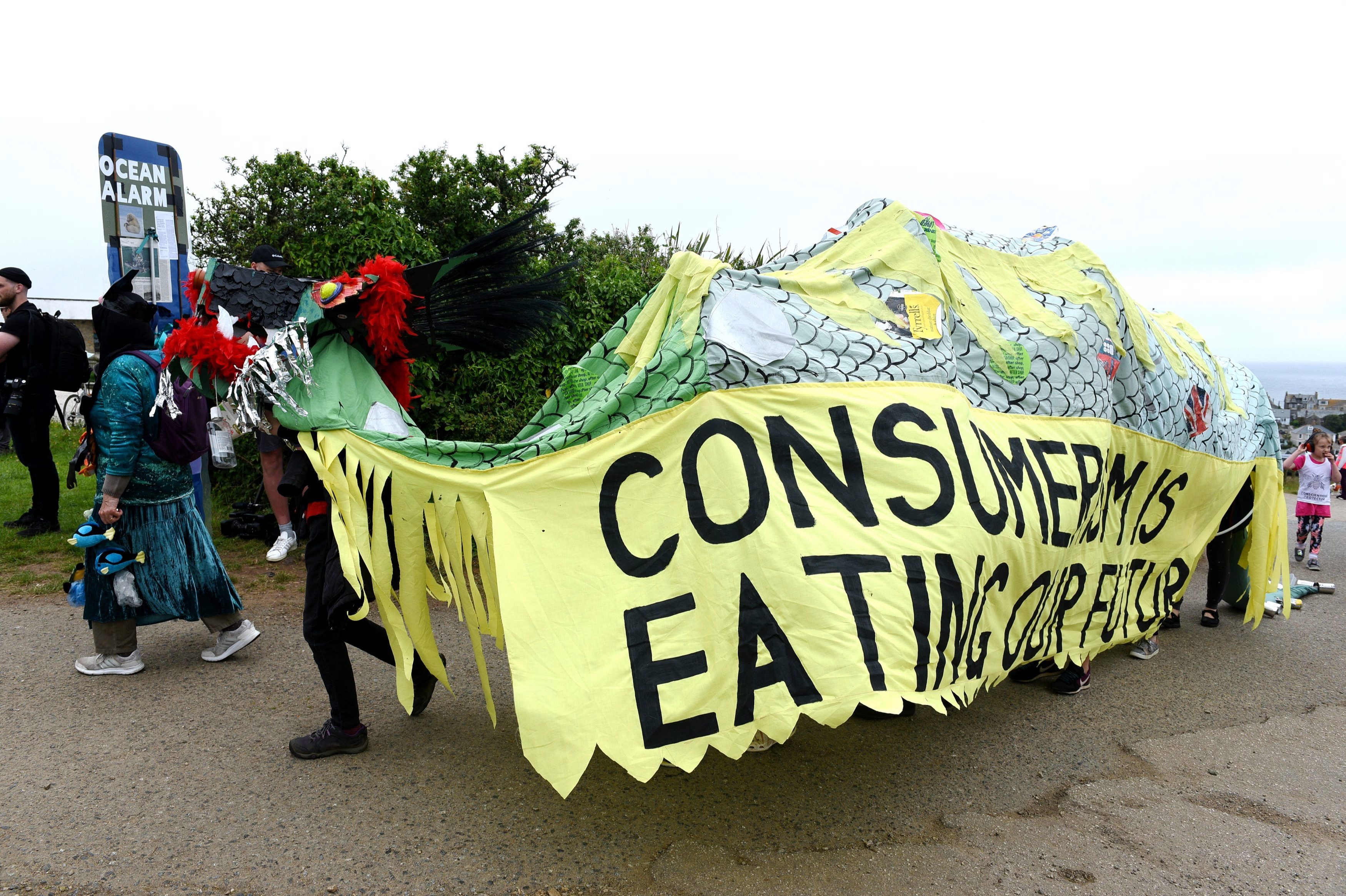 "I'm down here for the duration of the summit, I learnt about the climate emergency in January 2019 and I've not been able to focus on anything since," she told PA.

"I've absorbed and understood the dire warnings of the world-leading scientists, academics and David Attenborough. I'm the mother of an eight-year-old son and there's constant contradictions of their words with their actions. As a result I'm terrified for the future of my child and all our children.

"I think it's wonderful to see so many people coming here today in creative ways." 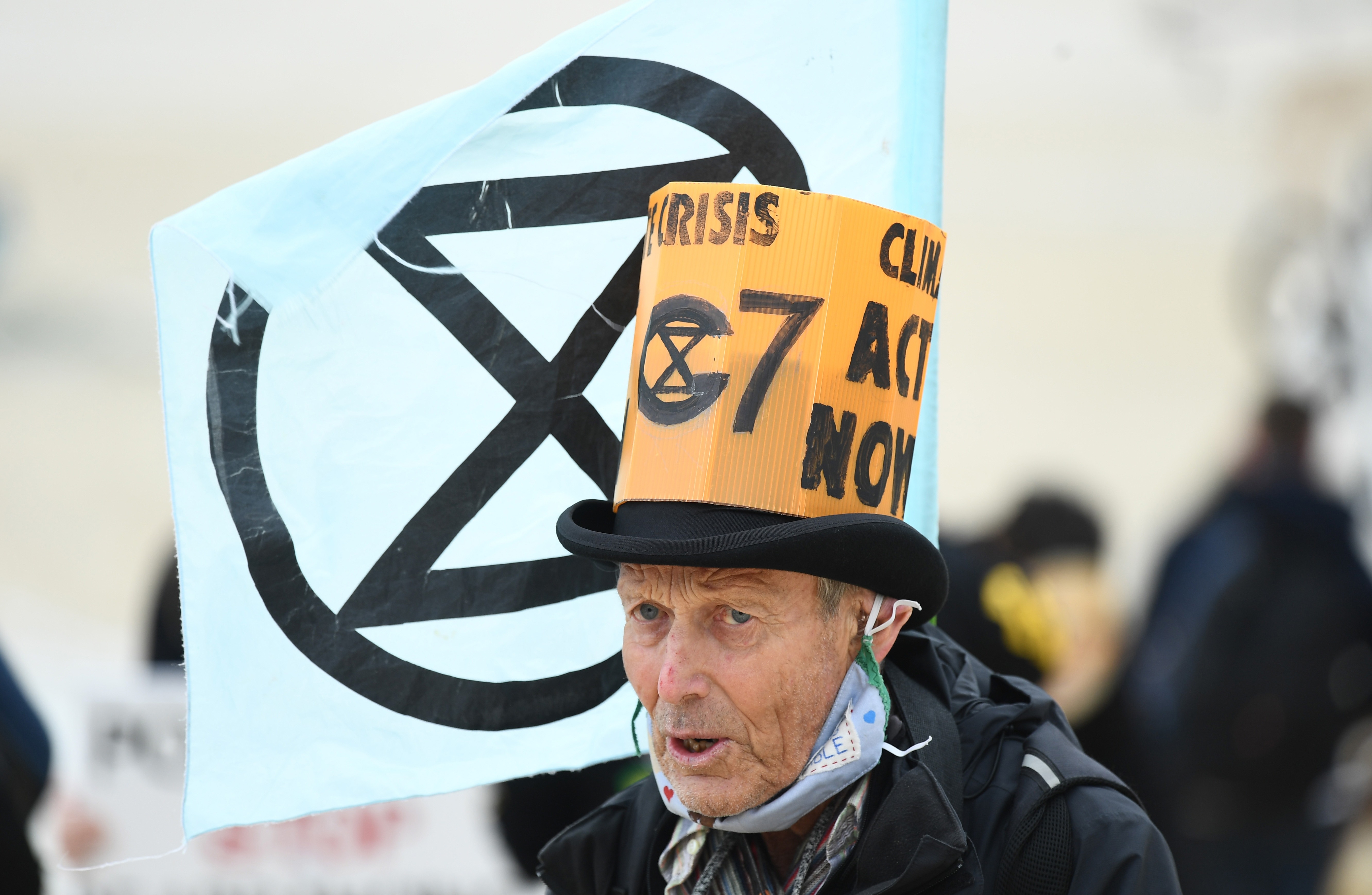 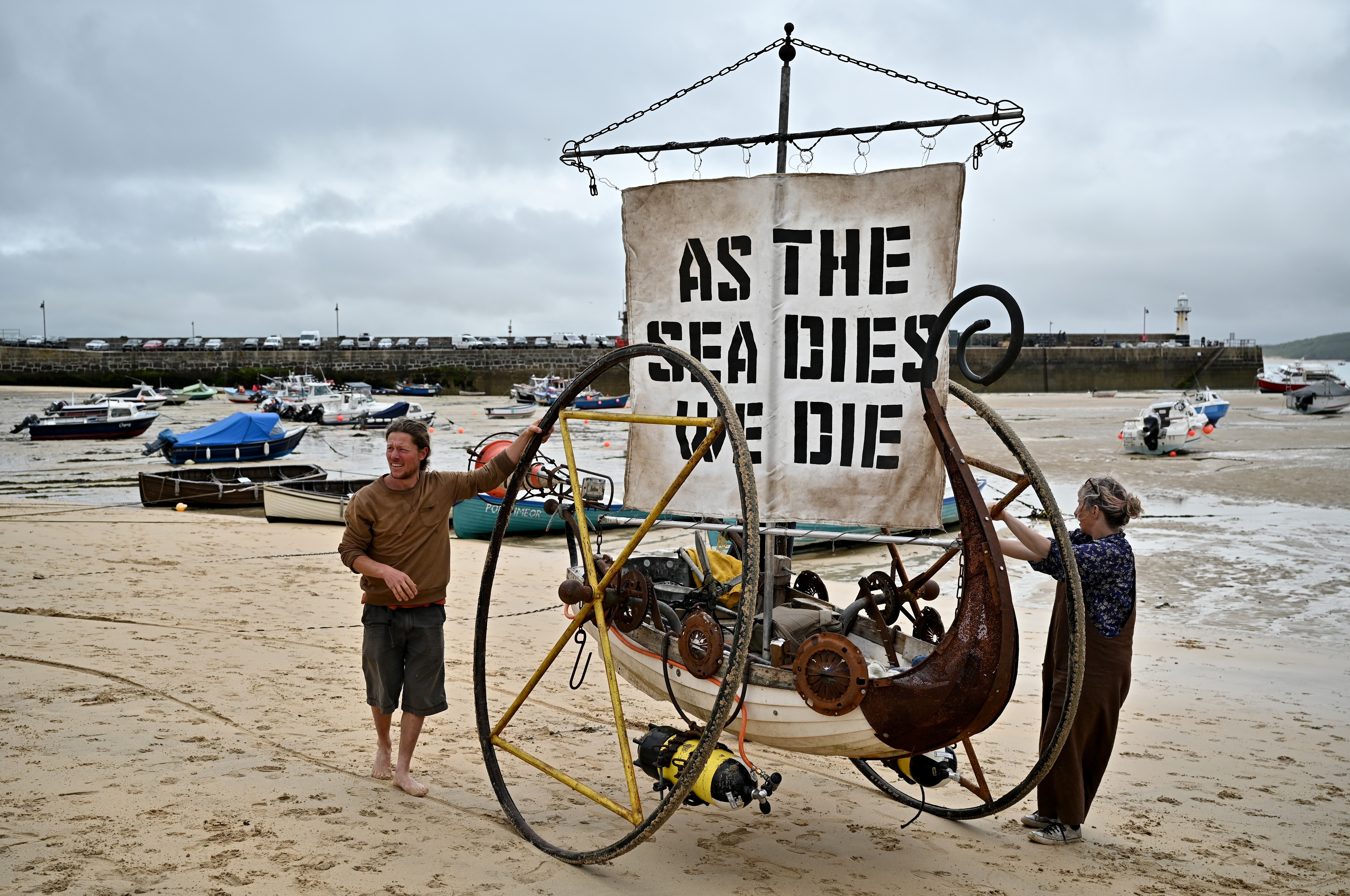 Ms Baldwin added she was more worried about the state of the planet than any competition she has undertaken as an Olympian.

She said: "I'm part of Ocean Rebellion because I'm an Olympic sailor and the ocean is where my heart is. I love the water and respect it."

Extinction Rebellion will also hold protests in Falmouth on Saturday, where they will march through the town again, while on Sunday there will be an art installation in St Ives.

The environmental group has managed to grab the headlines in the past with colourful and often wacky demonstrations such as gluing themselves to roads and tubes to disrupt transport.

However many of their protests have been highly controversial with many complaining about their methods of demonstrating.

In September last year the group blockaded newspaper print works across the country, disrupting the distribution of national newspapers.

The action brought condemnation from the Home Secretary Priti Patel who dubbed their activities as “guerrilla tactics” and added those involved should “face the full force of the law”.

Leaders of the G7 countries have gathered in Cornwall for talks where they are expected to discuss a number of issues including a global response to the coronavirus, environmental concerns and economic strategy, amongst others.