The average price of a litre of petrol at UK forecourts on Monday was 146.89p, according to Government statistics, while a litre of diesel was 150.73p.

Record highs set in April 2012 were exceeded last month and prices have continued to increase since then.

The average cost of petrol and diesel has increased by around 34p per litre in the past 12 months.

This has made it approximately £19 more expensive to fill a typical 55-litre family car. 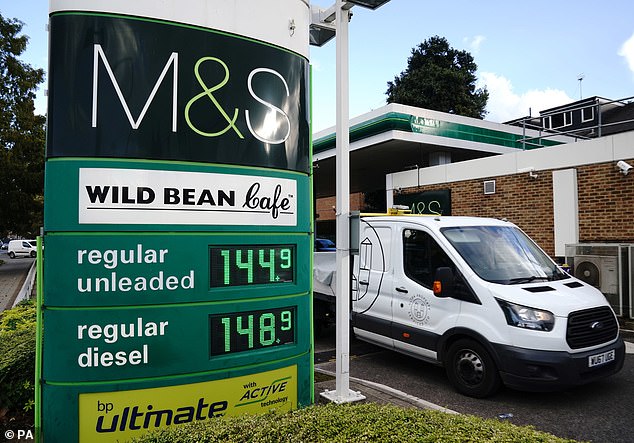 The average price of a litre of petrol at UK forecourts on Monday was 146.89p, according to Government statistics, while a litre of diesel was 150.73p 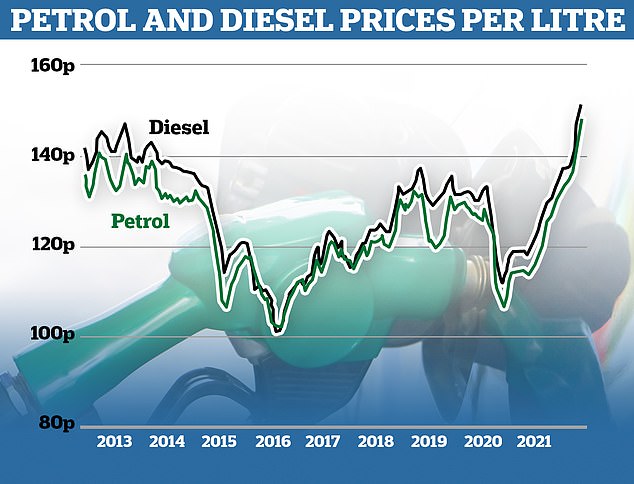 Prices of petrol and diesel are both higher than the previous records set in April 2012. The new records were set last month and have continued rising since 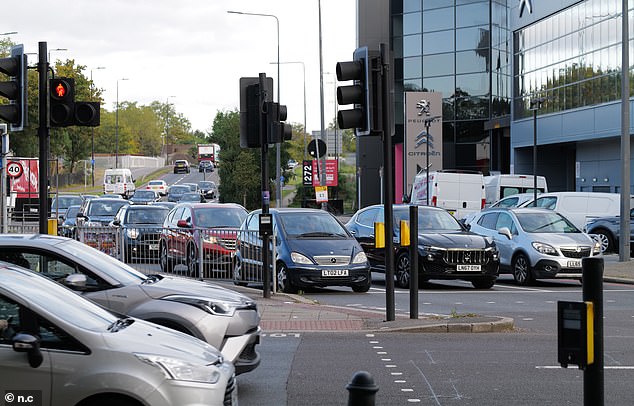 The average cost of petrol and diesel has increased by around 34p per litre in the past 12 months. This has made it approximately £19 more expensive to fill a typical 55-litre family car

The rise in fuel prices has been driven by the cost of oil doubling over the last year.

RAC data at the time showed the price of unleaded had rocketed by 28p a litre in a year from 114.5p in October 2020, adding £15 to the cost of filling up a family car.

The motoring company called it a ‘truly dark day for drivers’, which coincided with the expansion of London’s Ultra Low Emission Zone (ULEZ) which left another 130,000 drivers facing £12.50 a day charge.

The motoring group previously said fuel price rises are mainly due to the rapidly increasing cost of oil, which has gone from $40 a barrel a year ago to $85 now.

But it said the introduction of E10, a new petrol blend which contains less carbon, has also had an impact.

Simon Williams, an RAC spokesman, said: ‘This is truly a dark day for drivers, and one which we hoped we wouldn’t see again after the high prices of April 2012.

‘This will hurt many household budgets and no doubt have knock-on implications for the wider economy.

‘The big question now is: where will it stop and what price will petrol hit? If oil gets to $100 a barrel, we could very easily see the average price climb to 150p a litre.’

The margin retailers are taking on every litre sold is also greater than it was prior to the start of the pandemic, putting further upward pressure on prices.

Last month, RAC fuel spokesman Simon Williams added: ‘Even though many people aren’t driving as much as they have in the past due to the pandemic, drivers tell us they are just as reliant on their cars, and many simply don’t have a choice but to drive.

‘Those on lower incomes who have to drive to work will seriously struggle to find the extra money for the petrol they so badly need.

‘We urge the Government to help ease the burden at the pumps by temporarily reducing VAT, and for the biggest retailers to bring the amount they make on every litre of petrol back down to the level it was prior to the pandemic.’

Luke Bosdet, the AA’s fuel price spokesman, said: ‘Whether it’s down to oil producers, market speculators, Treasury taxes or struggling retailers trying to balance their margins, record pump prices must be saying to drivers with the means that it is time to make the switch to electric.

‘As for poorer motorists, many of them now facing daily charges to drive in cities, there is no escape. It’s a return to cutting back on other consumer spending, perhaps even heating or food, to keep the car that gets them to work on the road.’

Small business owners previously said the price rises were pushing their firms ‘to the brink’.

Small businesses: Fuel price rises are ‘pushing us to the brink’

Small business owners today said the price rises were pushing their firms ‘to the brink’.

Drew Robinson, founder at JToB Apothecary, said: ‘As a small business with tight margins, every cost hike wherever it is has a significant impact.

‘As I sell at farmers markets, which I have to drive to, I’m seeing my income dwindle away and I’m powerless to do anything about it. These petrol price increases are taking my business to the brink.’

Dominik Lipnicki, Director at Your Mortgage Decisions Ltd, said: ‘This is yet another kick in the teeth for people already struggling with a hike in energy prices and inflation as a whole.

‘The fear for homeowners now is that this puts further pressure on the Bank of England to increase the base rate.’

Meanwhile, Jez Lamb, founder at [email protected], said rising cost of fuel would leave business owners having to decide whether to pass cost increases onto customers.

‘Another day, another challenge for the average small business owner, especially those whose jobs involve transport, delivery and drop-offs,’ he said.

‘This is yet more price hikes that we have to swallow among all our other rising costs.

‘We’ll undoubtedly see couriers increase their prices under the banner of a ”fuel surcharge”, but do we pass this onto our own customers who are already being hit with prices rising elsewhere? It’s yet another headache and challenge to overcome.’