Police and a gang of bikies fought a running battle in Strathmore yesterday after the bikies attacked two policemen.

The bikies scattered after the two policemen radioed for help. 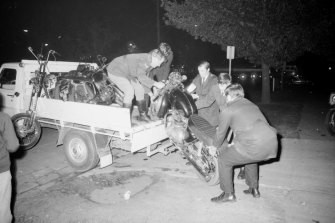 Police with confiscated motorcycles after a running battle with bikies.Credit:The Age Archives

Twelve police cars converged on Willonga Street to answer the call. They chased the bikies and caught four after setting up road blocks.

Police had been called earlier to remove the bikies from a Sunbury property.

Late last night police had charged 12 people – two of them young women – with offences including assault, assaulting police, assault by kicking, resisting arrest, and indecent language. One youth was charged with possessing a “flick knife”.

They also took possession of six motor cycles found at the house in Willonga Street.

Early today several police were combing the Strathmore, Essendon, Tottenham and surrounding areas for the bikies.

Mr G. Gatos, a milk bar owner, said last night he called police after a youth refused to pay for a bread roll and a can of drink.

“We went to the house next door, and found 30 youths having a drinking party,” Snr Constable Williamson said.

“The trouble started when we made an arrest inside the house.

“Several youths grabbed us and punched and kicked us to the ground. Eventually we managed to reach our car and radio for help.”

Police stepped up their campaign against bashings in the western suburbs last night.