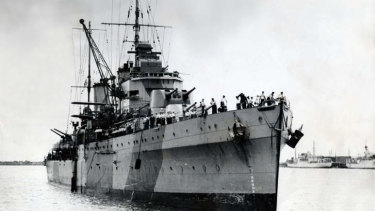 It is believed that H.M.A.S. Sydney has been lost in an action in which an enemy raider was sunk.

"Extensive search by air and surface units to locate survivors continues," the Prime Minister said. "The next of kin of men on board, to whom the Government and the Naval Board have extended deepest sympathy, were informed last Wednesday."

The Prime Minister added that although the action took place some days ago, an announcement to the public had not been made earlier for three reasons. For strategical reasons, including the safety of other ships, it was thought desirable not to publish the Information earlier than now. There was also the remote, yet not impossible, eventuality of the Sydney still being afloat, and also a hope that a version could he obtained from one of her personnel. Time was taken in the desirable direction of informing the next of kin.

Mr Curtin said that the Government and the Naval Board had kept the press informed of developments as information was received, and were sensible of the cooperation of the press in withholding publication. 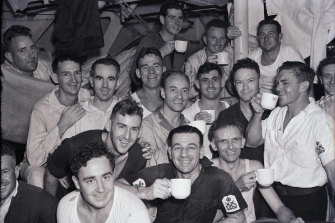 Members of the crew of the HMAS Sydney, upon their arrival at Circular Quay in Sydney. February 10, 1941.Credit:Frederick John Halmarick

"While regretting the loss of a fine ship and her gallant compliment," Mr Curtin said, "the people of Australia will be proud that the Sydney had upheld the traditions of the Royal Australian Navy and had completed a glorious career in successful action against the enemy."

H M.A.S. Sydney began her brief but brilliant career with the Empire navies in 1935. Originally begun as H.M.S. Phaeton, under the Imperial Government's 1932 construction programme, she was acquired by the Commonwealth Government in 1935.

After non-spectacular but very useful pre-war service with the British Navy, the Sydney, in the middle of 1938, came home to Australia for the first time, reaching Fremantle on August 2, Melbourne on August 8, and Sydney on August 11.

August, 1939, with war clouds gathering fast, found the Australian cruisers Canberra and Sydney on a cruise to the Dutch East Indies and Singapore. The following month came the outbreak of war, and the Sydney was soon once more bound for the Mediterranean for service with the Imperial fleets, but this time on actual war duty

It was In July of last year, almost four years since her first arrival lit Australia, that Australian’s thrilled with pride at the Sydney's Mediterranean victory, in the first straight-out cruiser duel of the war, resulting in the sinking of the Italian cruiser Bartolomeo Colleoni. The communique of the Commander In Chief of the Mediterranean fleet concerning that battle described how the Sydney and some destroyers made contact with enemy craft, which altered course in an endeavour to escape. "Our forces," stated the communique, made a determined attack, and accurate fire from H.M.A.S. Sydney caused vital hits on Bartolomeo Colleoni which reduced speed, enabling destroyers to complete her destruction. A second cruiser Giovanni Delle Bande Nere was chased, and hits were observed, but her superior speed saved her from a similar fate. Our forces rescued 545 men from the sunken Italian cruiser, including her captain. Our ships were bombed by the Italian air force while carrying out this humane work. There were no casualties on our ships."

Shortly before this notable victory the Sydney had taken part in the battle of Calabria, and in the opinion of several members of the crew, when interviewed after Sydney's triumphal return home early this year, her performance in this battle was more exciting in certain respects than the sinking of the Bartolomeo Colleoni. The Sydney was then one of it squadron of five light cruisers supported by the battleship Warspite. They engaged a section of the enemy force consisting of three battleships, ten cruisers and destroyers. The Sydney and her fellow cruisers kept up a fierce and accurate fire, until the Italians broke off the battle and made off on the arrival of British reinforcements, including the battleship Malaya and aircraft carrier.

When the Sydney sank the Italian destroyer Espero, off Zante, in June 1940, nearly 50 Italian survivors were brought on board. Members of the Sydney's complement described the Espero as sinking at night like a flaming torch.

It was In February last that the Sydney came home for the second time after her splendid record of active service. Captain J. A. Collins and the ship's company were accorded a tremendous reception from the public in Sydney. A few days later Victorian members of the crew came on to Melbourne. She remained on the Australian station, and on May 15 Captain J. Burnett assumed command from Captain Collins.

During her absence from Australia she had steamed nearly 80,000 miles; she had been in action a score of times against other surface craft, shore batteries and submarines. In addition she had withstood 60 heavy bombing attacks from the air while at sea. For her part she had fired over 4000 shells in her various engagements, which she had carried out with distinction, but without loss of an hour's fighting efficiency.

An active and vital part of the Sydney's equipment was her amphibian aircraft. An Air Force statement issued on the Sydney's return home last February showed that for a year an R.A.A.F. Seagull amphibian had been attached to the cruiser.

Among this Seagull's adventures was an occasion, during the bombardment of Bardia, in which the Sydney played a big part in June, 1940, when the aircraft was attacked at 9000 feet by three Italian biplanes. The first plane shot away the Australian machine's aileron control, and the second riddled the rudder end after part of the hull, and shot away most of the tail plane struts. The amphibian's rear gunner went into action and drove the three fighters off, but it took a distance of 7000 feet for the amphibian's crew to gain control of their aircraft They headed for Sollum for a forced landing, but estimated on arrival that the country would be too rough, so the damaged machine flew another 120 miles to Mersa Matruh aerodrome where, on a bomb-damaged surface, the amphibian's port wheel collapsed.

At the bombardment of a fighter aerodrome at Scarpanto (Dodecanese Islands), the amphibian warned the Sydney of the presence of five Italian E-boats, two of which were sunk, and a third damaged.

In November, 1940, H.M.A.S. Sydney took a conspicuous part in a night attack in the Adriatic on Italian convoyed ships and destroyer escort. The convoy was destroyed, and the escort dispersed. Sydney also took part in the transport of the first Allied troops to Greece.

During the Sydney's bombardment of another aerodrome, the Seagull reported E-boats by radio; "spotted" for the cruiser in a haze that was so dense that the Sydney could not have known with certainty how accurately she was firing but for the Seagull's reports on the fall of the shots. Throughout the year the Sydney's Seagull carried out spotting and anti-submarine patrols. On two occasions the Seagull was damaged by bombs, the first by splinters from a bomb aimed at the Sydney, the second when the amphibian wan ashore at an aerodrome that was attacked by Italian aircraft.

The aircraft on the Sydney, at the time of her first and peacetime visit, to Australia, took part in a gesture which incidentally demonstrated the awful mobility of a cruiser’s land and water aircraft. When the Sydney was passing Kangaroo Island the aircraft was lowered over the side instead of being catapulted. Taking off from the water it flew over Victoria, alighted on land at Nhill for refuelling, and then flew to Point Cook. The Seagull then rejoined the Sydney the next evening before she left Melbourne for Sydney. On the occasion of the Sydney's triumphant return home last February, the R A.A.F. amphibian left the cruiser at Adelaide, flew to Point Cook, and on to Sydney, where it rejoined the Sydney.