ENCOURAGING your children to eat more fruit and veg is something we're told to do to make sure they're healthy.

But experts warn that some foods considered good for your kids could actually pose a serious choke risk. 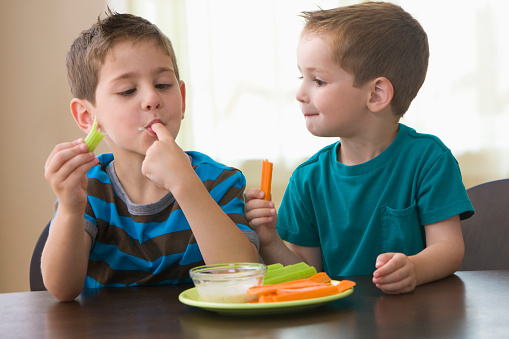 An analysis of recent government data by first aid specialists CE Safety found that in the past four years, 1,571 deaths were caused by choking on food or small objects.

Of those deaths, 14 were children under the age of five – while around 40 kids are rushed to hospital every day after swallowing something dangerous.

Children can be at a higher risk because their windpipes haven't properly developed yet or they haven't mastered chewing or swallowing techniques.

In fact, for young kids their windpipe is approximately the size of a drinking straw in diameter.

So anything larger than this could an get easily stuck and have potentially devastating consequences.

To help parents, health and safety trainer at CE Safety, Gary Ellis, has put together a list of 12 of the most high-risk foods for kids…

It's something we give to our kids a lot – especially in sandwiches – but it is potentially one of the lesser known choking hazards.

Try lightly toasting bread and giving it to them in very small pieces instead.

Also cut foods like pancakes and muffins into small cubes too – and make sure they've got a drink.

Round and hard foods can be extremely dangerous for young children.

"Pieces of raw carrot, celery and broccoli can be easily lodged in the back of their throat, blocking airways," says Gary.

You could always try shredding carrots for kids under two or simply steam them to be on the safe side.

Hard and crunchy foods such as popcorn can easily get stuck in your child's throat.

Gary says: "Even toddler's with fairly competent eating habits shouldn't be given this food.

"Unpopped corn kernels are incredibly hard and can easily become lodged in airways.

"Its texture is a danger as other food products can stick to the popcorn and create a larger block of the airway which could be fatal."

Rice cakes can be a better option for older toddlers who enjoy crunchy foods.

What to do if your baby is choking

Babies explore the world around them by putting things in their mouths.

This means they're at high risk of choking.

When your baby is really young even curdled milk can pose a threat.

But as they grow up and start to move around, everyday items like sweets, grapes and nuts can prove common hazards.

The first thing to note is a baby who's choking won't be able to cry, cough or make any noise, as they struggle to breathe.

What should you do?

Step 1. Give your baby five back blows

Hold your baby face down, resting them along your thigh with their head lower than their bottom.

Hit them firmly on their back between the shoulder blades up to five times.

If back blows don't dislodge the object, move on to step two.

Step 2. Give up to five chest thrusts

Turn your baby over so they are facing upwards and place two fingers in the middle of their chest just below the nipples.

Step 3. Call 999 if the object does not dislodge

Continue with cycles of back blows and chest thrusts until the blockage clears or help arrives.

Any sort of hard sweet is a hazard and there's a high chance it will become trapped in your child's airway.

"Children struggle to break down any food that doesn't dissolve quickly and so anything of this texture should be avoided," Gary says.

"Hard sweets even more so as they do not melt or dissolve when lodged."

This is one depends more on the age of the child, but can be the case for those under two.

Gary says: "Foods with coarse textures can be extremely dangerous to young children, particularly dry foods that can't be easily broken down.

"Crackers and rice cakes have hard edges that can also scratch and damage the inside of your child's throat."

Nuts and seeds are small and can be hard to chew or have sharp edges – posing a threat to kids.

"If children still haven't had their molars through, their ability to grind down food can be completely impaired," says Gary.

"Any small, hard foods such as nuts and seeds should be avoided at all costs.

"Even a spoonful of peanut butter can be enough to block a child's windpipe due to their inability to chew hard foods."

You could try thinning nut butters with a little water if your child enjoys eating it from the spoon.

Cheese could be another potential choking risk to young kids.

"Even if the pieces have been cut into small chunks, they still pose a hazard," Gary says.

"Due to its hard texture, cheese can easily become wedged in the back of a child's throat causing their airway to become blocked."

Try grated or crumbled cheese instead.

Doctors' have issued stark warnings about grapes after a number of unfortunate choking deaths in the last few years.

While in theory, the texture of grapes may seem harmless, they are incredibly dangerous and pose a risk if children swallow whole.

The size and shape of grapes means that they can completely plug children’s airways, with the tight seal produced by fruit’s smooth, flexible surface making them tricky to shift with first aid manoeuvres.

Experts advise halving or quartering grapes, and similar foods such as cherry tomatoes.

"The sticky texture and frequent chewing motion of gum means children can often get it stuck in the back of their throat," says Gary.

"Some children may be tempted to swallow, which leads to the gum blocking their windpipe."

So, it's best to keep them away from this one where possible.

It's not one you probably want to be giving your kids on a healthy diet any way, but marshmallows really should be avoided.

Gary says: "Although soft in texture, marshmallows can often glob together and expand in the throat causing a high choking risk.

"If left unsupervised for a matter of seconds, children can also be tempted to put the whole thing in their mouth, blocking their airways entirely."

Apples, particularly the apple skin pose a huge risk to children as they can easily become stuck in the back of their throat and the skin is airtight.

Choose softer varieties, like Gala apples, and slice them thinly.

Gary adds: "It’s definitely worth avoiding any fruit with seeds such as watermelons, oranges and cherries."

Bones are incredibly harmful to children if they become wedged, but unfortunately they can be hidden in boneless meats.

Always check thoroughly before giving any meat to your child.