Dramatic bodycam footage shows the moment armed police chased a fraudster across rooftops before arresting him for tricking elderly victims from the Cotswolds out of thousands of pounds.

Officers from Gloucestershire Constabulary executed a warrant and raided a property on Theberton Street in Islington, north London, after believing it was linked to the gang of swindlers.

The four men were found to have stolen £290,000 from at least 60 victims across the country – after one victim from Cirencester triggered a police investigation.

In the clip, armed officers rush through the property screaming ‘police’ as they frantically searched for the suspect – who had quickly rushed out of an open window upstairs.

After checking the home, one officer shouts ‘out the back’ as they hastily turn their attention to the garden and file out one-by-one, pursuing the scammer. 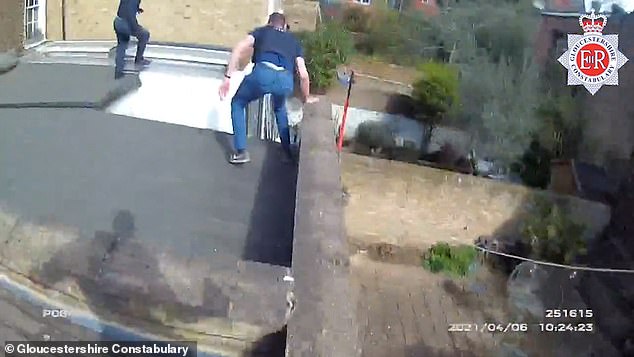 After raiding a property on Theberton Street in Islington, north London, police chased the fleeing scammer over rooftops and down into people’s gardens 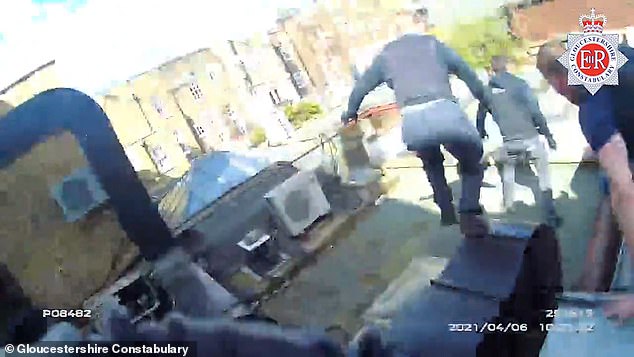 The men – who the police had been investigating – have all since been jailed for conspiring to commit fraud by false representation after conning nearly £300,000 from at least 60 victims across the UK

Dramatic footage from the raid on April 6 last year shows the police storming on to a roof before they start the manic chase for the fleeing suspect.

At one point, the officers’ composure is put to the test as they scale a narrow bricked byway high above the ground while they attempt to keep up and catch the crook.

Bodycam clips show officers desperately jumping from rooftop to rooftop – then down into locals’ gardens – before scaling back up again, while those further back shout directions at police towards the front of the chase.

The policeman, whose uniform is recording the sensational manhunt, shouts to his colleagues as they climb down a drain: ‘He’s still going. He’s on your right, he’s on your right. Right again.’

Before long, they dash across another resident’s patio before ascending over a garden wall and climbing across what appears to be hoisted-up metal scaffolding.

Following the officers at the front, they turn into an narrow alleyway – where the suspect has finally been stopped in his tracks.

The police zigzag through the passageway and pile on to the scammer, shouting: ‘Get down, get down.’

Despite sending the police on a Mission Impossible-like hunt across multiple rooftops, the suspect can be heard saying ‘I’m not resisting,’ before stating his name.

The panting officer then arrests him – leading to the detention of three other members of the scamming gang.

The four men have all since been jailed for conspiring to commit fraud by false representation after conning nearly £300,000 from at least 60 victims across the UK.

They were convicted of scamming and conning elderly and vulnerable victims out of hundreds of thousands of pounds.

The gang would phone up victims across the country and would targeting a particular region, before moving on to the next in a bid to fraud members of the public. 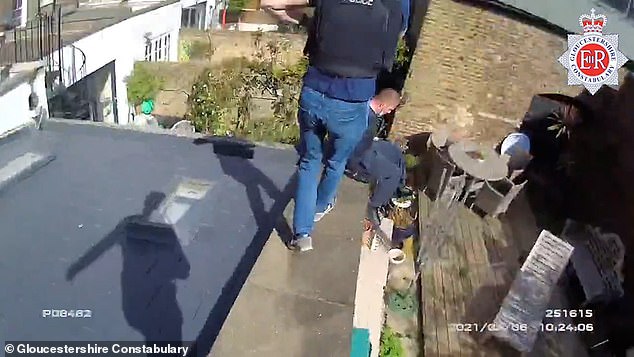 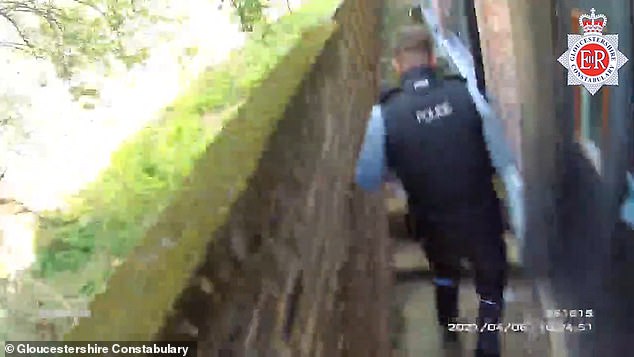 Following the officers at the front, they turn into an narrow alleyway – where the suspect has finally been stopped in his tracks

In the twisted scam, they pretended to be the police and told the vulnerable victims that they had been scammed after noticing counterfeit currency being transferred into their account.

They then encouraged the victims to immediately remove money from their accounts and hand it over to a ‘courier’ who they believed was sent by ‘the police’.

Most of the victims were over the age of 75, with two aged 99 – and many were unable to retrieve the money they were conned out of.

The four men had pleaded guilty at an earlier hearing to conspiring to commit fraud by false representation. Rahman, Maarjan and Islam had also admitted possessing criminal property.

Sentencing the men, Judge Michael Cullum told them: ‘Each of you were fully aware of the scale of the operation you were involved in and you were additionally aware of the basis of the fraud, which was to prey on the trust of the elderly. 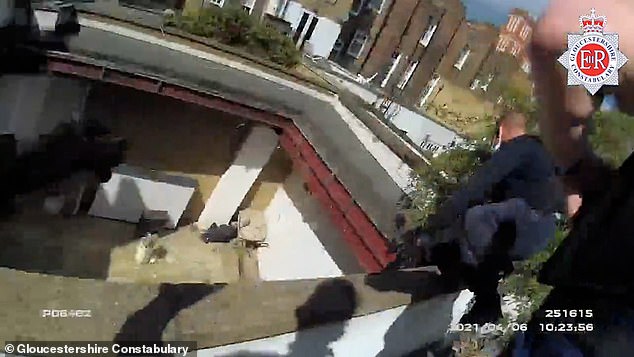 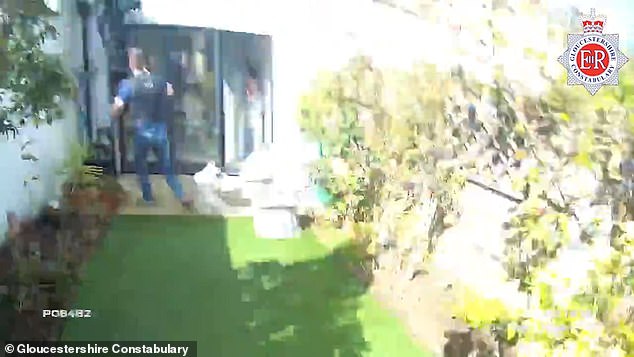 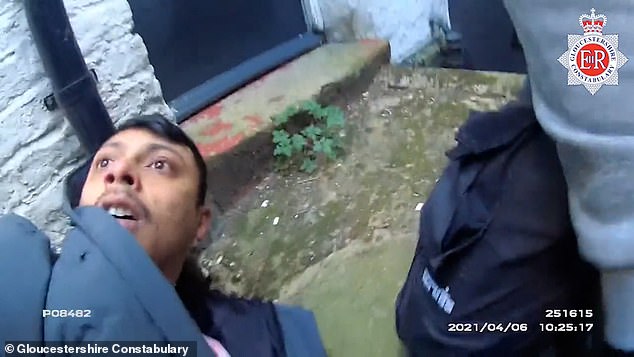 After the mad chase, officers finally pinned the scammer down as he told them ‘I’m not retaliating’

‘The fraud depended upon recognising and exploiting the frailty of the elderly.

‘You took from these elderly victims so much more than money. They were told if they did not comply, they would lose their life savings, which is exactly what did happen.

‘At least half of them have failed to be reimbursed by the banks, because they told lies at your behest. These were your lies. 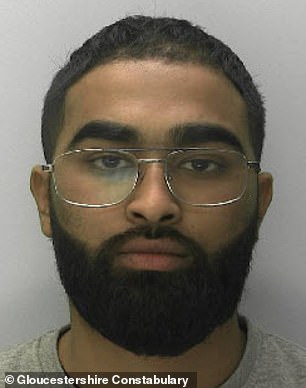 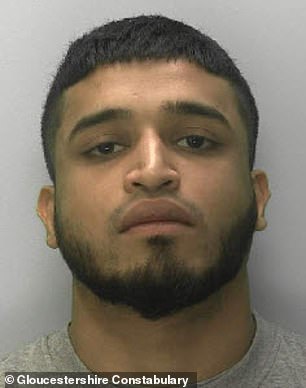 ‘These victims were intelligent, retired professionals who would naturally wish to assist the authorities.

‘They were severely embarrassed and distressed by the loss of their savings, saying that they felt stupid. They are not. They were conned.

‘I have no doubt that the effect on them has been to irretrievably change the way they look at life and society. It is bound to affect them for the rest of their days.’

‘It was the result of a lot of immense hard work from many officers at Gloucestershire Constabulary, who went above and beyond to ensure that we could show just how low these men were willing to stoop in order to defraud the vulnerable and elderly. 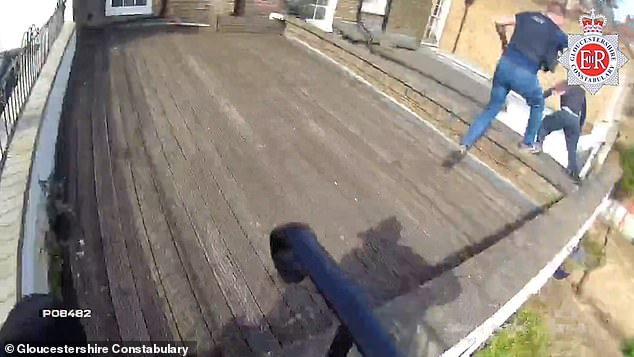 Officers were forced to scale the properties in Islington, north London, to catch the crook 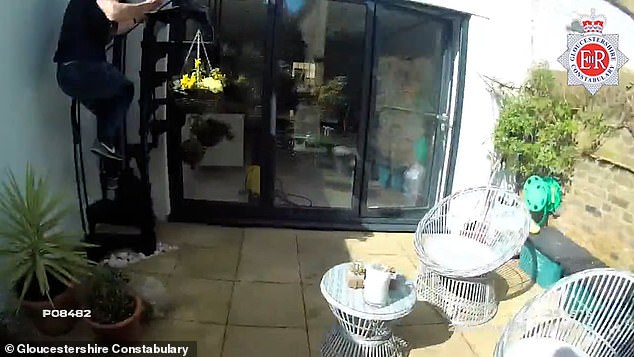 ‘I want any gangs who try to target the people in our communities to know that we will not sit back but will actively pursue them for their crimes, not just in Gloucestershire but anywhere in the country.

‘Following their arrest last year, no courier fraud was recorded at all for a period of months in Gloucestershire, and significant reductions were seen across other parts of the country, which shows that our message is getting through. We will not stop until we bring you to justice.

‘I would like to thank not just the officers involved in this case, but the victims and their families who have bravely come forward. These men were sophisticated con artists and were able to pull the wool over many intelligent people’s eyes before being stopped.

‘This has had a huge impact on many victims who have not only seen a huge financial loss, but have been left with psychological damage resulting in some being too scared to answer the phone or even leave their house.

‘I hope that this sentence will bring some peace to the men and women they targeted.’

Kevin Hansford from the CPS, said: ‘The fraudsters presented themselves in a convincing way to victims, securing the trust of hundreds of elderly people through their falsehoods. The sole purpose of the criminals was to enrich themselves, at the expense of vulnerable people who badly needed their hard-earned savings and pension income.

‘I would like to thank the many victims who supported this prosecution and the hard-working Gloucestershire and Hertfordshire Police who enabled us to prove the case against this gang’s callous criminal enterprise.’ 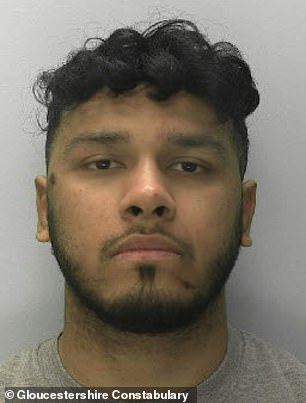 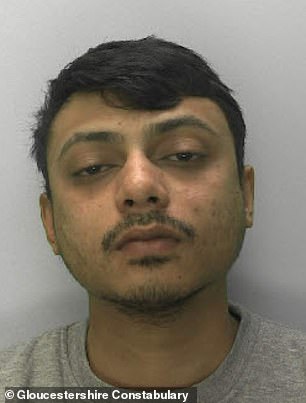