Four bodies have been discovered after ‘the most destructive’ blaze in Cyprus’s history took hold over the weekend.

Volunteers found the remains just outside the village of Odou on the southern edge of the Troodos mountain following the blaze which has so far scorched more than 50 square kilometres of forest.

The fire began on Saturday afternoon amid a heatwave and has forced the evacuation of at least eight mountain side villages. 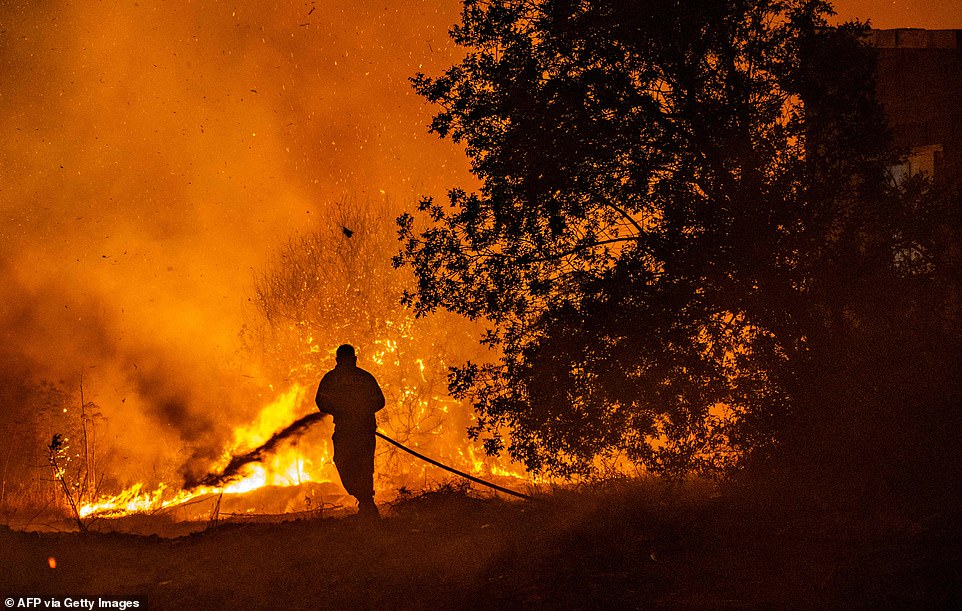 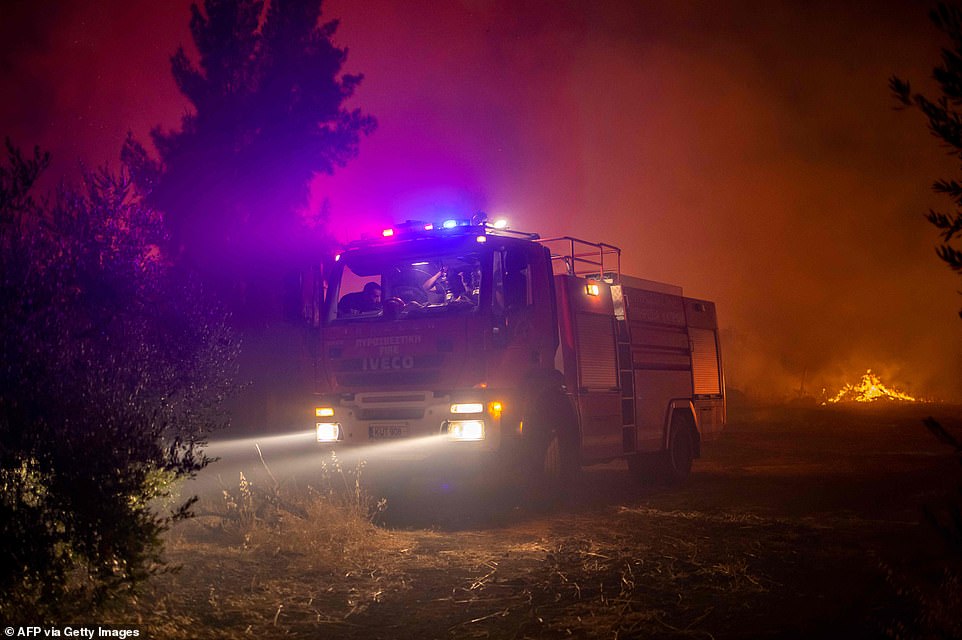 Crews have been working throughout the night to put out the blaze, which began on Saturday afternoon

Authorities are working to confirm if the bodies, which were discovered near a burnt out car, belong to four Egyptian men who were reported missing.

‘We are experiencing the most destructive fire since the founding of the Cyprus republic in both material damage, but also unfortunately in terms of human lives,’ Interior Minister Nicos Nouris said.

‘All the indications support the fact that these are the four missing persons we have been searching for since yesterday.’

Mr Nouris said he has informed the Egyptian ambassador to Cyprus and arrangements will be made to repatriate the remains. 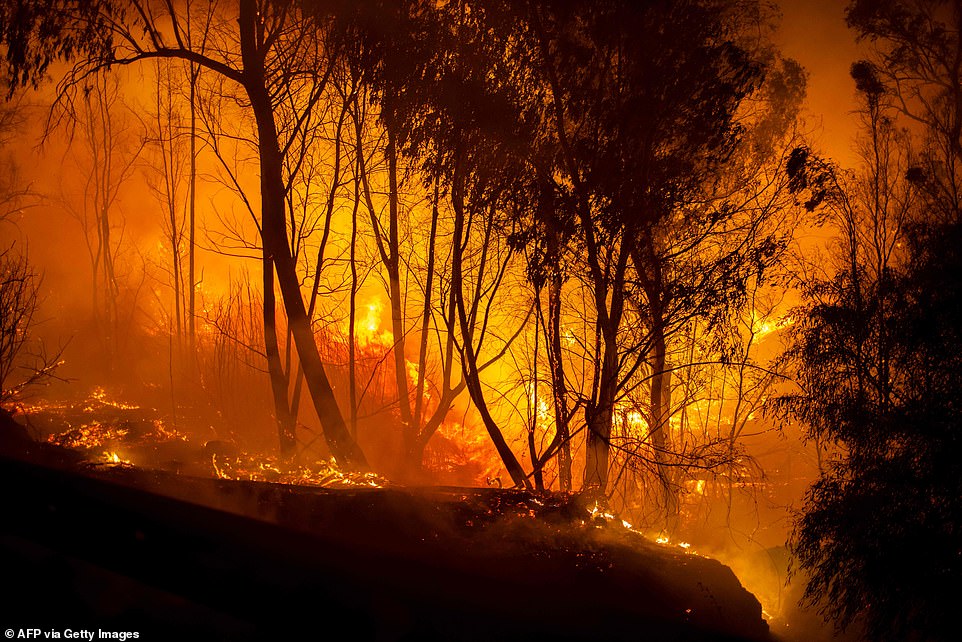 The huge blaze has left four people dead, destroyed homes and forced the evacuations of nearby villages in the area 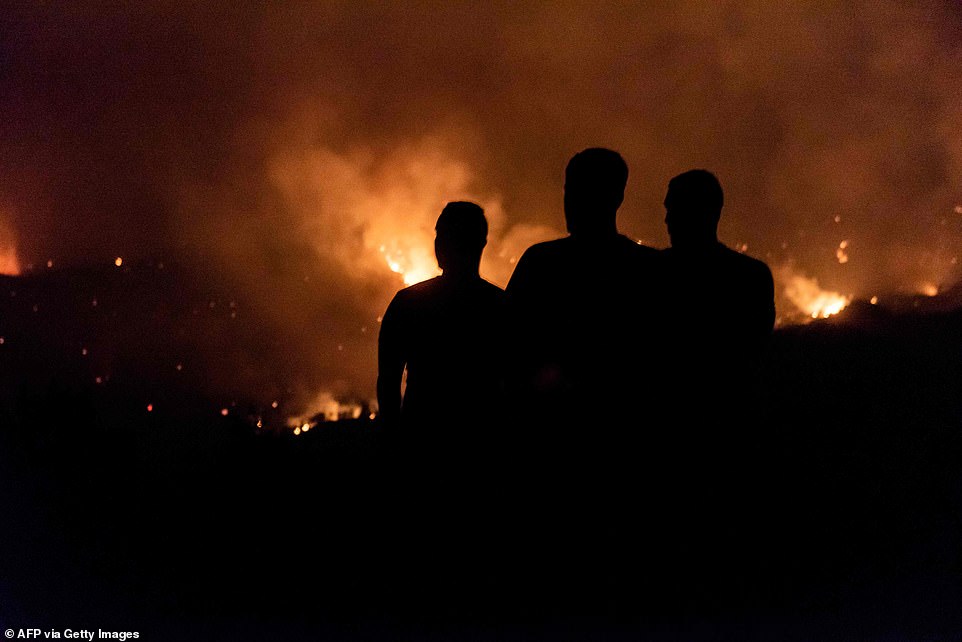 People in the village of Vavatsina in the Larnaca district of Cyrus, watch as a giant wildfire rages on 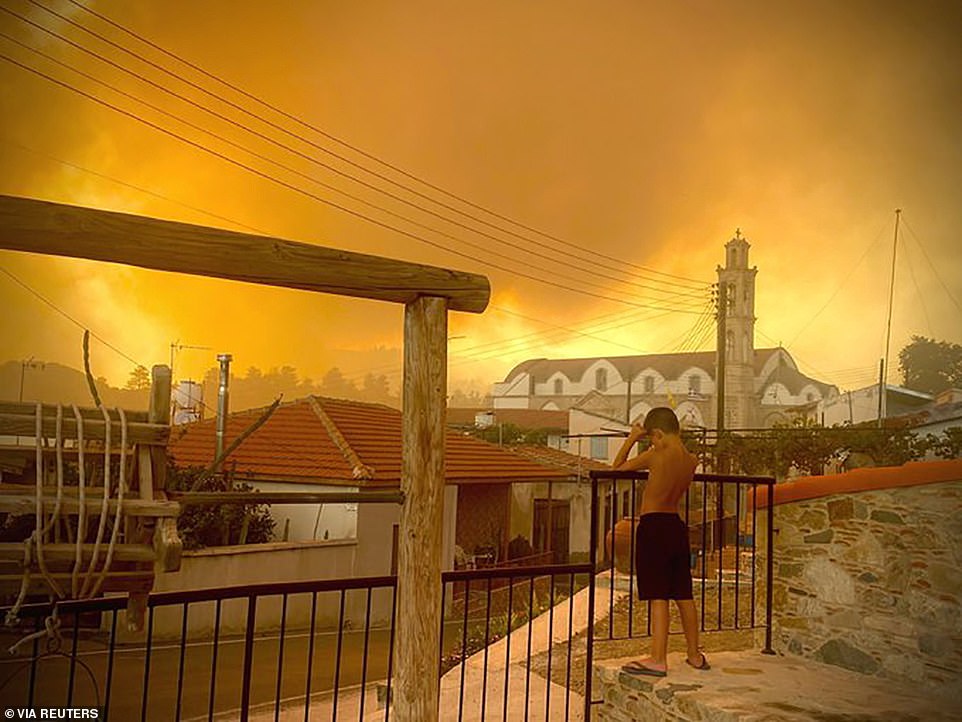 Smoke from the forest fire billowed far and wide. This picture captures the smoke travelling over Ora Village, Larnaca 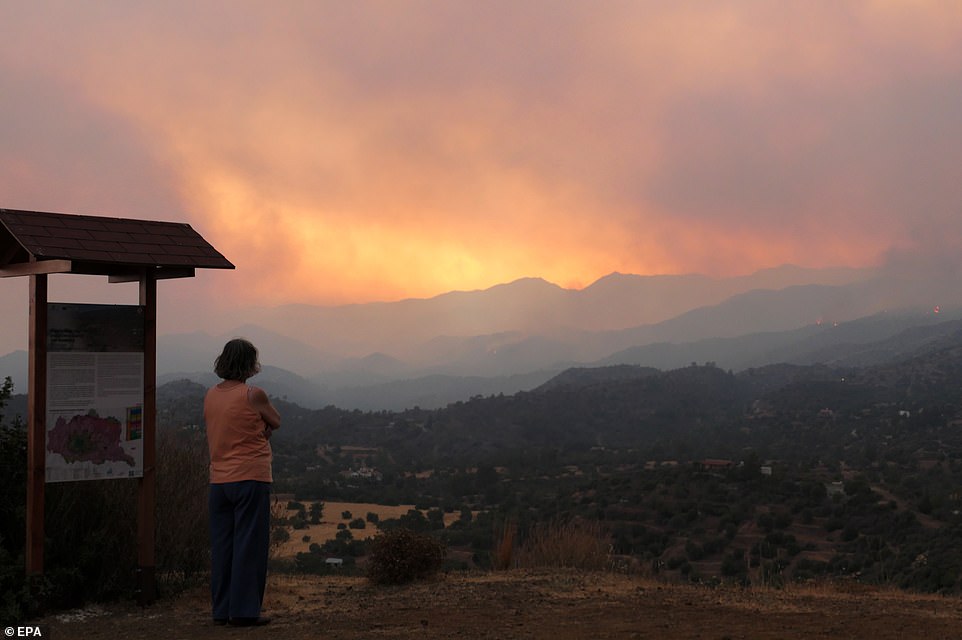 The country’s entire fire department has been mobilised, with off-duty staff being called back into service to help

The country’s entire fire department has been mobilised, with off-duty staff being called back into service, but the Cypriot government has still been forced to request firefighting aircraft from other European Union member countries and Israel.

So far, 70 fire engines, seven bulldozers and 10 water tankers have been called to the scene.

Two Greek Canadair CL-415 aircraft were dispatched to the island but had to turn back due to a technical malfunction. Another aircraft being sent to replace the faulty plane is currently being refuelled in Rhodes. 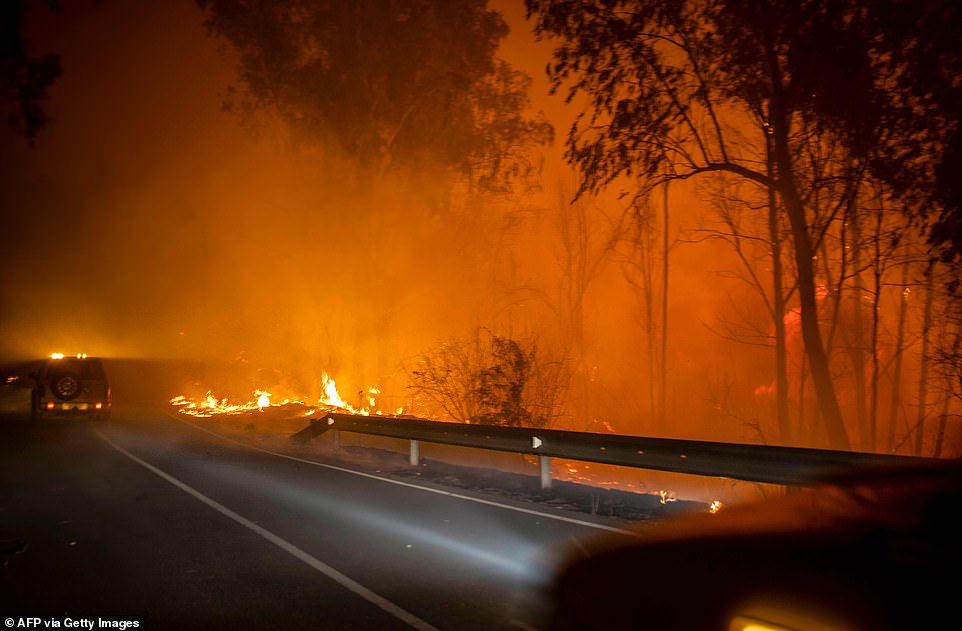 The fire has spread to the slopes of the Throodos mountain chain, leading to the evacuation of at least eight villages nearby 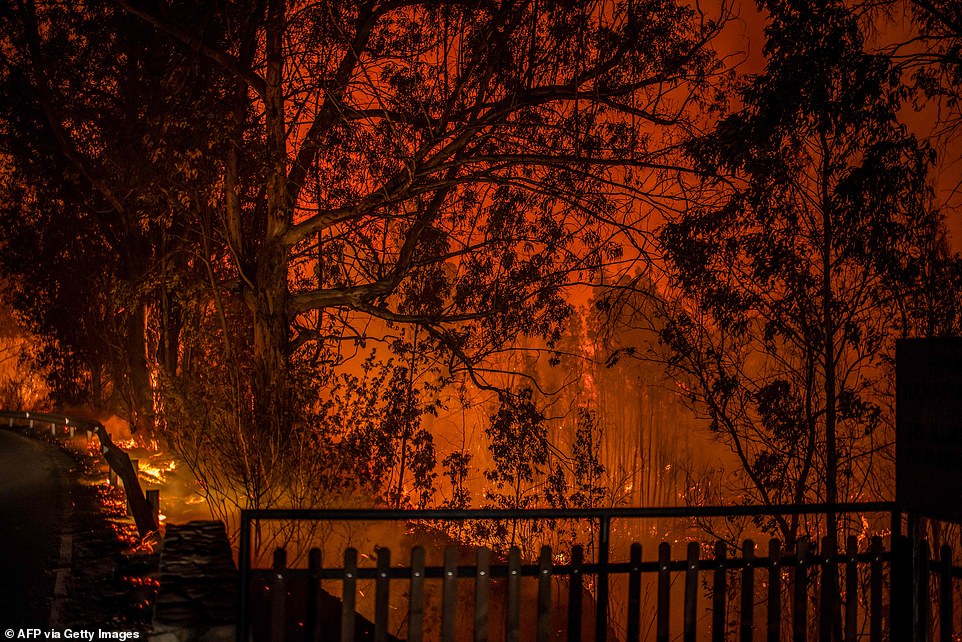 So far, 70 fire engines, seven bulldozers and 10 water tankers have been called to the scene 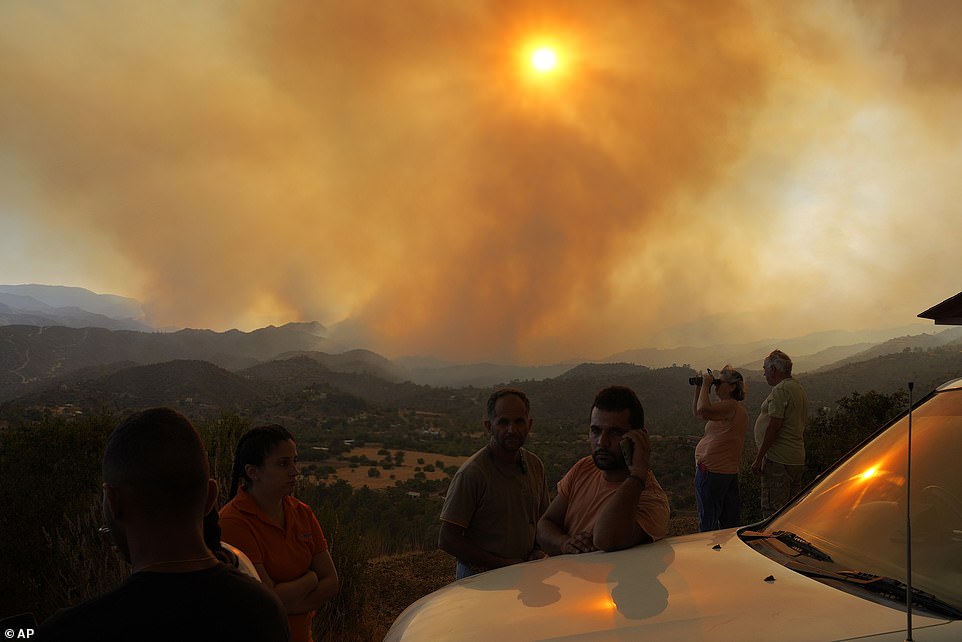 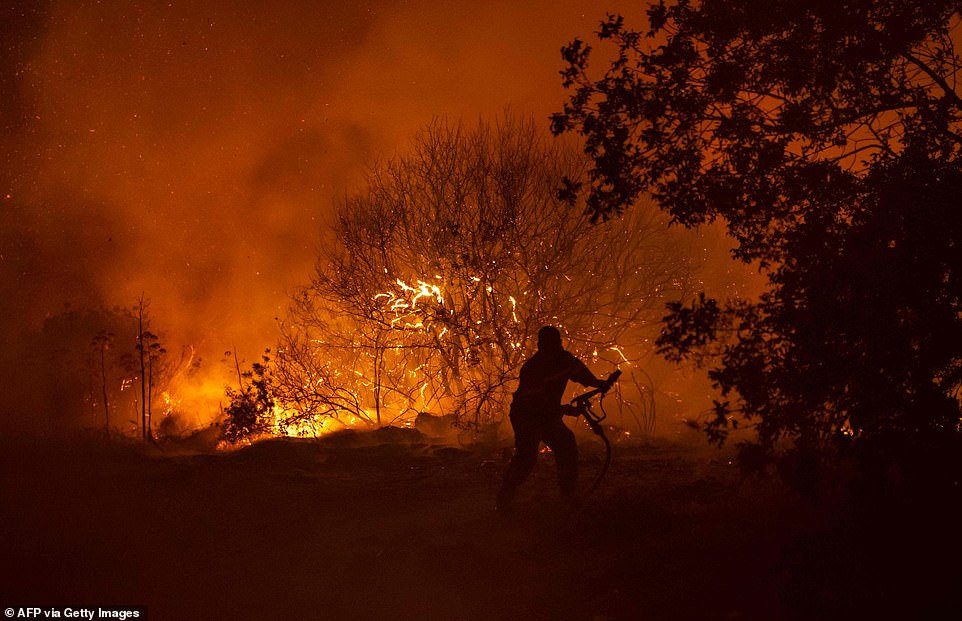 Authorities have said that they are also waiting on confirmation regarding the arrival of two Italian aircraft.

They will join the Greek team, and also Spanish and British crews.

The British Royal Air Force, which has a base at Akrotiri near Limassol, shared images online of its helicopters taking part in the efforts to stop the blaze.

Crews are focusing their efforts on two fire fronts between the villages of Odou and Vavatsinia in a race to prevent it from spreading to the Machairaa National Forest Park.

“It is the worst forest fire in the history of Cyprus,” Director of the Department of Forests Charalambos Alexandrou told local television.

President Anastasiades, who called the fire ‘an unprecedented tragedy’, is currently touring the fire-hit villages, and confirmed that the blaze is ‘partially contained.’ 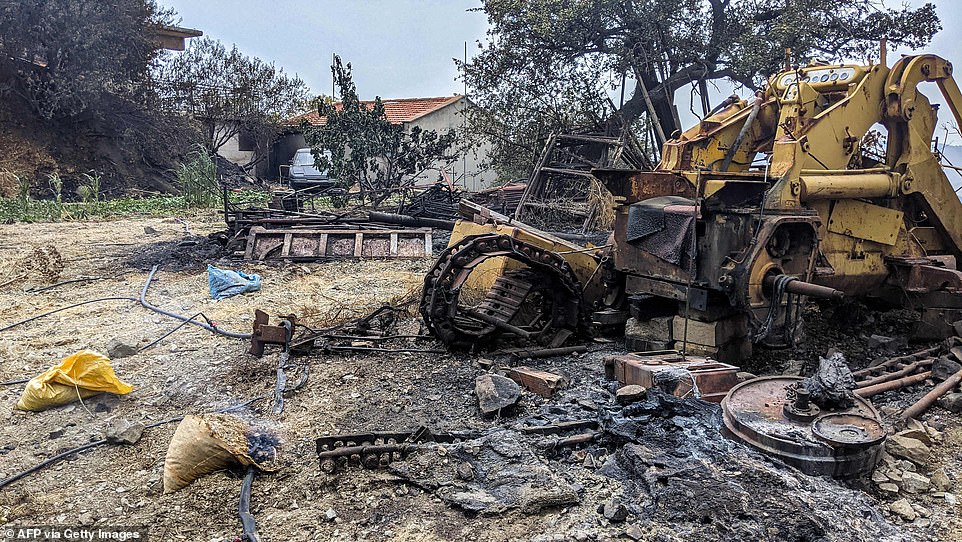 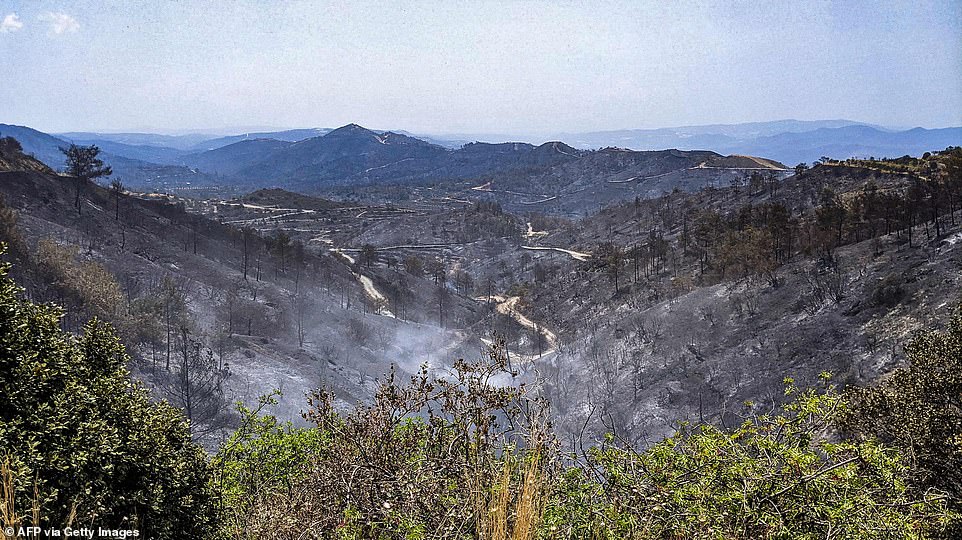 Despite the efforts of fire crews, there are fears that the flames could intensify once again if strong winds reappear 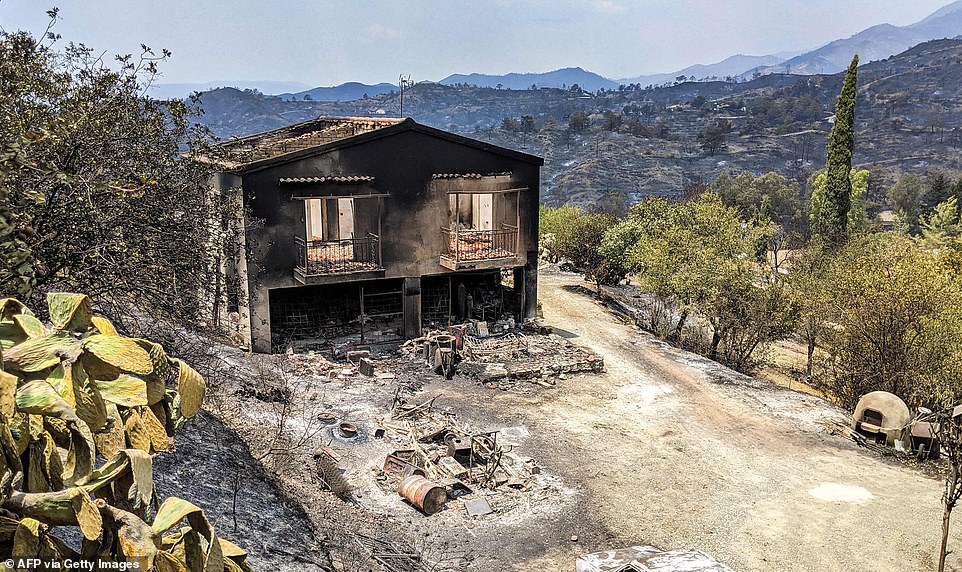 The fire blazed through homes in the village of Ora in the Larnaca district. Elsewhere, the fire rages on. 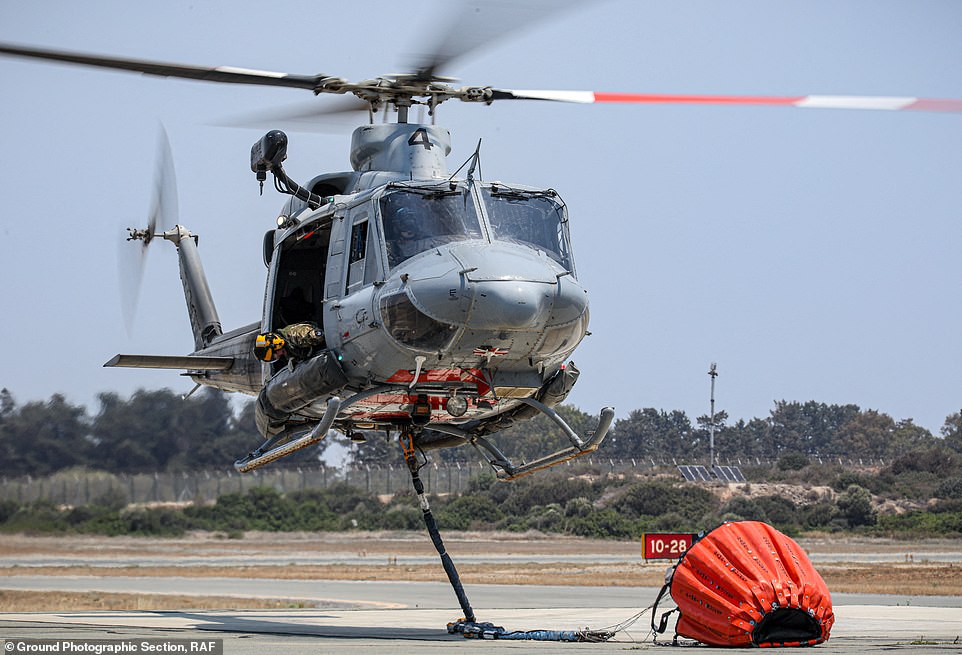 The British Royal Air Force, which has a base at Akrotiri near Limassol, shared images online of its helicopters taking part in the efforts to stop the blaze.

But, there are fears that the flames could intensify once again if strong winds reappear.

Taking to Twitter, he described the blaze as ‘the largest fire since 1974’   when the island was divided after Turkey occupied its northern third.

He said that ‘the government will provide immediate assistance to the victims and the families of the victims.

‘We will not leave anyone abandoned in the destruction of the fire.’

Police have said that a 67-year-old man faces arson charges.

He is currently in custody and will remain there for eight days to assist the investigation into the cause of the fire. 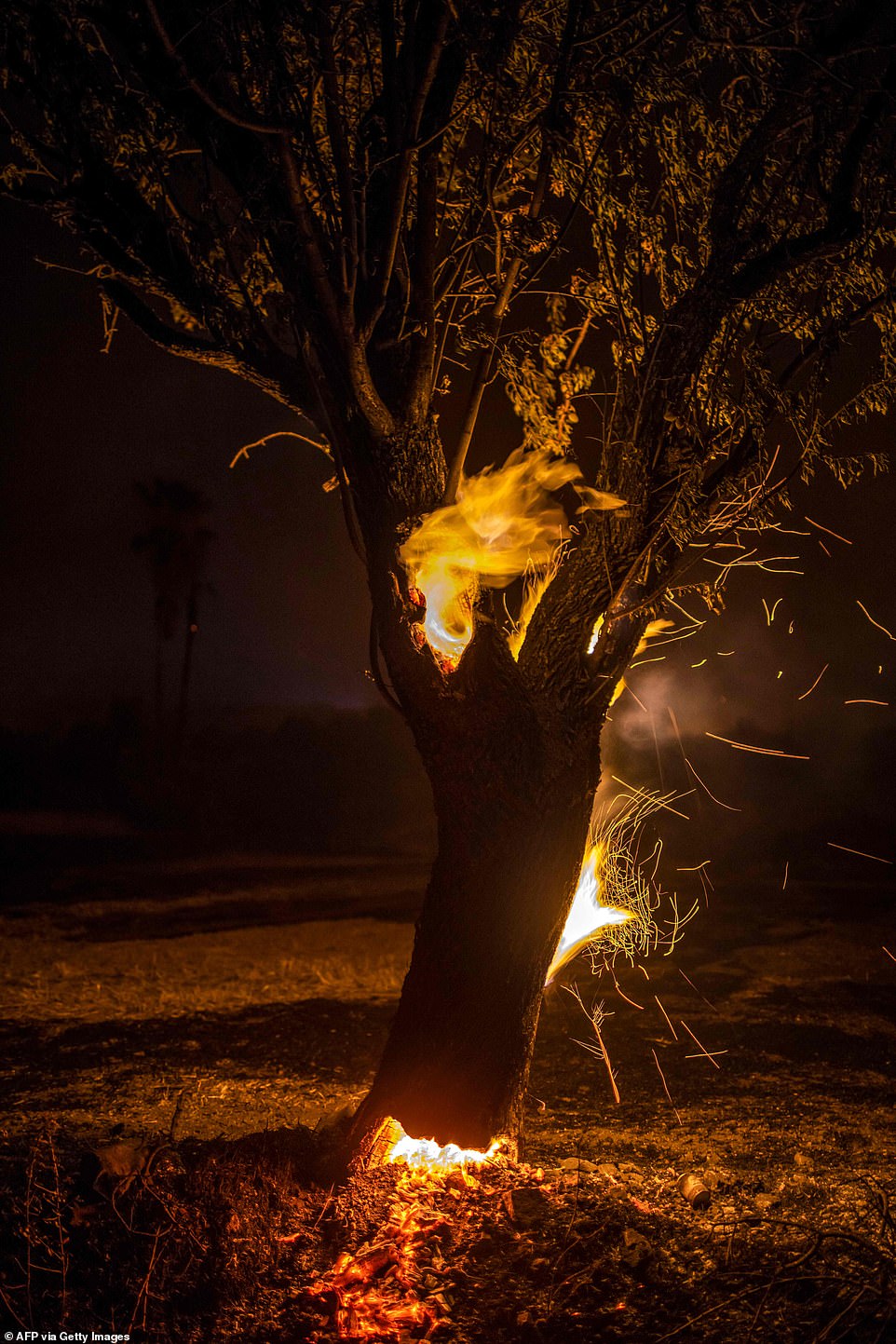 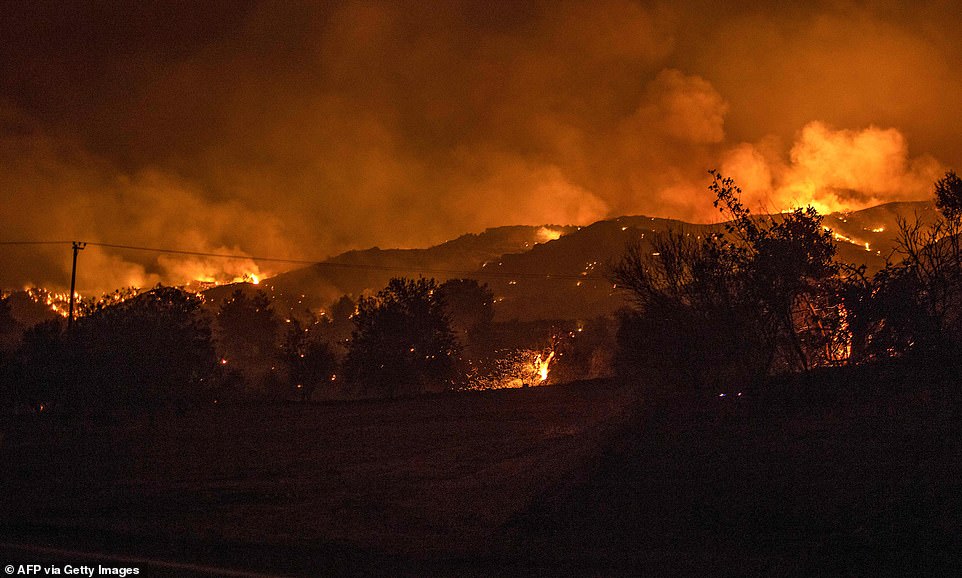 The country has recently been experiencing a heat wave, and has received no rainfall in recent days 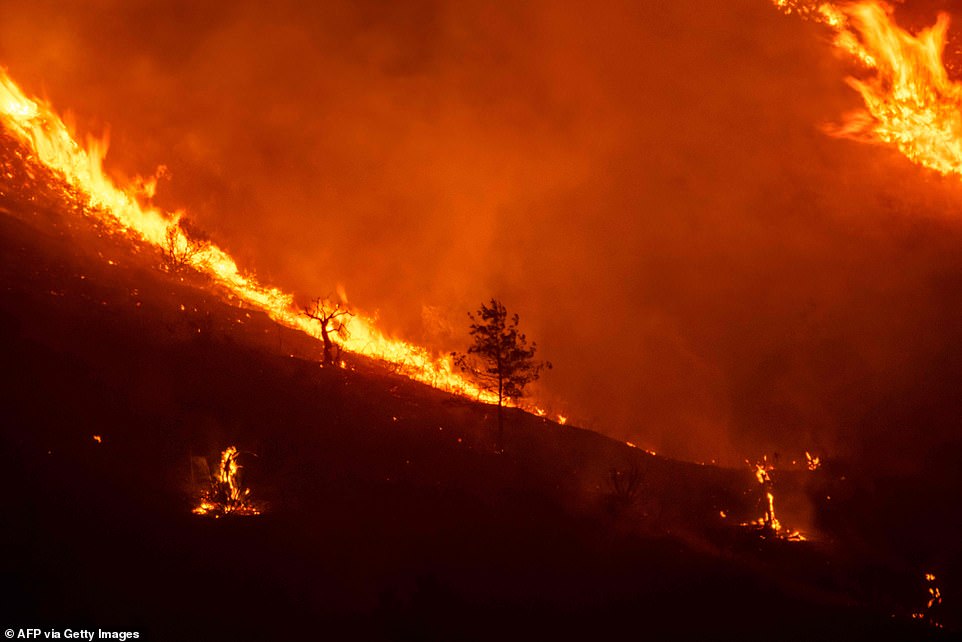 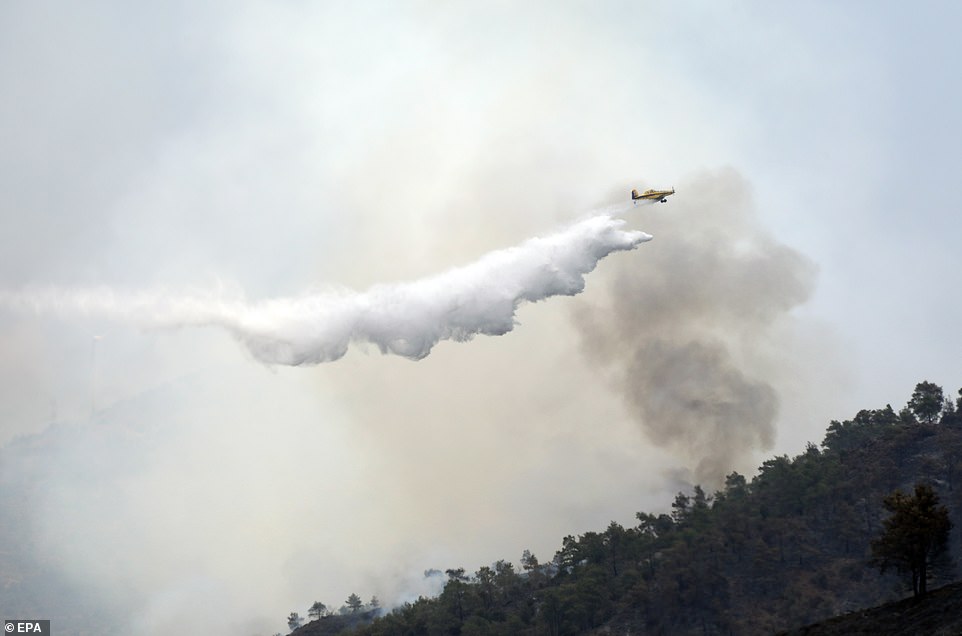 A Canadair flies over the forest fire in the Larnaca mountain region, releasing water to help to put out the flames 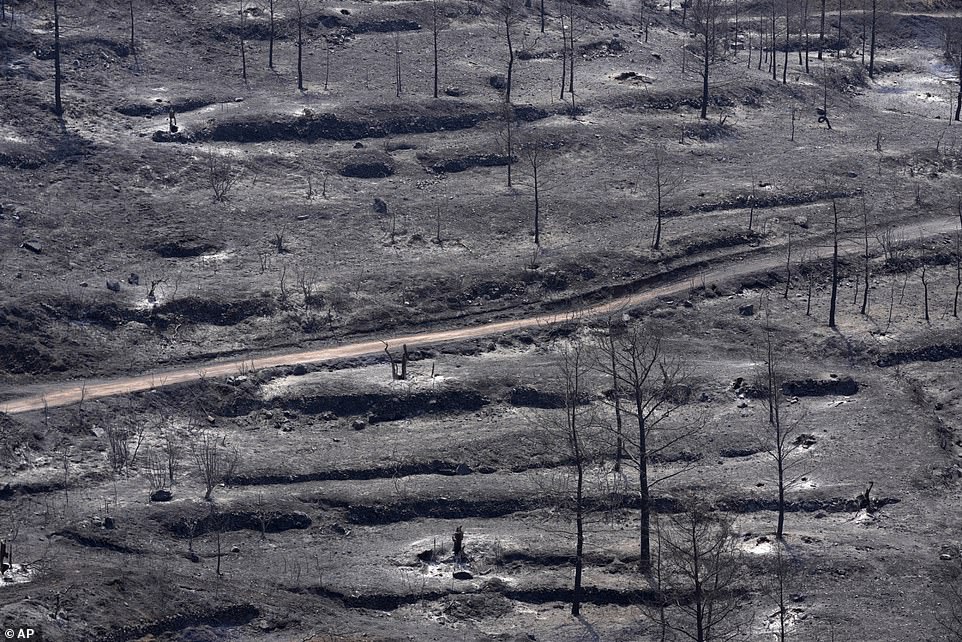 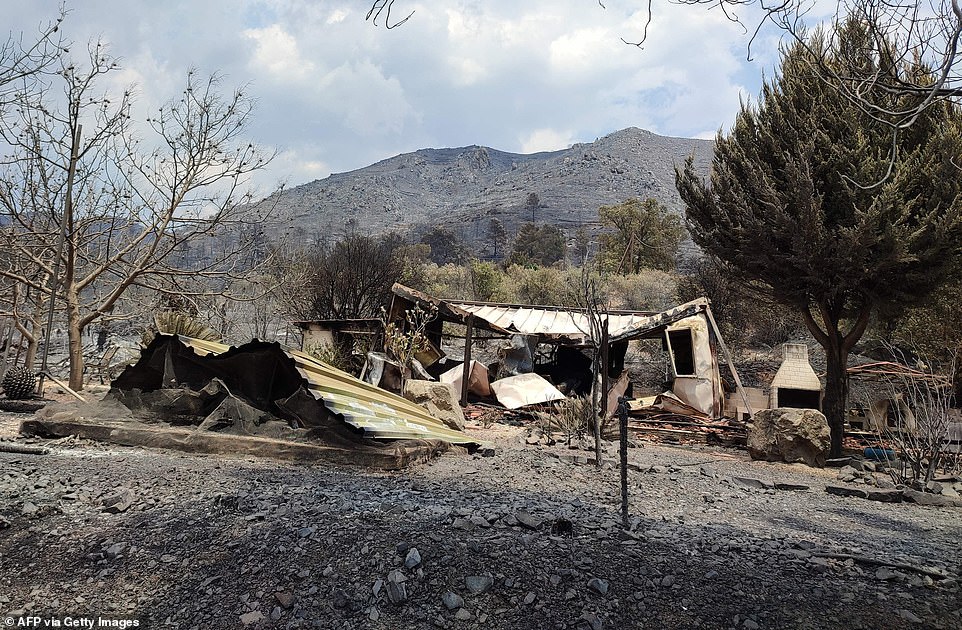 Police said he was spotted by an eyewitness leaving the village of Arakapas in his car at the same time the fire there started.

The country has been experiencing temperatures of around 40 degrees Celsius in recent days, and has had very little rain.

Cyprus has had extended heatwaves and period of drought in recent years.

Experts claim climate change is expected to increase the likelihood and frequency of extreme weather events, including heatwaves, extreme rainstorms, and could contribute to water shortages and drought, economic losses and lower crop yields, and higher sea levels and the destruction of coral reefs.

A report published by the World Meteorological Organisation earlier this year warned that global temperatures could rise above the 1.5C (2.7F) limit set by the UN in just five years. 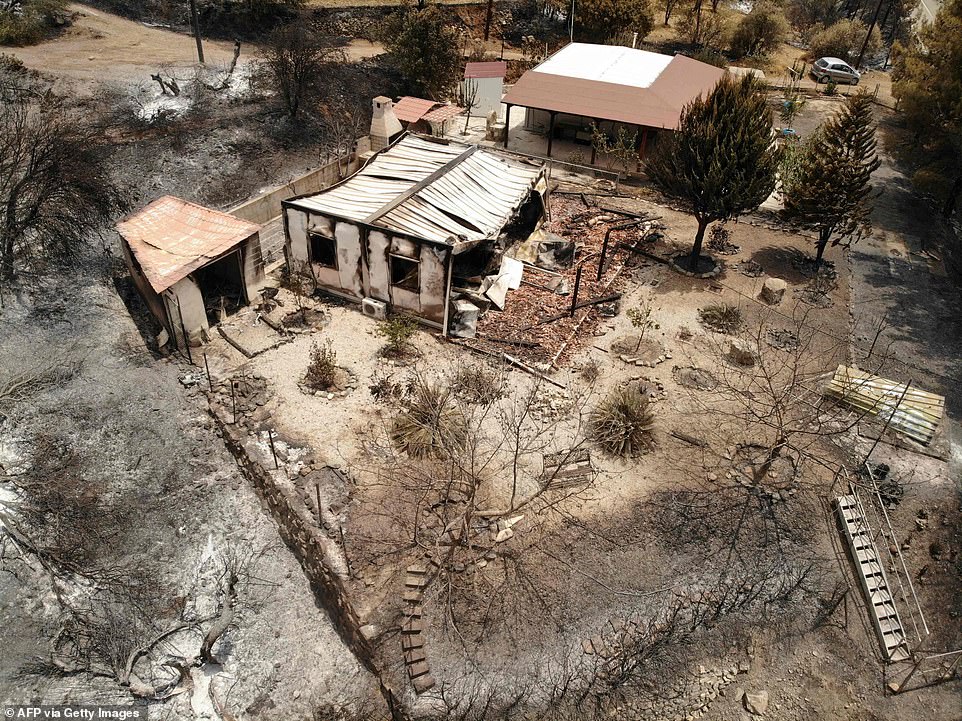 This aerial image shows the extent of the fire on this property, which has left it completely decimated 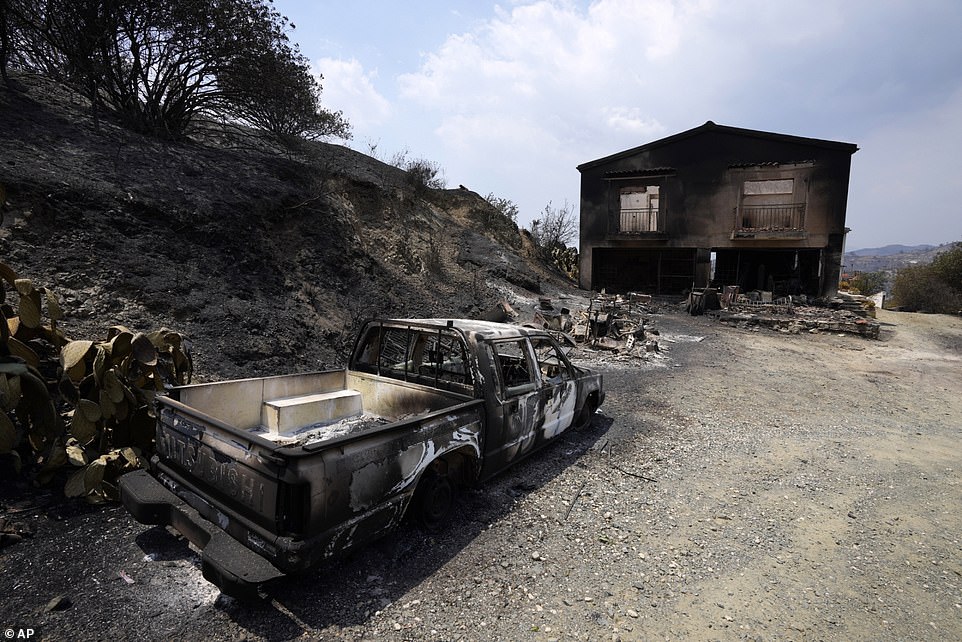 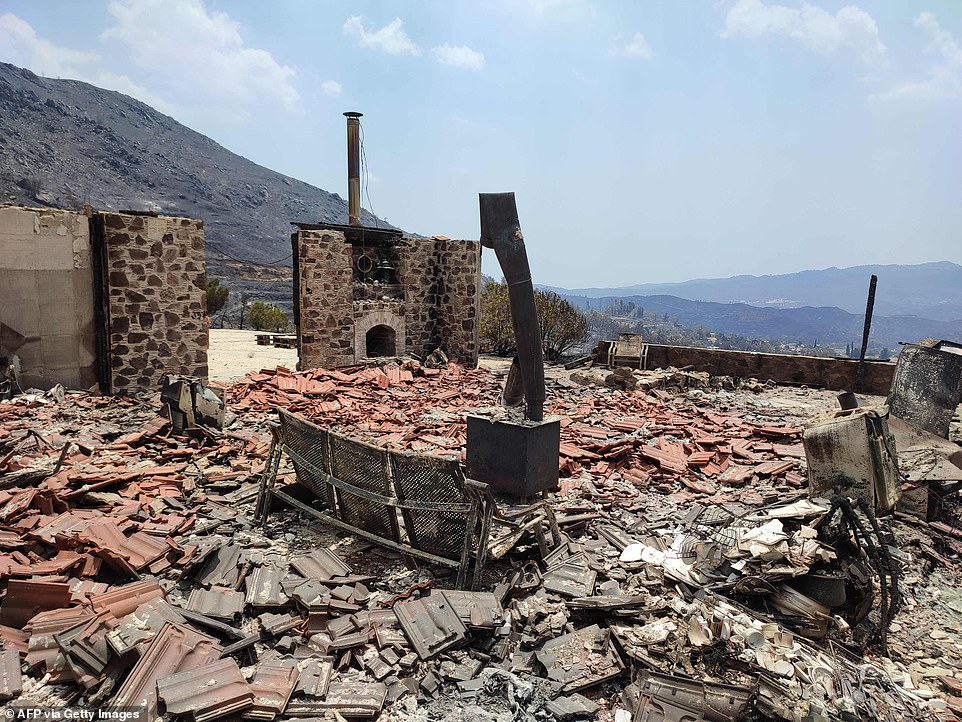 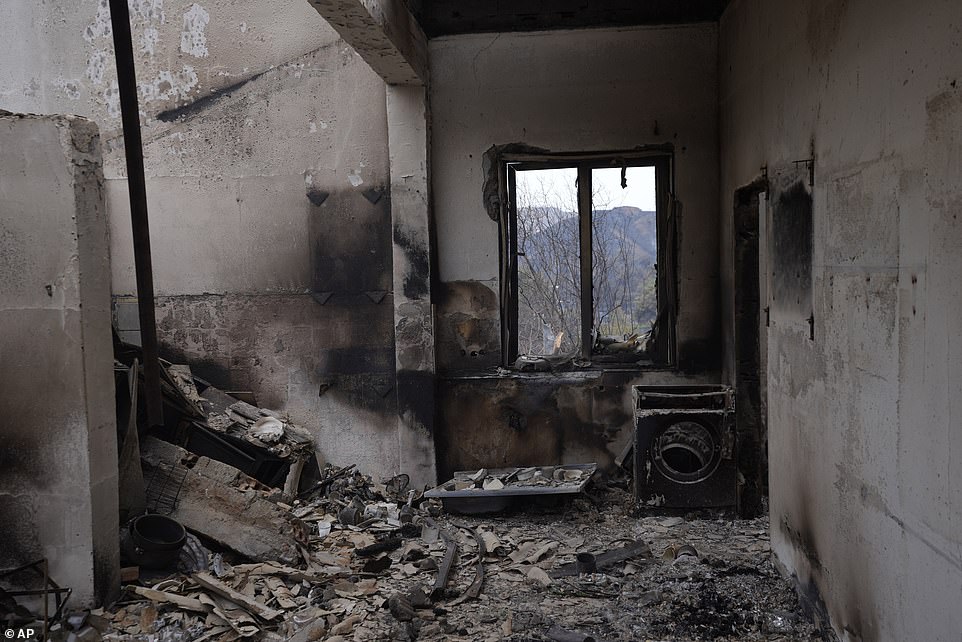 A burnt out house shows the extent of the fire ravaging the mountains, which can be seen in the empty window panes

There is a 40 per cent chance that annual temperature rises will go beyond the level set by the 2015 Paris Agreement, agreed to by 196 countries, it is claimed.

The report published also warned of a very high likelihood – a 90 per cent chance – of at least one year between 2021 and 2025 becoming the warmest on record, outstripping 2016’s record heat.

Global average temperatures of 1.5C (2.7F) above 19th century levels are seen as a threshold beyond which the most dangerous impacts of climate change will be felt.

In 2020, the global average temperature was 1.2C (2.16F) above pre-industrial levels, making it among the three hottest years on record.