Five people were rushed to hospital after collapsing at the Parklife music festival having taken high-strength ecstasy pills.

The ‘branded’ pills were believed to contain between 250 to 300mg of MDMA – three times the amount of active ingredient found in normal ecstasy pills.

Several people were taken to the North Manchester and Fairfield Hospital over the weekend having to be treated for drug and alcohol poisoning. 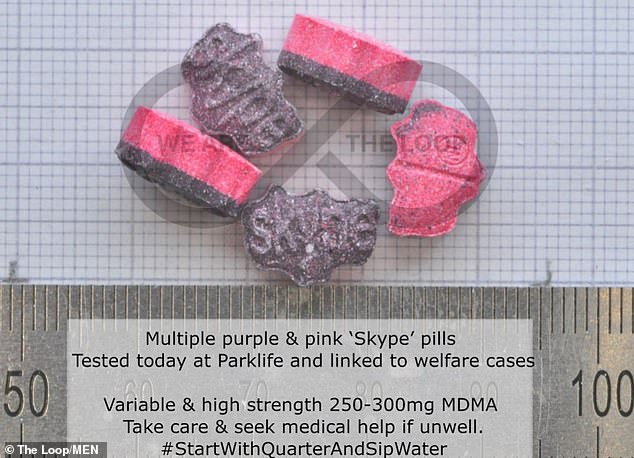 Drugs charity The Loop tested ‘Skype’ pills which were available at the Parklife festival in Heaton Park, Manchester. They discovered the pills contain between 250 and 300mg of MDMA, almost three time the active ingredient of a normal strength pill 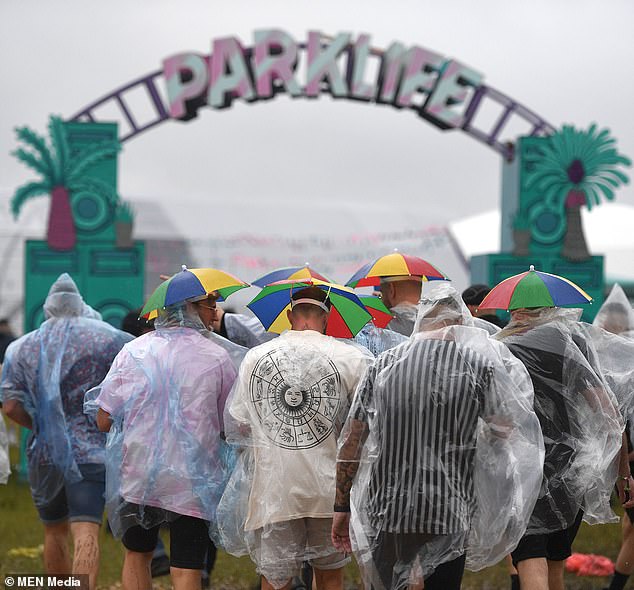 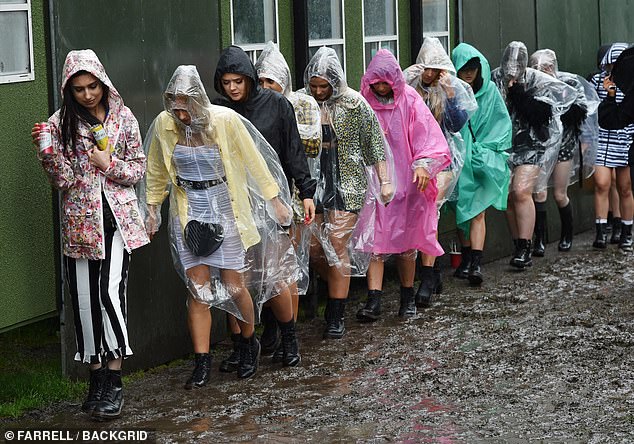 Weather conditions for the two-day event in Heaton Park, Greater Manchester were less than ideal, with the fields quickly churning up into mug

Drug awareness and testing charity The Loop shared images of the Skype pills to warn that they had been ‘linked to welfare cases’.

A spokesman for the North Manchester General Hospital confirmed five patients were ‘critically ill’ having taken the Skype ecstasy pills.

Greater Manchester Police said 25 people were arrested on Saturday while a further 17 were detained on Sunday, mostly for drugs offences.

One 20-year-old man was arrested on suspicion of possession with intent to supply.

Officers seized a quantity of drugs and psychoactive substances from the man as festival-goers arrived for the second day of the festival.

Parklife boss Sacha Lord issued a drugs warning ahead of the festival and urged all those at Parklife to look after each other.

He said: ‘You’ve paid for your ticket and waited all this time to party with your friends and see your favourite acts.

‘There’s 80,000 of you in a park all there for one reason, to have the time of your lives and enjoy the music.

‘Don’t overdo it. Party. But party sensibly. Pace yourselves and enjoy the whole weekend. Look after each other.’

‘This included five patients who were critically ill and needed emergency treatment after taking what was believed to be an illegal MDMA ecstasy substance, known as ‘Skype’.

‘These patients were admitted to hospital.

‘Planning again this year to support the two-day event was successful, with our hospital staff working closely with festival organisers, Greater Manchester Police, North West Ambulance Service and other services before and during to ensure those who attended were kept safe and received appropriate advice, care and treatment where needed.’