Death toll from European heatwave hits more than 1,000: Firefighters battle wildfires in France as record 117F temperatures cause 1,027 fatalities in Portugal and Spain

Firefighters in France and Spain have struggled to contain wildfires raging out of control across Europe, as it continues to wilt under record temperatures that have reportedly killed more than a thousand people.

Fires have also been reported in Portugal, Greece, Turkey and Croatia, and limited wildfires have already been recorded in parts of the UK too – before the heat is set to peak on Monday.

None of the more than 1,000 deaths have been as a result of wildfires, but one firefighter was tragically killed in Portugal after their plane crashed.

Multiple injuries of both civilians and firefighting crews have, however, been recorded as people flee before them.

Footage shows firefighters in France, Spain and Portugal taking to the skies to attack the flames from above, using planes and helicopters to douse the wildfires in water.

Scientists have blamed hundreds of deaths recorded in the past few days on soaring temperatures linked to climate change.

At least 1,000 deaths have been attributed to the heatwave in Portugal and Spain so far, according to the country’s weather agencies, which are reporting 1,027 at this time.

Around 440 deaths were recorded on Thursday alone, when temperatures exceeded 40C (104F) in several regions and 47C (117F) at a meteorological station in the district of Vizeu in the center of the country.

By Saturday, there were 360 heat-related deaths in Spain, according to figures from the Carlos III Health Institute. 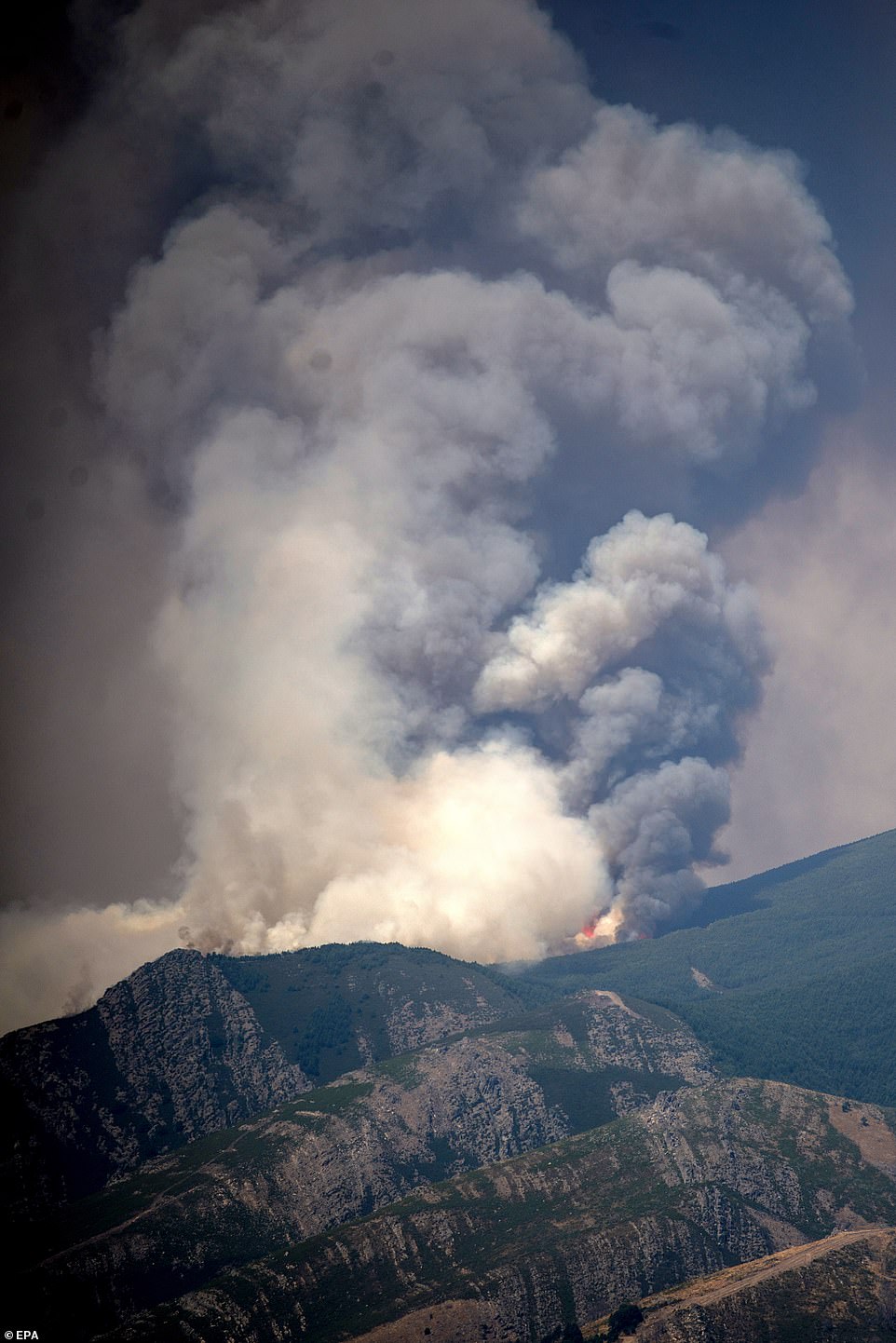 A column of smoke emerges from a forest fire in Vilarino de Conso, Galicia, Spain – it is one of multiple fires which has led to thousands of people being evacuated aross Europe 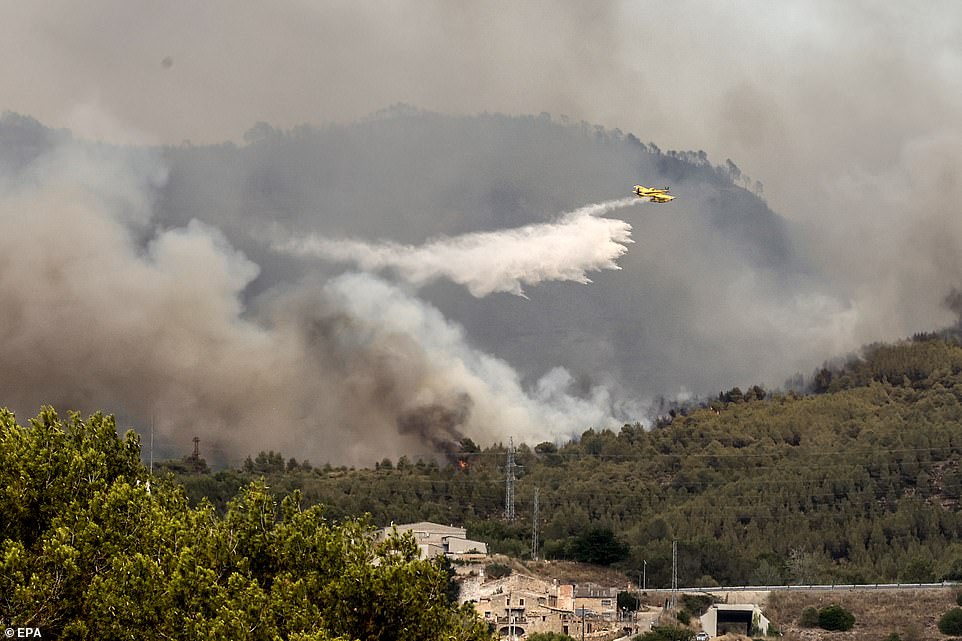 In Portugal one firefighter has been killed when the plane he was flying crashed. (Pictured: A firefighting aircraft drops water on a forest fire originated in Pont de Vilomara, Spain) 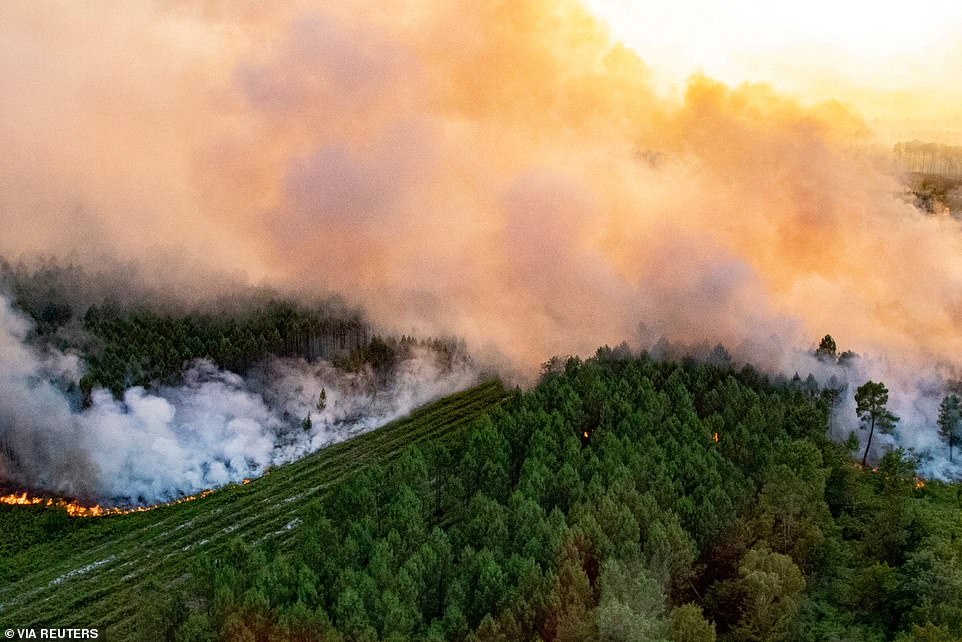 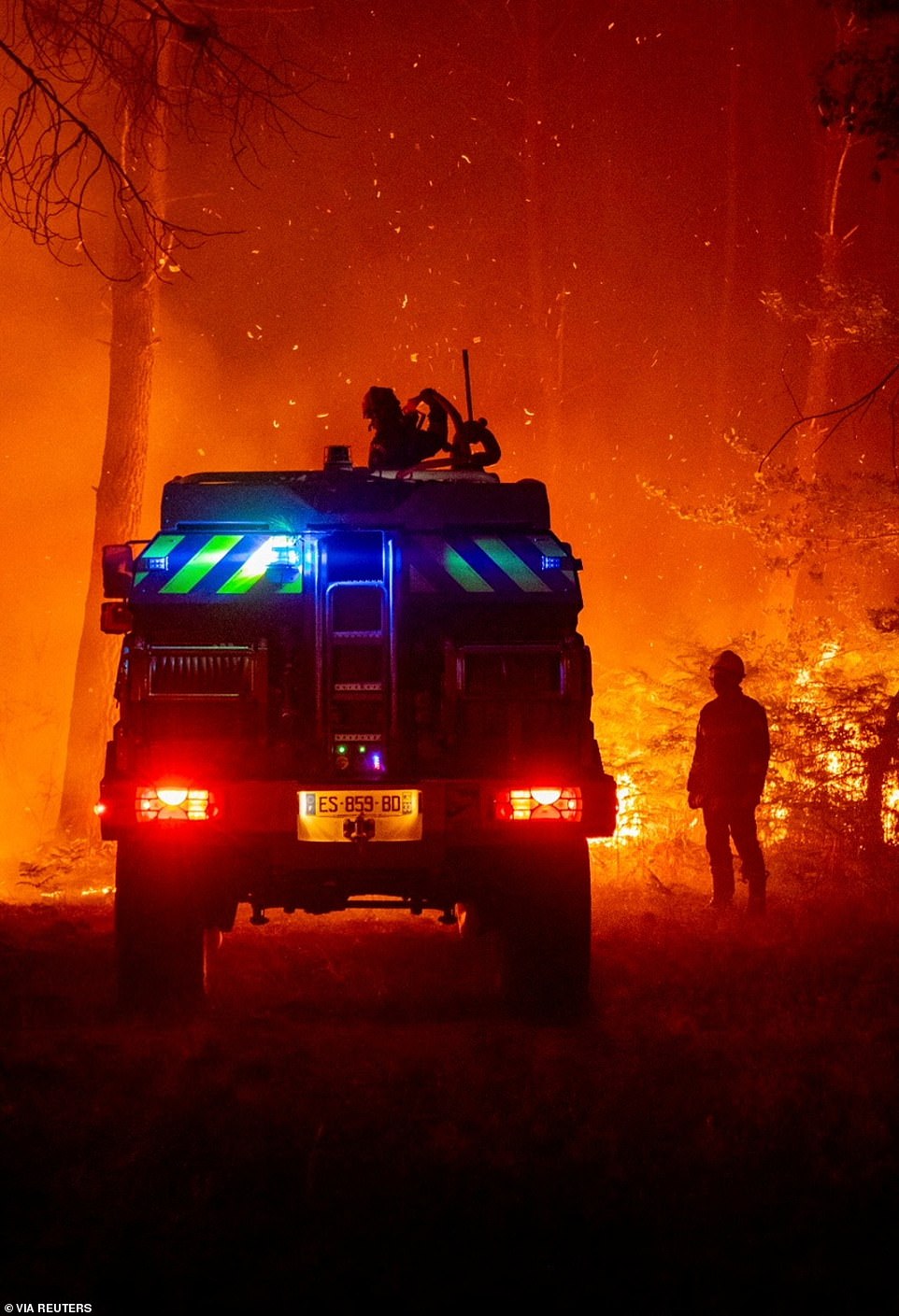 Two huge blazes that have been consuming pine forests for six days south of Bordeaux forced 14,000 people to evacuate 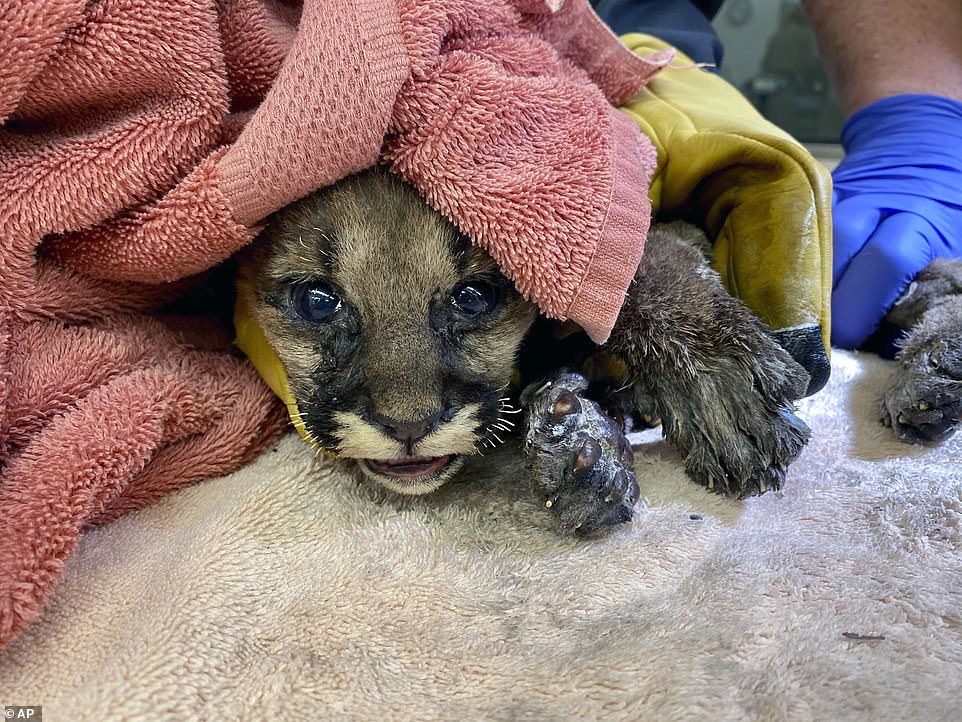 As well as thousands being evacuated, these wildfires also have horrific consequences for animals who are often injured, such as this mountain lion club, or are killed 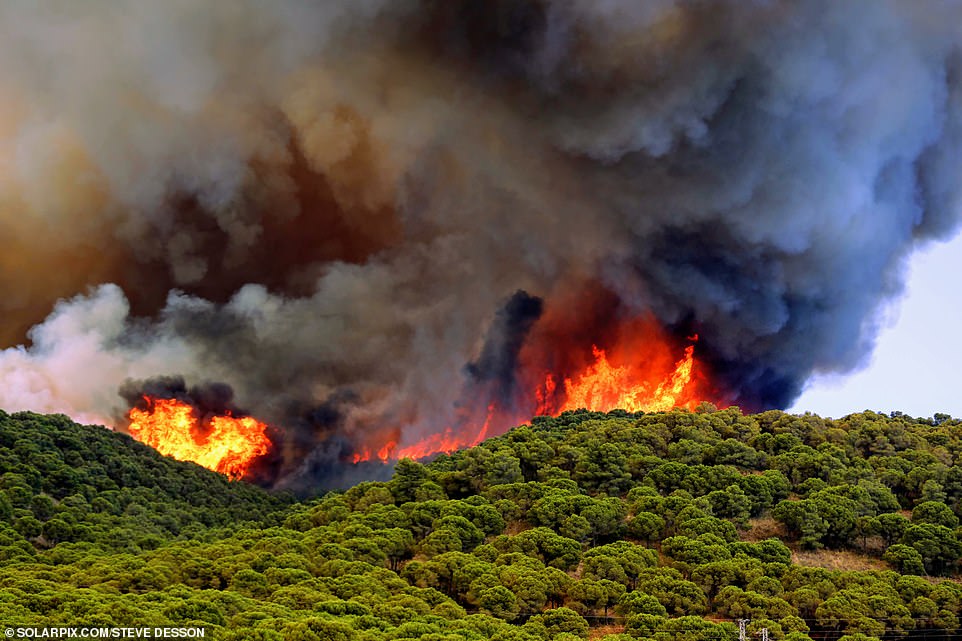 More than 2,000 people including dozens of Brits have been evacuated from their homes because of a Costa del Sol wildfire 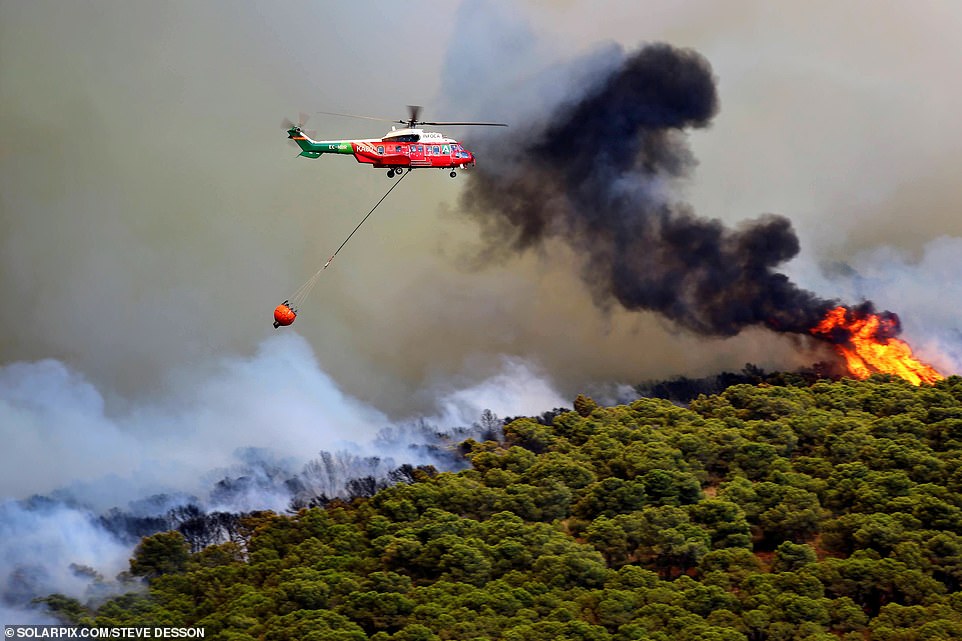 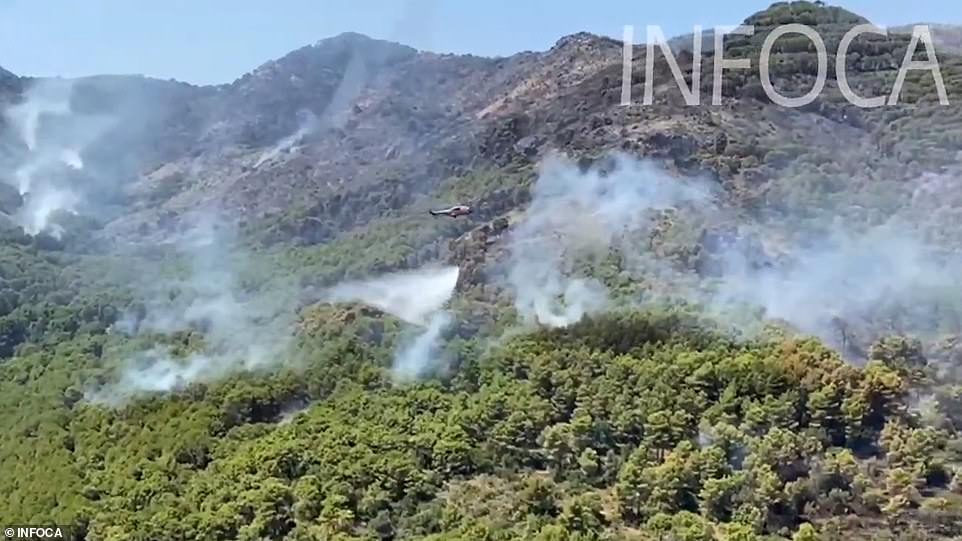 This forced the evacuation of more than 14,000 people, including many spending their holidays at campsites.

In Spain, firefighters supported by the armed forces’ emergency brigades are trying to stamp out more than 30 fires consuming forests spread across the country.

Spain’s National Defence Department said ‘the majority’ of its firefighting aircraft have been deployed as many areas are rugged, hilly terrain that makes it difficult for ground crews to access.

In France, a wildfire in La Teste-de-Buch near the Atlantic coast has forced 10,000 people to flee.

The Gironde regional government said on Sunday that ‘the situation remains unfavourable’ due to gusting winds that, combined with hot and dry conditions, have fanned more flare-ups overnight.

A second fire near the town of Landiras, south of a valley of Bordeaux vineyards, has forced authorities to evacuate 4,100 people this week, including some 1,900 on Saturday.

In Spain, helicopters dropped water on the flames as heat above 40 Celsius (104 Fahrenheit) and often mountainous terrain made the job harder for firefighters.

A study published in June in the journal ‘Environmental Research: Climate’ concluded it was highly probable that climate change was making heatwaves worse.

Temperatures in Spain have reached as high as 45.7C (114F) during the nearly week-long heatwave.

Spain’s weather agency issued temperature warnings for Sunday, with highs of 42 Celsius (108 Fahrenheit) forecast in Aragon, Navarra and La Rioja, in the north. 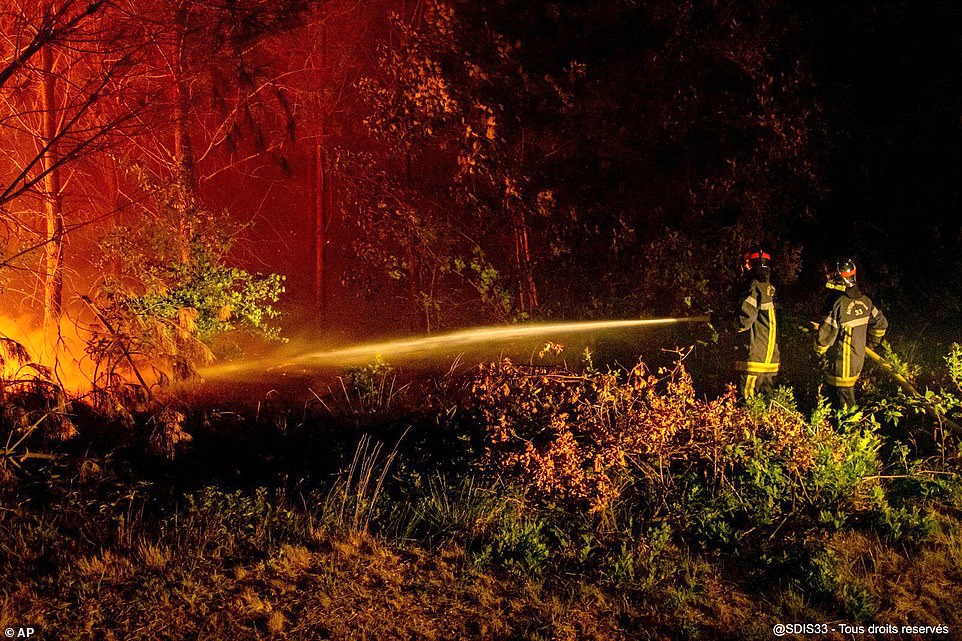 In France, wildfires have now spread over 11,000 hectares (27,000 acres) in the southwestern region of Gironde 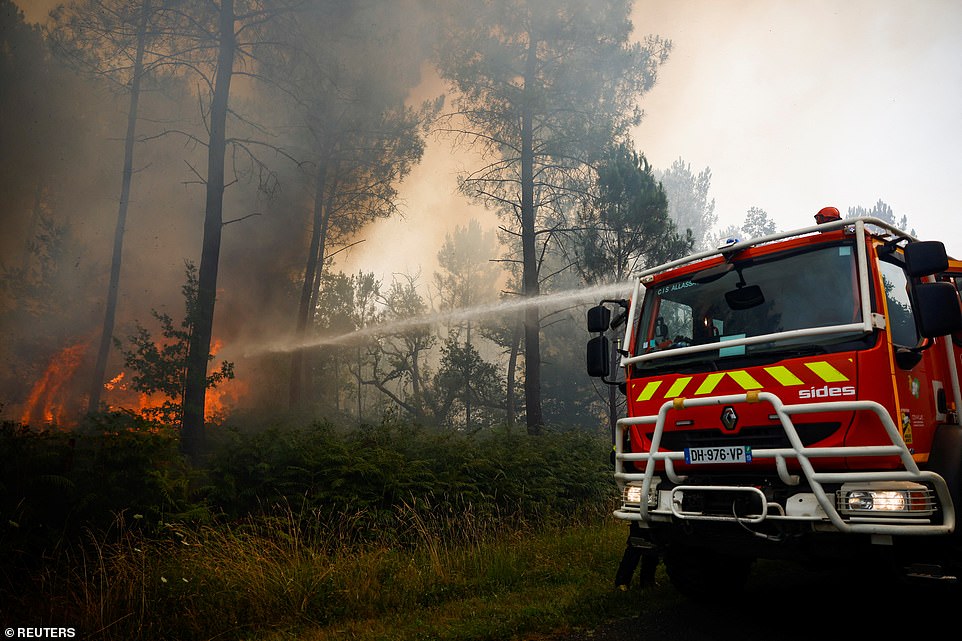 A firefighting truck works to contain a fire near Louchats, Gironde earlier today 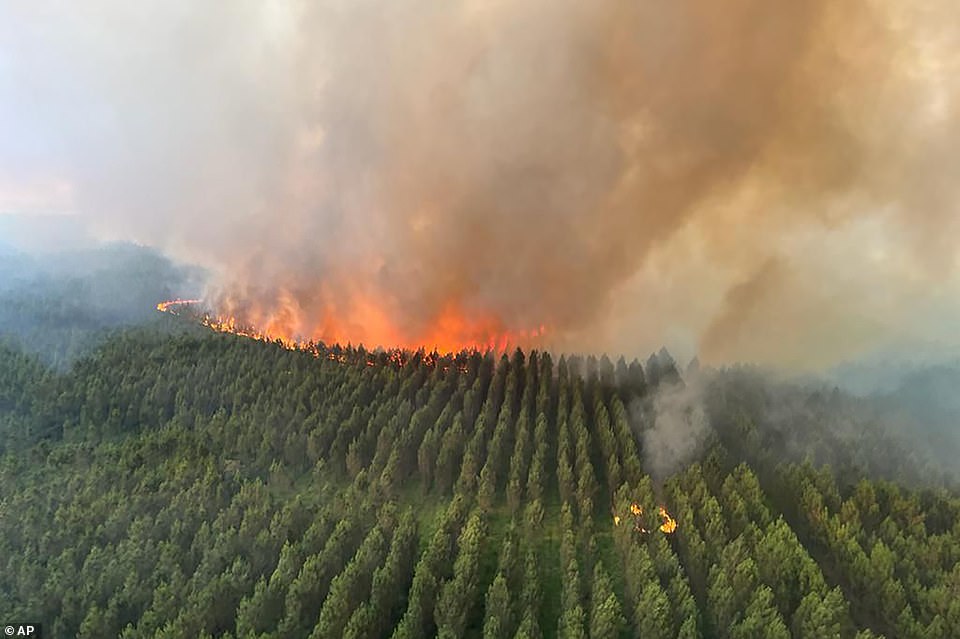 In southwestern France, flames have destroyed some 7,700 hectares since Tuesday and forced the evacuation of 11,000 people

It said the heatwave would end on Monday, but warned temperatures would remain ‘abnormally high.’

Fires were raging in several other regions including Castille and Leon in central Spain and Galicia in the north on Sunday afternoon. In Malaga province in southern Spain, wildfires raged into the night, affecting local residents near Mijas, a town popular with northern European tourists.

British pensioners William and Ellen McCurdy fled for safety with other evacuees in a local sport center from their home on Saturday as the fire approached.

‘It was very fast …. I didn’t take it too seriously.

‘I thought they had it under control and I was quite surprised when it seemed to be moving in our direction,’ William, 68, told Reuters.

‘We just grabbed a few essentials and just ran and by that stage everybody along the street was on the move,’ Ellen said.

In France, wildfires have now spread over 11,000 hectares (27,000 acres) in the southwestern region of Gironde, and more than 14,000 people have been evacuated, regional authorities said on Sunday afternoon.

More than 1,200 firefighters were trying to control the blazes, the authorities said in a statement. 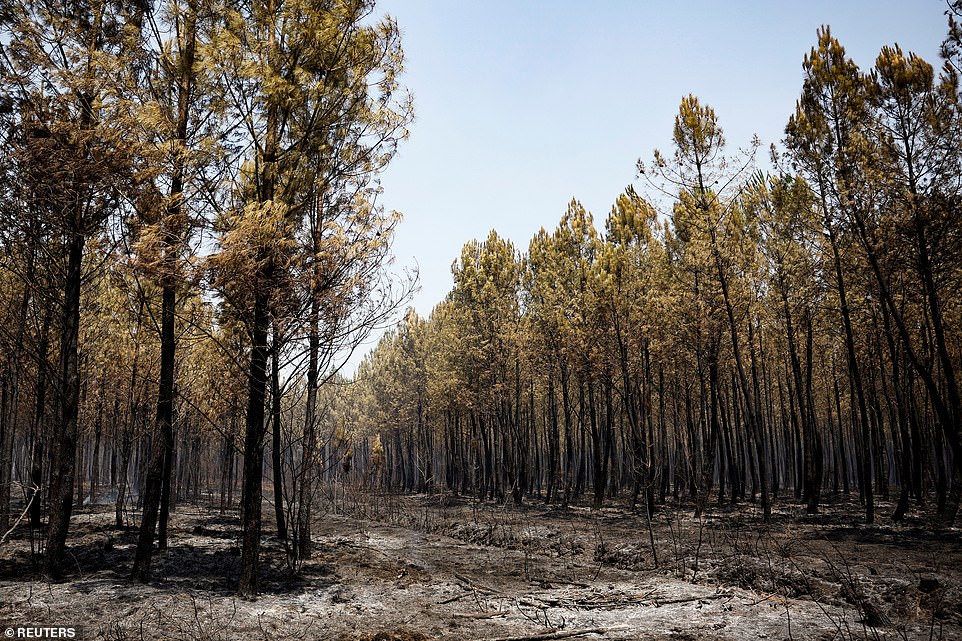 More than 1,200 firefighters were trying to control the blazes affecting Gironde, where patches of forest were burned down 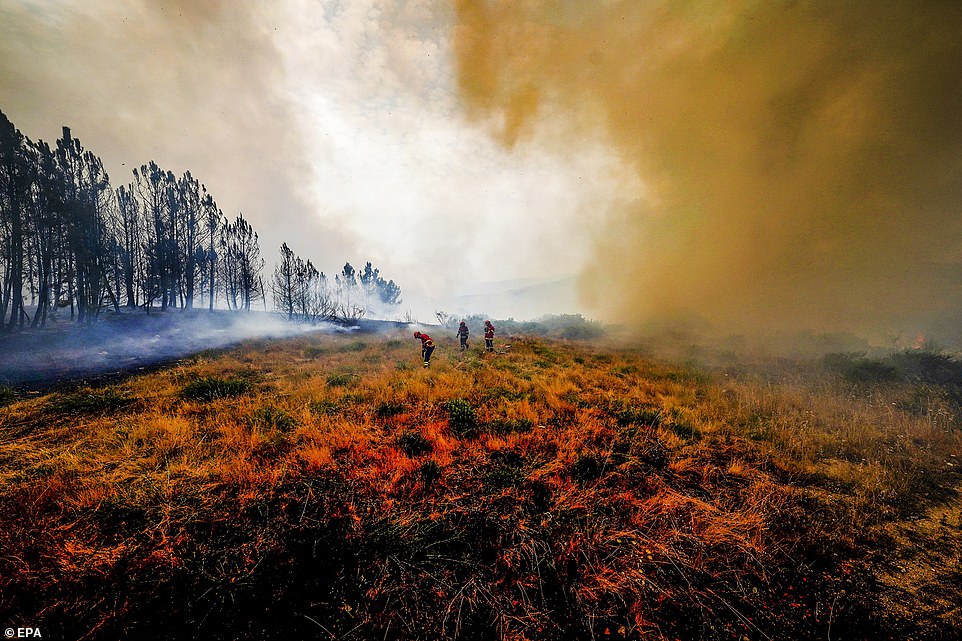 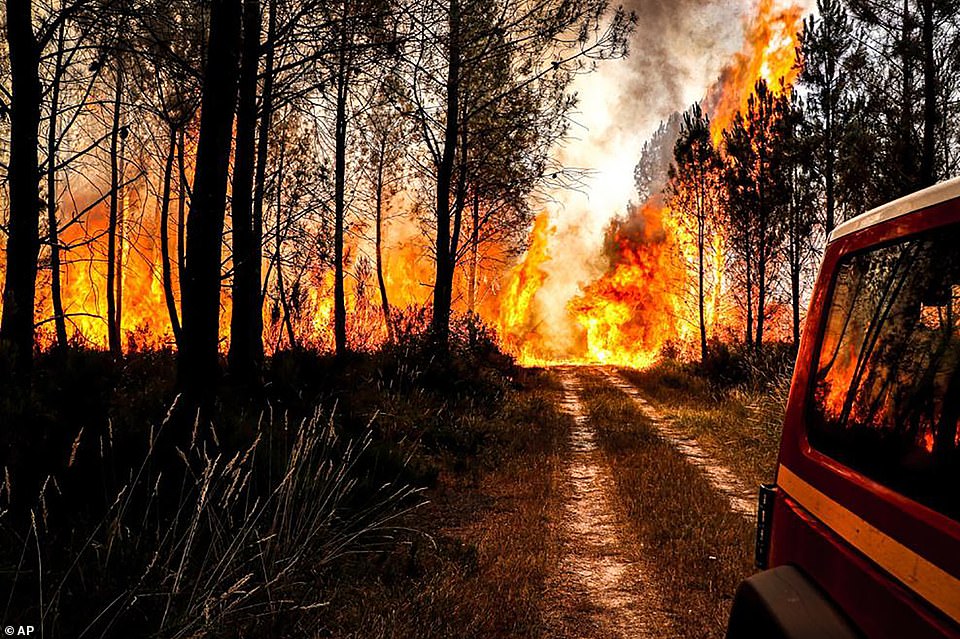 In Italy, where smaller fires have blazed in recent days, forecasters expect temperatures above 40C in several regions in coming days.

Similar temperatures are forecast in Britain on Monday and Tuesday in what would top a previous official record of 38.7C (102F) set in Cambridge in 2019.

Britain’s national weather forecaster has issued its first red ‘extreme heat’ warning for parts of England, and a level four health warning has also been issued.

This means the high temperatures could have impacts beyond health and social care with potential effects on transport systems, food, water, energy supplies and businesses.

Rail passengers were advised to only travel if absolutely necessary and to expect widespread delays and cancellations.

Portugal’s Health Ministry said late on Saturday that in the last seven days 659 people died due to the heatwave, most of them elderly.

Portugal is grappling with extreme drought – with 96% of the mainland in severe or extreme drought at the end of June, before the recent heatwave, according to data from the national meteorological institute.

Last week thousands of firefighters were tackling blazes across the nation, and at least 29 people have been injured in the flames.

In Greece the fire brigade said on Saturday 71 blazes had broken out within a 24-hour period. Local fire brigade officials on the island of Crete said on Sunday that a fire raging through forest and farm land had been partially contained.

And wildfires have destroyed 3,500 acres of land in Extremadura in Spain.

It is unknown how many animals have been killed or injured in these fires, but it is expected that many have fallen victim to the increasingly unforgiving weather systems.