Turkey is battling its ‘worst fires in living memory’ as infernos raging across the country’s south entered their sixth consecutive day today – with no end to the crisis in sight.

Worst-hit are the provinces of Antalya and Mugla – which contain the popular tourist resorts of Marmaris and Side – where swathes of forest have been destroyed – leaving eight dead, and forcing travellers and locals to evacuate.

Nine fires are still burning in those two provinces, forestry officials said today, fanned by strong winds and fed on timber dried to a crisp by a 40C heatwave. Such is the extent of the damage, they were unable to guess at how many acres had been destroyed.

Smaller fires were also burning in Adana and Isparta as critics hit out at President Erdogan, accusing him of leaving the country unprepared for the crisis and of failing to reach out to western countries for help sooner.

Help is now on the way after celebrities and regional ministers appealed for help on social media, with water-carrying planes sent from Spain, Croatia and Ukraine after it emerged Turkey does not have access to any. 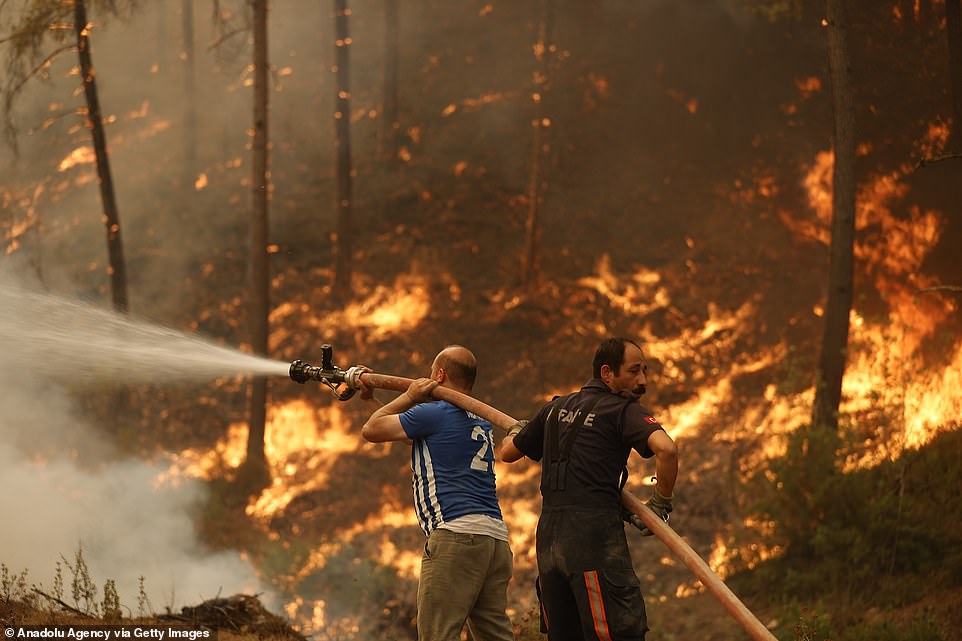 Two men fight a desperate battle against flames engulfing woodland in Turkey’s Antalya province, where fires have now been burning for six days and show no signs of stopping 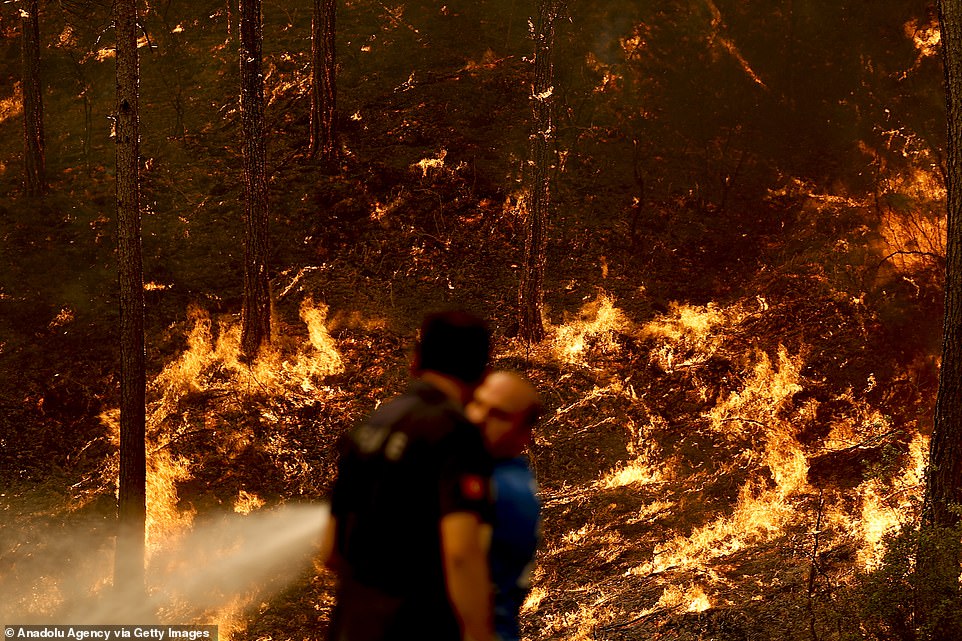 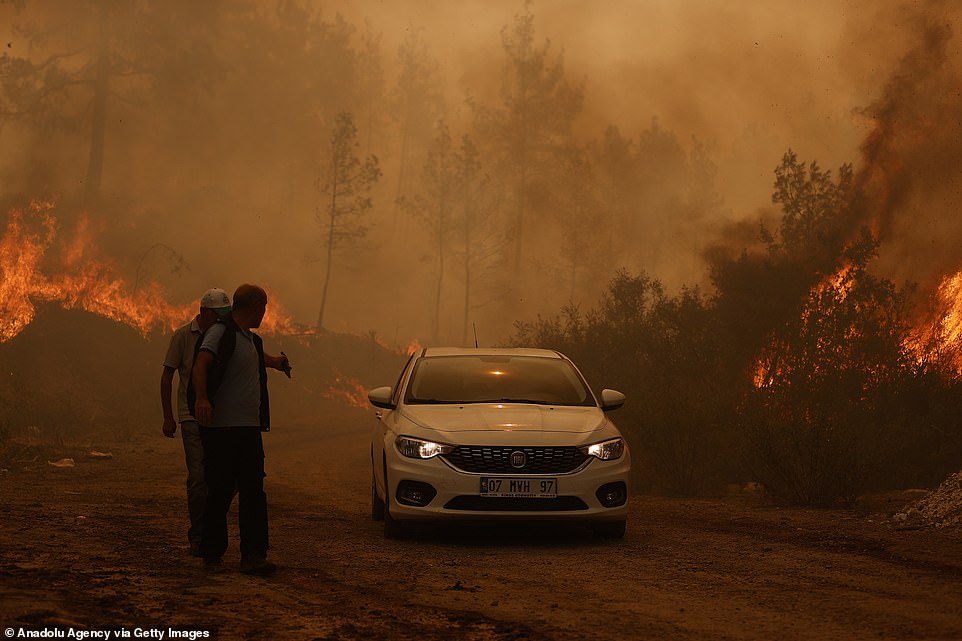 A car drives through smoke-filled skies and past firefighters who are trying to douse nine blazes across Turkey’s Antalya and Mugla provinces, where at least eight people have died and dozens have been injured 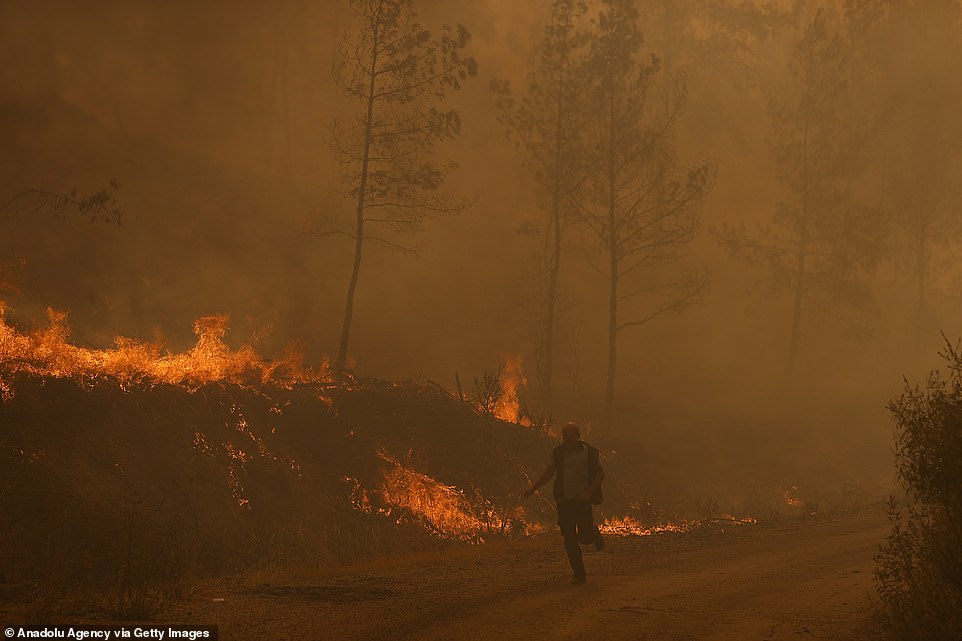 A man flees from flames during efforts to extinguish nine fires in southern Turkey that have been raging for six days, fed on tinder-dry vegetation and fanned by strong winds 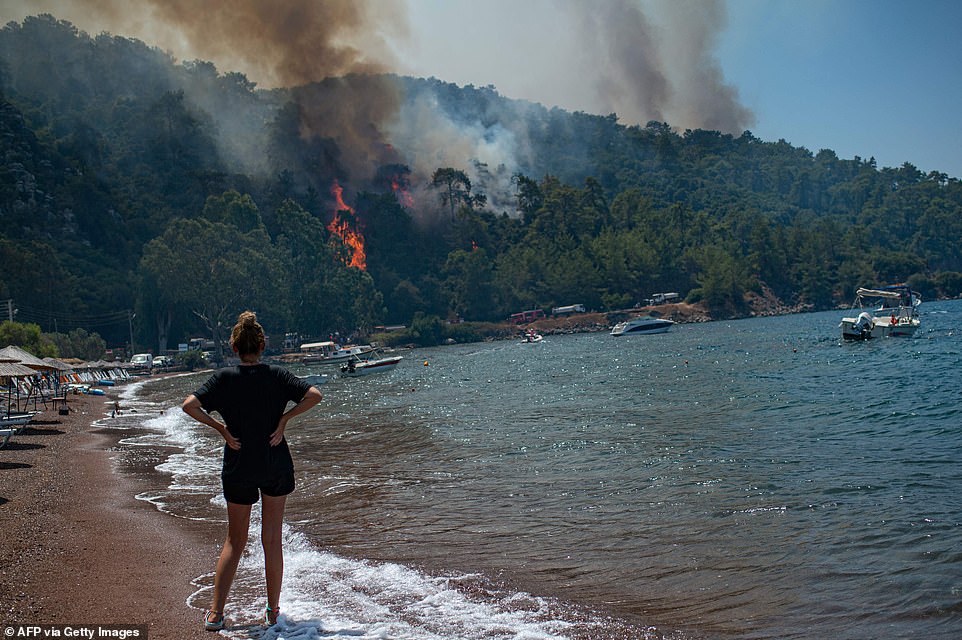 A woman at a resort on Turkey’s southern coast watches as flames get closer to the beach. Hundreds of locals and tourists have already been forced to evacuate as the fires rip through woodland

A senior forestry official described the fires as the worst in living memory, saying it is impossible to tell how long it will take to put out the flames as patches that had previously been brought under control were reignited by winds.

As residents lost homes and livestock, anger turned towards the government, which admitted it did not have a firefighting aircraft fleet and that existing planes were not in usable condition.

Opposition parties accused the government of failing to procure firefighting planes while channelling funds for construction projects they say are harmful to the environment.

Mr Erdogan’s government has also been accused of compromising firefighting efforts by refusing help from Western nations, including rival Greece, during the early stages. 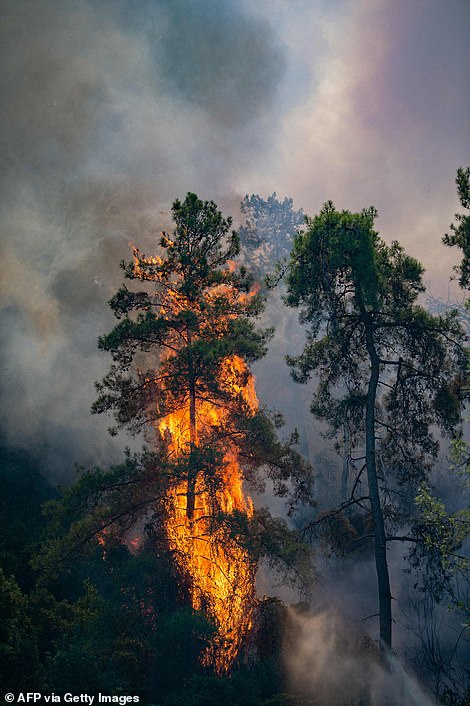 A tree is engulfed by flames as wildfires rip through the south of Turkey, causing devastation so widespread that officials are unable to estimate its true scale

Agriculture and forestry minister Bekir Pakdemirli rejected the accusation, saying the government had only refused offers of planes whose water-dumping capacities were less than five tons.

The Israeli embassy said Israel had also offered to help but Turkish officials had refused, saying the ‘situation is under control’.

The campaign drew an angry response from a senior Erdogan aide, Fahrettin Altun, who said: ‘Our Turkey is strong. Our state is standing strong.’

Fire-dumping planes from Russia, Iran and Azerbaijan are already at work in the country. A total of 16 planes, 51 helicopters and more than 5,000 personnel were tackling the fires, officials said.

Health minister Fahrettin Koca said 36 people in Mugla and 11 people in Antalya were being treated in hospitals for fire-related injuries.

Authorities have launched investigations into the cause of the fires, including possible sabotage by Kurdish militants, but experts mostly point to climate change, along with accidents caused by people.

A heatwave across southern Europe, fed by hot air from North Africa, has led to wildfires across the Mediterranean, including in Italy and Greece.

In Italy, the head of the civil protection agency, Fabrizio Curcio, described wildfires affecting much of central and southern Italy as ‘dramatic’.

Authorities in Greece closed the Acropolis and other ancient sites during afternoon hours as temperatures reached 42C in parts of the Greek capital.

Greek authorities described the heatwave as the most intense in more than 30 years.

The Fire Service maintained an alert for most of the country on Tuesday, while public and some private services shifted operating hours to allow for afternoon closures. 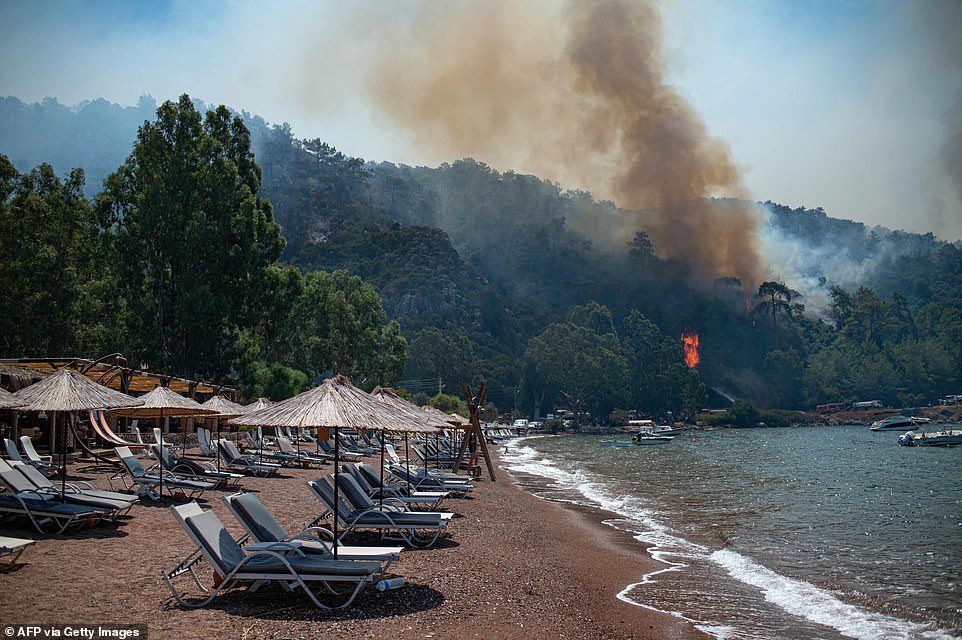 Umbrellas and sunbeds sit on the beach near Marmaris, Mugla province, as flames torch trees in surrounding woodlands 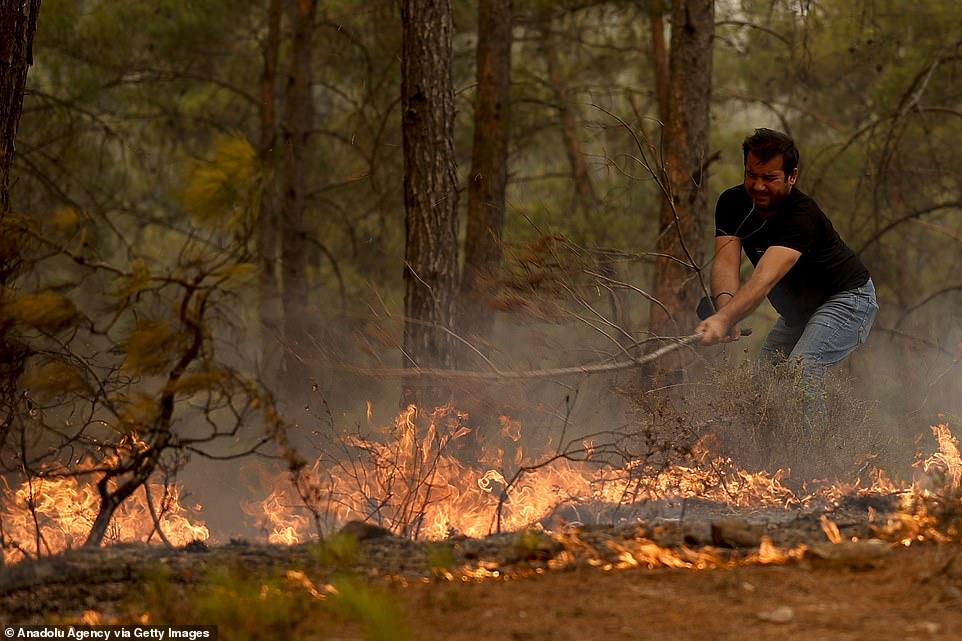 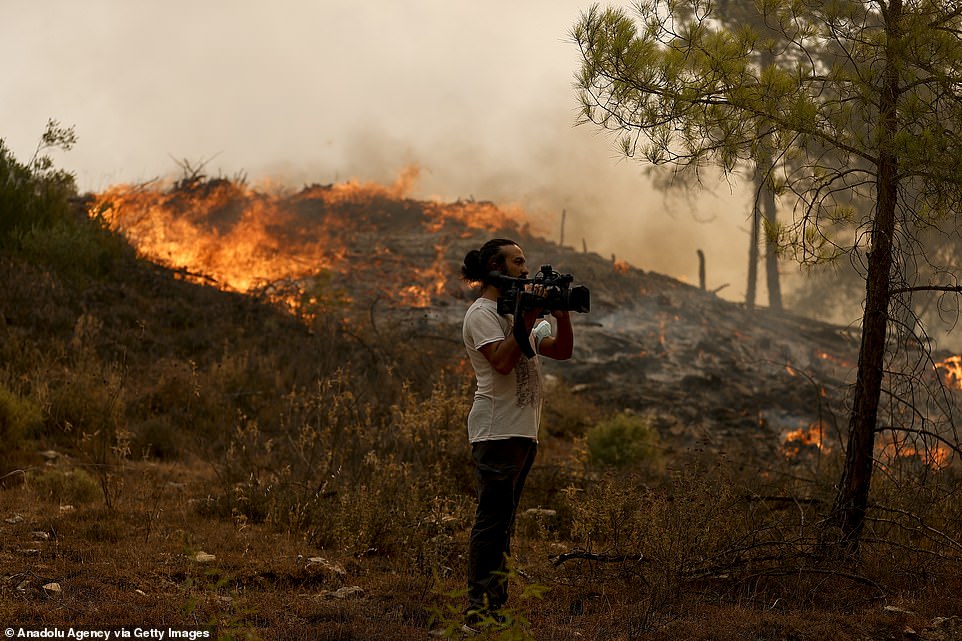 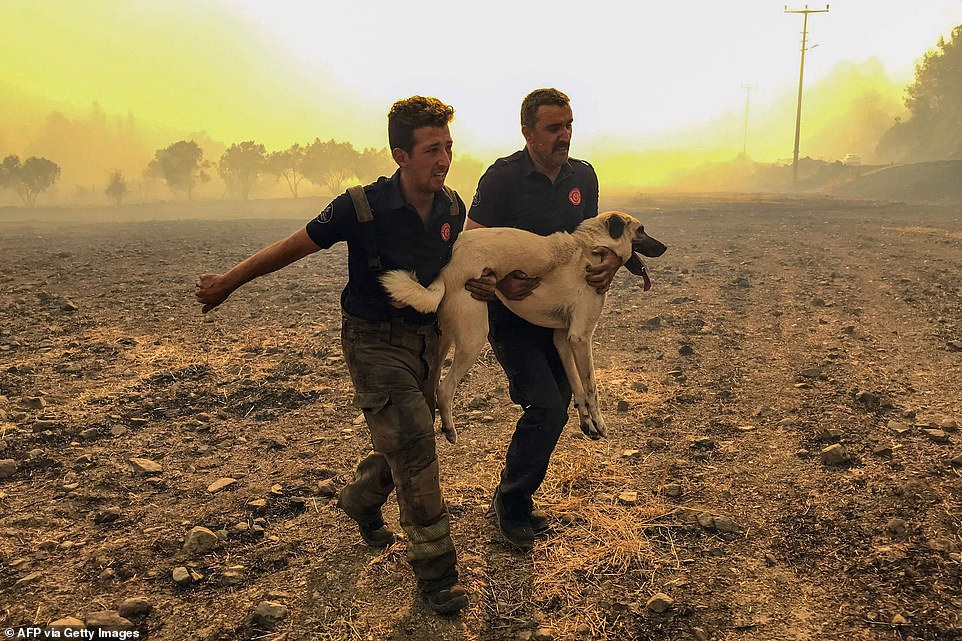 Two firefighters rescue a dog from flames in southern Turkey, where fires have now been raging for six days 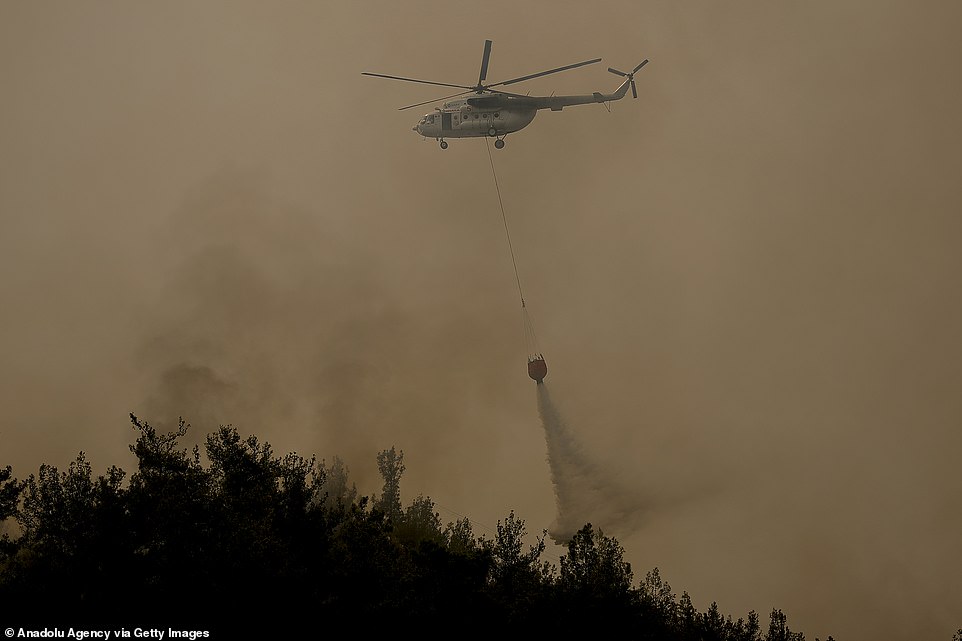 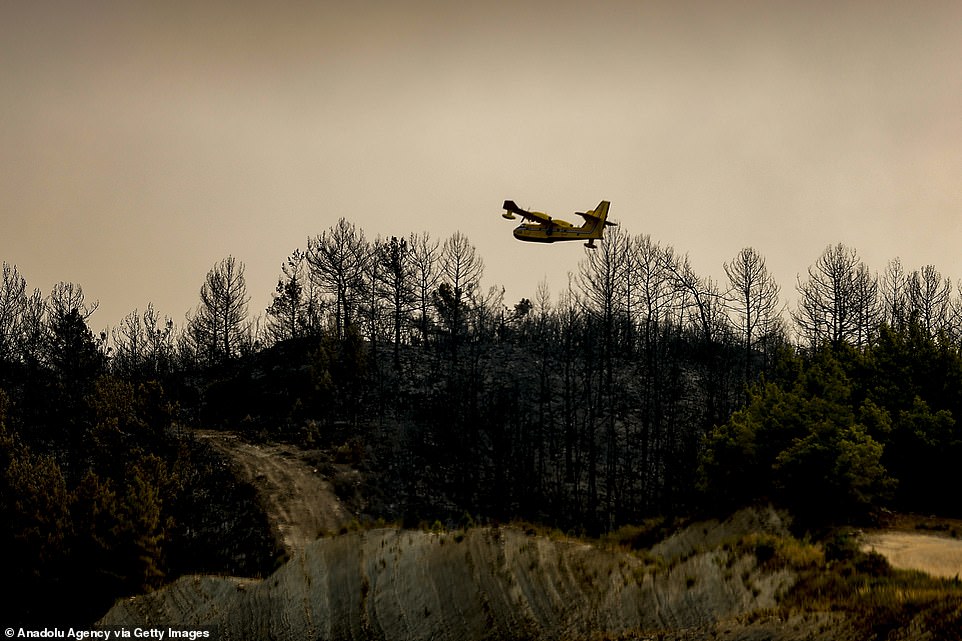 Erdogan’s government has been criticised for failing to maintain a single firefighting plane, and for failing to reach out to western nations for help with the crisis sooner