Director Spike Lee has compared the Confederate flag to Nazi swastikas as he praised the white BLM supports who would ‘make the big difference’.

The legendary New York-based film boss demanded the 13-star symbol be removed from public display along with statues of military leaders from that time.

Speaking to host Franklin Leonard on Luminary’s Black List podcast he said: ‘That flag, to me, the same way my Jewish brothers and sisters feel about the swastika, I feel about that flag,’ the BlacKkKlansman director said.

‘And them motherf**king Confederate statues need to come the f**k down.’

Lee grew up in Brooklyn in the 1960s – the time of Martin Luther King’s ‘I have a Dream Speech’ and when civil rights protests were rife.

He says this year’s protests are ‘different’. 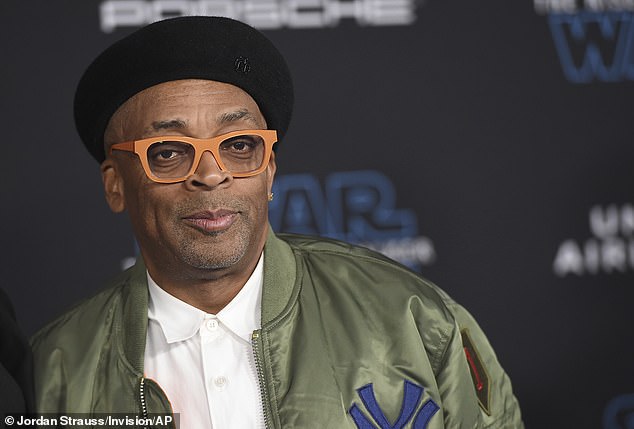 Demonstrations have been held across the world over the last two months following the death of George Floyd, an unarmed black man who died after a white police officer knelt on his neck for almost nine minutes.

‘Have you been watching CNN like I have? People are marching all over God’s Earth chanting, yelling, [and] screaming “Black lives matter”, and they’re not Black… That’s the big difference,’ he said.

The Confederacy, a group of 13 southern states which split from the US between 1861 and 1865, had a constitution that prohibited laws ‘denying or impairing the right of property in negro slaves.’

But while some view the flag as a sign of white supremacy, others claim the Confederacy was formed as a southern show of strength against increasing federal powers. They claim the flag celebrates state freedom. 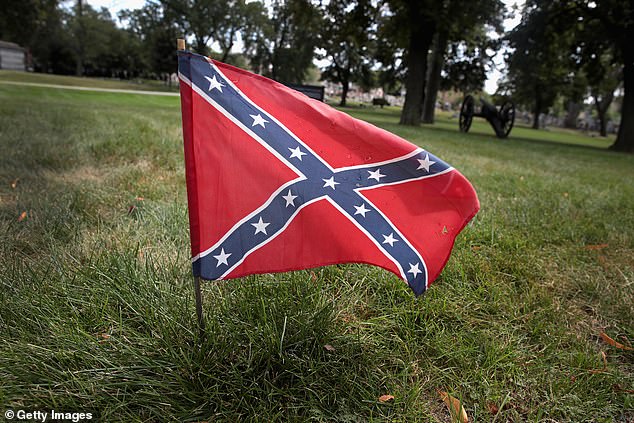 The Confederacy, a group of 13 southern states which split from the US between 1861 and 1865, had a constitution that prohibited laws ‘denying or impairing the right of property in negro slaves’

The American Civil War raged for four years before it was slowly dismantled and its members were brought back into the US fold.

Talking about his 1989 film Do The Right Thing, which ends with a riot sparked by the murder of a black man by a police officer, Lee said: ‘It’s like the film was made yesterday.’

Lee added: ‘So, there are two ways to think about it. That it’s still unique. It’s still new. And then also, Black people are still being murdered [and] dying.’

‘If you’ve seen Do the Right Thing, how can you not automatically think of Eric Garner, and then king George Floyd?’ 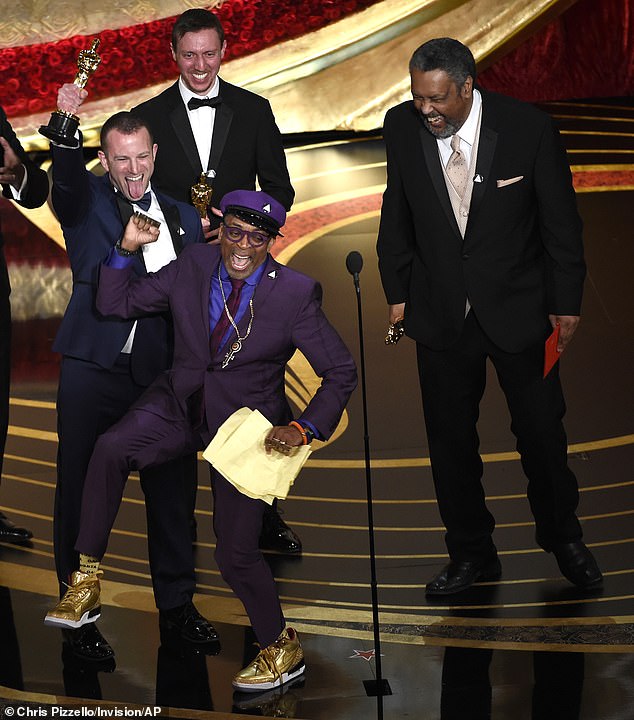 He pointed out the number of white people who have been seen holding up Black Lives Matter placards at demonstrations across the world.

Lee said now: ‘You see a young generation of my white brothers and sisters [and] they are out there in full effect. I mean, forget about the rest of the world for a second.’

‘White folks are marching in Salt Lake City [and] Des Moines, Iowa, where there ain’t no Black folks for a minute.’

The writer-director’s 2018 film BlacKkKlansman, opens with a shot from Gone with the Wind that features a tattered Confederate flag before a speech by a white supremacist played by Alec Baldwin. 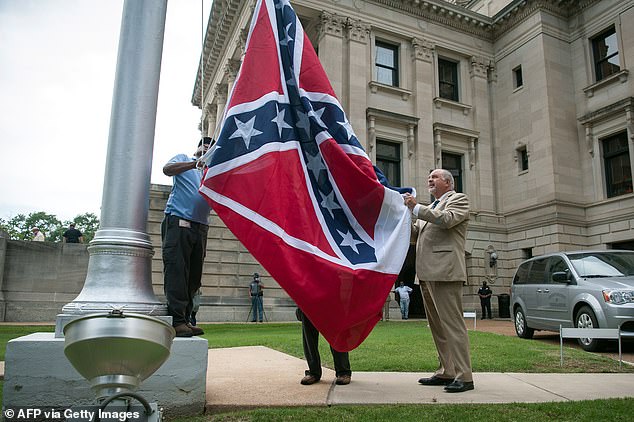 It comes after Mississippi’s state flag was retired and brought to a museum after Republican Governor Tate Reeves signed a law stripping its official status.

During a ceremony outside the Mississippi State Capitol building in Jackson on Wednesday the flag was taken down for the final time.

It was the last official US flag to bear the confederate symbol.

Lee previously revealed his thoughts on the controversial stance of ‘defunding’ the police in an interview. 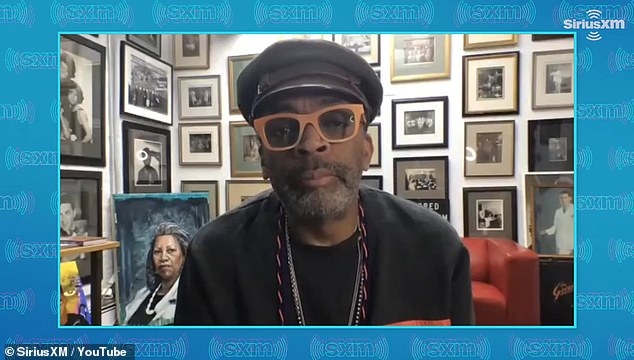 Thoughts: Filmmaker Spike Lee revealed his thoughts on the controversial stance of ‘defunding’ the police in a new interview

‘We need police! Let the record state, I’m telling my brother Al Roker we need police, but we need a police system that is just,’ Lee revealed.

‘And it’s so hard with the police unions. I mean they protect their guys, they protect that blue no matter what. And so that has to be dealt with…they have to be careful with the words because already this guy is running with that,’ he added.

The BlacKkKlansman director was referring to President Trump, or as Lee calls him, ‘Agent Orange’.

He added: ‘He’s trying to twist the narrative like they did with Kaepernick and the kneeling – trying to say that was about disrespecting the flag, but that wasn’t it at all.’ 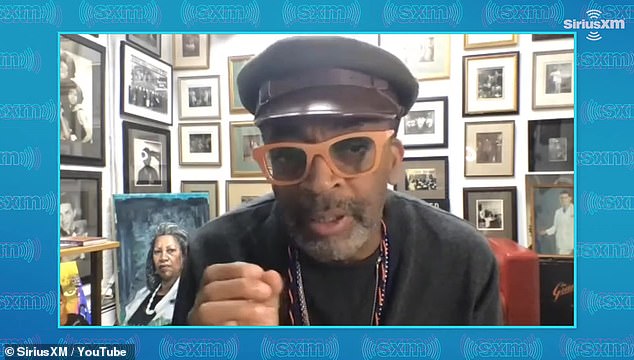 Need police: ‘We need police! Let the record state, I’m telling my brother Al Roker we need police, but we need a police system that is just,’ Lee revealed

‘We’ve got to be careful what we say because one or two wrong words, they’ll twist that thing around and the narratives change,’ he added.

For that reason, Lee said he thinks there needs to be, ‘better terminology’ than ‘defund the police’ because that has been, ‘equated to disband the police’.

Roker added that, ‘we want police, we just want a different kind of police.’

Lee said: ‘We’re at a very important point, not just in American history, but world history.

‘I think the young people, our white sisters and brothers, they’re joining us, and I haven’t seen this since I was growing up in the 60s in Brooklyn.’

The filmmaker’s new project Da 5 Bloods follows four former soldiers who fought together in the Vietnam War, who return to the country to find their squad leader’s remains, and the fortune in gold they helped him bury.