British father, 29, is left with a fractured skull and broken arms after being brutally attacked and thrown off a cliff by a gang while on holiday in Spain

A British father-of-three was left for dead after being attacked and thrown off a cliff by a gang while on holiday in Spain.

Steen Nodwell suffered a fractured skull, broken arms, a broken jaw and a shattered cheekbone after he was pursued by a group of men.

Loved ones of the 29-year-old, say he was on holiday with friends in the coastal resort of Salou on Friday night.

When Steen, of Weston-super-Mare, Somerset, was attacked by the gang leaving in need of multiple operations and stranded in a Spanish hospital in the nearby city of Tarragon. 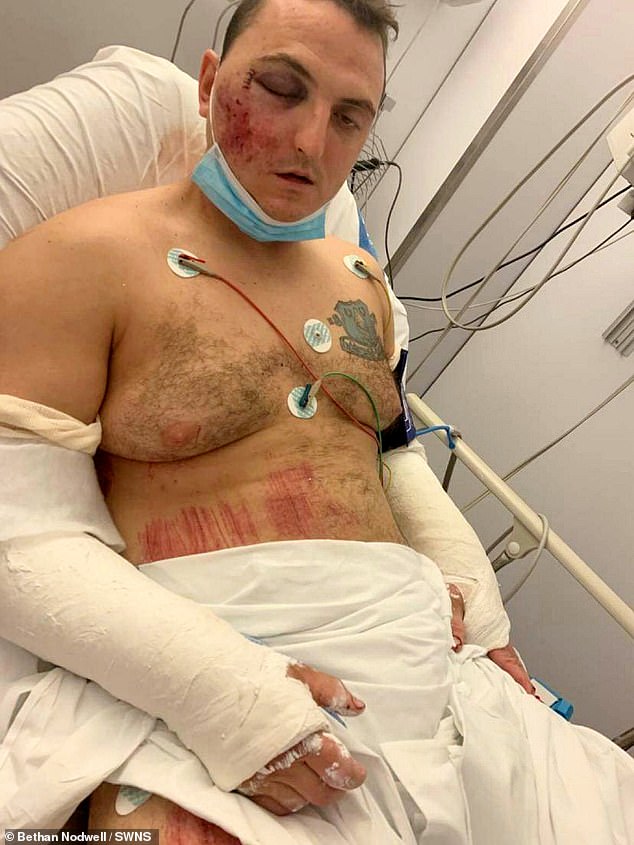 Steen Nodwell, 29, (pictured in hospital in Spain) suffered multiple injuries when he was chased by a gang on holiday in Spain and then thrown off a cliff 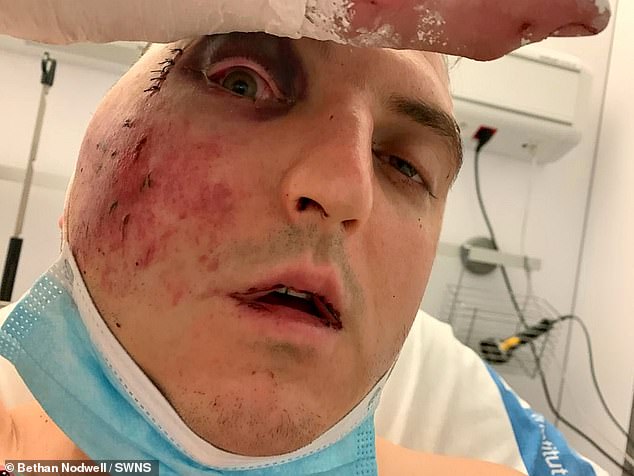 The father-of-three’s injuries include: two broken arms, one of which is a compound fracture, a broken jaw, a fractured eye socket and skull, a shattered cheekbone, internal injuries and more 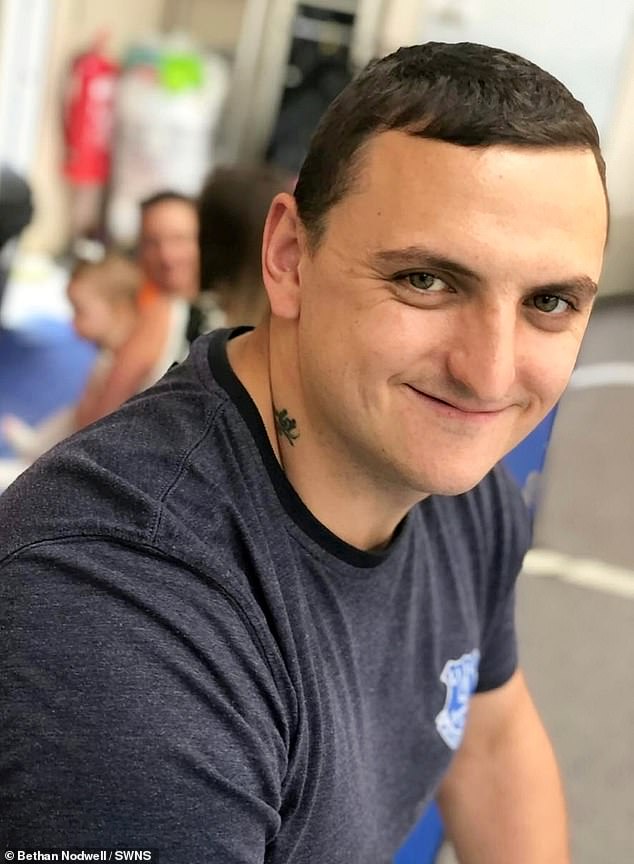 Steen’s medical insurance will only cover the cost of medical surgeries, so the family have started to raise the funds for him to be driven back as he will be unable to fly.

On a GoFundMe page, his sister Bethan said: ‘This fundraiser is in aid of my brother who was left for dead whilst holidaying in Spain.

‘Steen is a strong and determined man and this incident showcases that.

‘A gang of local men chased my brother and after brutally attacking him, they threw him off a cliff.

‘It is only through sheer determination and courage that my brother despite his life threatening injuries managed to get up and walk for help.

‘Had he not done that, the outcome could have been tragically different.

‘These men attempted to kill my brother and now we need your help.

‘Steen has two broken arms, one of which is a compound fracture, a broken jaw, a fractured eye socket and skull, a shattered cheekbone, internal injuries and more.

‘He needs several surgeries all of which are covered through his GHIC card thankfully.’ 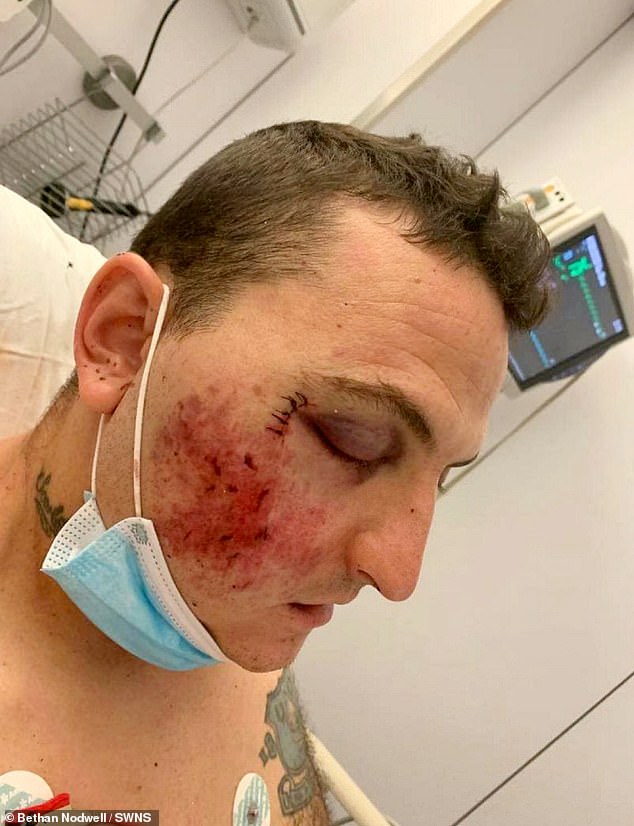 Steen’s fractured skull and eye socket are the doctors’ main concern, and they want to operate on those first in Spain 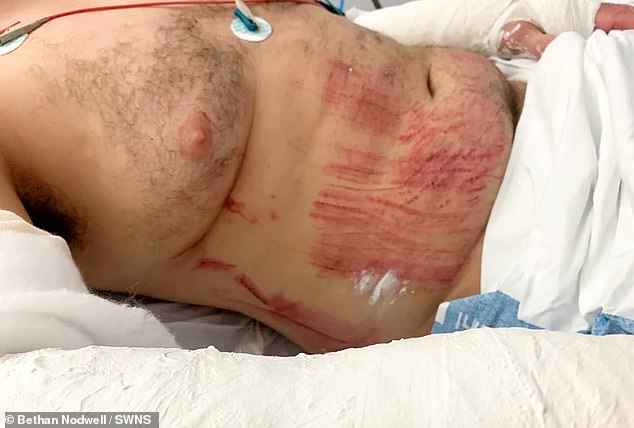 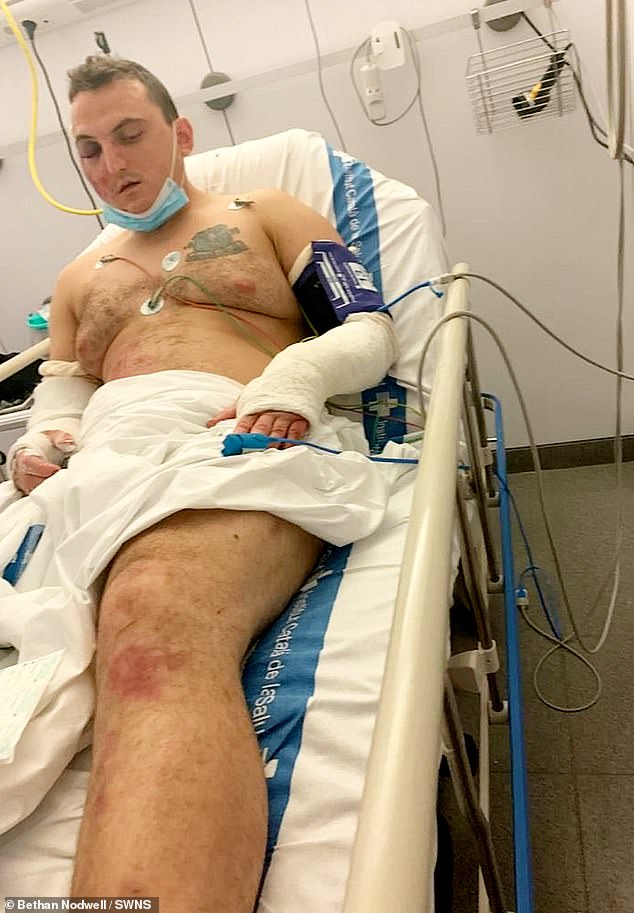 She continued: ‘However there are other expenses that we need help with.

‘Steen cannot fly home due to his injuries and won’t be able to fly for over a year (low flying not an option either).

‘It is an 18 plus hour journey that is expected to be done in a car. We need to raise funds to be able to find suitable travel with medical assistance.

‘Not only that but Steen needs help and support from his family who will need to be with him.

‘Meaning travel expenses are soon going to mount up.

‘Whether you help with a penny or a pound, every little helps. Or even a share of this fundraiser. Our family appreciates it all.

‘Anyone that knows my brother knows his strong character, I have no doubt he will handle this better than anyone I know.

‘But let’s make it as comfortable as we possibly can.

She told ITV News West Country: ‘The biggest concern is the fractured skull and eye socket. They want to operate on that first in Spain.

‘He’s got a shattered cheek bone, a broken jaw, two broken arms, internal bleeding and he needs to be seen by a neurologist to determine more.’