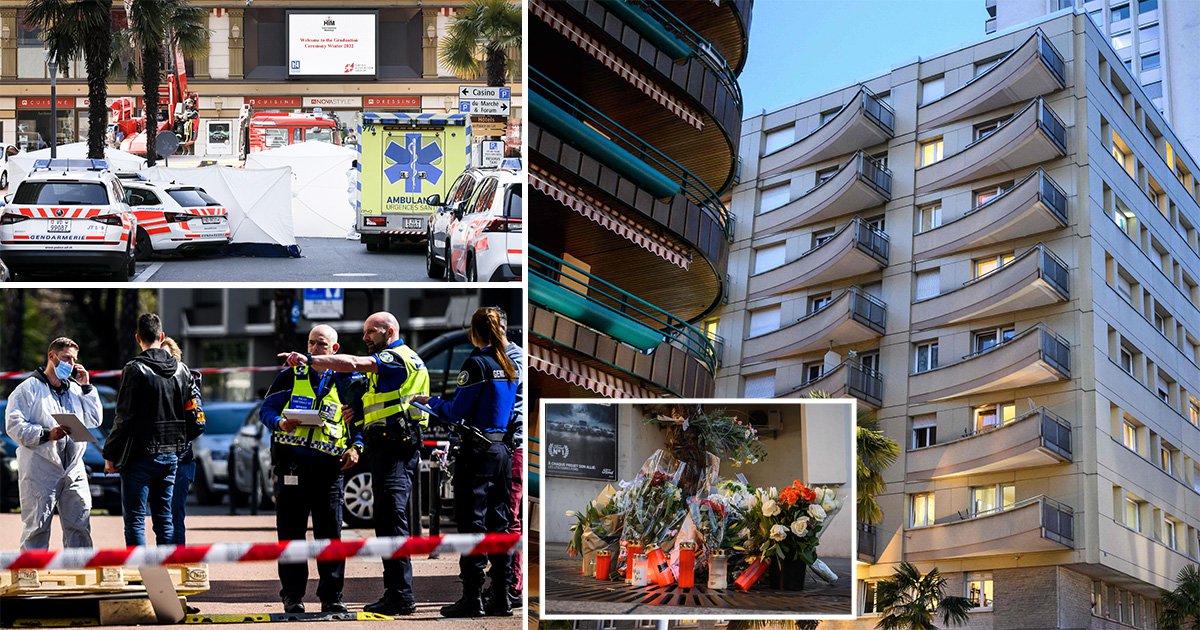 Police investigating the case of a family of conspiracy theorists who jumped to their deaths are working on the theory of ‘collective suicide’.

The tragedy in the Swiss town of Montreux last Thursday saw the deaths of a 40-year-old man, his 41-year-old wife, her twin sister and the couple’s eight-year-old daughter.

Police said the relatives plunged more than 20 metres from the balcony of their seventh-floor apartment near Lake Geneva, where they all lived ‘withdrawn from society’.

Only a 15-year-old boy – believed to be the couple’s son – survived, and remains in a coma in a stable condition in hospital.

The Vaud regional police announced yesterday their findings ‘make it possible to rule out the intervention of a third party and suggest that all the victims jumped from the balcony one after the other’.

The police confirmed the victims were all French citizens and added the family appeared to be fervent conspiracy theorists who hoarded food in their apartment.

Two officers knocked on the family’s door at 6.15am last Thursday and tried to execute a warrant in connection with the home-schooling of a child.

A voice asked who was at the door and then stopped answering, so the officers left shortly afterwards as they were unable to enter.

Then shortly before 7am all five family members jumped from the balcony within the space of five minutes.

Police said there were no signs of a struggle and a step ladder was found on the balcony.

‘Before or during the events, no witnesses, including the two police officers present on the spot from 6.15am and the passers-by at the foot of the building, heard the slightest noise or cry coming from the apartment or the balcony,’ the Vaud regional police added.

They said ‘technical investigations show no warning signs of such an act’, but noted ‘since the start of the pandemic, the family was very interested in conspiracy and survivalist theories’.

Their food stockpile was said to take up much of their living space and the mum and the eight-year-old daughter were not registered with the authorities.

‘All these elements suggest … fear of the authorities interfering in their lives,’ the police statement added.

The dad, Eric David, grew up in a wealthy part of Marseille and attended one of France’s most prestigious schools the Ecole Polytechnique, France’s Journal du Dimanche newspaper reported.

The twin sisters, Nasrine and Narjisse Feraoun, grew up in a family of five children who were all educated at the elite Lycee Henri-IV in Paris.

The mum was a dentist and her sister an eye doctor. The twins were also thought to be granddaughters of Algerian novelist Mouloud Feraoun.