The ECB will hold interest rates at record lows until next year and may restart its payments to banks to stimulate Europe’s ailing economy, it was announced yesterday. Brexit and the trade war between the US and China, and their impact on Germany, Europe’s biggest economy featured in discussions between policymakers on how to reassure the markets. Several Governing Council members, at a meeting in Vilnius, Lithuania, raised the possibility of interest rate cuts or quantitative easing, a policy meant to encourage banks to lend cheap money to businesses to boost growth and investment.

In response to the low expectations, the ECB vowed to keep its interest rates at 0 percent into the first half of 2020, instead of the end of the year, as officials had decided in March. 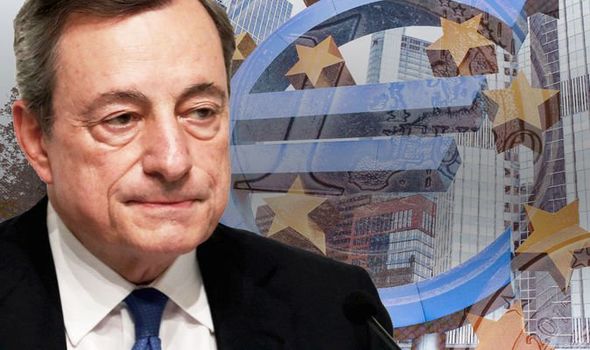 Inflation figures were also tweaked, with prices forecast to rise by 1.3 percent this year, 1.4 percent next year and 1.6 percent in 2021.

The bank has pushed for a rate of just below 2 percent but has failed to reach it since 2013.

“Turning the quantitative easing taps back on by the end of the year is an increasingly probable scenario.”

David Zahn, head of European fixed income investments at Franklin Templeton, said: “We have felt for several weeks that the ECB’s June meeting would be more significant than many commentators were expecting. And so it has proved.

“The five-year inflation expectation is below the level it was when the ECB embarked on its quantitative easing programme back in March 2015.”

Mr Draghi warned that the ECB and markets have been navigating troubled waters, and may continue to do so for many more years.

“And now we have the threat of rising protectionism, the geopolitical dangers that we have seen. We have developments in the Eurozone itself.”